Capcom Way Beyond The Black Thanks To Monster Hunter World

Capcom, the folks behind making a ton of sequels out of old properties like Street Fighter and Mega Man, just released its first quarter report for the fiscal year 2018/2019 which concluded in March 2019. To quote what they started off with their announcement:

“After closing its most profitable first quarter since the company began disclosing quarterly results, –Â Capcom aims to achieve six consecutive years of operating income growth and most profitable full-year ever.”

Big f***ing surprise; the recent Monster Hunter sequel is responsible for its current windfall. Capcom stated that the game garnered 8.3 million unit sales in total thanks to its loyal fan base and its awesome gameplay. Yeah, we loved it too because it catered to both MH noobs like myself and hardcore hunters like my other gaming buddies.

What’s also nice to know is that Capcom’s recent compilations, the Street Fighter 30th Anniversary Collection and both Mega Man X Legacy Collection, are doing alright and are outperforming expectations thanks to a loyal fan base and strong brand capabilities. It’s like as if Capcom learned its lessons from past misgivings like RE6, the Lost Planet sequels, and that Mega Man XOver mobile game bulls***.

Their current forecast and projected financial results were basically the same as what they projected back on 8 May this year. 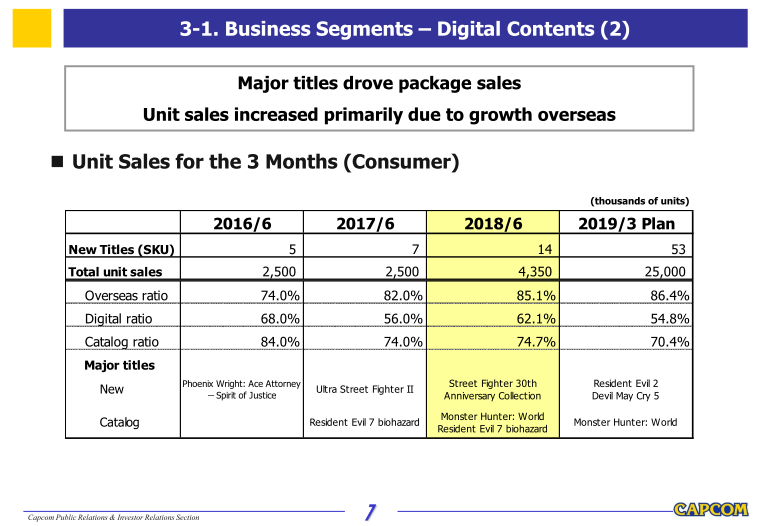 And of course, Capcom is holding high expectations for Resident Evil 2 and Devil May Cry 5. As long as there aren’t any monumental f***ups from Capcom, they should be fine.

Full presser is below; here’s the link if you’re interested.

Sales and Profit Up in Consolidated Results
for the Three Months Ended June 30, 2018
Net Sales Up 46.5%, Operating Income Up 550.8% Year-over-year
-After closing its most profitable first quarter since the company began disclosing quarterly results, Capcom aims to achieve six consecutive years of operating income growth and most profitable full-year ever-

This quarter,Â Monster Hunter: WorldÂ (released in the previous fiscal year) maintained its popularity, backed by an expanding base of fans, and achieved cumulative sales of 8.3 million units total; also in the Digital Contents business, which has continued to growth steadily in recent years, the newÂ Street Fighter 30th Anniversary CollectionÂ gave a solid performance, outperforming expectations. Further, in addition to healthy sales growth of high-margin catalog titles, the Digital Contents business drove earnings, resulting in the highest operating income for a first quarter in company history.

The forecast for the consolidated business results for the current fiscal year ending March 31, 2019 remains the same as what was projected at the financial results announcement on May 8, 2018.

3. Status of Each Operational Department

News
It's Official: Red Dead Redemption 2 Is Coming To PC

Just as we expected, the launching of the Rockstar Games Launcher was a set up for something big. We just didn't expect a set up this huge and recent....

News
Here's When You Can Pre-Load & Play Cyberpunk 2077

Cyberpunk 2077 is only one week away from its release date, and CD Projekt Red is serious about it this time. We even have worldwide preload and...

A source from The Hollywood Reporter is claiming that the next big movie adaptation for a video game is Bandai Namco's classic quarter muncher: Pac-Ma...