Dragon Quest XI Is the Best JRPG of the Current Games Generation: Here’s Why

2018 marks the 30th anniversary of the long-running Dragon Quest franchise. That’s why series creator Yuji Horii and the folks at Square Enix decided to develop Dragon Quest XI: Echoes of an Elusive AgeÂ in order to celebrate the milestone.

After playing the game for almost 107 hours and ultimately obtaining the Platinum trophy, I believe that the gameÂ is not only the best Dragon Quest game but also one of the finest JRPGs of all time.

It’s my absolute pleasure to tell you why.

In Japan, the Dragon Quest franchise’s popularity is on par with Final Fantasy. However, that’s not the case internationally. There are a few reasons for that, namely the lack of English localizations and it’s stubborn clinging to classic JRPG tropes. Most of the core gameplay from the original Dragon Quest back in 1988 has been retained, albeit refined almost to perfection.

It still features classic JRPG elements like the silent protagonist, turn-based combat, and more. Is that a good thing? Yes, it is. 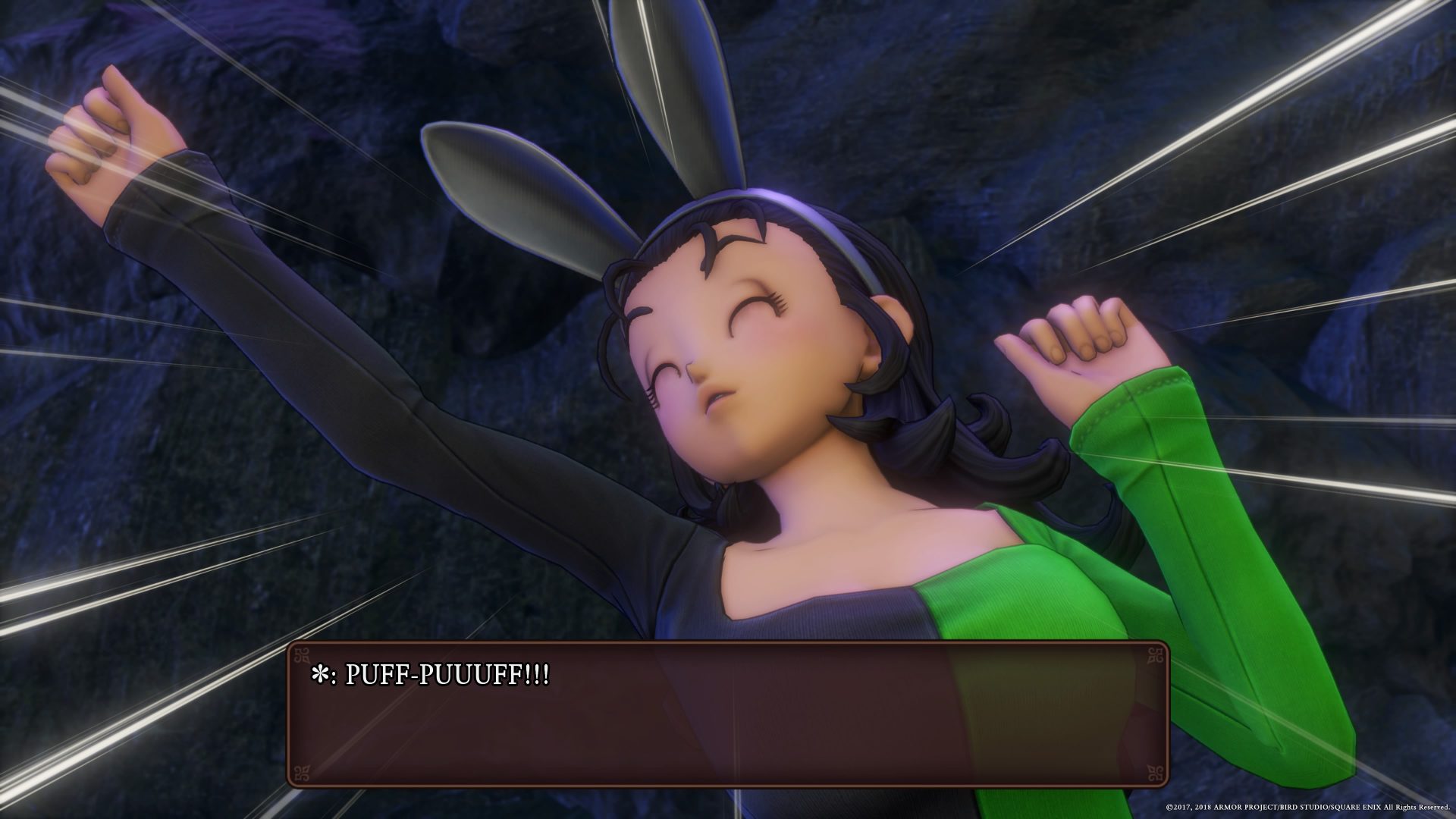 This game has girls in bunny suits!

An Oldie But A Goodie 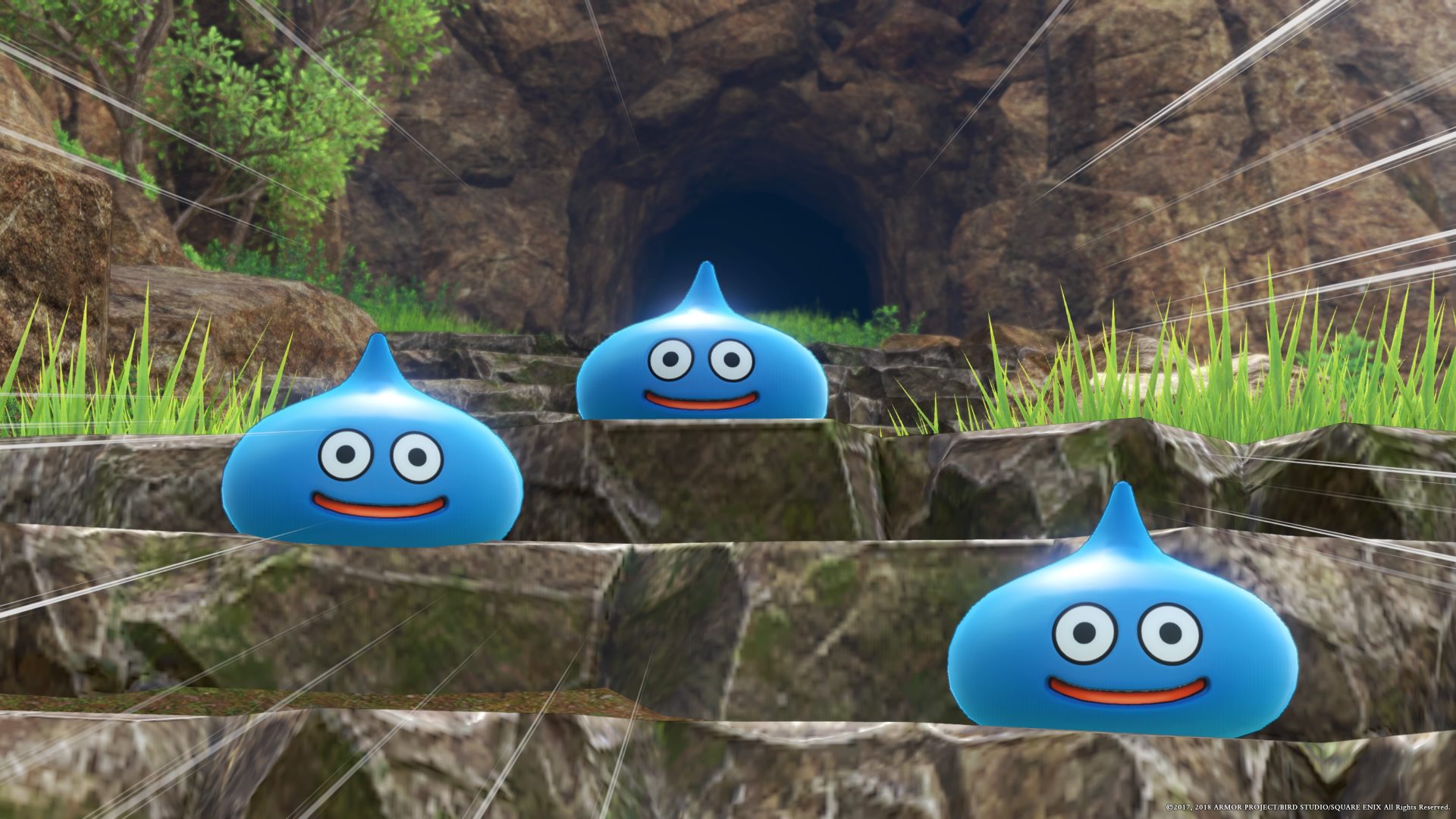 The turn-based combat in Dragon Quest XI might start out simple, but it becomes more complex as I unlocked more skill points and delved further into each character’s skill tree. With each character only being able to equip certain weapons and the limited amount of skill points available, the ability to redistribute skill points by spending coins was definitely a welcome improvement. It allowed me to change my playstyles whenever I wanted to, as long as I had the money to spare.

Besides the turn-based gameplay, the game also has several mini-games, some of which are really fun to play. I enjoyed the horse races more than I had initially anticipated, but I didn’t like the gambling games in the casino.

I might be a bit salty because I wasted hours trying to hit the jackpot (don’t judge me). The game also features a crafting mechanic that functions as a mini-game by itself. It’s called the Fun-Sized Forge and my, is it fun and addicting to use. 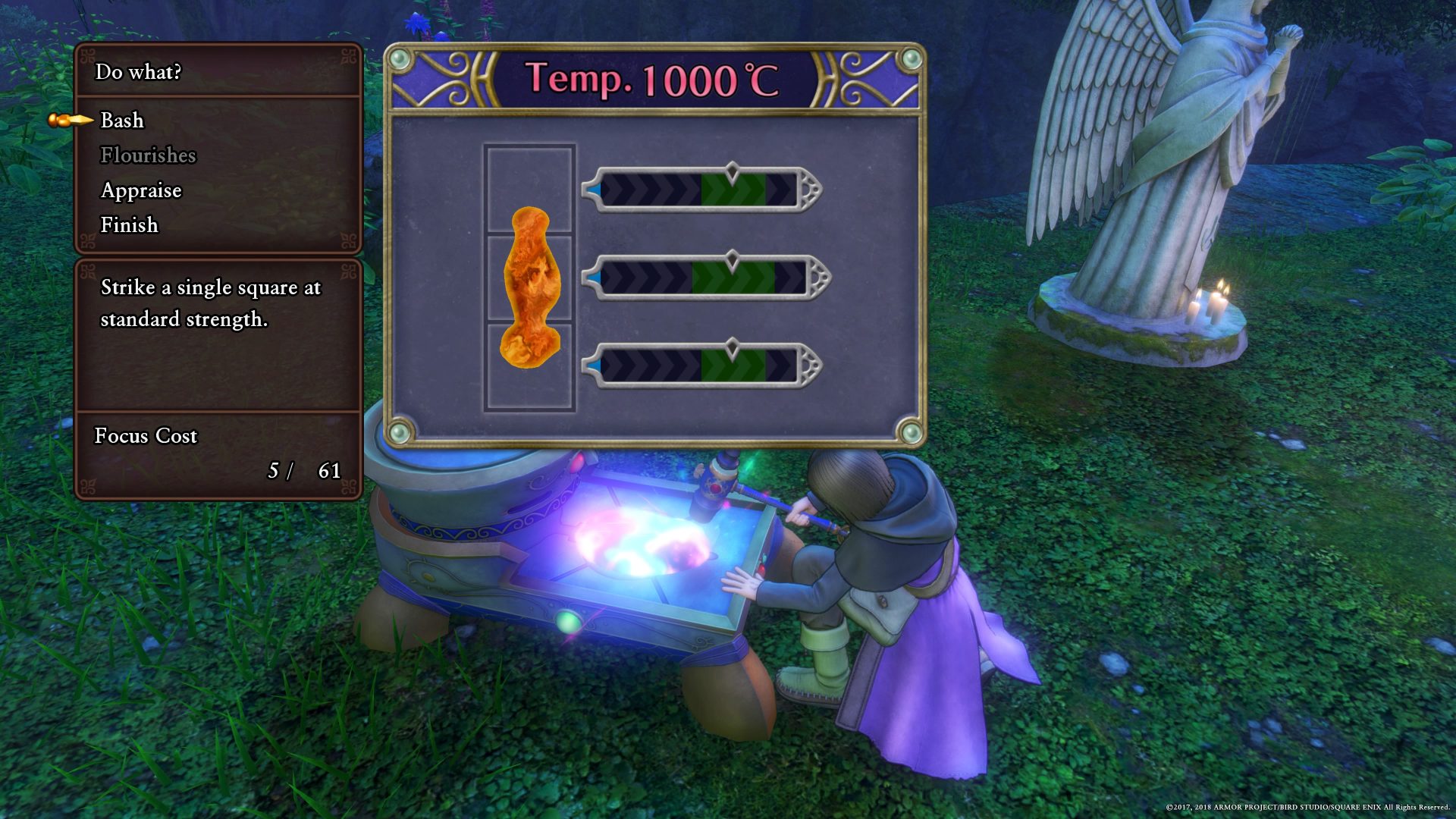 I spent a lot of time perfecting my weapons and equipment on this thing.

Lo and Behold, A Looker It Is

If you’re one of those gamers who care about graphics first and foremost, then this game is certainly a sign to behold. It’s like a cross between Persona 5 and Final Fantasy XV. Dragon Quest XI runs on Unreal Engine 4, so that means realistic environmental and lighting effects. However, those aren’t the highlight of the game’s visuals.

That honour goes to the phenomenal character and monster designs by the legendary Dragon Ball creator Akira Toriyama. The unique fusion between the two distinct art styles makes for a beautiful game which would take your breath away. Oh, and the game also has a static first-person mode that functions as a somewhat simplistic photo mode of sorts.

If you’re a fan of Dragon Ball, a lot of the character and monster designs would look familiar. The protagonist even looks like Trunks. I appreciated the developers adding a bunch of appearance-altering costumes for every character in the game, and a nice little detail in which almost every cutscene in the game will show your characters in the outfit you gave them instead of suddenly (and awkwardly) switching to their default skins like in other JRPGs. 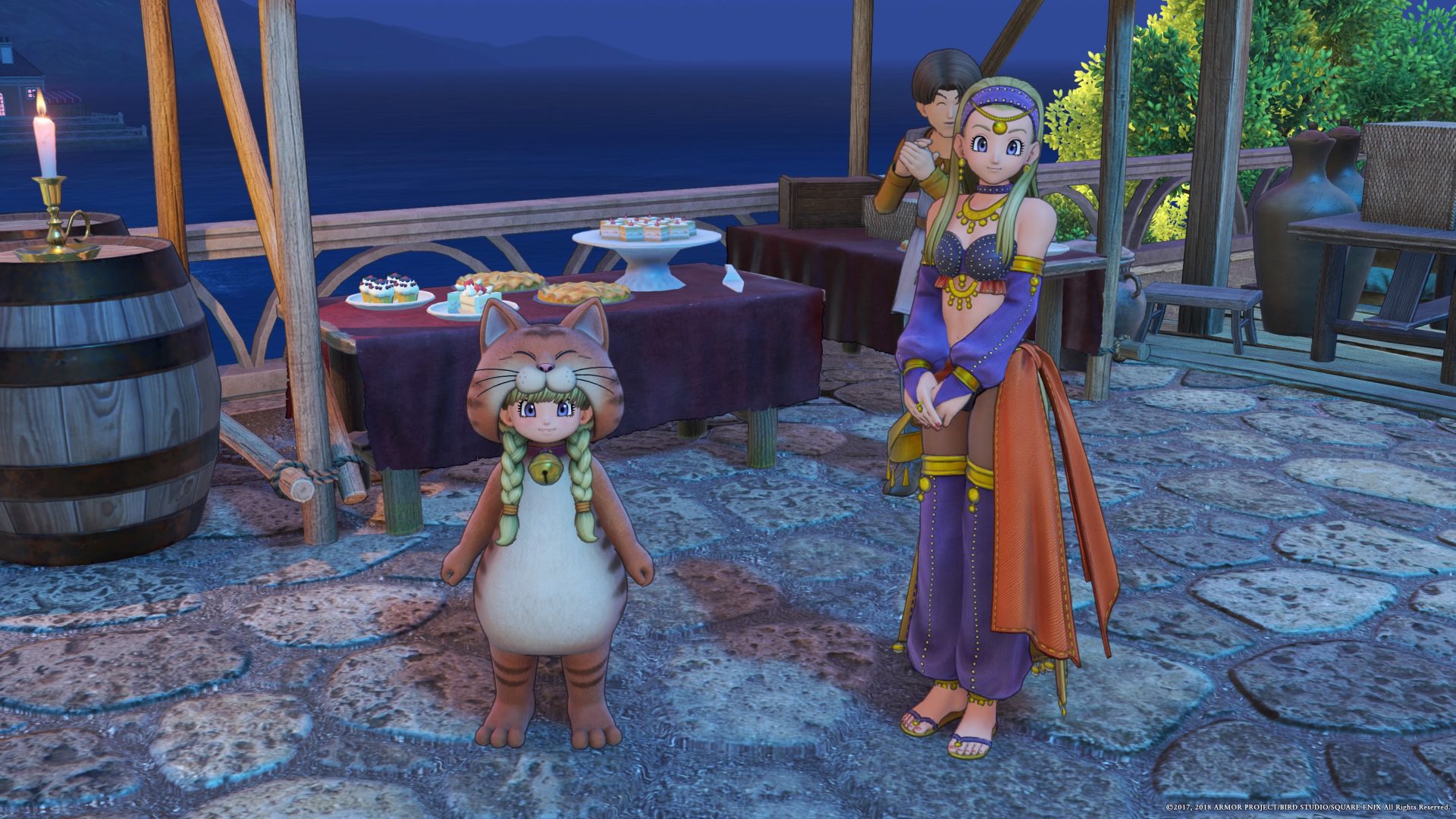 JUST LOOK AT THESE CUTE COSTUMES!

The music in Dragon Quest XI has received pretty divisive opinions amongst gamers. Personally, I loved the orchestrated soundtrack by legendary composer Koichi Sugiyama. He has composed the music for every Dragon Quest game for the past 30 years. If you grew up playing JRPGs, you’ll love the classic sound effects which accompany text scrolling, levelling up and more.

Without the nostalgic value, I understand how some would find the music and sound effects a bit too grating or annoying when it’s repeated for up to 100 hours.

The game’s score did resonate, especially during some of the more emotional gut punches in the game. Trust me, there’s a lot of those to go around in Dragon Quest XI. Prepare some tissues, and look out for one particular heartbreaking side quest involving the romance between a mermaid and a human. Ever seen Del Toro’s Oscar-winning The Shape of Water? Yeah, this is something like that. 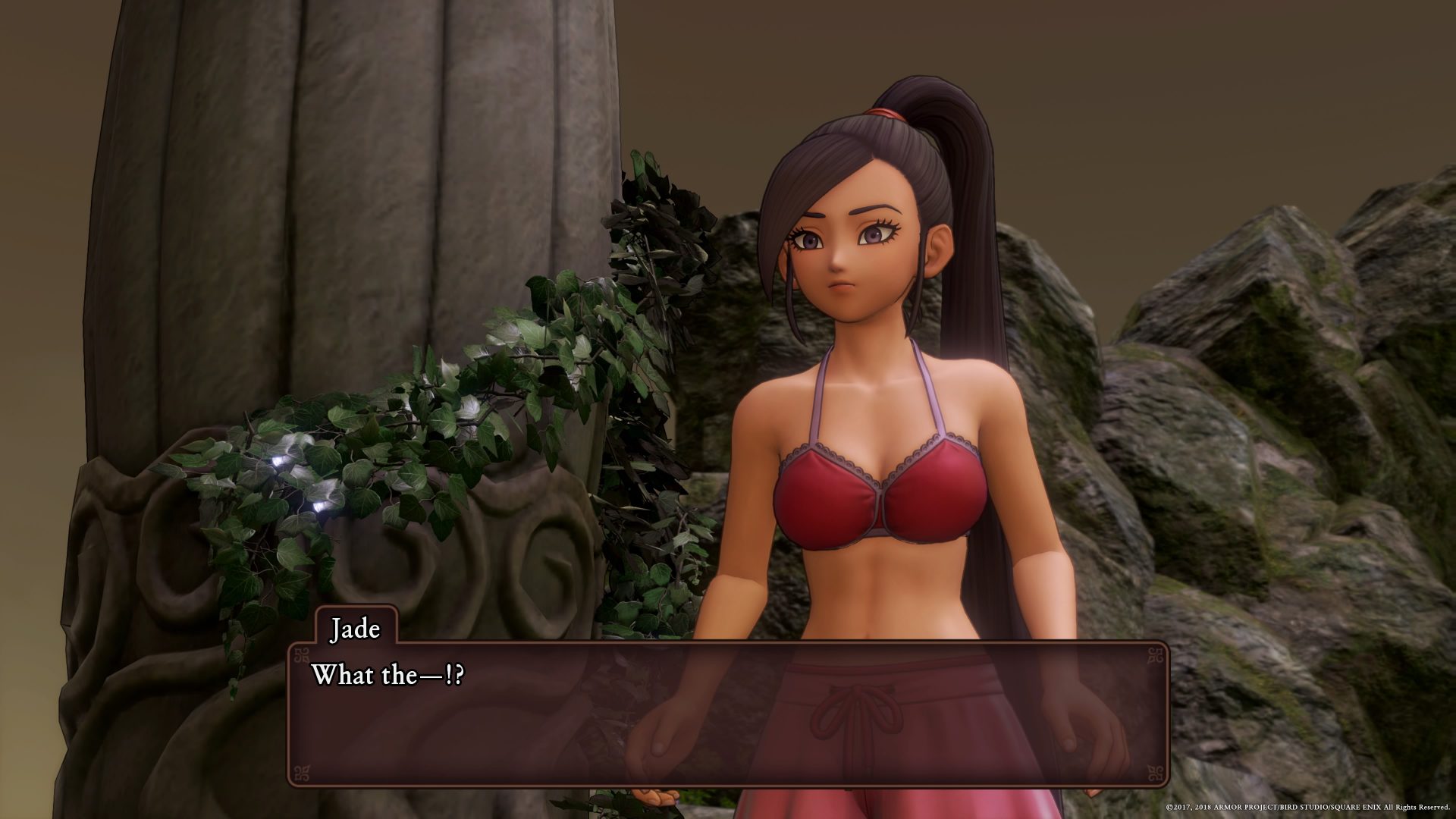 A Masterpiece of Narrative and Foreshadowing

You might have noticed by now how I haven’t elaborated much on the story and plot in Dragon Quest XI. The story is a masterpiece of storytelling and foreshadowing, fraught with twists and turns.

The overall narrative begins predictably enough, but I guarantee that several revelations will shock you. There will be several things throughout your journey that provide little hints of things to come. When those moments came, I was slack-jawed with awe.

That’s not to say that the game isn’t funny as heck. It’s filled with a quirky sense of humour that Dragon Ball fans would find close to home. The Dragon Quest franchise has always been popular for its brand of off-beat comedy, so to speak. For instance, the recurring “Puff-Puff” gag is a bit lewd but never failed to bring a naughty grin to my face.

The game also has multiple endings, with a normal ending and true ending. To reach the true ending, there’s “post-game” content. Don’t be surprised to learn that the post-game content is almost equal in size and length with the main game. I recommend everyone to continue playing after the first ending, to fully experience the game as intended by Horii and the developers.

I won’t reveal too much about what happens in the game, but the true ending is fanservice of the highest order. I mean that as a compliment, and veterans of the Dragon Quest franchise will find it endearing and a testament to three decades of Dragon Quest games.

Decked with easter eggs galore, the final “true” twist will leave you speechless and extremely satisfied. I know it did for me. It might even lead you to embark on a quest of your own and seek out past Dragon Quest titles. 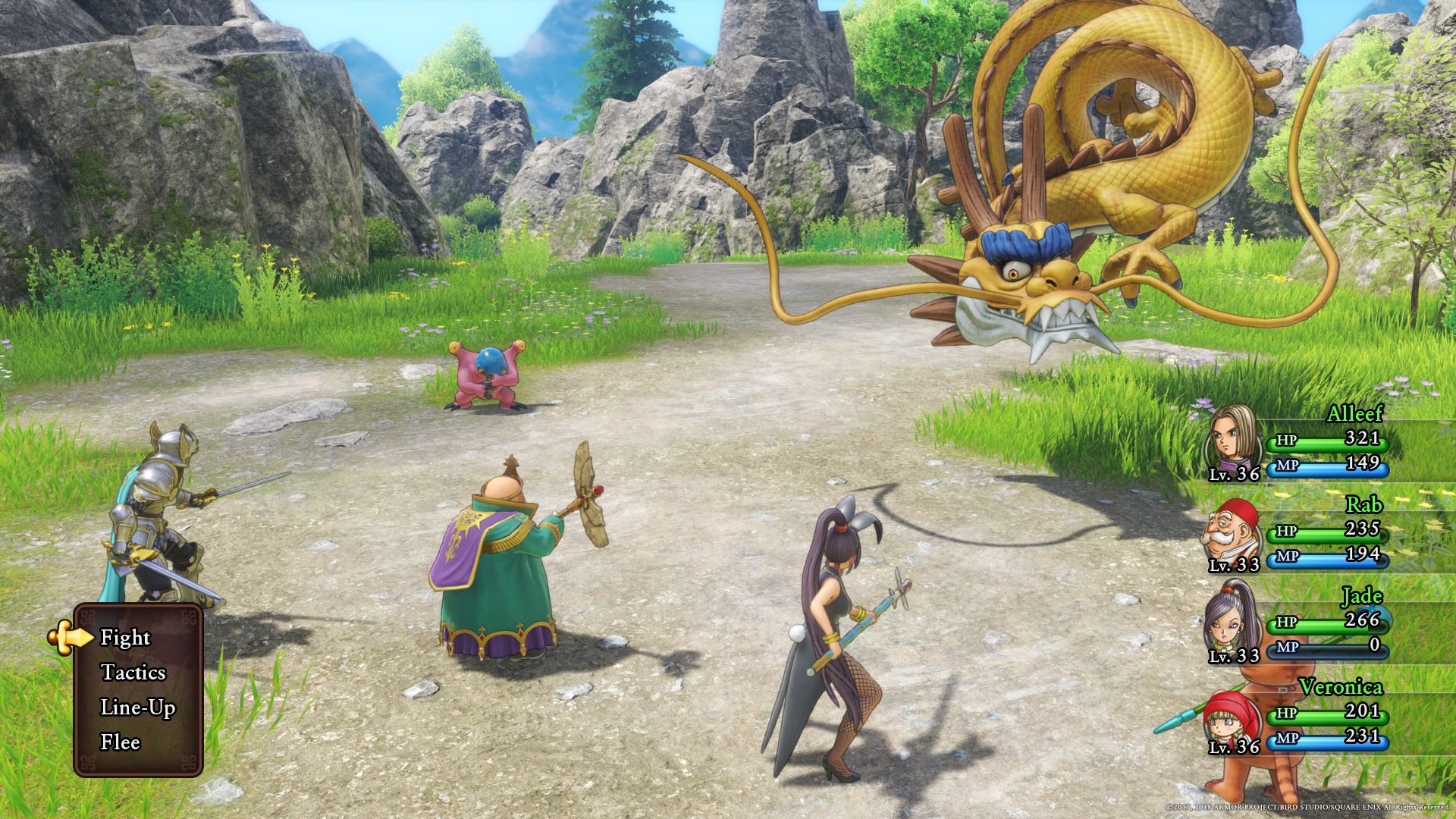 Not a Game For Everyone

Despite everything I’ve stated above, keep in mind that Dragon Quest XI is not a game for everyone. It is staunchly traditional in keeping with classic JRPG tropes that it may only appeal to the most hardcore fans of the genre. I don’t believe that to be the case because Horii and the developers have done everything in their power to make this not only the best Dragon Quest game but also the most accessible one yet.

There’s a certain charm to the game that makes it unique amongst all other modern JRPGs. The fact that the game holds so closely to traditional JRPG tropes may push some gamers away, but that’s also the reason why this game is the king of JRPGs.Â This game sets a precedent for other future JRPGs by proving that there’s nothing wrong with sticking with the classics.

If I might be so bold, Dragon Quest XI might even have perfected the genre, despite its lack of any real innovation. It’s not simply a baseless exaggeration when I say that this is the best JRPG of the current games generation.

As a conclusion, let me just say that whether you’re new to JRPGs, or veterans with literal decades of experience, do yourself a favour and play Dragon Quest XI: Echoes of an Elusive Age. It may turn out to be a 100-hour journey, but it’s a journey worth taking. 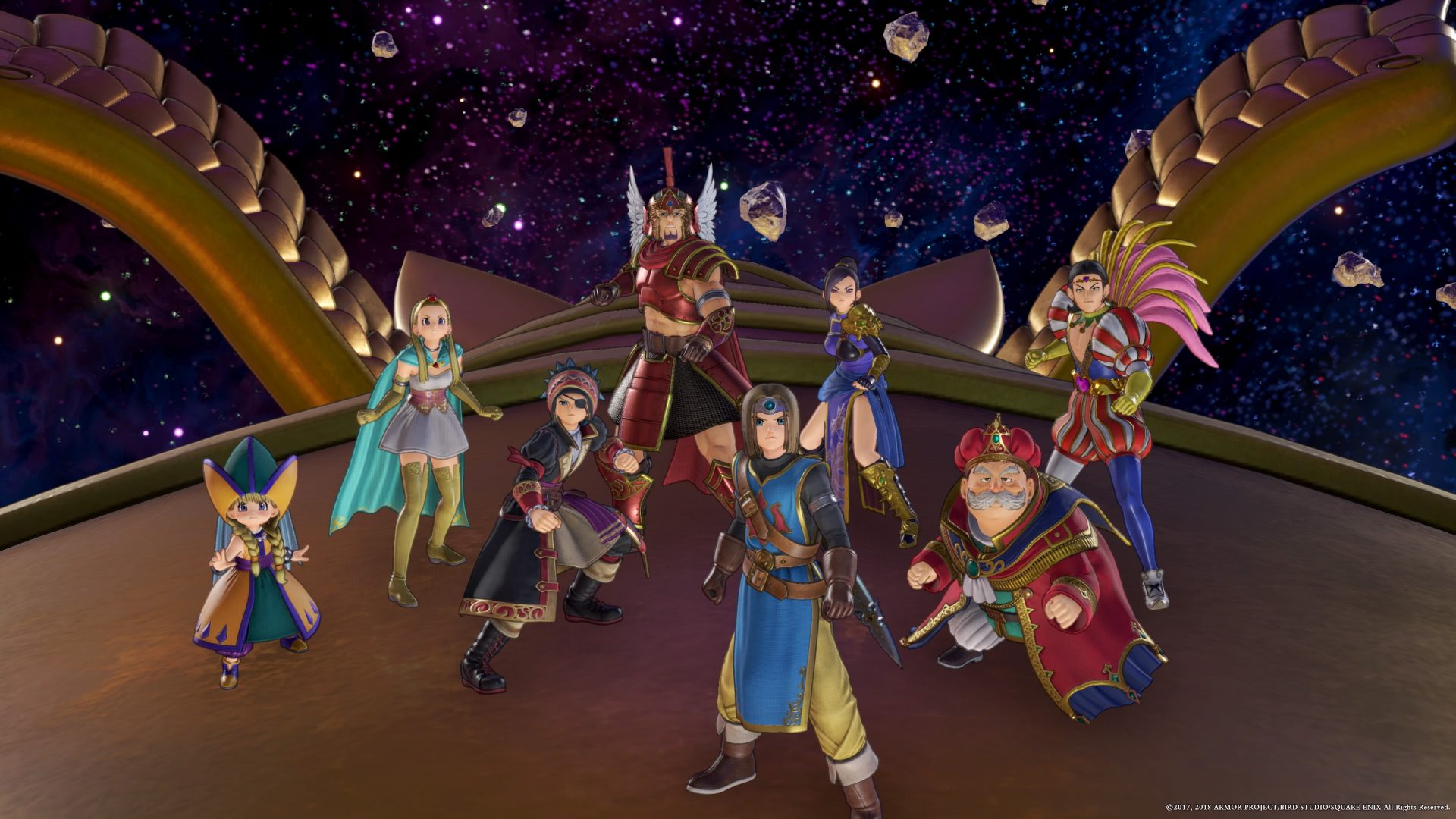 My team and Iafter 107 hours, about to face the true final boss of the game.

Disco Elysium developer ZA/UM has a bunch of new job listings that may indicate a new game is in the works. These include an open position for an Envi...

It looks like Football Manager will no longer be able to choose Manchester United as the club of their choice in the sim game franchise. Following ...

Making drinks and changing lives has always been a key factor in hit visual novel cyberpunk bartending experience VA-11 HALL-A, which you should play ...

YouTube Star PewDiePie & Marzia Announced They Are Having A Baby

TSM Reclaim Their Crown As The ALGS Split 1 Champions