Overwatch World Cup 2018 Day 2 Results: Who Else Apart From South Korea Came Out On Top?

The Overwatch World Cup 2018 Semifinals and Finals is the best, the most interesting, & most entertainingÂ series to date.

I have seen team USA throwing the biggest upset in the World Cup history. I have witnessed the rise of team China crushing the community’s perception that the China scene is not on par with the rest of the world due to Shanghai Dragons’ OWL 2018 performance. I have also experienced with my own two eyes team UK pushing a 2-draw map against South Korea.

And yes, I have watched South Korea dominating Overwatch again, despite rosters changes & less practice time. The Overwatch League may pit the best of the best against each other, but theÂ Overwatch World Cup is where the unknowns & underdogs begin to shine.

This is probably one of the best game in World Cup history that I have written, so excuse me if this match is a bit more detailed than the others.

The first rule when going into the OWWC: do not underestimate any team. At first glance, many predicted a South Korea 3 – UK 0, but UK, against all odds haveÂ pushed South Korea to their limits, pushing South Korea to a 2 map draw.

The series opened up with Ilios. Carpe showed team UK that he is the ultimate Widowmaker by sniping both Hanzo (KYB) & Widowmaker (MikeyA) who was targeting him at the same time, with ease. Carpe’s strength of easing his way throughout the entire map, together with his incredible aiming accuracy proves to be too much to handle for team UK.

Then, in the second round, South Korea suddenly went with the GOATS composition (basically a 3-Tank 2-Support 1-Brigitte team where you isolate and kill one person at a time). UK went back to spawn and they too switched to GOATS. EU Contenders scene had been all about GOATS & this is UK’s strength.

And sure enough, UK managed to take Round 2 from South Korea. I was a bit baffled by South Korea’s decision to use GOATS since we know that this is UK’s strength.

But Fleta reigned supreme as Pharah in the 3rd round. With no answer or counter, the Pharah player sent out barrage after barrage, melting out UK as soon as they reached the point. I felt like South Korea’s decision to go GOATS in the second round was simply to bait UK to use GOATS so that Fleta can counter them with Pharah.

King’s Row was a joy to watch with KYB switching to Roadhog to constantly pull Fleta’s Pharah to his demise. KYB was on a mission, and that is to protect his teammates from Fleta.

With KYB focusing on Fleta, Fusions have full control of the map & managed multiple Earthshatter moves and at one time, resulted in a team kill.Â And team UK, even though did not win, still defy the odds. They managed to draw with South Korea which is a tremendous effort against the final boss.

Carpe’s Sombra played an important role in Volkskaya Round 1. Spying on UK, who kept KYB as Roadhog to counter Fleta’s Pharah again, the whole South Korean team went back into spawn & switched to GOATS. This took UK by surprise as South Korea bulldozed all their way to point 2, completing round 1 with a massive 5 -minutes-and-15-seconds time bank.

This did not deter team UK one bit. Whatever coach Hayez did to boost the kids’ spirits, I would like to hear a piece of it. UK fought back & fought hard. They took South Korea until Round 4. Carpe dropped his Widowmaker for Hanzo and he managed to stop UK from getting the point.

But UK was not backing down; they are here to prove their worth. Fusions, with massive support from the rest of his team, managed the 5-man monster Earthshatter while KYB spring-cleaning the South Korea team as Brigitte.

At the end of the match, with South Korea’s 6 ultimates vs UK’s 5 ultimates, it was team UK’s ultimate management that saved the team from losing. Smex threw a massive 3K Smex bomb & team UK forced another draw with South Korea & the crowd went wild!

Pulling 2 draws against South Korea was an overwhelming feat for the UK that after the match, the camera was focusing on Fusions who was actually shaking & got teary-eyed post-match.

Rialto was next. South Korea started out as the attack team and with the hope of making it through until the end, was stopped short at the choke point with a forced C9, just before hitting the second point.

The crowd went wild. Could this be it? Could team UK take a map from South Korea?

UK breezed through the map during their turn to attack. But South Korea’s spark has lit up bright and true. Their ability to adapt to team UK’s play was exceptional. With 3 minutes left for UK to reach to the point of victory, South Korea managed to hold UK from reaching their dream.

South Korea made it to the final with a 2-0 win against UK. In truth, however, it was team UK who has achieved more than they have could ever dream of. The world now knows of their names & strength, including rivals like Jjonak. Congratulations, team UK, for making it into the big leagues!

Canada started out strong in the first round of Oasis. At first, it seems like China had no answer to Mangachu’s Pharah & Surefour’s Widow.Â  But then Leave made the decision to switch to McCree, shutting down Canada’s DPSes.

Canada switched to a GOATS composition but it was not a problem for Guxue’s Winston, throwing most of team Canada off the map, with the help of Yveltal’s Lucio.

In Blizzard World, China has it tough. Agilities’ Doomfist made massive plays, conveniently finishing China in one punch, so to speak. xQc tried to throw off Guxue multiple times but Guxue is a much better Winston in this series. Canada couldn’t even capture the point, leaving China a 3-0 map win.

China continued to dominate this series in Temple of Anubis. During Canada’s time to attack, China went all out & aggressive, stopping Canada at their own spawn point. The series ended with Canada barely made out of their spawn, leaving the whole team speechless post-match.

China left Canada behind 3 to 0, making their ownÂ  Overwatch history to meet South Korea in the finals.

This match was anyone’s game. It’s also important to note that this was the only series that took it up until map 5 in this year’s Blizzcon. Canada needed to compose themselves back up after a humiliating defeat to China, while UK wanted to continue breaking their own record.

Agilities was back with his Pharah prowess to get rid of UK’s notorious GOATS composition. Knowing full well that UK’s strength is both of their supports, Canada worked to split the supports from their tanks. Without them, Fusions was not able to bring out the best of his Earthshatters.

In the tiebreaker map, Lijiang, Canada showed that they are a better GOATS & more aggressive than the UK. Taking an aggressive 2-0 map win from UK, Canada stamped their top 3 placement in the World Cup. Canada didn’t make it to the finals, but they came out as the stronger team.

China made their own history by making it to the finals, going against the final boss, South Korea. South Korea brought their best of the best lineup making sure to tell the crowd that this will be easier match compare to the UK.

South Korea started out very, very strong in Ilios, never giving China a chance to even control the point. Both teams were using the same composition in the beginning, with Orisa as their main in the hopes of pulling in as many opponents into the map’s infamous well. But alas, it was a 100%-0% for two full rounds, a full hold by South Korea.

Fleta is the Brigitte that you hear people whining about for being too OP. But through all of this, South Korea was adapting to China’s play, and very well at that.

King’s Row was another mind-blowing play by South Korea. China subbed Shy with Krystal but that still couldn’t help China to break South Korea’s dominance. Fleta as Junkrat continuously trapped Kyrstal’s Genji & when Krystal switched to Pharah, Fleta as Brigitte whip shotted Krystal to death, while Krystal was still flying in the air.

Jjonak continued to be the deadly Zenyatta he was known as, having the highest damage done in King’s Row. With the stats shown in King’s Row, Jjonak could be the reason why South Korea is able to reign supreme, that they actually have 7 man-team instead of 6 like everyone else since Jjonak is a useful healer & support as well as a deadly DPS. 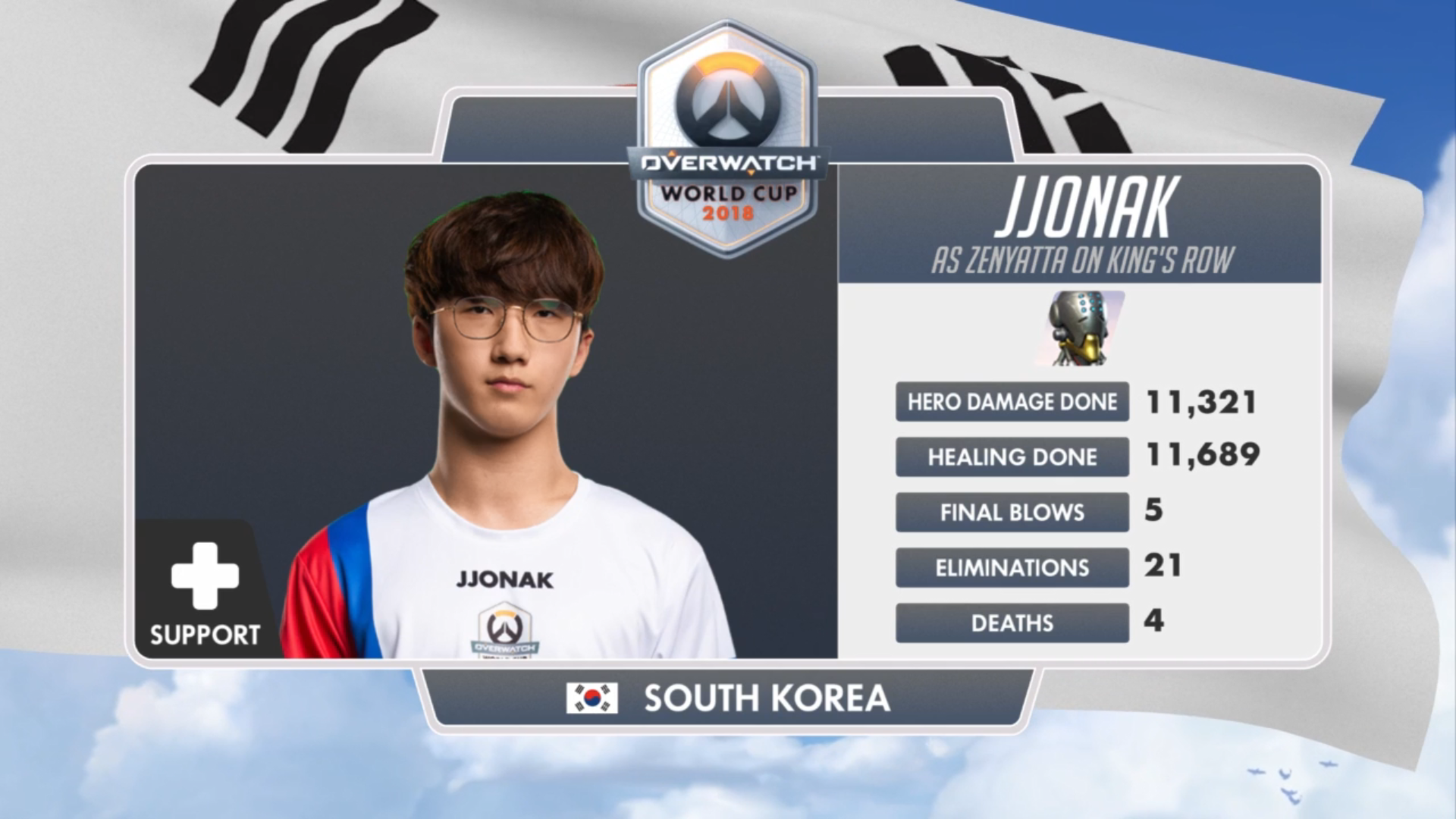 South Korea didn’t stop to dominate just there. In Temple of Anubis, China tried their hardest to make it pass the second point but South Korea rained out one ultimate after another to stop China from advancing. It was a 2-1 finish for South Korea in Anubis. 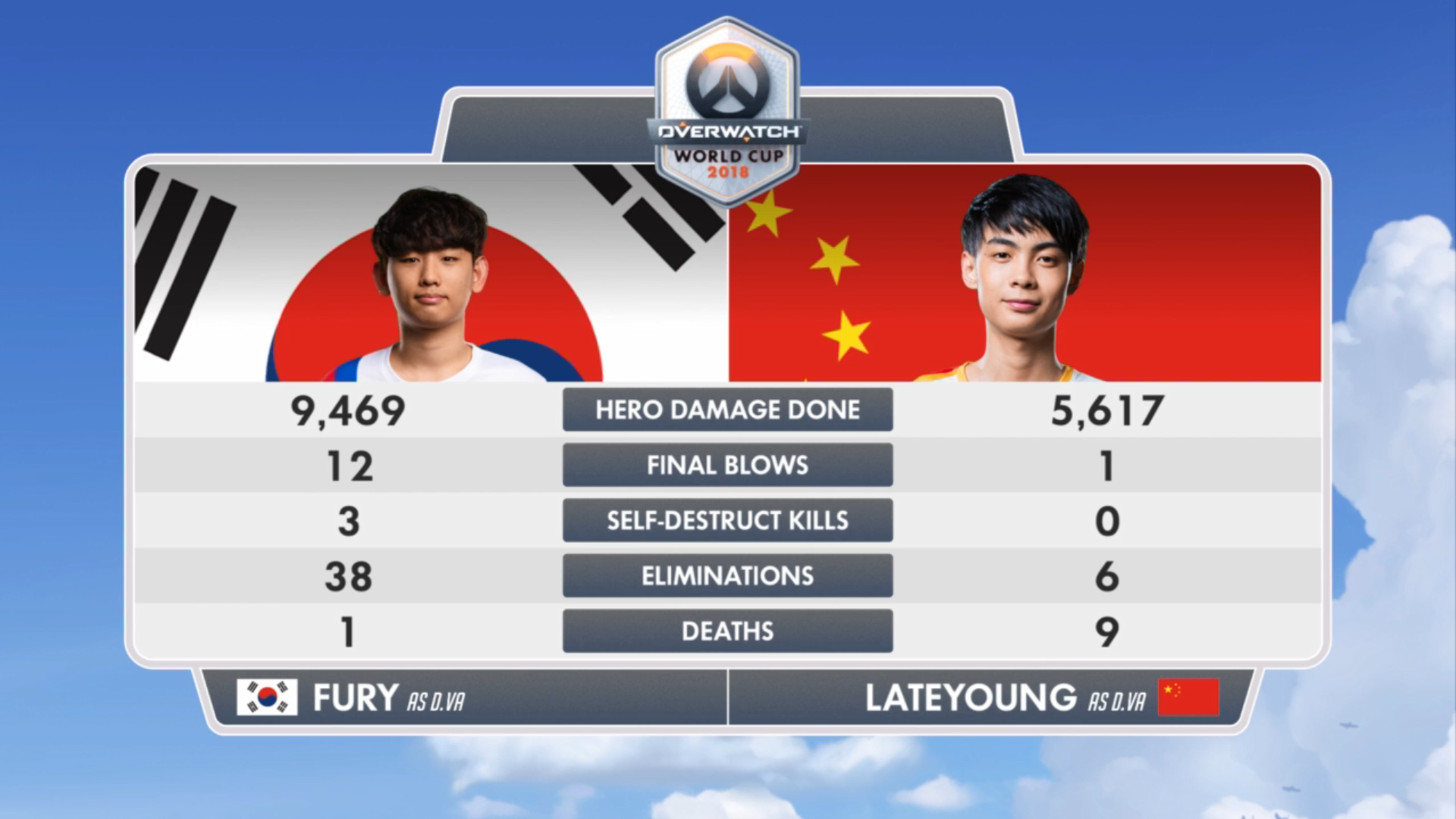 When all hope seems lost to China, the sniper duo of Shy-Krystal as Hanzo-Widowmaker seems to keep the glow back up to China. They managed to push it until Round 4 in Gibraltar. If China could win this map, they could take at least one map from South Korea. It would be a tremendous momentum for team China.

Yveltal’s outstanding survival skill as Mercy & his ability to swoop in the middle of the battlefield resurrecting Guxue’s Winston without dying at the end of the map during round 2 was essential for China to bring it until round 4.

China tried to use the classic pirate ship strategy to push the payload, which is not that far off from the starting point. But we know how South Korea’s mental strength is one of their biggest strength when it is crunch time.

Even with the payload already on its way to secure a winning point for China, South Korea managed to hold the point, sinking down the pirate ship to pieces. China came back with the GOATS composition, but it was too late for them.

After All Is Said & Done…

South Korea took the map & eventually took home the World Cup again, for the third time in a row. They have already proven time and again to be the best in the world, taking with them every single hope that other teams have, the MVP trophy, & whatever fan-made trophy the community has.

Until then, let’s look forward to the next Overwatch World Cup, as well as the Overwatch League coming soon February 2019! 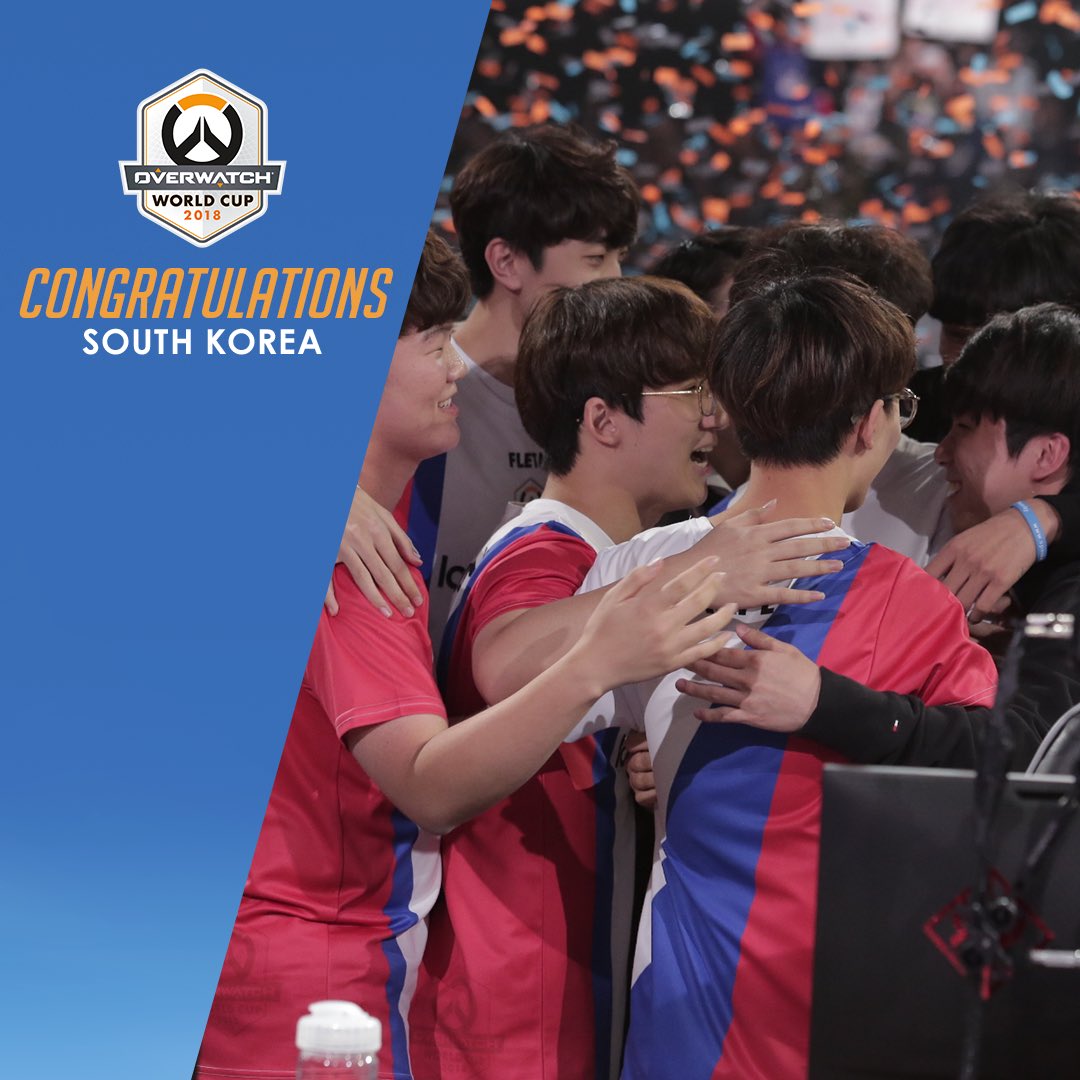 News,Tournaments
Uprising & Fusion Shine In A Day of Upsets

It was a day of upsets as both 'Korean Teams' in the form of London Spitfire & New York Excel falling in five sets to their respective opponents, ...