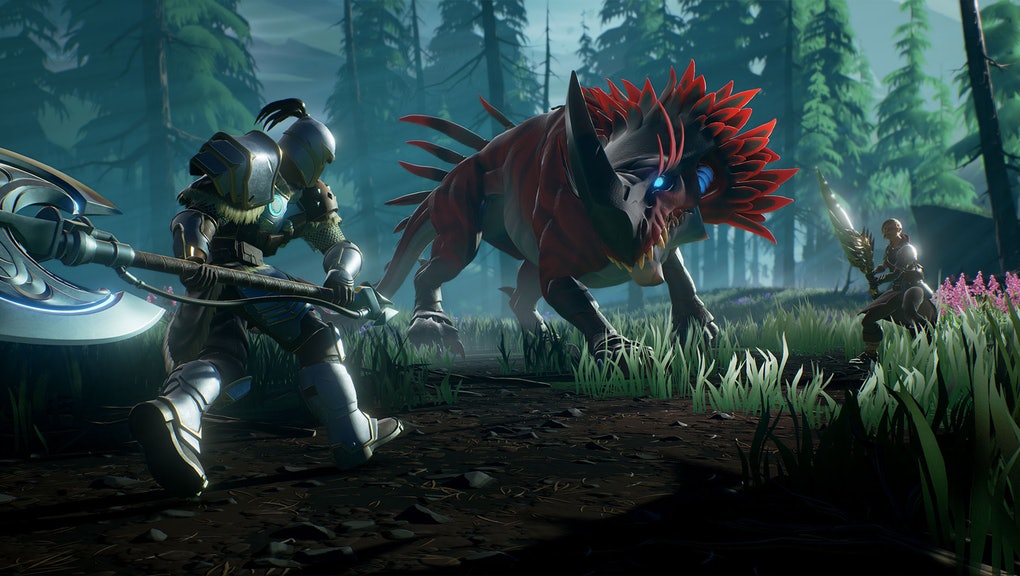 Dauntless is a free PC game on Steam that fills in a niche that was sorely needed: an action RPG-like game focused on hunting big game that can trash you in a few hits. Unfortunately, that field may have been dominated early by the PC version of Capcom’s Monster Hunter entry.

But I digress; there’s still some room for something like Dauntless, and I’ll tell you why.

Playing through the most recent “final” version of the game, I felt that the game is meaty enough to warrant spending money on. Its character customization is surprisingly deep, its combat system is flexible to get into, and the fights tether on the line between fun and creative.

The latter point escalates especially when you’re fighting against bigger low-level enemies like the owlbear Shrike. It flings tornadoes, does a ground pound after leaping into the air, and can be a mother to beat unless you have three other hunters with you. The bulky lizard Skarn can have its rocky outer shell float around as a fighting move. Watch out when its rocks start snapping off of its body; it’ll unleash a whirlwind vortex-like move that will deal massive damage.

The fact that your weapons and skillset aren’t as animation-heavy as other big game hunting titles is a boon for players who want a slick action game with literal giant challenges to test against.

Due to its pacing, Dauntless is a quicker alternative where you get in, kill the beast(s), and then get out.

This is assuming the servers don’t konk out along the way, of course. And boy does that happen when you’re playing all the way in sunny Southeast Asia. When you’re playing by yourself, it can get a bit dicey. But when you’re looking for three other people, you can expect to wait longer than 5 minutes because its matchmaking needs a lot of fine-tuning.

And then we have to address the elephant in the room: the fact that Monster Hunter: World exists on PC. Dauntless is a free-to-play title that offers a lot in the action game genre, but because of Capcom’s brand, people are alright with forking over RM200 (or less) for a game you can play offline and online that offers plenty more.

As fun as Dauntless’ combat system is, it isn’t going to win when it comes to the risk/reward and the sheer complexity of MHW. MHW’s weapons require a lot of patience in learning their nuances; that’s why videos like players using the insect glaive and charge blade get more love than past Dauntless gameplay vids during beta.

The commitment levels in MHW is also noteworthy; it means that the game demands attention from its players and rewards them for it. It may not be a drive-by experience like Dauntless (which can be a boon for some), but it makes sure you enjoy the thrill ride of pursuing a beast of burden.

That’s not to say there isn’t any value in Dauntless; think of it as a basic MH-style game you can jump into a few weeks after all of its network bugs have been ironed out.

The game’s aesthetics are still brilliant, and just wailing on its giant bestiary with other people is a ton of fun and isn’t as time-consuming and attention-demanding as MH.

But once the initial few weeks of fun are over, and you want something a bit more substantial, you should be ready to plonk in US$60 for that copy of MHW.

It’s not an insult to shelve Dauntless as the beginner-level Monster Hunter clone. I feel that it’s impressive that it’s gotten this far from its beta days up until now where it has a year or so to prove itself.

Sony Is Listening To Negative Feedback On Party Chat Changes