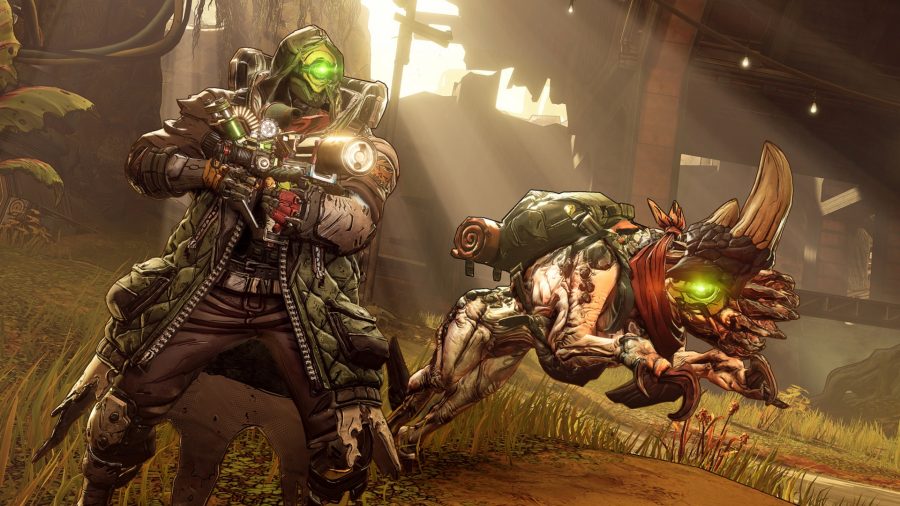 After checking out that sweet Borderlands 3 gameplay during the Gearbox Software event, it’s safe to say that loot-and-shoot fans will have a heckaton of fun with the game when it’s out 13 September.

So what’s new and what’s welcome? What can we expect from this co-op shooter? A lot, actually. Let’s break it down.

You’re dealing with an all-new threat

We got snippets of the antagonists of Borderlands 3, but now we have full confirmation: you’ll be fighting the Children of the Vault leaders Troy and Tyreen Calypso. They have a douchey livestreamer persona that somehow earned them psychopath and bandit followers. You have to stop them from leeching powers from whatever interdimensional beast(s) that resides inside Vaults.

Your Vault Hunter is now serving the Crimson Raiders

Lilith, the Siren from the first game, is now leading the Crimson Raiders. You basically will be doing missions for her along with the loveable bot Claptrap. Right now, you’re tasked with finding vault keys to open up new ones in Pandora.

In addition to the main campaign, you also will get to partake in many sidequests for loot and experience. Here’s what we gathered so far:

Remember the non-sequiturs and crazy humour in the second game? It’s toned down this time around. Sure, ClapTrap is still his slapstick-attracting self. And then there are some off-kilter moments like installing a bloodbag on an annoying NPC by meleeing his arm off.

However, the new game is going for a more subtle approach with its humour. Well, as subtle as a game that lets you guide rockets with a pointer or dealing with psychopathic midgets.

You’ll get more helpful NPCs during missions, with some of them even able to revive you when you are in Fight for your Life mode (ie: when you’re down but not out yet).

You can ride a spaceship to other worlds

For the first time in the series, you can now visit other planets apart from Pandora. You do this by using the Sanctuary III ship which is your main hub to get around. All NPCs from Borderlands like Marcus and Ellie will be around to help you out.

So far the only new planet to visit is Promethea, where a war between gun manufacturers Atlas and Maliwan is taking place. They’ll be other planets; we’ll have to wait for the full game or subsequent previews to find out more.

Also, it’s great DLC fodder post-release, if Borderlands 1 and 2’s expansions are of any indication.

The game is slowly turning into GTA…

…in a sense that you can now hijack vehicles. You could only drive your own Bandit Technical and ride in past games; now you can steal cars and salvage their parts in the nearest Catch-A-Ride station. Take those salvaged parts and pimp your main ride to become the ultimate Technical. Vehicular manslaughter in Pandora has never been this fun and expansive!

Vault Hunters can select between 3 skills to use

Just like past games, each Vault Hunter has a skill that sets them apart from the rest. But this time it’s handled a little differently. Now you have not one, not two, but THREE different skills to play around with.

For example, Amara the new Siren has the following:

Zane the Operative is the only Vault Hunter who can use two skills at once. Here are his skills:

If you want a full breakdown of Amara and Zane’s skills, head here.Â

Your Vault Hunter can talk to people, albeit in short spurts

Your characters can now say a few lines to NPCs when needed. This adds a bit of life and colour to the game’s narrative. It’s nothing major, but it’s a nice immersive touch.

You can slide, climb ledges, AND push barrels

Your Vault Hunter is a bit more mobile and flexible. For the first time in forever, you can slide Apex Legends-style, and climb over ledges. Talk about improving the pacing and speed of combat to contend against other shooters in this generation! This is pretty important since cover is now destructible; you’ll need to sprint around and get to better cover and higher ground to stay alive.

Your melee attack now pushes explosive/elemental barrels away from you so that you can detonate them onto enemies. No more accidental deaths via barrels! Unless the new Siren has a phoenix-like ability in which case you may need to respec.

To open up new gun-firing possibilities, every gun in Borderlands 3 has alt-fire modes. For instance, your regular Vladof handgun can fire micromissiles or grenades if you switch to its alt-fire mode.

Oh and here are a few manufacturer tidbits:

It goes without saying that the gunplay is heavily improved. It’s akin to playing DestinyÂ and Destiny 2, what with the firing mechanisms, feedback, recoil, and enemy reactions for each different gun, rifle, and shotgun in the game.

Two optional features new to Borderlands 3 are loot instancing and level-balancing. Co-op players can turn this feature on so that they can get loot scaled to their level. You can also have games scaled to the host’s level so that your level 25 Vault Hunter will have an equal challenge in a level 10 Vault Hunter’s stage.

If you don’t like that, don’t worry: Vault Hunters can opt for Classic Mode so you can power-level your friends and make their ride a little less bumpy.

Rather than having players gun down bosses quick like in Borderlands 1 and 2, Gearbox is adding a bit of a twist in the third game. Bosses will sometimes have their health greyed out and will become invincible so that players will have to dodge and avoid their attacks and “gimmicks”. For instance, fighting the bandit Mouthpiece requires you to dodge amplifier turret soundwaves while he’s in “defense” mode.

This may slow down the pace of the fights at times, but we figured Gearbox want their bosses to have a bit more oomph in their battles against players.

There’s a Lost-And-Found machine in your ship

Lost some loot while playing the game? Fear not; the game now has a machine that collects lost loot from past playthroughs in your main hub. You don’t have to go back to the last planet or location to sift for goodies anymore!

You can play this game offline

Whether it’s co-op or single-player, Borderlands 3 marks the first-ever loot-and-shoot game in years where you don’t need a persistent internet connection to play the game from start to finish. And we wouldn’t have it any other way.

We’ll be sure to update this preview page with more tidbits, but so far this game is shaping up to be more badass than your Destiny titles and The Division pretenders to the throne. Borderlands 3 will be out 13th September.

by We’re Not Getting New Borderlands 3 Vault Hunters In DLC; Here’s Why – KAKUCHOPUREI.COM in May 7, 2019
Reply

[…] 13 September for PS4, Xbox One, and PC. If you want to find out more about how the game plays like, check out our preview,Â or check out the skill trees of Amara and […]