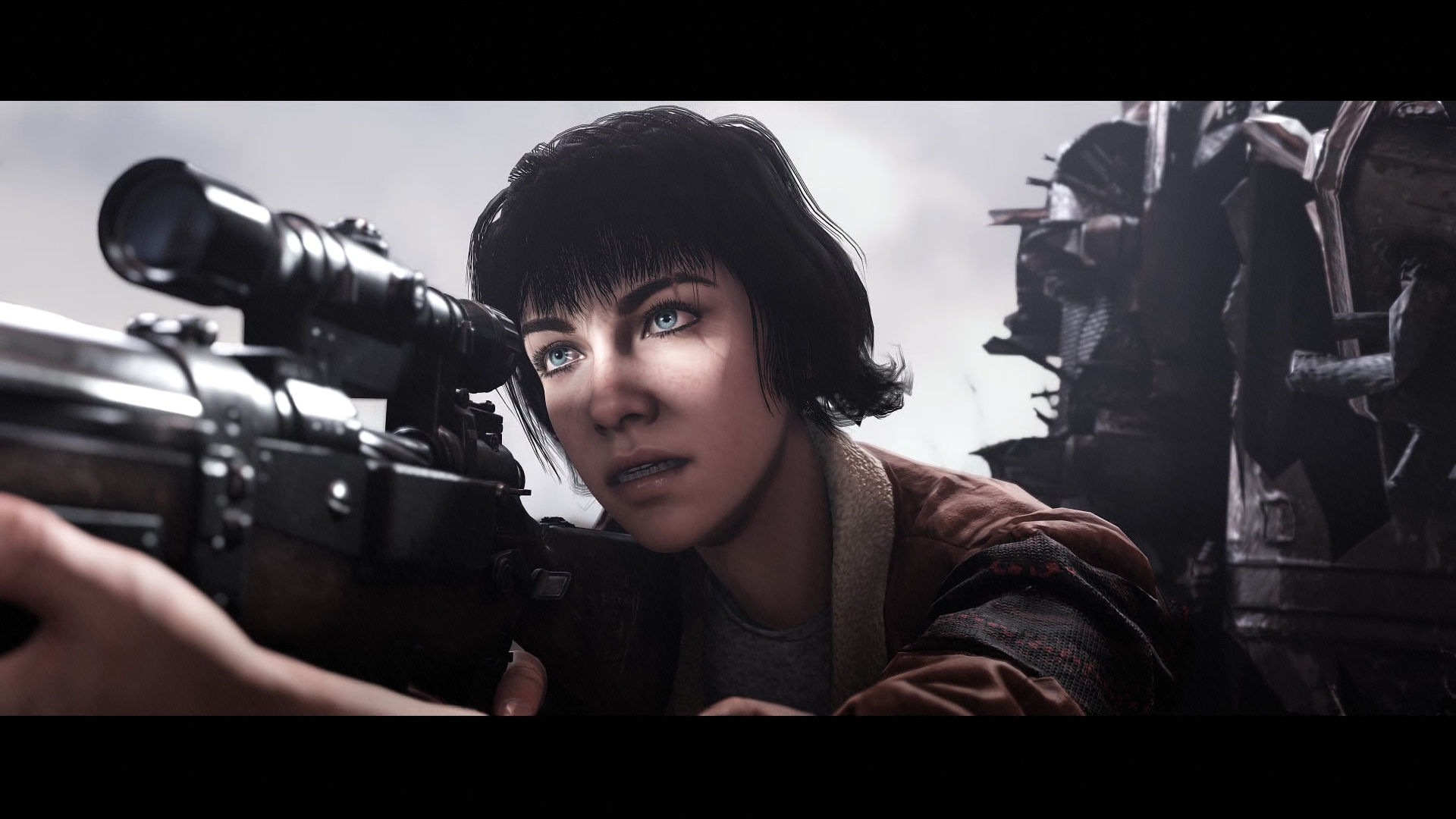 In this Wolfenstein sequel, you play as one of the twin daughters of B.J. Blazkowicz, the man who killed Adolf Hitler. You get a super-suit that allows you to become invisible, jump around like you’ve got pogo sticks for legs, and run into enemies with the sturdiness of a brick wall. Your job is simple: Find your missing dad and kill every single Nazi that gets in your way. And you can do it all with a buddy!

With a premise that awesome, I approached Wolfenstein: Youngblood with an optimistic outlook of “What can go wrong?”

Let’s start with what Youngblood does right because there’s not much. The shooting is pretty decent. Most guns feel pretty good and it’s quite satisfying every time you put a bullet in a Nazi soldier. My personal favourite is the Kugelgewehr which is the game’s automatic shotgun. I can feel a little elevated every time I fire that baby.

There’s also a bunch of other quirky and cooler weapons like a laser rifle and a lightning gun but they’re handicapped by the fact that you never really feel the need to use them except for opening doors and boxes. I’ll explain this in a bit.

When it comes to visuals, the game can go from looking a bit bland to being outright gorgeous. Particle effects from laser weapons and the overall lighting are done really well. The way your weapons look and the designs of the Nazi troops and mechs are all just plain awesome. There’s not much to complain here; they did a great job.

The soundwork is just okay. None of the music really stuck with me. in fact, all I remember is some of the catchy German songs that you’d find being played in the Nazi’s bedrooms. Except for the two main characters, I found that the voice acting was pretty good for the other four or five other major characters. The other NPCs only existed to give you side missions and they’re forgettable at best.

You don’t have to worry about the game’s atmosphere. The city of Neu-Paris is wonderfully decorated with bright red Nazi banners and flags and you’ll always be hearing a Nazi commander dishing out orders or just having a chat in stylistically oppressive German tones. It’s Nazi-occupied Europe and the game never fails to remind you that.

But Now With A Friend!

Youngblood’s game-changer is supposed to be its co-op feature. The idea that you and a pal will liberate Neu-Paris from the clutches of Nazi scum is something that probably everyone would love. Truth be told, the game can actually be fun with a friend; shooting Nazis in tandem, covering each other’s back while buffing each other with the pep bonus.

But what happens when your friend is unavailable or you’re simply one of those people who’d rather play with an A.I.? Well, that’s at least 80% of the game’s enjoyment gone. The A.I. doesn’t do a horrible job of keeping out of your way and simultaneously holding her own against enemies. The A.I. will go invisible when you’re sneaking and will teleport to you whenever you need to interact with something that requires both characters. Nothing special but it does what it needs to do.

Unfortunately, there’s no way you can issue orders for coordinated stealth kills or any other things you’d usually expect from a game with a permanent A.I. partner. There are boss battles where it’d really be helpful if one sister could aggro the boss so that I could shoot its weak spot but the A.I. usually just follows you around so it can’t be done. It’s not the best; hope you have a dependable friend who can join you in some co-op Nazi-shooting.

Furthermore, there’s no pausing the game even if you’re only playing with the A.I. I don’t know why it’s designed that way and it gets really frustrating at times. If you’re one of those gamers who might need to attend children or any other urgent matter at random times, bear this in mind.

Trying to play the game with randoms is also an extremely frustrating endeavour. First of all, the options are bare-bones. You either host a public session that anyone can join or you click on “quickmatch” and the game randomly pairs you with a host. There’s no filtering of missions or level. Matchmaking is pretty much non-existent.

I played around 6 co-op sessions with strangers and I never got matched with anyone who was at the same point in the story as I was. Before I jumped into a random co-op game, I only managed to complete one story mission.

Every other match I joined was either with someone who just had just beat the introductory mission or was almost done with the story missions. There was only once that I got paired with someone who was around the same level I was. More on the levelling system later.

Everyone else was either really underleveled or way overleveled. It’s really stupid and I gave up on playing co-op after I was done with two story missions. Why can’t the game do some sort of behind-the-scenes scaling so that everyone can have a fun time together on equal terms?

One of the greatest pleasures of playing a Wolfenstein game is that you really get to let loose. You move fast and shoot the heck out of Nazis. There’s no time for careful rational thinking. Run, shoot, decapitate, decimate, repeat. It’s simple and it’s absolutely fun. The double jump skill and the “open-ended” levels help make this part fun.

Every kill and completion of objectives gets you experience points. Collect enough EXP and you level up. When you level up, you gain a skill point and +2% damage increase for all weapons and skills. Here’s the catch: almost every enemy in every level/map levels up at the same pace you do.

So all that damage increase doesn’t mean a thing. I ended the game at level 39 and I honestly never felt I was any more powerful than I was at level 5. All the enemies seem to be able to soak up just as many bullets as they could at the beginning of the game. The only difference is that I have more maximum health and armour which were also kinda pointless thanks to the fact that every enemy levels up and does more damage to me anyway.

Silver coins are the in-game currency and they’re dropped by enemies, scattered throughout the levels, and rewarded after completing missions. You can use the coins to buy weapon upgrades which can actually affect your playstyle. Some upgrades will not only improve stats but also add functional parts such as a silencer or a flashlight.

Another strange addition to the game is an armour system for the enemies. This wasn’t there in Wolfenstein II: The New Colossus. Here’s how it works:

Every enemy that is armoured will have either one of two armour types. One is soft armour and the other is hard armour. The distinction is important because all your guns have a designated armour penetration stat. A gun that penetrates hard armour will do minimal damage to soft armour and vice versa.

This wouldn’t be a problem if you could switch between two different guns quickly. By the time the weapon switching animation is over, the Nazi supersolider in front of you has already settled down and is raising a Nazi family of his own.

Adding on top of that, the ammo for certain guns can be quite limited so I found myself never really using some of my favourite weapons that often because I wanted to make sure I had enough ammo for the correct armour types.

Remember those cool weapons like the laser gun and lightning rifle I mentioned earlier? Yeah, those have armour penetration stats too. So no matter how devastating a laser gun is, if it’s made for soft armour then it won’t be doing a thing to enemies wearing hard armour. There are doors and boxes that can only be opened by shooting with specific weapons so I ended up only using them for that.

There are times in the game where you could be severely underleveled for specific missions and if you try to rush them anyway, you would go up against an enemy like a giant mech or elite soldier who’s 5 levels above you. You’d be lucky if your bullets can even tickle these guys.

It wouldn’t be much of a problem if the level-gating was only applied to the not-very-fun side missions, but it’s also used to block story progression. After completing the game’s introductory mission which also serves as a tutorial, you have to infiltrate three Nazi towers. The game will put a skull symbol to indicate that you’re under-levelled for a mission; all three story missions for the three towers have a skull.

From the get-go, you’re told to grind before you can proceed with the story and I can see why the game is designed this way. There are less than 7 story missions in the entire game. I managed to beat the game under 10 hours and even then I spent quite a few hours joining random co-op sessions to try out the multiplayer.

I wouldn’t call it a grind if the side missions were fun. There’s nothing creative or even enjoyable about them. They’re mostly repetitions of “go here and retrieve an object or rescue person”. Even when I was playing the side missions with a friend or a stranger, I was mostly filled with the desire to just get it over with so that I could go back to doing the story missions. It’s just unnecessary padding for otherwise a game that could have shined with its co-op mechanics.

Speaking of the story, you won’t find any praiseworthy dialogue or plot here which is actually fine because as far as I’m concerned, there’s no need for such things in a Wolfenstein game. As long as they make the Nazi easy to hate and avoid making everyone else annoying, that’s a win in my book. Some people will find the low-IQ and hillbilly banter between the twin sisters a bit annoying but I didn’t mind it too much.

Wolfenstein: Youngblood is one of those games that has a lot of cool ideas and concepts, but barely sticks the landing.

If the co-op matchmaking was better and the mission structure wasn’t so lazily-designed, this could’ve been a really enjoyable co-op shooter that’s worth the 8 to 10 hours. Instead, it starts off strong but fizzles and gets repetitive the longer you play it.

And the less said about the unnecessary microtransactions and XP/silver coin boosters you pay with real money, the better.

Overall, I wouldn’t recommend getting this title unless you can get it for a discount. It’s currently sold for RM118.50 on Steam, though to be fair, RM90 would be just right for what you’re getting in Bethesda’s latest.