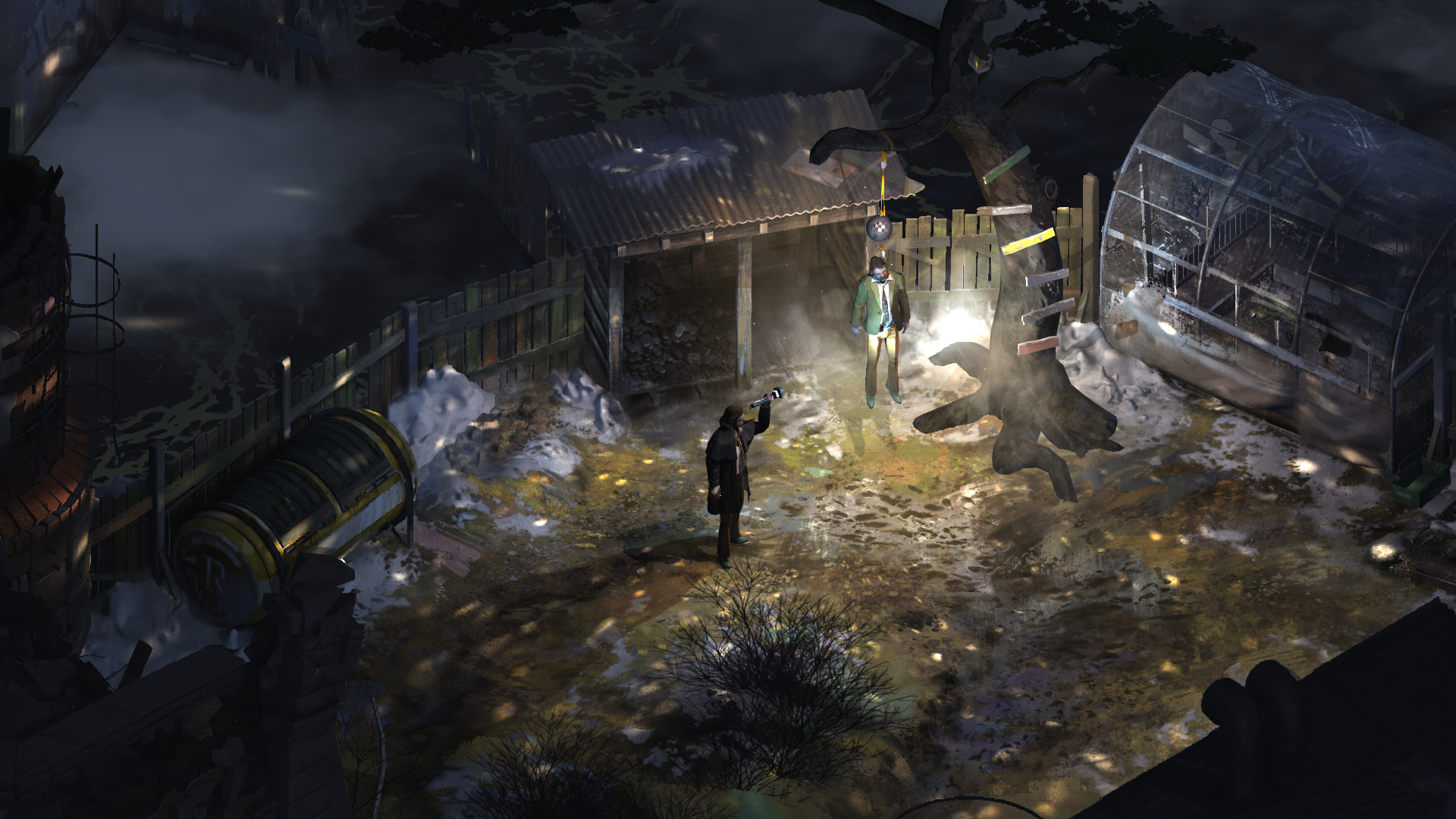 So far, 2019 has been a great year for role-playing games. With titles like Fire Emblem: Three House and The Outer Worlds giving RPG fans great opportunities to dive into massive worlds full of interesting characters spouting well-performed dialogue, there’s no doubt that it will be hard for other games to captivate would-be adventurers.

Disco Elysium came out about just a week before The Outer Worlds and many players were already saying that it blew every other 2019 RPG out of the water. As someone who’s played both games, I wholeheartedly agree. I would even go as far as saying that Disco Elysium is the best RPG I’ve played in my entire lifetime.

Having played games from award-winning series such as The Elder Scrolls, Dragon Quest, Fallout, and many others, I understand that that’s a big claim. I’m one of those people who prefer great writing and narrative in my RPGs rather than engaging combat systems, and truth be told, Disco Elysium heavily delivers on the former.

Putting The R & P In RPG

Like most good RPGs, Disco Elysium begins with you making your character. There aren’t any options to tweak your appearance or choose a class. All you can do is designate points into the four stats of the game and choose a signature skill out of 24 different skills.

For my first run, I decided to equally dump all my points into Intelligence and Psyche thus making myself a charming smart-ass but my abysmal Physique and Motorics meant that I could die from almost anything.

The game starts and I wake up as a middle-aged man lying naked on the floor, presumably after a wild night of drinking and getting high on god-knows-what. I check around the room and I see a pair of pants on the floor and a tie stuck on the spinning ceiling fan.

Next on my to-do list was to get that tie down from the ceiling fan. My high intellect manifested itself as a voice in my head representing the skill of Logic and it told me to pull the switch attached to the fan before I did anything stupid. Being the smart man I am, I heeded its advice and got myself a new tie which also began talking to me.

Then, I noticed there was also an option to switch on a light that was attached to the fan. RPGs often silently encourage you to exhaust all dialogue options to see what you can dig up so I did just that and switched on the light. It proved to be too bright for my hungover brain and the mistake cost me one health point.

It was the only health point I had because of my low Physique stat so my character got a heart attack and died. 10 minutes into the game and I faced my first game over screen thanks to me switching on a lightbulb.

That’s basically how Disco Elysium plays, and it is glorious.

There are no actual combat encounters in the game, at least in the typical sense. Conflict and action purely come from dialogue options and stat checks. There are stat checks you can re-attempt at a later time if you fail them and there are one-attempt only stat checks as well.

As I replayed the game and made a more balanced character, I discovered that I was playing as a detective who was assigned to investigate a murder that happened near the premise which I awoke in. Once I got my bearings and left my room, I came across Kim Kitsuragi. He’s a fellow police officer who acts as the player’s sidekick of sorts, joining your party permanently throughout the game.

Kim’s serious personality and low tolerance of nonsensical topics provide a very welcomed balance in contrast to our character’s ridiculous disposition, making him a shoe-in for one of 2019’s best characters in a game.

At this point, the main story and questline become clear: find out who committed the crime you were sent to investigate and bring them to justice.

Along the way, you’ll pick a ton, and I mean a TON, of sidequests or tasks that you can complete. This is one of those games where being a completionist isn’t a good thing. There are tasks that, if you carry them out, will actually put you in a position you don’t want be in, such as becoming the laughing stock of your precinct after reporting that you lost your police badge.

When people say a game is full of “diverse characters”, it rarely means what I think it means. For this game, it deserves that compliment. You’ll have to confront people who are liars, thieves, greedy businessmen, racists, and more.

Anyone can be your enemy or your friend. There is no wrong or right; just a lot of grey you can work with.

Like how most characters will have their own beliefs in politics, religion, and so on, your dialogue options will allow you to choose the kind of detective you want to be. Communist? Fascist? Disco? There is almost an infinite number of personality combinations, you just have to prod yourself into the right direction of mental oblivion. In fact, you can equip multiple “thought processes” from the in-game Thought Cabinet which help you bolster your stats; think of these as special artifacts and perks from other RPGs within this context.

Whether you choose Advanced Race Theory or Date of Birth Generator, each depicted with surreal watercolour artwork, these can help you pass your speech and situational checks easily. Or just make the game more fun; your choice.

It’s quite obvious that a game like this would need to be really well-written for it to be engaging. Believe me when I say that Disco Elysium has that base covered and then some.

In my 20+ hours of playing and replaying Disco Elysium, I’ve read thousands of words and rarely felt bored or uninterested. It felt like reading a really good book but way more fun, of course.

At first, it will seem as if the setting is quite small. The case will take more than just a day to solve and as the week progresses, more parts of the town begin opening up. New characters will also appear each day and there are tasks that can only be done at specific times on specific days. One playthrough will at least take you a dozen hours.

I don’t want to say more about the story and characters as I believe that it’s much better for you to experience it all yourself. I can safely say it’s an adventure worth playing through many, many times.

It’s not hard to see that Disco Elysium is an indie game. I don’t mean that in a bad way. The game’s tones shift erratically from depressing to crazy very often and the hauntingly beautiful art direction complements this. Every character and every voice in the player’s head has a portrait of their own and each one seems to have been illustrated in such a way that makes them all leave a mark in your memory.

The music is very minimal in this game but it’s often used to set up the atmosphere which it does very well. The true star of the audio department is the voice acting. Not every single line is voice acted but when characters do speak, it’s very convincing. My favourite is the voice in your head that represents your brain itself (yes, it’s a character too) who speaks in a deep, growling tone that makes my skin crawl.

Disco Elysium‘s strongest appeal outside of its gameplay is how it slowly opens up the fictional world and its history to the player. Everything from the country’s origins to its political systems is gradually demystified as the main character talks to other characters and himself.

Fun fact: If you invest in the Encyclopedia skill, there will be a voice that often weasels into your conversations so that it can tell you everything it knows about the world, including the useless stuff not relevant to your case. Like any trivia-loving asshat would. Classic.

Aside from a few graphical glitches, I really don’t have much to complain about. Again, Disco Elysium is one of the best games I have ever played and is most definitely my favourite 2019 RPG.

If you’re looking for a game that will humour you with an amazing narrative for at least 20 hours, this is the game. For those of you who don’t like reading a lot of text in video games and prefer combat over conversations, I would advise looking elsewhere. Disco Elysium has enough words to fill out at least a few thick books, and it’s worth more than a gloss-over or two.

Sci-Fi Souls-Like Dolmen Launches This May

These Are The Best Overwatch Workshop Creations So Far