Moving to a new place and environment is always tough, especially when you’re a teenager trying to cope with sudden life changes. While it does help build character for some, it may end up being a challenge to others.

Dreamscaper is basically tackling that conundrum, except instead of the challenges of making new friends and breaking out of your comfort zone, you have to conquer oodles of dungeons and kill off dark nightmare warriors & creatures in your “mind palace” to progress. So far, it’s a pretty stylish and action-filled ride if you’re expecting a slightly different take on the indie genre-gravitating roguelike design.

You play a young girl named Cassidy who moved from her rural home to the big city, at least based on the vague cutscenes and storytelling done here. As you can tell from the intro, she has trouble adjusting to the point where her subconscious and dreams are actual randomized RPG levels based on her memories and emotions. So to progress the plot and find out Cassidy’s deal, you need to conquer a bunch of dreamscape levels based on Cassidy’s memories and past, ranging from snowy rural village backdrops to orange-lit ruins based on a wrecked version of the town she’s living in.

Surreal stuff indeed, especially with the lovely art style and whimsy-filled slow-tempo piano-and-violin soundtrack -which ramps up appropriately for combat- that comes with the Dreamscaper experience. The soft highlights and smooth “filters” that accompany the rough-and-tumble effects from your attacks and skills work in tandem with each other, giving a unique vibe that’s only possible with indie constraints and ingenuity.

The game’s narrative is all text and conversation bubble-driven, but at least it’s not huge word diarrhoea thrown onto your lap. Touching a special object in the dream world will bring up some of Cassidy’s old memories, adding a bit more to what life was like before the big move. It’s purposely cryptic, though far from complete being its Early Access state. Still, the concept sounds promising enough to deliver a nice payoff.

What Dreams May Come 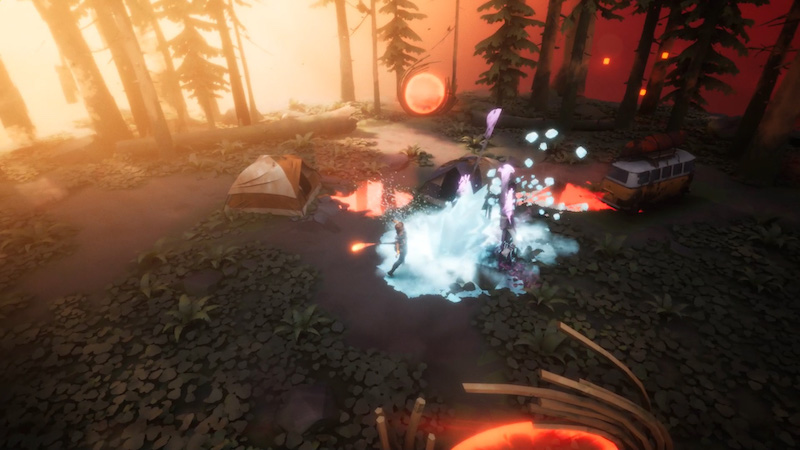 How’s the game, though? You tackle each dungeon in Cassidy’s dreams in a top-down action RPG style. She is front and centre as she unleashes attacks with whatever random equipment she’s bestowed with. Melee weapons, ranged weapons, two different types of spells called Lucid Attacks that come with cooldowns, ultimate abilities like the ability to stop time, a dodge, and a shield to block and parry attacks: Cassidy’s arsenal can get packed.

And also “pop-culturey” too, as she can fire “air bullets” with finger guns, corrosive water with poison-laden super soakers, and hit hard with boxing gloves and baseball bats. She can even do some air and earth bending with comic-book/anime-influenced mid-ranged melee attacks.

This being a randomized roguelike similar to titles like Dead Cells and your pre-arena anime fighter Spike Chunsoft creation, no two playthroughs are the same. Your first run of a particular world may give you the dream bombs you need to get through obstructions, but the second run may screw you over with chests that will only reward you with said bombs if you fork over 50 percent of your life. And since each world offers tougher enemies that hit harder and faster, you need to upgrade most of your abilities and weaponry lest you get killed fast.

Death in the dream world means you lose all your items and weapons, and have to start your Dreamscaper run from the beginning. However, this gives you a chance to make friends in the “Waking World”. In her real life, Cassidy has acquaintances in the city, be it her colleague Tamal, the bartender Eve, or the talkative historian Bruce. She only has a set amount of time to spend to visit the city and talk to these folks.

Bonding with them via conversation or gift-giving will not only flesh out your relationship with them and open up new stories that add more of Dreamscaper’s insight, but also lets you equip their “Influences” that give you perks for specific styles of play. If you want to boost your Fire-based Lucid Attacks, you need to keep building your friendship with Tamal. Ergo, you need to be friends with Eve if you want your ranged attacks to actually hurt and not just sting.

This is the only way to power up Cassidy for her next run or current run (if you choose to wake up after finishing a World). Doing this will also make your future runs a bit more manageable. The game also offer a few bonuses and opportunities to lessen the roguelike burden. Whenever Cassidy attacks with her melee of choice, you can press the attack button when she flashes white to add an attack bonus for better effects.Â The sand and currencies like Bliss and Insight you collect in your dungeoneering can be used to either create gifts for your pals or better weapons when you go back to sleep. Speaking of dungeon rooms, you can fast travel to any previously-visited location within a world, meaning that you don’t have to waste time backtracking.

Keepsakes you collect can give you powerful passive abilities like better poison effects and faster casting time or bigger AoE for your Lucid Attacks. Puzzle rooms also pop up, where you get pretty good loot if you take your time solving them. All in all, there’s a lot to find to help you out if you take the time. There’s no need to rush in Dreamscaper, which is pretty rare in roguelikes. And honestly quite welcoming.

Dreamscape isn’t as hardcore as action RPGs like the aforementioned Dead Cells or even the nearly-done Hades, but it isn’t meant to. The game’s tone, style, and relaxed pace is purposely contrasting with its randomized and escalating nature of its difficulty. Sure, you will not make it through a run as intended, but the game offers checkpoints after each world, giving you a chance to visit the Waking World.

The attacks, the dodging invincibility frames, and parrying windows are pretty lenient when compared to its influences, but it doesn’t demean the experience at the least. The game does offer tough challenges, especially with some of its end-of-world bosses and bigger enemies, but it’s not going to make you tear your hair out in frustration. With great controls and the “keep fighting for more loot” design that’s usually present in an action RPG, you’ll definitely be keen to keep pressing on in Cassidy’s mind palace.

Just some issues to bring up; it’s easy to get cornered by enemies in the later stages that have a few non-destructible barricades, leading to a huge loss of life from their long-ranged hard-hitting attacks.Â Some weapons and items you find need a tad more explanation. Hope you’re a fan of experimentation and tossing out abilities back and forth, because you will be doing this a lot when you come across better dream gear throughout your journey.

It can get a tad annoying if you can’t tell what an ability does from its vague description, but it’s not a dealbreaker. What could be is your tolerance for roguelikes and “roguelites” in general: if you like action RPGs but don’t like having to lose all your gear from a casual mistake, this may not be your kind of title. While not as incredibly nerve-wracking as other titles of its ilk, Dreamscaper will still give you a spanking if you slip up.

We can’t give a rating yet since it’s still in Early Access. So we’ll just say this: yes, we recommend Dreamscaper if you want a more whimsical and “relaxing” kind of action RPG with randomized levels and loot, as well as some much-need quality-of-life additions.

So far I haven’t come across any game-breaking bugs, but I do seem to be getting better weapons with each run. That’s probably the developer’s intention, but I do hope there’s a “hardcore” mode implemented later in its Early Access cycle, in case I want the challenge. Roguelikes are at their best when it’s purposely being stingy with loot and you have to make do with what you got.

Long story short: a must-try if you’re even slightly curious about what it’s like to confront your literal fears in action RPG form, while also being able to chill out with pals in real life for fun and profit.

Rebellion Developments has announced the official release date for Sniper Elite V2 Remastered, which will be coming out on 14 May 2019 for the PS4, Xb...

Monster Hunter World Iceborne Title Update 4 finally has a release date (9 July 2020), and that means the incoming arrival of the dreaded monster Alat...

Elden Ring's closed beta network session will be playable this weekend, but a number of publications have released previews and hands-on for the upcom...