When you spend the equivalent of US$60 on a game, you expect quality, polish, replayability, and a breadth of content. Whether it’s for PC or consoles, triple-A prices are akin to luxury goods, and you want to get the most out of it. The last thing you want is a broken product that’s out of the gate, with promises of it being fixed and providing additional content in the future. That is, if it ever happens.

Mihoyo, the folks behind the mobile action game hit Honkai Impact, is putting your triple-A companies to shame by releasing an online role-playing game (JRPG here) that’s more or less a “triple A” title for major platforms, and doing it for free. Sort of.

See, the company’s latest offering, Genshin Impact, is loaded to the brim with open-world questing and secrets to complete and discover. The only payment option that’s available – optional, by the way- is trading your money for Genesis Crystals, which are used to get in-game currency that allows you to “gacha” for characters and weaponry. The other stuff like questing, combat, and exploring? That’s not behind a paywall at all; it’s all available if you put in the grinding work as expected from a JRPG of this magnitude.

And so far, my 20 hours into this timesink is well worth the trouble and effort in jumping through the game’s “mobile f2P’ hoops that are within its gaming DNA, though to be fair it’s not as obnoxious as most titles. 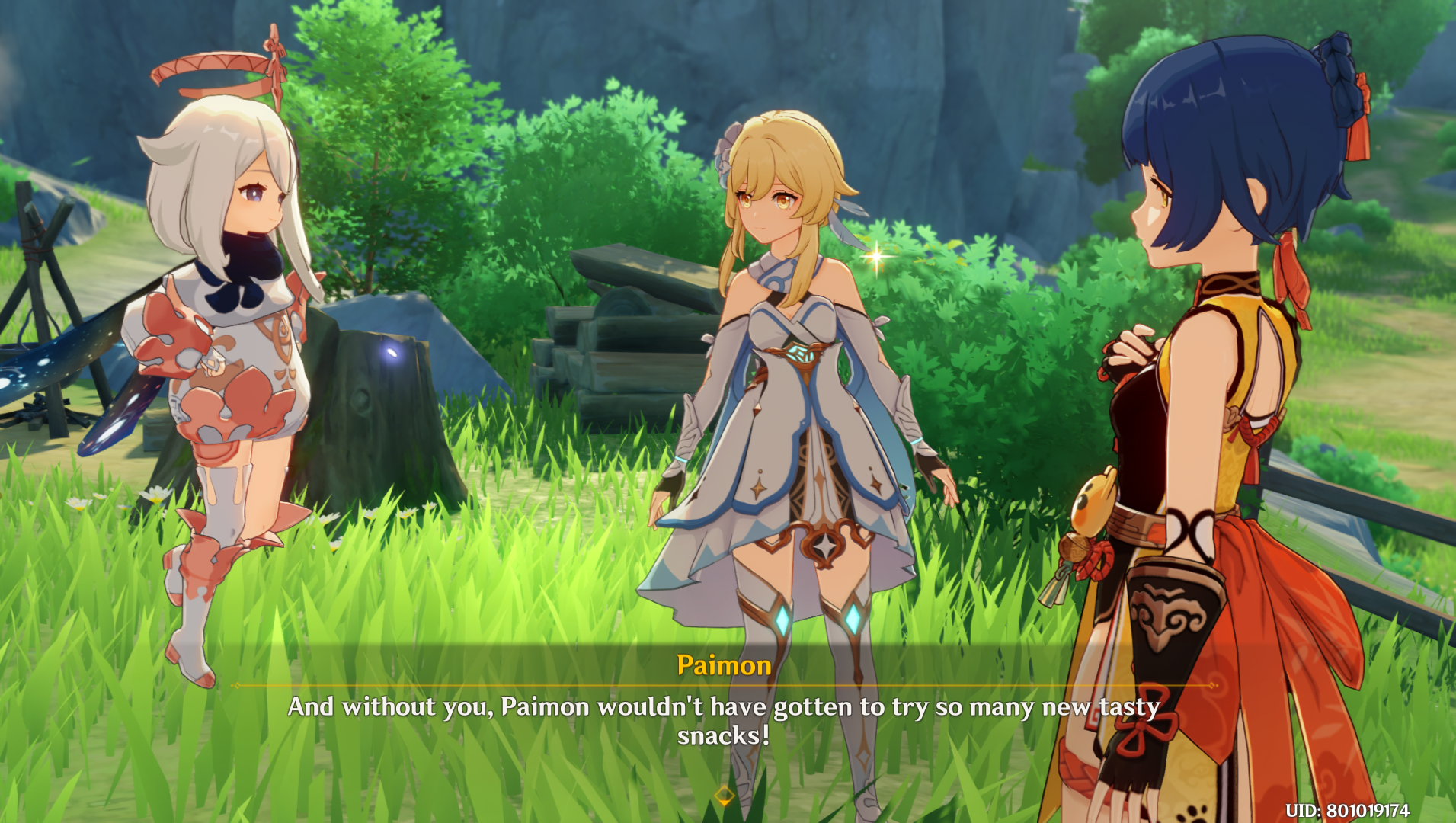 Genshin Impact’s plot starts off with you, the Traveler, being given the task to be Monstadt’s protector and errand boy/girl. You begin by discovering what’s causing the resident flying dragon to go berserk, followed by many conspiracies involving the world’s many gods and deities, as well as their respective reincarnations.

But really, that’s all window dressing to the game’s real objective: to explore the whole continent, uncovering its many treasures and secrets, and getting your Adventure Ranking to a high enough level to unlock the game’s many options. Speaking of dressing, we should address the Divine Beast Vah Ruta in the room. Yes, Genshin Impact’s aesthetics are incredibly similar to The Legend of Zelda: Breath of the Wild, from its landscape & most of its visuals to even some of its background music.

But the similarity stops there: gameplay-wise, it’s more a mish-mash between a Bandai Namco Tales of game and a Western open-world RPG ala Witcher 3 and The Elder Scrolls V: Skyrim. The game’s combat is reminiscent of the former, while the exploration and climbing aspects are more of the latter. This is incredibly apparent when I’m finding the most optimal way to climb cliffs and scale mountains to open up that sweet treasure box or turning on a teleporter stone.

Despite that sense of familiarity, I had a lot of fun just checking out the world of Teyvat and being enamored by the random encounters and quests as I traverse from the hub of Monstadt to wherever I fancy. From gorgeous hillside areas close to the sea to the forboding rock formations that lead to a high-level dungeon you can farm, to even the lush views of the ancient China-inspired Liyue, there is no shortage of things to do and attempt. You can not only fight, but can glide across areas, cook up food to boost stats, and solve simple puzzles to unlock chests.

And then we have the game’s main hook: the fun & stylish combat. You defeat monsters in action RPG glory; you have your attacks, your elemental specials and supers, and your dodge button. Here lies the kicker: you will eventually end up with a group of three other adventurers to switch between, but you can only have one fighting at a time. You can switch between them at any time and even mid-combo when needed. See, each adventurer has his or her own fighting style -melee, ranged archer, spellcaster, a mix between the two ala “rojak” – and their respective elements. Elemental attacks here not only deal damage, but can also inflict status effects like Freeze or Electro-Static. When enemies have these effects, casting the opposite or “correct” elemental attack will trigger an elemental reaction that either debuffs them or deals additional damage. Or both!

This is where combat in Genshin Impact gets really fun: you can build a party that takes advantage of these effects and help make combat manageable. Some characters work well with others like Hydro and Electro party members, while some combinations might hinder you. Coupled with high-level dungeons you unlock later in the game that hinder you with mandatory elemental debuffs and enemy advantages, party management before battle is pretty important in conquering Genshin Impact from start to the current “endgame”.

There’s a huge thrill in dealing a heckaton of damage by just setting up Electro-Static and Wet status effects, and then following them up with a corresponding elemental burst to wipe them out in one satisfying swoop. And that’s just for solo play. Once you unlock Adventure Rank 15 and above, you can team up with other players and tackle tougher dungeons together. Some coordination is required, but once you get to the swing of things, you’ll be elemental bursting and reaction-making with your like-minded pals in no time flat. 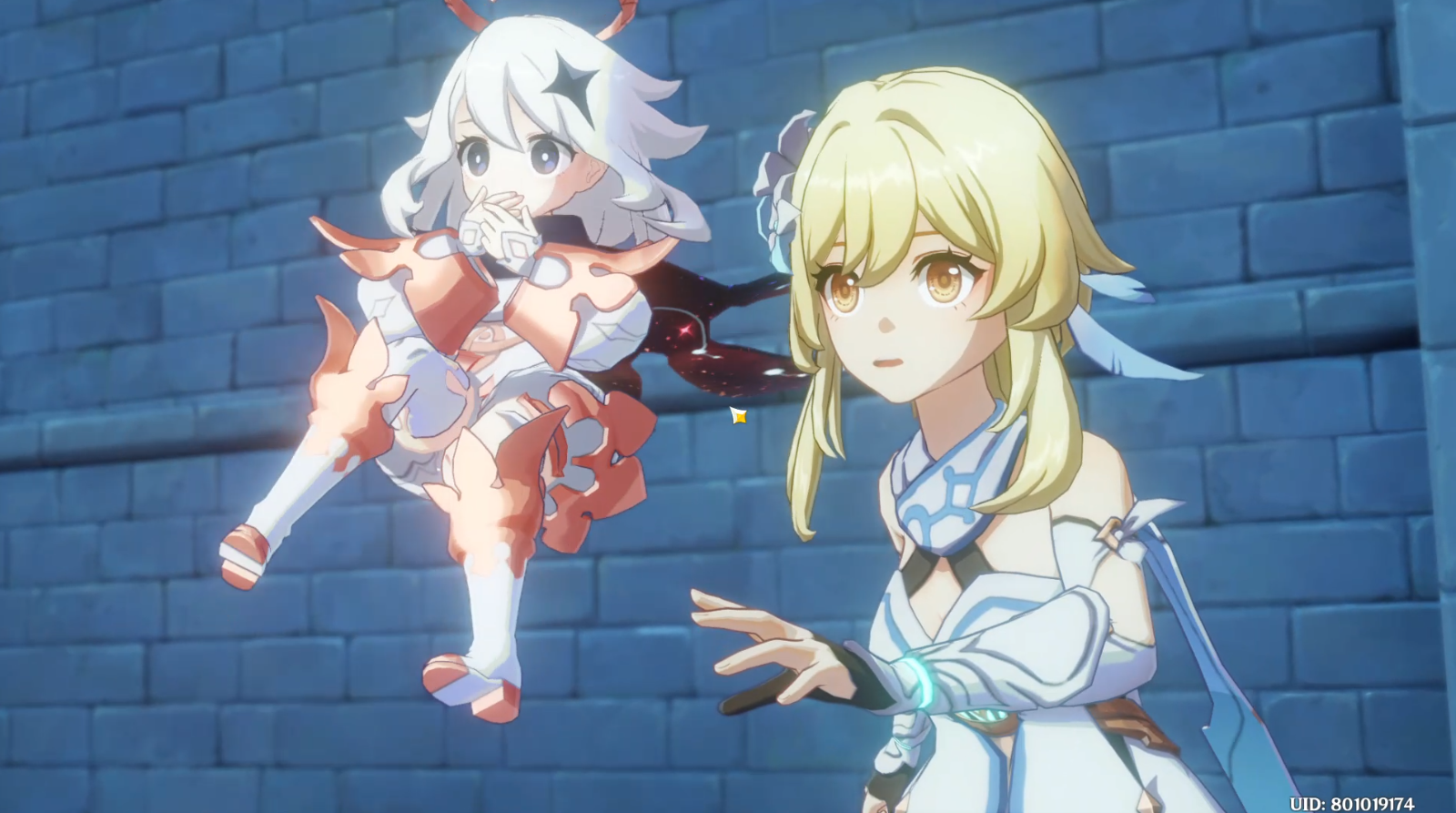 And therein lies Genshin Impact’s potential dealbreaker: you need to pay money to feed the gacha machine if there are particular characters you’re eyeing for like Venti and the elusive Pyro melee husbando Diluc. Mihoyo’s design here is standard mobage gacha tactics: the game and its breadth of content is free, but if you want the best of the best, you will eventually need to break out your credit card.

Some folks in the content creation space will find umbrage at this. Personally speaking, as someone who has been playing it free and easy with a lot of character gacha-driven mobile RPGs like Dragalia Lost, Tales of Crestoria, and that one Final Fantasy Tactics-esque game with the long-ass title, Genshin Impact is pretty generous and fair with its approach. My 5 gacha rolls using the game’s generous dose has #blessed me with decent 4-star characters and a pretty good 5-star loli-bait Hydro witch.

The starter characters I received in the first few hours of the game -Amber, Kaeya, and Lisa- are pretty good and can help fill up the lacking elemental roles needed for most of the dungeons and instances. If we’re talking high-Adventure Rank max level content, their usefulness is debatable, but if we’re being real, you don’t need to spend weeks doing the whole “restart the game after 30 minutes in to get the perfect free starter roll”. Genshin Impact is already fun once you get into the swing of things and just use whatever you’re given.

Having said all of that, I do have some legitimate complaints. Genshin Impact doesn’t fix the immersion-breaking aspects of a mobage/mobile RPG where you can control story characters you get who aren’t supposed to be in the main quest line. For instance, rich vigilante pretty boy Diluc tasks you with doing a quest behind the Monstadt knight regime’s back and from commander Kaeya’s eye. In the fights of the story mission itself, I am not restricted from using Kaeya at all and can swap him in battle at any given time.

There are many, MANY instances of this that could have been fixed given Mihoyo’s experience with mobile RPGs. While not gameplay-breaking at all, does give the impression that Mihoyo is world-building but not giving a hoot about these immersion-breaking bits. It’s a tad disappointing and unfortunately a staple in these kinds of games, because Genshin Impact’s characters are pretty cool and have some semblance of fleshed-out personalities. Even if they’re based on existing anime archetypes – the tryhards, the too-cool-for-school leaders, the affable mystery man- they have somewhat interesting backstories to delve into, like that Diluc sidequest I mentioned.

And there are some side quest gems like these where I played hide-and-seek with a mentally-disabled juvenile, only to find out the sad truth about his parents, or the one about the fate of a family of miners and how greed can eff up a family. This isn’t CD Projekt levels of meticulous detailing, but Mihoyo did try their best. If only they can go further than that; time will tell if the game’s future updates will do just that. Right now, I do wish the game’s upcoming patches can fix certain audio foibles and latency, as well as add in more multiplayer communication options like Apex Legends’ pinging. 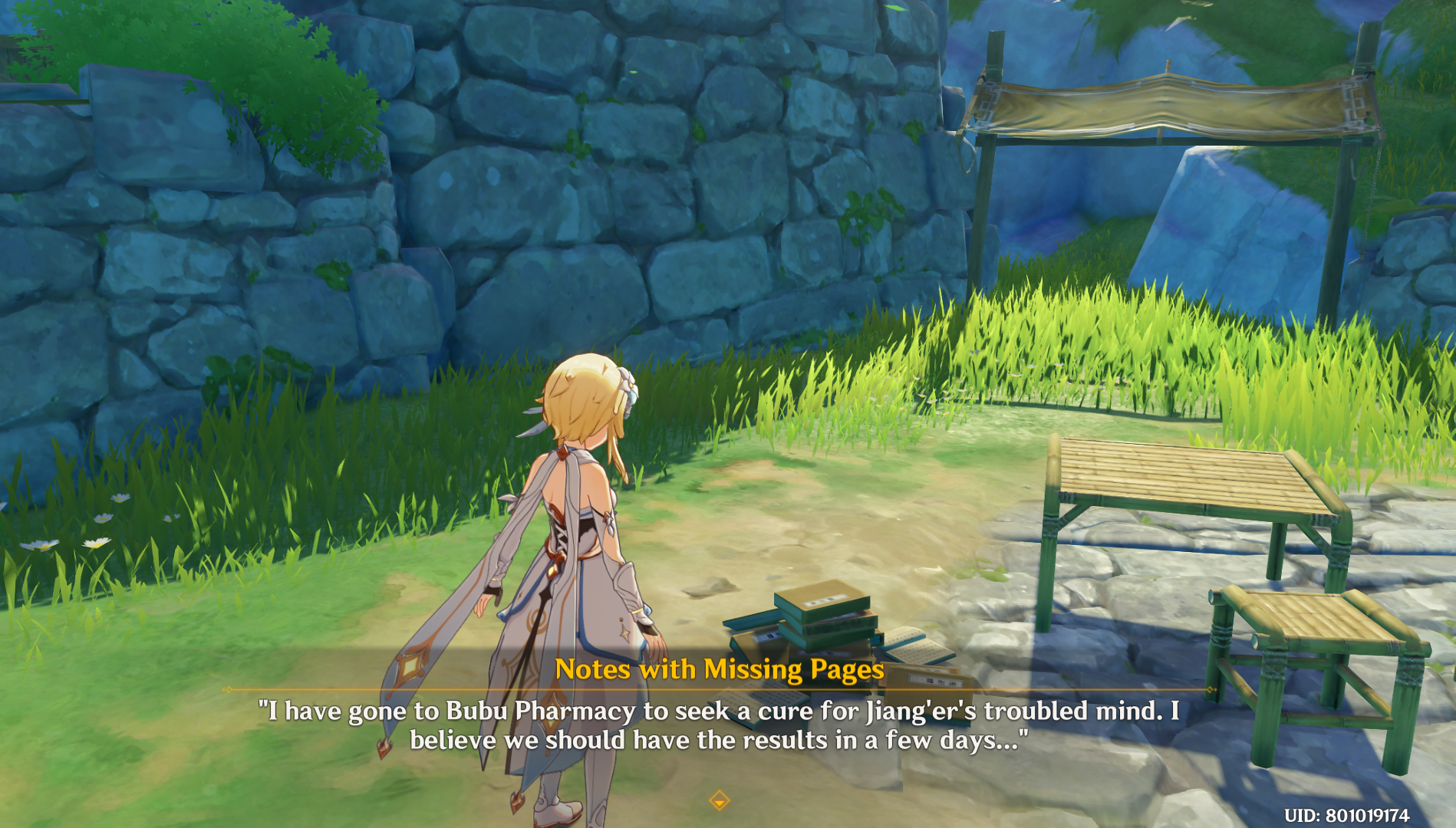 25-hours in, and I’m having a ball of a time just exploring and taking my time with it. And best of all, the game isn’t doing anything to pressure me for my money; its monetization tactics are optional and doesn’t inconvenience you in the slightest. What harm is there in plunging into an online RPG when it’s free for PC, PS4, and mobile devices, apart from all of your free time vanishing from all the JRPGing you’ll be doing solo or with pals? The crossplay options here (for all the aforementioned platforms) means that you can pick up your progress whether you’re at your desktop rig or on your phone at your local coffee place. Just mind the heat buildup for the latter playing option; we heard iOS and Android phones gets superhot like the game’s preregistration numbers after an hour or two.

As entertaining timesinks go, Genshin Impact has it made. The game has a ton of potential to grow to become stellar and eye-opening; perhaps even better than its aesthetic sources of inspiration and contemporaries. As of now though, it’s settling just fine with a bronze medal as online RPG comfort food. 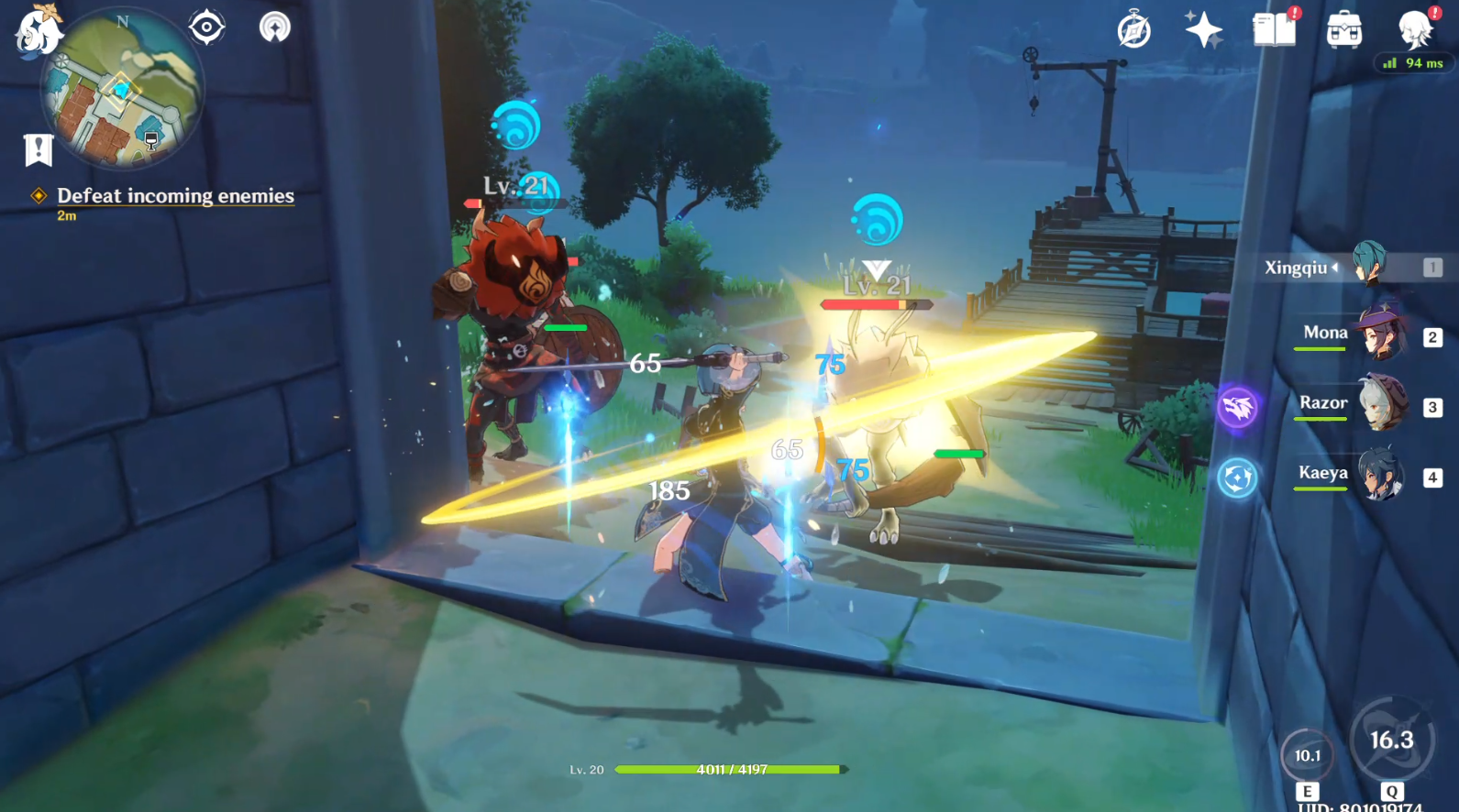 There's no rest for the wicked. Respawn, the developers behind the critically-acclaimed multiplayer shooter Apex Legends, highly-praised shooter Titan...

Is the Movement Control Order making you miss the cybercafe experience? Well, with Orange Esports Cafe's new initiative, you can sort of experience it...

Many gamers (like yours truly) have long bemoaned the current trend of turning every franchise into a battle royale title. It seems like nothing is sa...