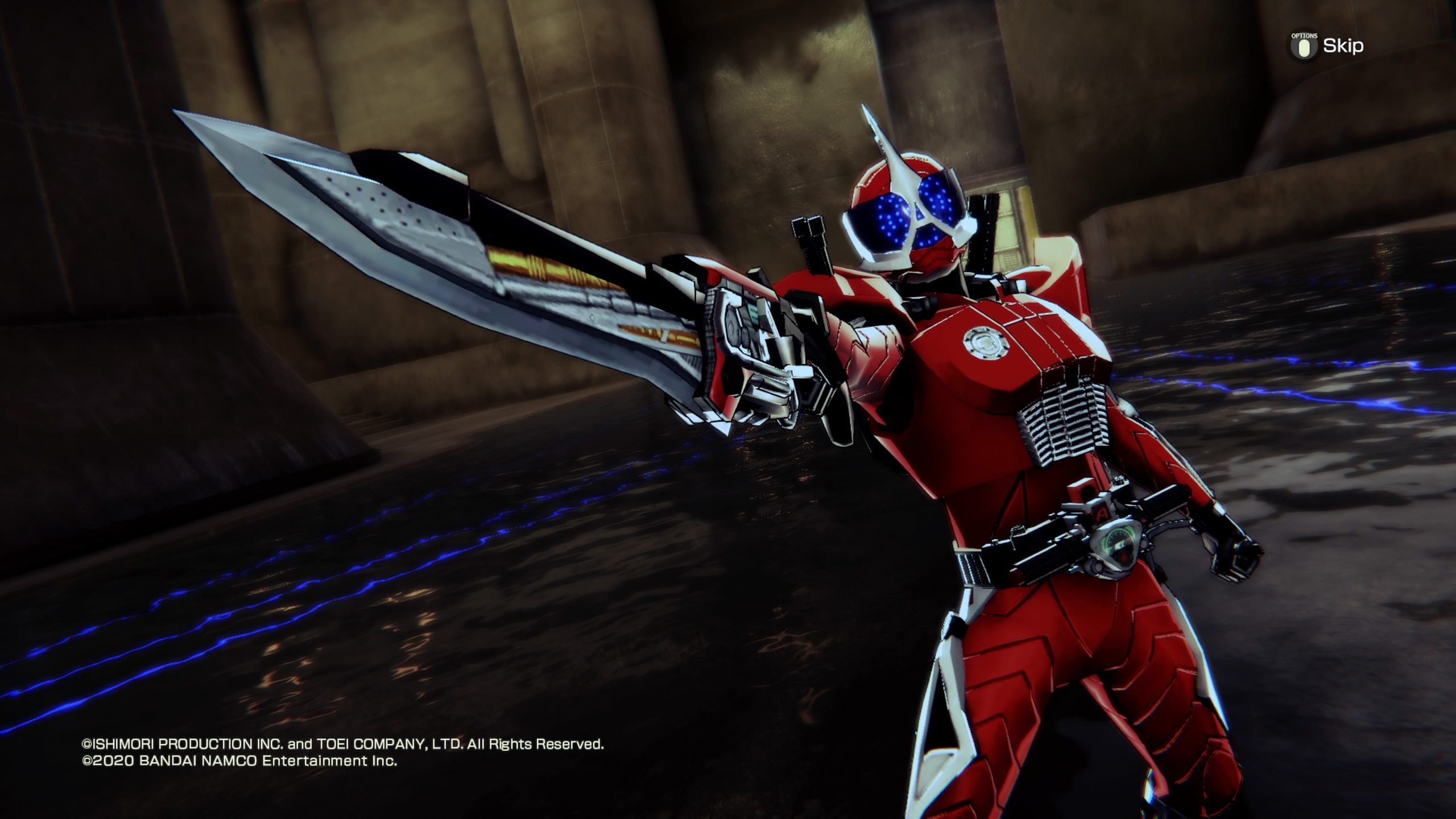 Kamen Rider is a tokusatsu franchise, just like Super Sentai/Power Rangers or Ultraman. However, the tokusatsu franchise hasn’t had much luck being adapted into video games, as most tend to be mediocre at best and more geared towards the more avid fans.

How does Bandai Namco’s Kamen Rider Memory Of Heroez fare? It’s actually a pretty decent game, even to a non-fan like me, which was a pleasant surprise. I was expecting to find just another cheap tie-in game, but what I experienced was far better than it should have been.

First, full disclosure: I’m not a Kamen Rider fan. I watched several of the older series when I was a kid, but then lapsed out of it as I grew older. Fortunately, you don’t really need to be one to enjoy Kamen Rider Memory Of Heroez.

What’s with the choices of Kamen Rider series in the game? Since I’m no expert on the franchise, I’d hazard a guess that Bandai Namco chose two series to represent the previous Heisei era (W and OOO) while also featuring Zero-One, which is the first series in the new Reiwa era.

While the game features an original story independent from the three Kamen Rider series, the story and plot are mostly just there as an excuse for these different Kamen Riders to meet each other and team up against a common foe.

However, I’m glad that Bandai Namco didn’t just resort to making another fighting game (like they do with most licensed anime games and the like). Instead, Kamen Rider Memory Of Heroez is an action RPG beat-em-up brawler title.

The game essentially features only two modes; a full story campaign that takes around 10 to 11 hours to complete and a simple survival mode, where players fight against continuous waves of enemies in succession.

While the narrative pretty much fails to impress in any way, the meat of the game is the gameplay and combat. Fortunately, I enjoyed that part of the game, despite not being a fan of the franchise.

The combat in Kamen Rider Memory Of Heroez reminds me a lot of the Devil May Cry franchise, as it seems like Bandai Namco has borrowed many elements from Capcom’s celebrated action series.

In Kamen Rider Memory Of Heroez, players basically go from room to room and area to area beating up groups of enemies. At the end of every sector, they’ll encounter bosses. Oh, and the game also tries to spice things up with shoehorned vehicular segments that feel half-assed.

There’s little to no exploration to speak of, as the game is as linear as a game can be. All you can do is move forward and get thrusted into fights and more fights with groups of enemies who are severely lacking in terms of variation.

But wait, I did say that I enjoyed the game, and I mean that. The meat of the game is the combat, and it delivers on that front. Kamen Rider Memory Of Heroez features a satisfying combo-heavy combat system.

Players will receive a style ranking after every enemy encounter based on a number of factors, including the number of their combo chains and the amount of damage done to enemies. It’s almost exactly ripped off from Devil May Cry, as the ranking system in this game also features the S, SS, and SSS style ranks.

However, it’s so much easier to obtain the SSS style ranking in Kamen Rider Memory Of Heroez. Plus, the lowest style ranking you can get is either A or nothing at all, so you know that the game won’t slap you with an embarrassing D-d-d-dismal style ranking.

What makes the combat in Kamen Rider Memory Of Heroez fun and never really gets old is the ability to juggle your enemies during battle. Just like in Devil May Cry, you can juggle your enemies into the air and beat them in mid-air for even higher combos. It feels satisfying to pull off, especially for some of the faster Kamen Riders.

While the combat in Kamen Rider Memory Of Heroez isn’t as deep as Devil May Cry, the sheer variety of different playable Kamen Riders makes up for it. Sure, there are only like five of them in the game (which you’ll unlock while progressing through the story), but several of them have access to different Forms, each of which comes with their own combos and fighting styles.

Heck, Kamen Rider Double (W) alone has access to about nine Forms, and that’s not even mentioning the Forms available to Kamen Rider OOO and Zero-One yet. You can change to any of these Forms at any time during battle, which lends a more dynamic and experimental element to combat.

The game also encourages players to change Riders often, as the only way to heal is this game is either to perform counterattacks or at any of the sparse terminal checkpoints. Each Rider has his own health bar, so if one is low on health, you can just change to another (unless you’re forcibly locked to that one Rider, which sometimes happen).

In addition, you can’t just bash and mash buttons to victory in Kamen Rider Memory Of Heroez, as the game features a stamina system called the RP mechanic.

Using normal attacks won’t use up RP, but doing anything else like strong attacks, unique attacks and most importantly, dodging, requires RP. You can find yourself vulnerable after a flurry of combos and unable to dodge an attack just because your RP is depleted.

Still, you often don’t really need to worry much about all that, as the game can be laughably easy even at Standard difficulty, with the exception of difficulty spikes when facing some of the bosses (which do require a bit of skill to overcome).

The game also features additional gameplay mechanics like the Denden Sensor, which is sort of a gadget you use to find Accelerator. Accelerators are items that you can equip your Kamen Riders, giving them stat boosts or other perks.

There are also light RPG elements in the game. You level up your Kamen Riders by using them in battle, and the EXP points can be used to either activate Accelerators or unlock more options on the skill trees. Unfortunately, these skill trees are simple and lacking in depth, as they usually just unlock more stat boosts or chargeable attacks, instead of new combos or anything that adds variety to gameplay.

Fans of the Kamen Rider franchise can appreciate the fact that in the Premium Sound Edition of the game, there are over 60 different music tracks. The music changes every time you change Kamen Riders, or even when you simply change Forms. It’s cool, but it’s still a bit off-putting that you have to pay extra for all that.

That might sound harsh, but yeah, Kamen Rider Memory Of Heroez looks like a last-gen game at best. The Kamen Riders themselves look good but enemies and environments are bland and the textures lack details.

It’s not really that bad, but this isn’t a game where you can admire the graphics. The linear and empty environments make it worse, but at least the fun combat makes up for them.

Still, the game may get repetitive in prolonged sessions, especially near the end of the game where it’s clear that the developer is padding the game with waves and waves of enemies.

I also don’t understand the developers decided to set a lot of the game’s setting in cramped hallways and small rooms. I’ve had to fight my way through literal official cubicles and narrow pathways in factories throughout the game. The game’s combat would have benefitted a lot more from more open settings, a la Devil May Cry.

It would have been preferable if the game had given players the freedom to choose any Kamen Rider at all times, and let them figure out how to solve the problem themselves. There are also shoehorned vehicular segments which disrupt the gameplay, and they’re not even fun to play.

Ultimately, Kamen Rider Memory Of Heroez is a decent action beat-em-up game that even non-fans of the franchise can enjoy. I enjoyed my time with this game, and you can too. However, only fans will be able to fully appreciate this game and value everything that it has to offer.

If you’re simply looking for a good action or beat-em-up game, there are countless more games out there that’s better than this one (if you’re not a Kamen Rider fan).