Spider-Man: Miles Morales Pays Homage To The Past With Promises of A Bright Future

Ever since his introduction into the Marvel family in 2011 when he took over the mantel of the Ultimate Universe Spider-Man from the recently deceased Peter Parker, Miles Morales has risen from merely a “Spider-Man in a dark suit” into a cultural icon. This is mostly thanks to the brilliant portrayal of the character in 2018 animated movie Spider-Man: Into The Spider-Verse.

Coincidentally, 2018 was a brilliant year for web-headed wizard fans thanks to the release of the Insomniac-developed Marvel’s Spider-Man which proved to be the quintessential superhero game of the last console generation. Needless to say, we knew a follow-up starring Miles Morales is going to happen by that game’s end. The scene where Miles shows his newfound spider-powers to Peter was obvious sequel-bait teasing at its finest. So it’s no surprise that 2020’s Spider-Man: Miles Morales is going to face a daunting task of living up to the heights of 2018’s best.

So, does it? Does Miles Morales’ own adventure and superhero definition journey mirror its predecessor closely? Yes, comparisons will be made, but Insomniac made the smart decision of presenting another view of the trials and tribulationsÂ a common New Yorker had to go through en route to being the saviour of their city.

To those who have played the original game, they can get right into the thick of the action right from the get-go. The little traversal and combat tricks from 2018 can all be instantly implemented in Spider-Man: Miles Morales even before the tutorials kick in. From the mid-air boost by tapping the X button to the immediately perching on a ledge by pressing both L2 and R2 buttons simultaneously, Insomniac did not change the fundamentals, but instead, tweak the mechanics to suit the man in the suit.

Like the original, combat and movement feels flowy-smooth but you would instantly realize those little quirks unique to our hero Miles. He does not hit as hard nor carry the panache and finesse of a veteran web-slinger in Peter. Instead, Miles flails like a disoriented chicken mid-air between swings, gesticulates more during dodges and, at least to my experience, has a smaller window for pulling off counters. This ties very close to the comics where, while he shares similar “Spider-sense” ability as Peter Parker, only kicks in at the very last minute.

However, Miles has several superpowers unique to him, including the ability to generate bio-electricity which he named as Venom Strike or Blast and the ability to go invisible. Both are super helpful in assisting Miles when surrounded and, or when attempting a stealth approach into a room filled with enemies. For those who finished Marvel’s Spider-Man, it would be wise to refrain from trying to tank through the crowd and instead, combine a good mix of quick hits and exits while smartly pairing the invisibility ability in between.

As for newcomers, the intuitive controls should be a breeze. This enables even the “noobiest” of noobs to confidently swing around Manhattan island like a seasoned pro barely an hour into the game. It’s still the same fun game here, but with a different spin on things. 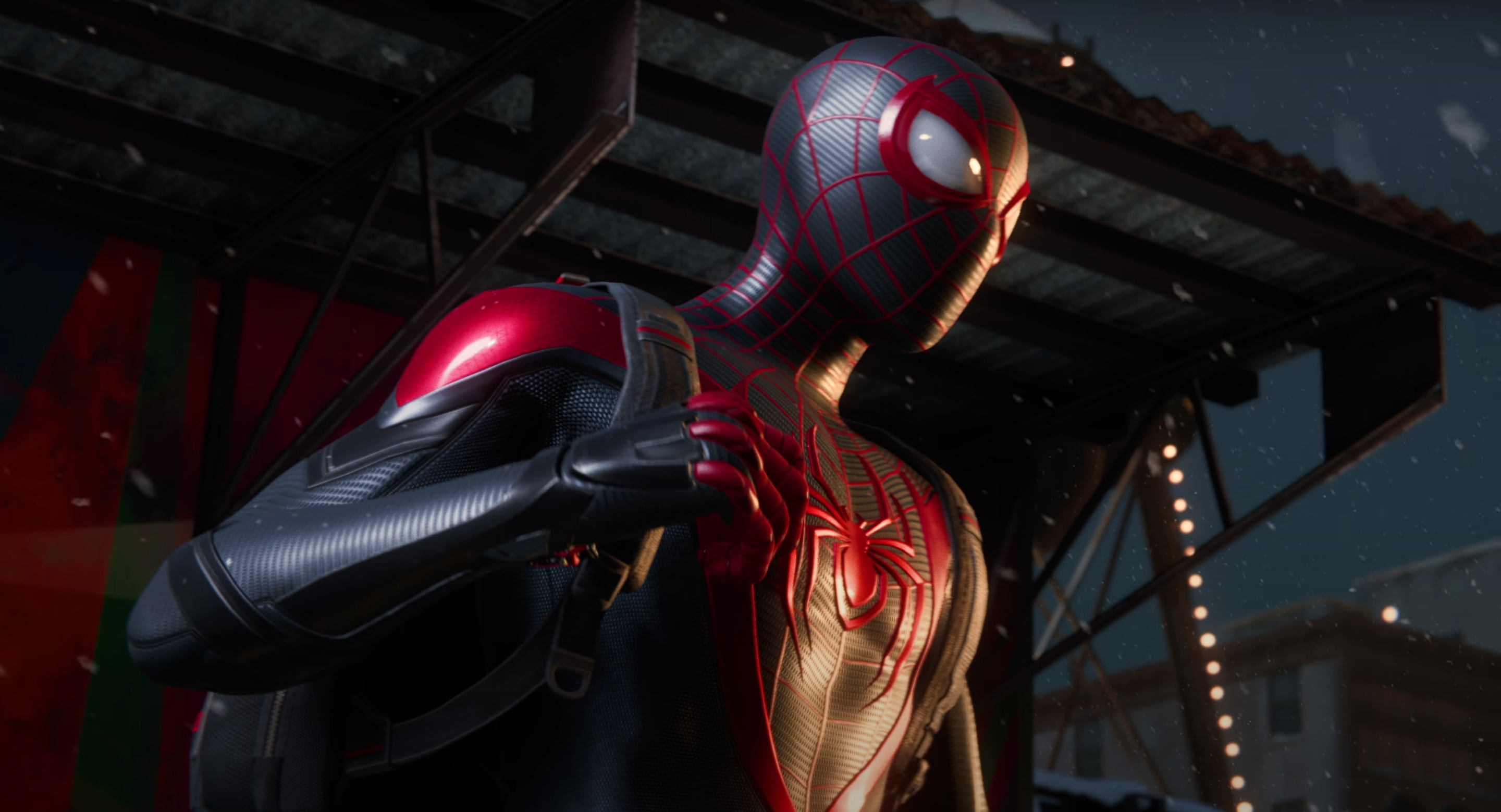 As you’d come to expect, Spider-Man: Miles Morales is set in New York but carries a much more ‘”Friendly Neighborhood” vibe to it than Insomniac’s 2018 “big city, big stakes” offering. While in the original game, we had Peter covering the entirety of Manhattan island, from the Financial District to Harlem, Miles’ adventures are much more concentrated around the northern part of the island, giving very little reason for him to traverse beyond Greenwich save for during open-world exploration. Due to unavoidable reasons early on, Miles is on his own for the festive period in New York and have to contend with balancing his social with superhero life.

Lines get blurred when people close to him gets into the thick of things. While the premise of the storyline isn’t exactly novel & original- you can already guess who the big baddie is right from the start – it is definitely a fun, coming-of-age story where Miles graduated from being “the other Spider-Man” into “THE Spider-Man”.

Rather than taking down militarized security contractors, Miles sorts out local problems like small-time thugs and petty crime. Instead of trying to save the whole of Manhattan island, Miles’ problems this time around circled around Harlem and his mother’s political campaign.

As a result of this more “localized” setting for a more “localized” problem (for Miles at least), the game is half as long compared to the 2018 game. It is, however, chock-filled of content with collectables scattered throughout the island, petty crimes to solve and iconic landmarks to visit. Having done all of those before, it was indeed a nostalgic trip running up Avengers Tower or visiting Daredevil’s haunt in Hell’s Kitchen save the New York winter aesthetic. This is a much more condensed Spider-Man experience – a more intimate one, but not an inferior one. And it comes with a funkier soundtrack that jives with its younger protagonist.

Performance-wise, load times have been considerably quickened and you’re transported to a new section of the map in no time at all, even on the PlayStation 4 Pro. I can only imagine how fast it would be on the PlayStation 5. Graphics-wise, Spider-Man: Miles Morales does show what two years of additional development could bring and with ray tracing coming with its PS5 version. It’sÂ a fitting title to boast what a next-gen PlayStation console is able to do. 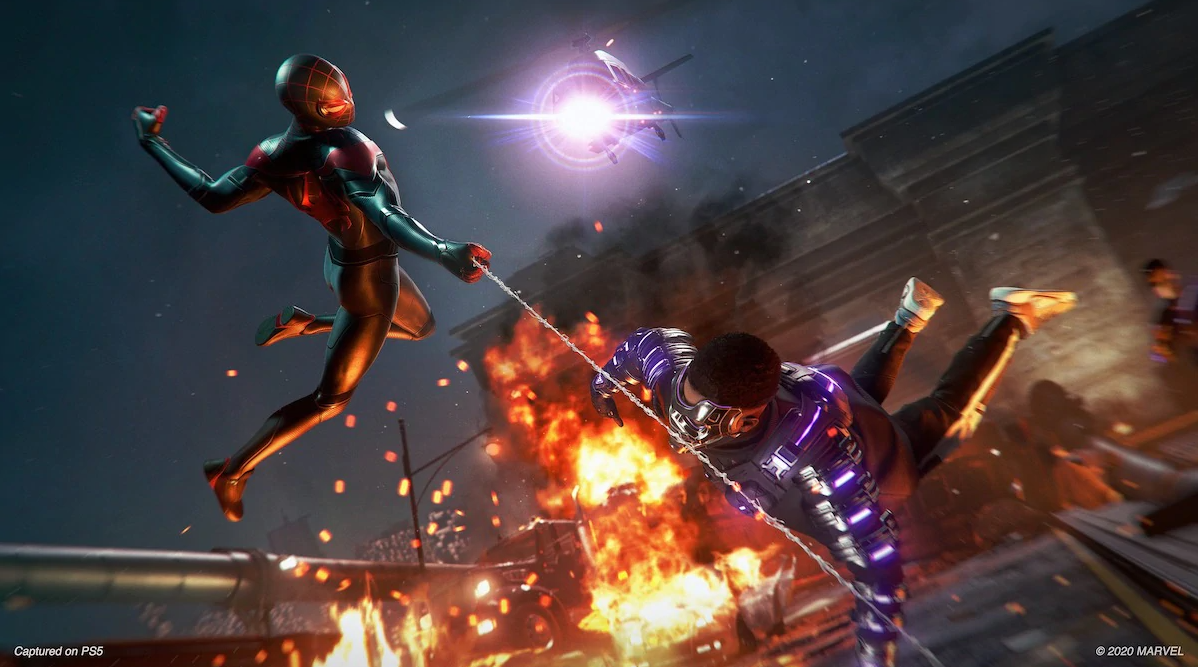 To those who are skeptical, thinking that maybe Insomniac should have sold this game as a DLC to the original, I have this to say – it is a completely different game featuring a very different narrative and lead character. Spider-Man: Miles Morales does not try to be or replace Marvel’s Spider-Man. Yes, it shares the same engine, is set in the same universe and continuity as the original and brings back a familiar cast we’ve come to love. And true, it is a tad pricey for what amounts to be a “stand-alone expansion” experience.

Perhaps in an attempt to pad the game, and justify the price, there are a number of puzzles strewn throughout the map but they aren’t as frequent nor tedious as how it was for Peter in the earlier game. Gone are the days where you’re required to move around circuit boards to unlock or activate a machine just for those few extra tokens to upgrade Miles’ skillset.

Even when you encounter one, the solutions are obvious enough while also retaining that sense of achievement once you’ve overcome them. As it goes with all open-world games, you’ll be prompted – quite often to engage on a mini hunt for items- most of which are just time padding activities.

Due to these slim pickings mentioned, labelling Spider-Man: Miles Morales as a sequel to Marvel’s Spider-Man is a bit of a stretch. However, rather than trying to bury that fact, Insomniac shifted the focus to the message it is trying to convey from the moment you press ‘O’ at the start menu. Just like Miles in the comics, Spider-Man: Miles Morales does not try to out-do an already established name. Rather, it carves a new story for themselves in a familiar-but-comforting setting.

It’s like an analogy of moving on from the PlayStation 4 to PlayStation 5. We’ve had a great 7 years with the PS4. But moving on with the times, PS5 offers gradual improvements in several areas, without taking away any of the good things we’ve experienced with its predecessor.

A review copy of Spider-Man: Miles Morales was provided to us by Sony Interactive Entertainment (Asia). The game was reviewed on the PlayStation 4 Pro.Â  We completed the game on Spectacular mode in just under 8 hours.Â

Devil May Cry 5 is receiving almost universal acclaim by critics and fans alike, just like Resident Evil 2 earlier this year. If you're one of the gam...

Tiny Tina's Wonderlands is what Borderlands and looter shooter fans have been waiting for: great action, a fun D&D dungeonmastering story, and ton...