You never forget your first love. In Arc System Works’ case, it’s the Guilty Gear fighting game series, the one game that put the company back on the fighting game map.

Since its memorable “rebirth” back in 2013 with Guilty Gear Xrd, many fighting game fans are wondering how the series can evolve from here on out. They’ve got their answer, and while there’s a ton of outcry against the change, we have to remember that in the video games industry, change can be scary. Change can make the most mature of fighting game fans feel betrayed and do irrational things like crying over and boycotting a game that isn’t even out yet. 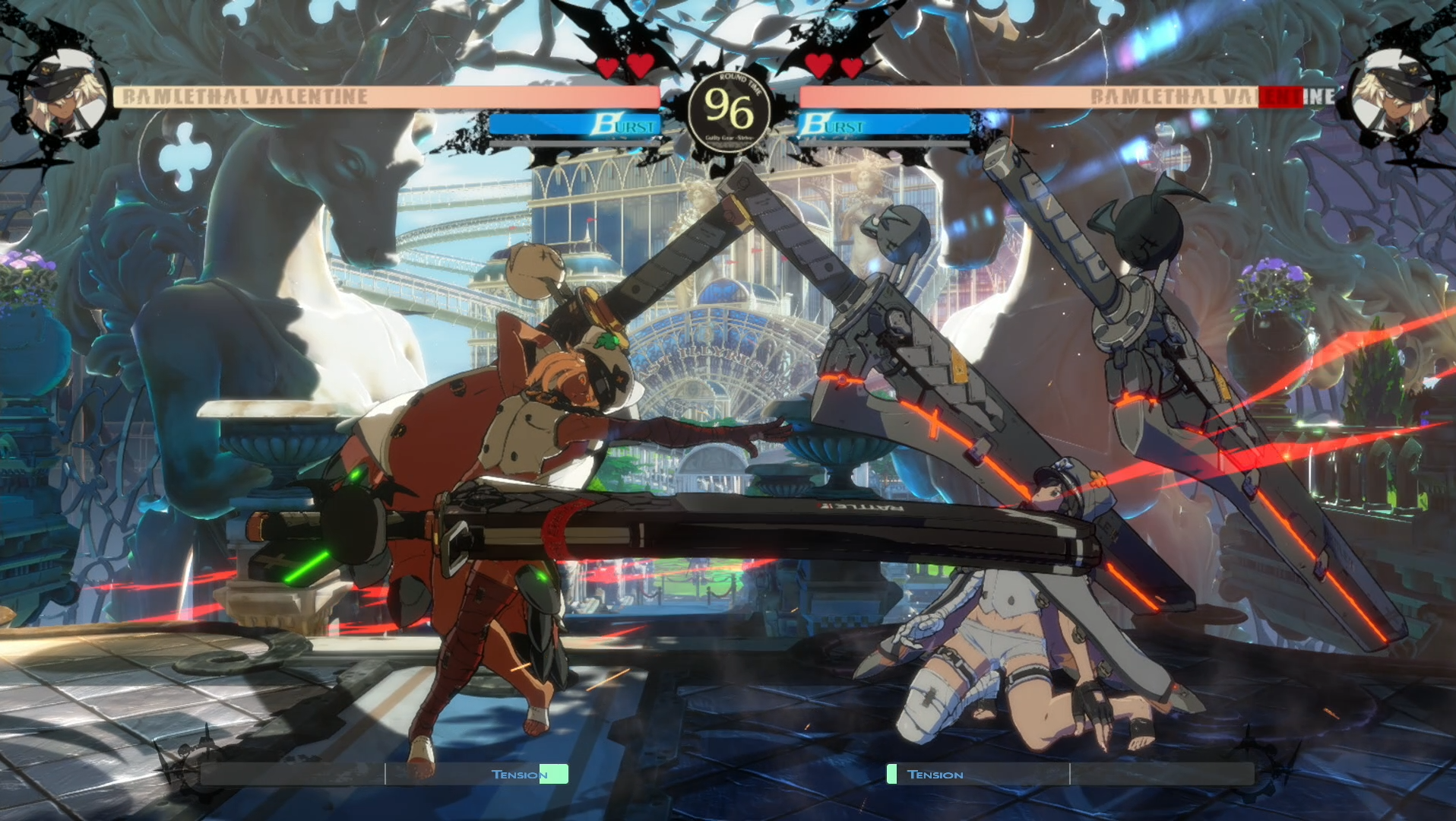 After trying out the Guilty Gear Strive open beta for a couple of days ahead of the upcoming 18th February session, I can safely say that as a fighting game fan and connoisseur that this might be the step in the right direction if they plan on refreshing the series. Classic players will need to readjust their muscle memory and playstyles in this new Guilty Gear if the “slower” air dashes, the defensive shift of the overall game, and new damage scaling are of any indication. Newer players will get a nice choice of characters to get into the groove of the series since it feels like a clean slate from Xrd, gameplay-wise.

I’ll be talking about the main highlights of this open beta: the new challengers in the anime fighter ring. As with any new entry in a long-spanning fighting game series, your new characters will be the crux in which to build your revised fighting game foundation. So far, both of them serve two different playstyles that complement the direction of this new Guilty Gear.Â

Let’s dive right into the two. Just one disclaimer: all inputs are using number notations since that’s the trend for anime fighters. So a QCF+button input is 236[Button].

Wolf In The Fold 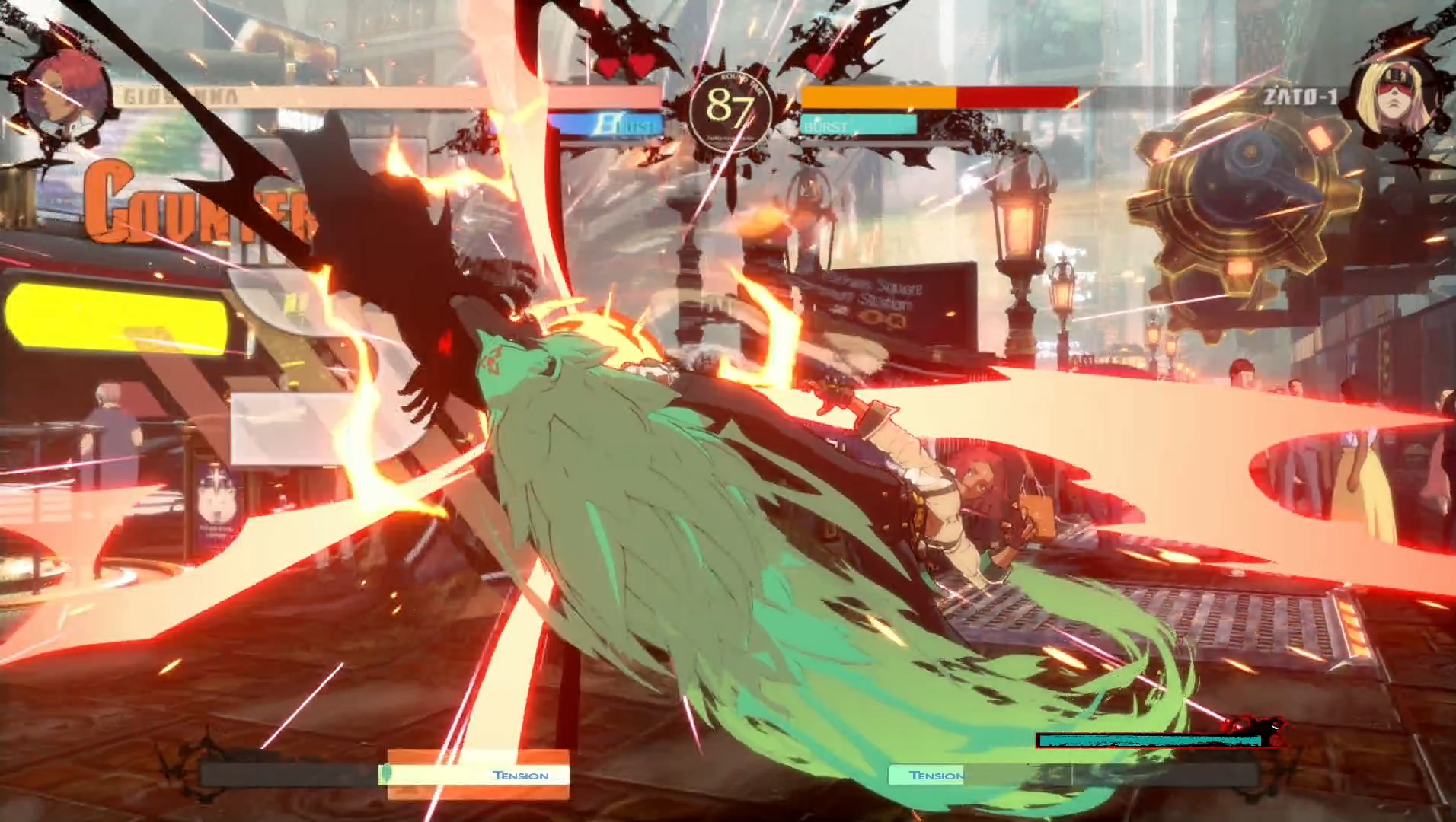 The first of the new cast members in the next Guilty Gear game is Giovanna, a red-haired woman who fights with a wolf on her shoulder. The wolf’s there to power up Giovanna when she unleashes her barrage of kicks, with her general gameplan being to overwhelm the opponent with offense and not letting up.

Her moves allow her to set up tricky cross-ups and closing the gap; the latter is done with her forward rush attack Trovao (236K). Use Sepultura (214K) to end combos and poke foes, and use Sol Poente (214S) to get ready said cross-up shenanigans when you score a hard knockdown. If you can pressure your opponent to press buttons, all the better: Giovanna’s moves can be followed-up further if your opponent’s in a counter state. She has fast and high-priority attacks, so it’s pretty tough to snuff her offense when she’s up close, short of an invincible anti-air.

While she has very good buttons, mixups, and cross-ups she has terrible range. Even her Trovao lunge, which is tough to punish since it recovers really quick, can be reacted to in high-level play if your offence gets predictable.

Still, Giovanna is the best rushdown characters for folks new to Guilty Gear. Series veterans Millia Rage and Chipp Zanuff do take up the rushdown slots, but they’re meant for veterans who are accustomed to Guilty Gear’s anime fighter stylings. Giovanna’s straightforward gameplay and tools will accommodate fighting game fans and newbies trying their hand at the deep end of the Guilty Gear pool, which is incredibly in-depth if I’m being sincere here.

Because of this, I suspect she’s going to be the most-played character in the open beta and the final game. Plus, who wouldn’t want to play as a cute & peppy redhead with a good green boy as a wicked Stand? 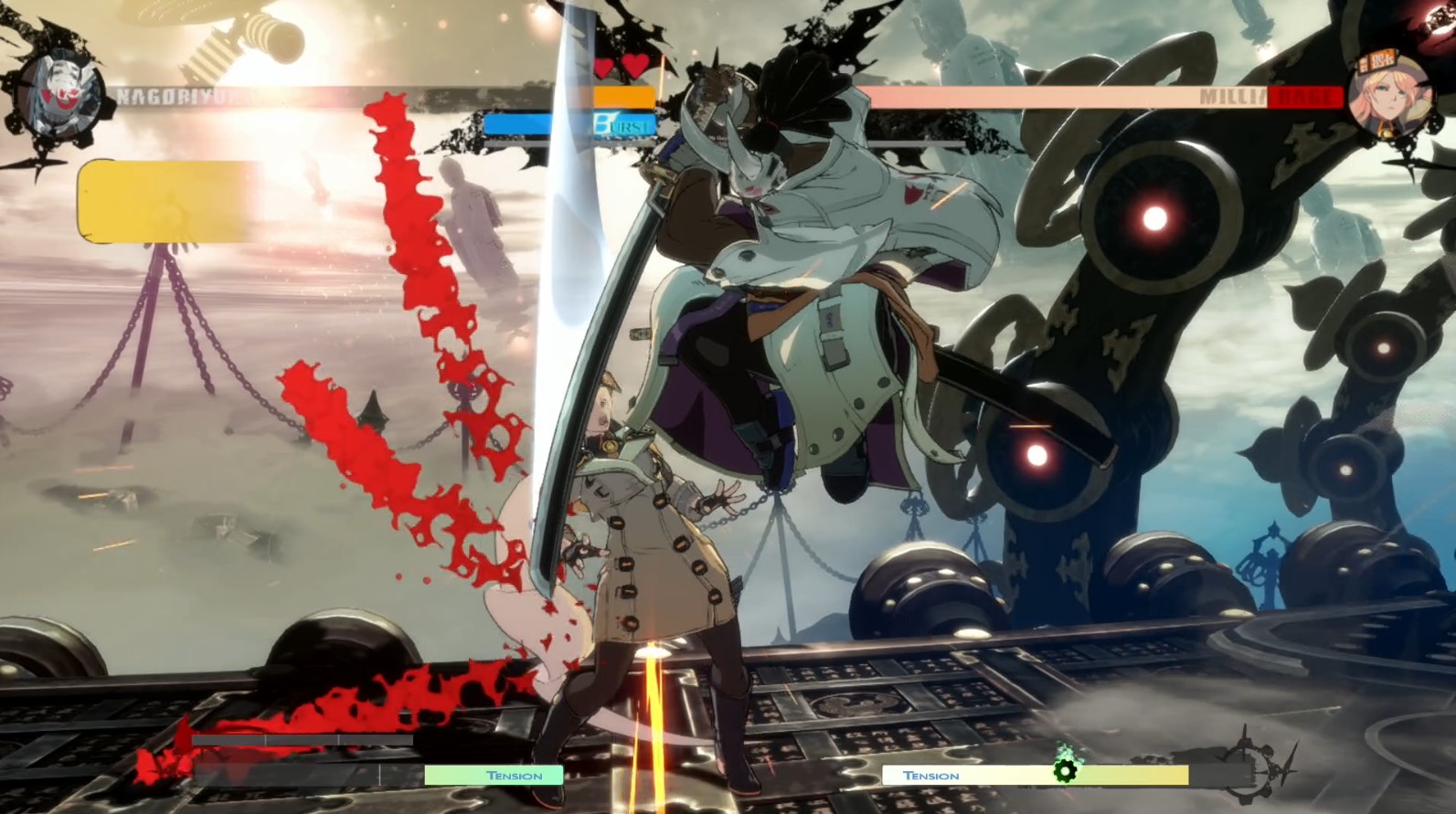 In contrast, black vampire samurai Nagoriyuki feels like an anti-Guilty Gear character. He does not have a regular dash/air dash. He has slow moves and a few combo options when compared to the likes of all-rounders Sol Badguy and Ky Kiske.

However, he can outzone and outpoke everybody in the current roster, even against Zato-1 and Faust who have their own zoning and footsies-ing capabilities. Compared to the series’ heavy hitter Potemkin, who requires his opponents to be up-close for maximum game-ending damage, Nagoriyuki excels at keeping opponents the hell away while closing the gap. His 2HS (crouching slash that covers half the screen) and S three-hit target combo can help keep foes at bay.

The latter can be cancelled to a fast special as long as you don’t go straight to the third hit in the sequence. Cancel the second and third hit to an appropriate special? Or cancel it to nothing to fish a whiffed move? Yes, you can!

Nagoriyuki also comes with a Blood Rage mechanic: when his Blood meter gets full via his special moves like his Zarameyuki (236S) and his Fukyo command dash (236K/214K), he goes in a Blood Rage stance for a limited time. His pokes and footsie tools have more range and he gains access to a super-fast full-screen Overdrive move, but at the cost of a depleting lifebar and special moves access for a set amount of time.

To keep his Blood Rage in check, you have to land hits using Nagoriyuki’s normal attacks to keep it from rising. You can also get out of Blood Rage by using his Zansetsu Overdrive (642146HS). It’s not a bad idea to be in Blood Rage, but if your opponent can somehow get around it, it could mean a huge life disadvantage for you. It’s inadvisable to be in Blood Rage if you’re less than a quarter of health and your opponent is away from the corner.

Basically, this is the game’s way of telling you not to rely too much on the samurai’s specials if you’re planning on spacing out your foes, especially if you end up eating a combo or two prior. So try not to get opponents like Chipp or Millia in when you can; at the very least, he has his Shizuriyuki anti-air (623HS) and Kamuriyuki (214HS) to get him out of some tight spots. Still, if you manage to reduce your opponent to less than half health with great spacing and footsies without activating Blood Rage (or rely on it less), you’re using Nagoriyuki right.

As with most Arc System Works titles, Guilty Gear Strive’s art style and music is still phenomenal; lovely backgrounds, rockin’ stage anthems with a mix of metal & “chillax” rock, awesome characters in motions with appropriate zooming in shots of them doing their signature Overdrives. The captions that pop up whenever you land a counter hit or punish do appear in huge fonts, but they only appear for a split second and are in the background. The particle effects and whatnot from special moves are plentiful, but do not deter from the main action on-screen.

Everything from guard pushback to punishes, to even the clock that pops up when you do a combo-extending Roman Cancel just makes everything easily understandable on-screen for both players and bystanders without being absolute clutter. True, it does seem like that in static screenshots, but it’s all good when in motion. Honestly, that slowdown effect for counterattacks and major cancel effects is sorely needed in a game that’s as hectic as the Guilty Gear series.

One caveat: there are only 13 characters in the game so far. While that’s fine for an open beta, it does make a lot of people wonder how the team will expand this. For comparison, Guilty Gear Xrd had 17 characters before its sequel REV 2 came into the picture. At this point in time from now, Arc System Work might probably bring in Season Pass DLCs into the picture to beef up the roster with favourites and new characters. 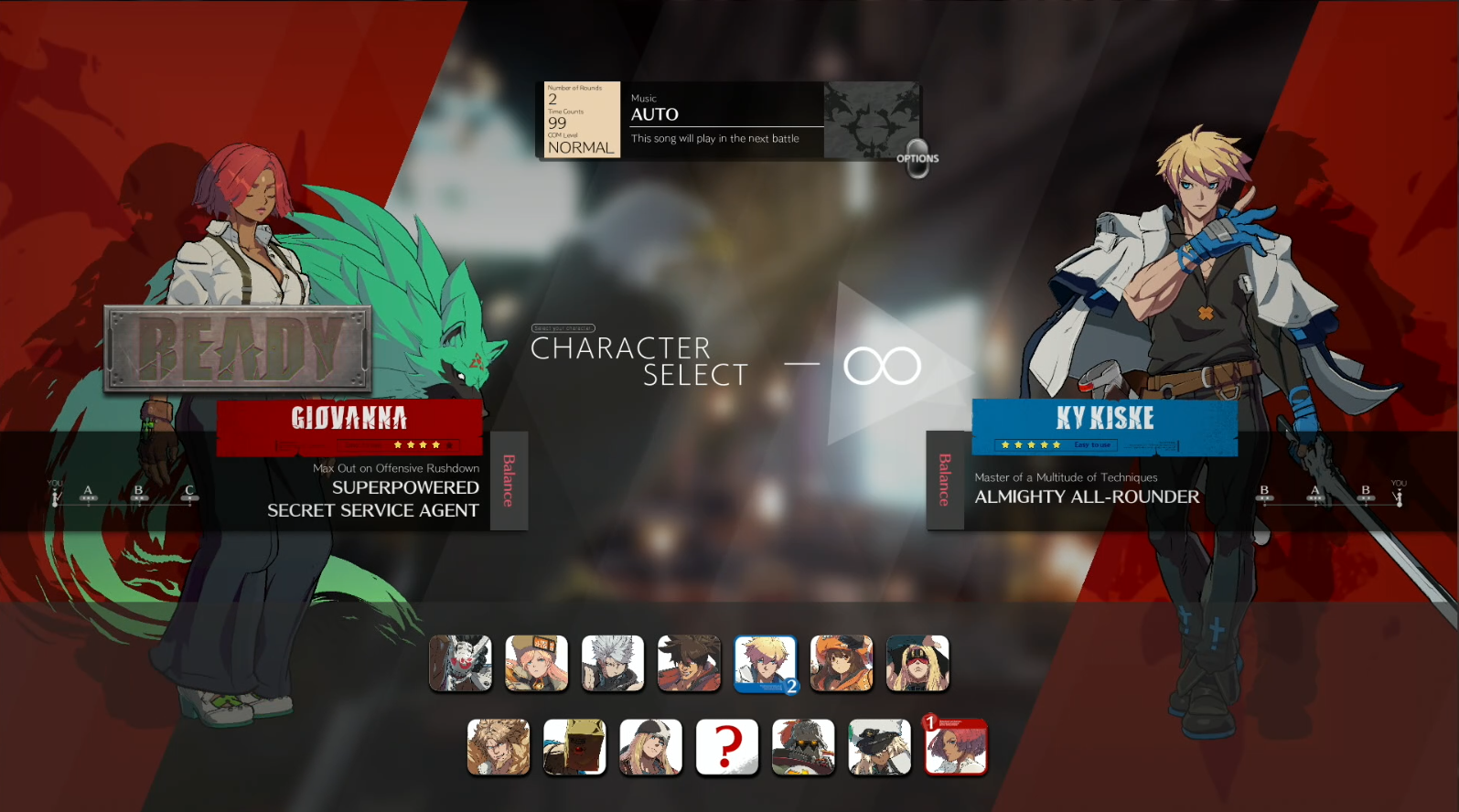 They’ve done it before with BlazBlue Cross Tag Battle and Granblue Fantasy Versus, and I’m very sure they’ll use this same plan for their rockin’ new baby boy. Old habits die hard, I guess?

In case it wasn’t made clear, Guilty Gear Strive’s new direction from my point of view is the game being less of a throwback like Xrd/REV 2 and more like a “brand new experience” that may be friendlier to newcomers. And with Street Fighter and Tekken still having a bigger fanbase, Arc System Work may need all the help they can get in making this Guilty Gear a tad more accessible.

The game isn’t dumbed down, far from it. Your Chipp and Millia combos and mixups are still intact, just with some slight readjusting due to a reworked 2D fighting game engine. And if recent high-level gameplay that’s been surfacing is of any indication, there is still a high ceiling gap for some of the cast like the puppet fighter Zato-1 and chaos incarnate Faust. But in terms of streamlining some mechanics like Dust Loops and Roman Cancels while preserving that anime fighter flavour, this new entry looks promising.

Whether the grand experiment will succeed will depend on its eventual release and post-launch reception, that’s really something we can’t predict. Let’s hope the beta weekend shines more positive light onto Daisuke Ishiwatari’s child, because it may need a bit more convincing for fighting game boomers.

The Guilty Gear Strive open beta will be happening from 18th to 21st February (PST). The actual game will be out 6th April for PS4 and PS5. In the meantime, enjoy the latest in Faust’s obligatory funny Overdrive reactions.

This article was published on 19th December. New info has come to light since 16th January 2021, thus we've updated this piece accordingly as the stor...

Reviews
Cathedral Ticks All The 2D Action Boxes, But Doesn't Do Anything New