Resident Evil Village Is The Most Bats*** Insane The Series Has Been, & I Love It

The fourth mothership Resident Evil game back in 2002 really did spoil the survival horror market. Many games did try to emulate its success. Heck, even Capcom tried to one-up its impact with Resident Evil 5 and Resident Evil 6 to mixed reception. But at the same time, RE4 introduced a lot of innovations and freshened up a series that was getting stagnant.

Resident Evil Village is clearly Capcom’s way of rebooting Resident Evil 4, but with the new storyline and tone that started from Resident Evil 7. And also bring it to a European village/castle setting straight out of films like Crimson Peak, which happens to be ruled by a messload of monsters & biohazards (heh). Monsters that will make RE4’s Sadler look normal by comparison.

The result is an incredibly well-made and expansiveÂ Resident Evil entry that stands out with its zaniness and over-the-top narrative.

RE Village’s story picks off 3 years after Resident Evil 7. Main character Ethan Winters, his wife Mia, and their daughter rose are living in peace but tragedy soon struck thanks to a mutual ally in the RE canon. And after being kidnapped, Ethan gets stranded in the middle of nowhere, close to said European locale. Realizing his daughter is kidnapped, he aims to find her in the vicinity, not knowing the horrors that wait.

And yes, the horrors are aplenty and will delight. RE Village’s main adversaries are a family of scary movie tropes ranging from a demon fish mutant to a vampiric noblewoman who happens to be the internet’s treasured step-on-me darling since January’s RE Village promo video.

I won’t go too much into detail with the plot, because it’s really good and well-paced while sticking true to the series’ pretty far-out canon and logic train. It may not be as fearful as RE7, but RE Village has its own brand of creepiness to go along with the action beats.

Barring one part which I will hint at later, the game’s narrative flow will please long-time RE fans and will also get some new ones on board. You may need a bit of RE7 context; luckily RE Village asks if you need a quick recap of the previous entry from the get-go. 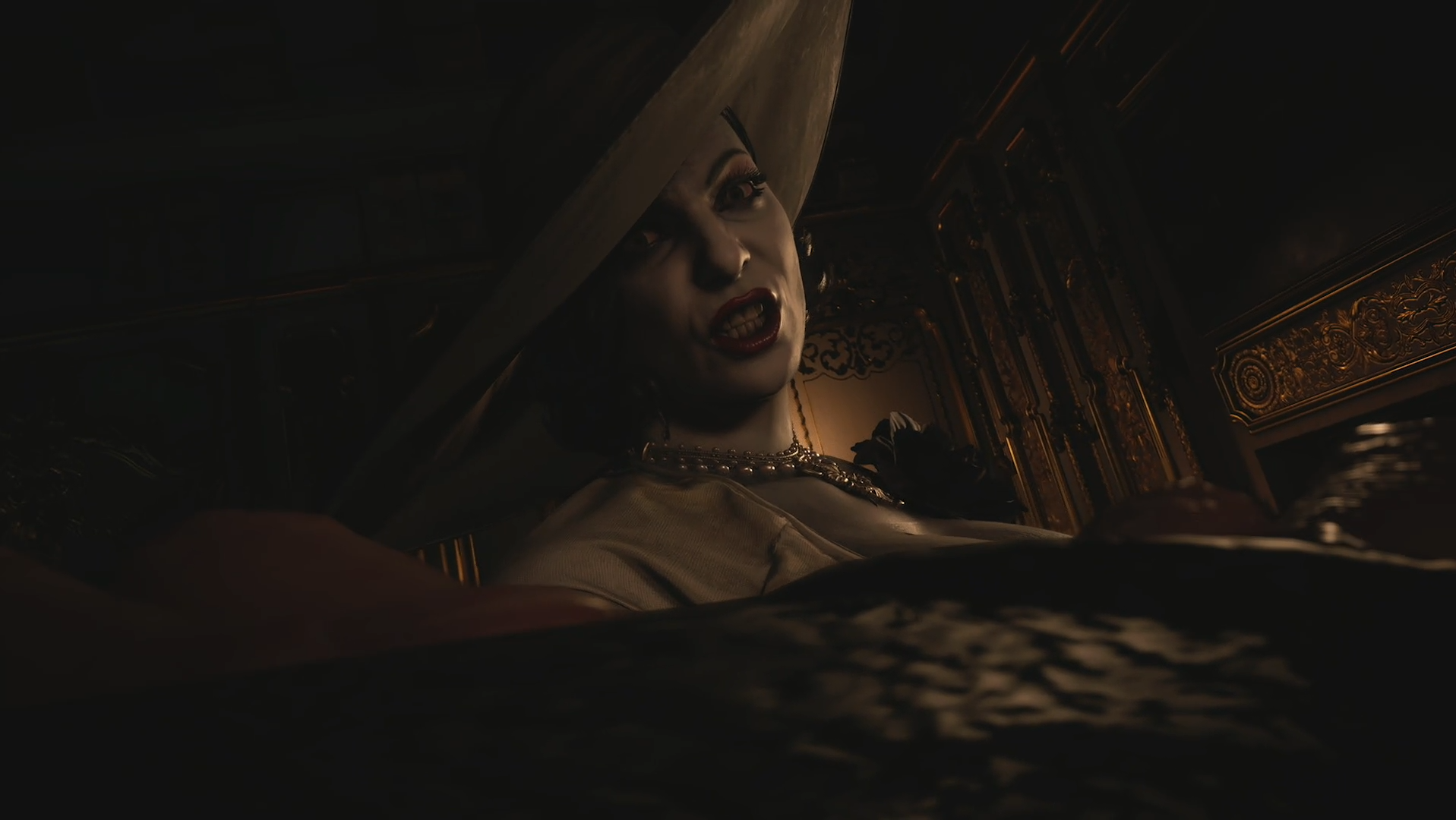 Just like RE7, the whole game is played in a first-person perspective. That means everything feels a tad more immersive from Ethan doing simple crank-turning actions to power up generators to even seeing how textured both his hands are when he’s blocking enemy attacks. I cannot stress how beautiful and horrific this game looks and sounds; Capcom has found many ways to make its proprietary game engine look slick and incredibly presentable.

Unlike RE7 though, Ethan here has some combat training, meaning he can defend himself and can use guns competently. He can even block some incoming attacks from enemies; not only does it lessen damage received, but a perfect guard will make Ethan knock enemies away from him. This is pretty handy in both anticipating attacks and also for escaping a mob.

Still, he’s still weak and fights alone in RE Village. Knowing when to fight and when to flee, which can be frequent if you want to conserve ammo & strength, is essential in the dangerous unnamed village you’re trapped in. In fact there’s a section in Castle Dimitrescu where you really need to play defensively and sneak around because the resident’s owner clomps around and will slowly give chase like Mr. X in the RE2 Remake.

Add to the fact that you have to experience all of this in first-person makes it all the more intense and dread-filled (compared to the RE2 and RE3 remake’s third-person viewpoint). 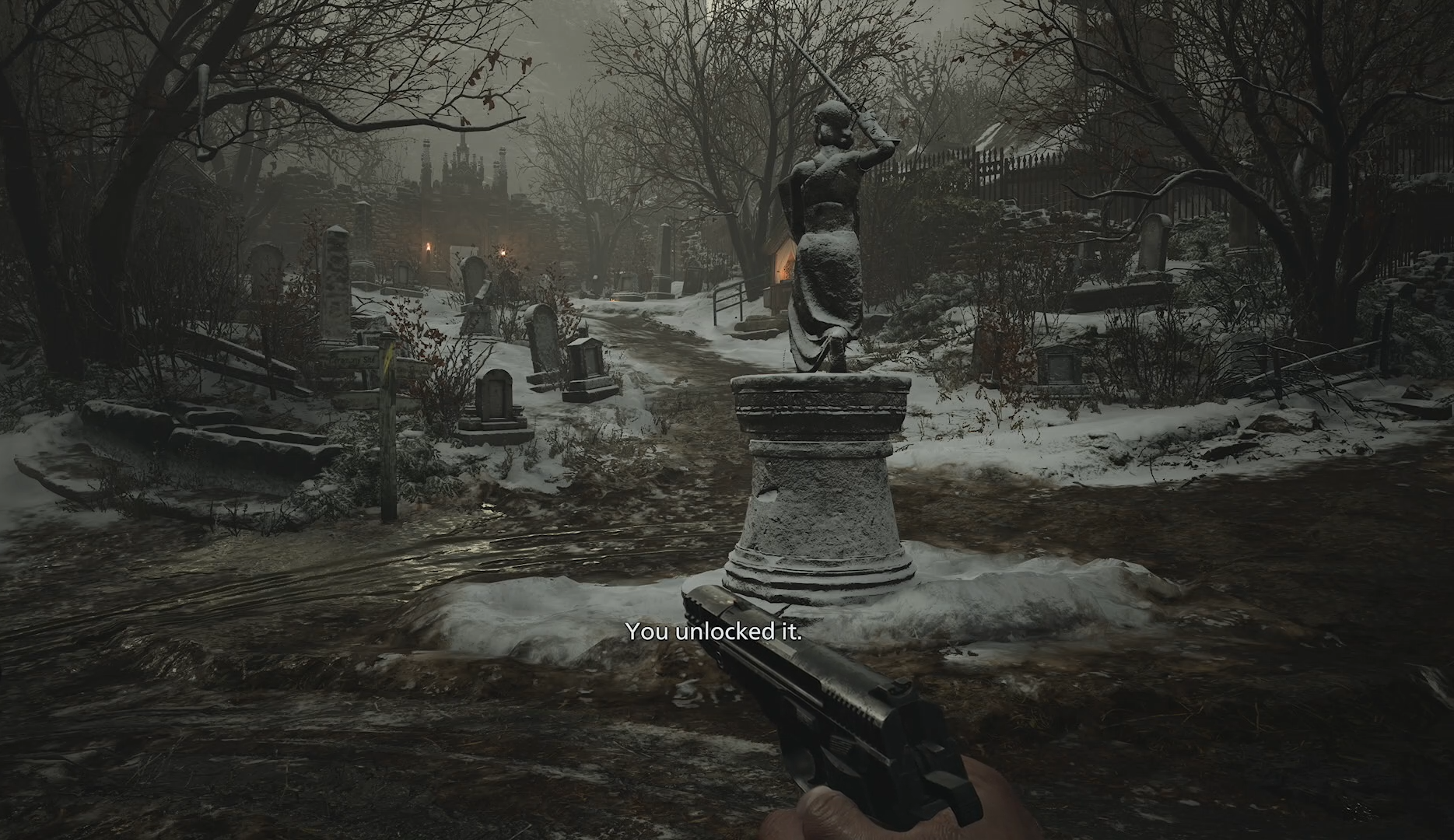 I adore RE Village because it balances combat gameplay and puzzle-solving very well. Yes, you still need to defend yourself and get equipped to fend off lycans, a vampire mom and her daughters, zombies, and the occasional alpha lycan with a bullet sponge health bar. But you’ll also need to use a bit of logic and intuition for a good number of the game’s brain-teasers, search for keys & puzzle items, and also find a way to cross a large river from point A to B without getting eaten by a giant fish.

You’ll also have to do these non-combat segments in eery stages where music doesn’t even play, adding to the dread that something is going to show up and haunt you. I predict the game’s Beneviento stage is going to be on a lot of horror gamer’s mind for years to come.

The game is at its best when you’re enthralled with either the main story stage you’re trapped in, or when you’re taking your time exploring the hellscape you’re in. All this is set in an interconnected and well plotted-out village area with its secrets, optional treasure troves guarded by stronger-than-usual enemies, and caches that can be opened up with the right tools. Honestly, RE Village’s setting is a lot denser than its predecessors.

I can’t say much more due to story reasons, but RE Village nails the balance of gameplay, exploration, and narrative very well. However, if you’re a survival horror veteran, start playing the game on Hardcore to get the most out of survival and the thrill of ammo scarcity in a lycan mob-filled hellhole. You will be challenged. 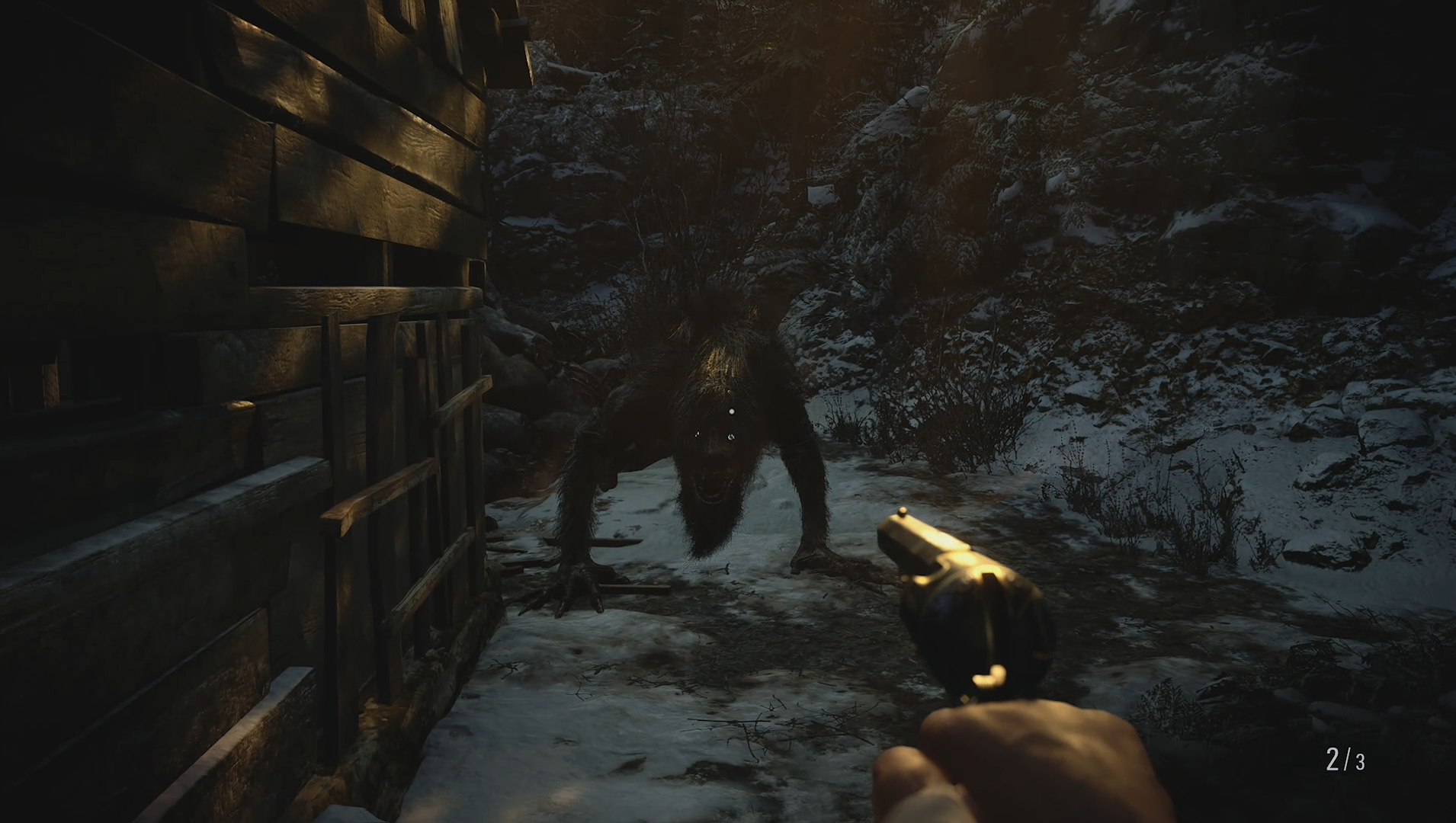 Speaking of which, the enemy variety here is way better than the past RE games, especially part 7. The boss fights are part puzzle and part brute force. You still need to load up and fire, but their weak points and attack patterns vary. All of them are just as fun and arguably better than your William Burkin showdowns and Nemesis tussles in past games.

Thankfully, you can arm yourself thanks to a merchant called The Duke. His role as de facto shopkeeper hammers home the fact that RE Village is acting as RE4’s cousin: this fat jolly man sells you weapons, weapon upgrades, ammo, and essential items. He can also buy the treasures you are willing to sell, as well as give you permanent upgrades as long as you find him raw ingredients for his cooking.

The catch? He does have limited stock on all his items, so even if you end up with a lot of money from treasures, he may be out of shotgun shells that you need. This means that you will need to explore and scavenge within the village and other areas like a bilge rat. While his store is not the be-all-end-all game breaker, it can help strengthen your kit and even the odds. 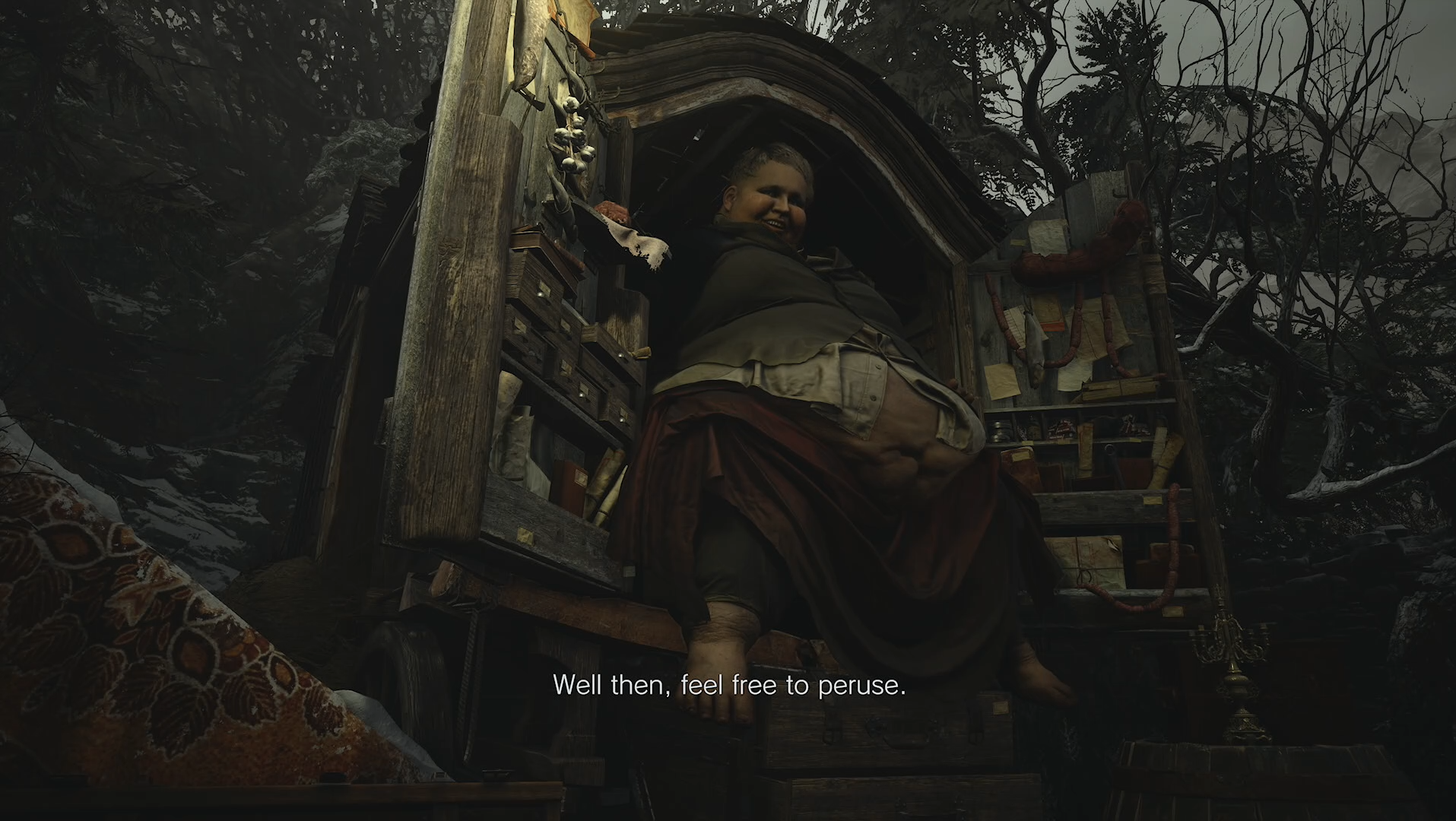 RE Village also begs for replayability. Even after my 10 to 12 hour venture in this crazy backwood nightmare, there are New Game Plus options and also the most-requested Mercenaries mode where you play the game arcade shooter style in a bunch of short stages tailored after the main campaign’s backdrop. They’re both fun in their own right and will cater to score hounds and survival horror fans who want to test their speedrun capabilities in this eighth instalment.

The whole of RE Village would be perfect were it not for one particular penultimate stage in the game. I can’t be descriptive due to story spoiler reasons, but it’s a stage that goes on far too long than it should, it has a huge tone and aesthetic shift that’s jarring from the rest of the game (even for RE standards), and features enemies and stage designs that are right out of a rejected Wolfenstein: New Order idea.

At least this sour note was punctuated with a pretty awesome-if-insane boss fight, along with other RE twists and turns that follow. 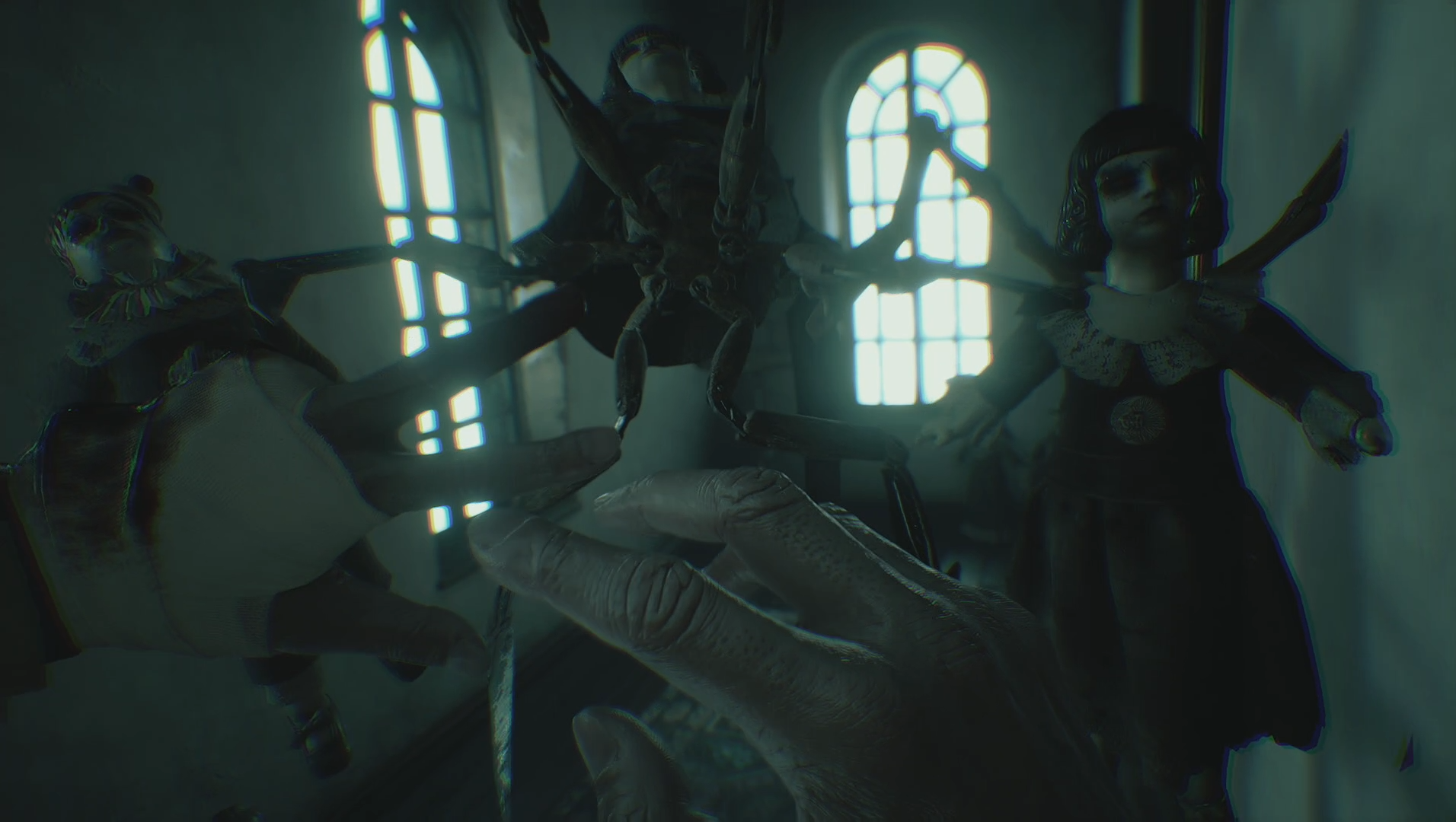 The best part about Resident Evil Village is not just how it combines all of its crazy aspects and make them fit in an insane survival horror setting. Rather, it’s clear proof of Capcom refining its gameplay from the previous entry while making it a fitting tribute to Resident Evil 4 but with a bigger scope.

Sure, the game kind of drags a bit at the beginning, and that aforementioned stage is a huge mood-killer. But once you set foot in the village, there is no stopping this horror game train. Not even its faults can upend this magnificent tribute.

*Review copy provided by Capcom. Played on both an Xbox Series X and PS5.

Ubisoft has announced the official release date for Assassinâ€™s Creed Odyssey The Fate Of Atlantis, the second post-launch story content for the...

To say that Bandai Namco's upcoming RPG Code Vein is a Dark Souls knockoff but anime and sci-fi is disingenuous, but not entirely inaccurate.Â The c...

Back in August 2020, Sucker Punched announced Ghost Of Tsushima Legends; a new online co-op multiplayer mode which would arrive in a free update. Now...