After many triumphs over the years, both parties in the Yoodo â€“ Yoodo Gank partnership have announced an amicable end to their three-year-long successful partnership.Â

Yoodo first signed on to back the PUBG Mobile esports team, after they swept the championship trophy at PUBG Mobile National Championship (PMNC) 2018. Yoodo was also the Official Digital Telco at the tournament.Â

Through the three years together, the Yoodo Gank team have risen high and proven their mettle repeatedly and most notably in three championships (PMNC 2018, Selangor Cyber Cup 2019, PMPL SEA 2020) emerging as a force to be reckoned with amongst the PUBG Mobile community. With Yoodoâ€™s strong support, the team expanded their influence further through the Yoodo esports community and various marketing and publicity initiatives, creating a formidable brand presence.

One of the most memorable moments for both parties includes Yoodo Gankâ€™s historic, record-setting first place win at the PUBG Mobile Pro League (PMPL) Southeast Asia (SEA) 2020, a first in Malaysian history that also earned the team an accolade in The Malaysia Book of Records. 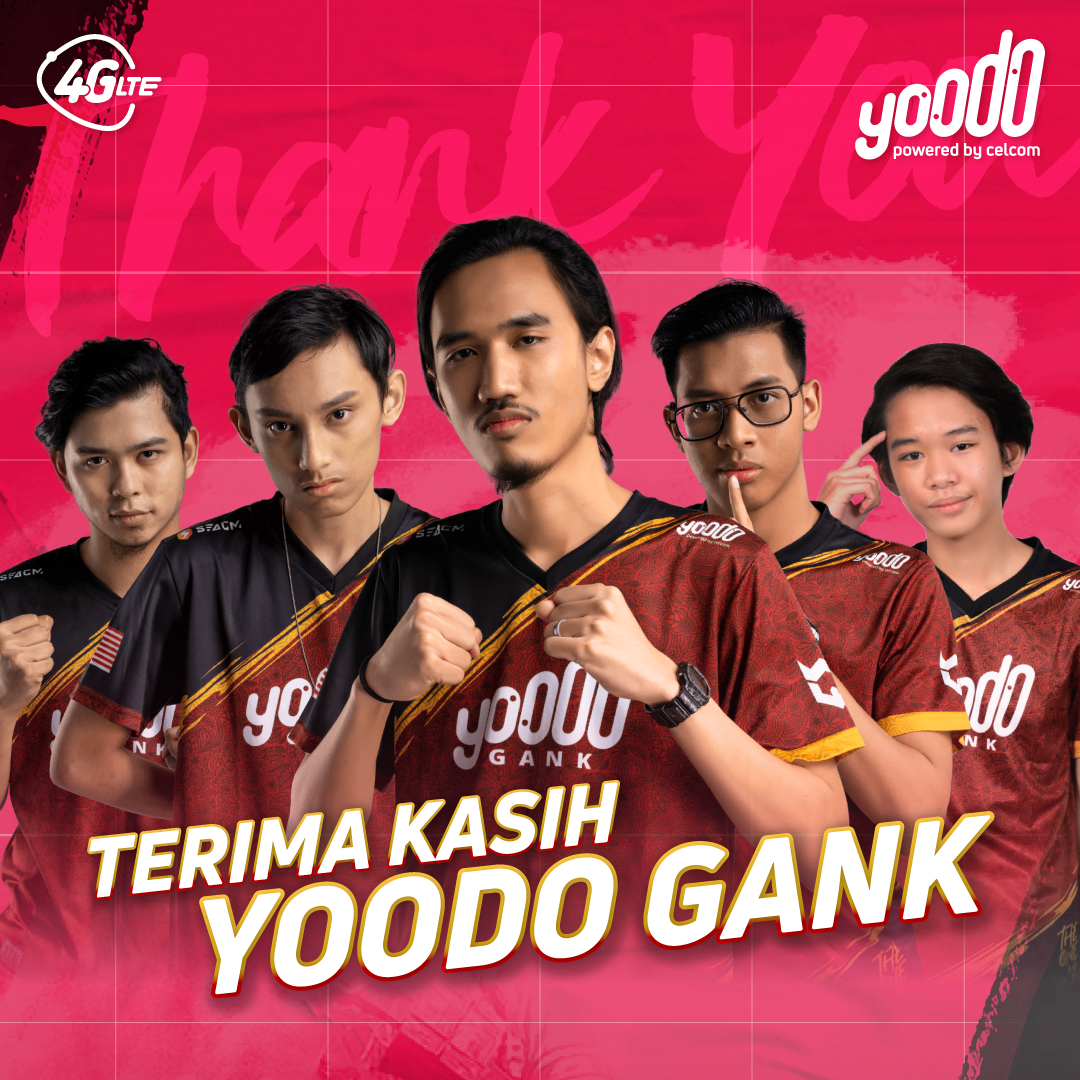 Chow Tuck Mun, Head of Yoodo expressed his best wishes for the Gank team as they move forward in their new direction:

â€œAfter nearly three years of success and growth, itâ€™s time for both Yoodo and the Gank team to move on and continue to grow in our desired directions respectively.

Weâ€™re proud of everything we have achieved together throughout the years, including the teamâ€™s historic win at PMPL SEA in 2020.

Yoodo remains committed to supporting the esports community and we will continue to cheer on the Gank team from afar.”

He added that announcing the Yood Gank team was one of Yoodoâ€™s first forays into the esports world and since then Yoodo has grown into a powerhouse in the gaming segment through various initiatives – the support of Yoodo Gank being one such example.

Commenting on the announcement, Kevin Wong, CEO of Wulf Esports said he was grateful to Yoodo for giving the team a leg up through its strong support in the last three years:

“Yoodo Gank has certainly carved a name for itself amongst gamers and won over many fans through the years.

As we set on a new journey as a team Iâ€™d like to add that weâ€™re incredibly thankful for supporters like Yoodo who have put their faith in the team.

Their relentless support have been invaluable to the development of the. We hope to continue to make the nation proud in the esports arena.”

Yoodo Gank, previously known as Gank.fty, was a strong upcoming team when spotted by Yoodo in 2018. The team is known and followed by gamers and fans of gaming alike for the teamâ€™s killer gaming instincts and down to earth personalities. Aiman Amirul, best known by his In Game Name (IGN): Manparang, team leader of Gank is a well known PUBG player both locally and regionally.Â

â€œWeâ€™re very excited to grow from strength to strength over the years and I look forward to seeing how else we can make the nation proud as we go on this new journey as a team.

Weâ€™d like to thank Yoodo for being by our side through all the ups and downs in the last three years and wish them all the success as they continue to thrill and excite gamers with their on-going plans.”

Both parties are moving on amicably after three great years together. Fans can continue to watch and support both Yoodo at their website: www.yoodo.com or Yoodoâ€™s esports-dedicated platform, www.facebook.com/YoodoEsports; and Gank at https://www.facebook.com/YoodoGankOfficial/ Â for latest updates.

Studio Deen and Toei Animation's Pretty Guardian Sailor Moon Eternal The Movie was originally supposed to release in 2020, but now it's officially goi...

Koei Tecmo and Team Ninja have announced another new original character to debut in the upcoming Dead or Alive 6, and her name is NiCO. What's interes...

News
New Halo Game Set to Be Announced at E3?

The latest Halo game - possibly Halo 6 - will be announced at E32018 and will be called Halo: Infinity according to sources. 'Word on the street' has ...