The seventh episode of Marvelâ€™s What Ifâ€¦?Â is now streaming on Disney+ Hotstar Malaysia. Iâ€™ll be discussing heavy spoilersÂ so if you havenâ€™t seen it or want to avoid spoilers, nowâ€™s your chance to stop reading.

What If… No Loki? 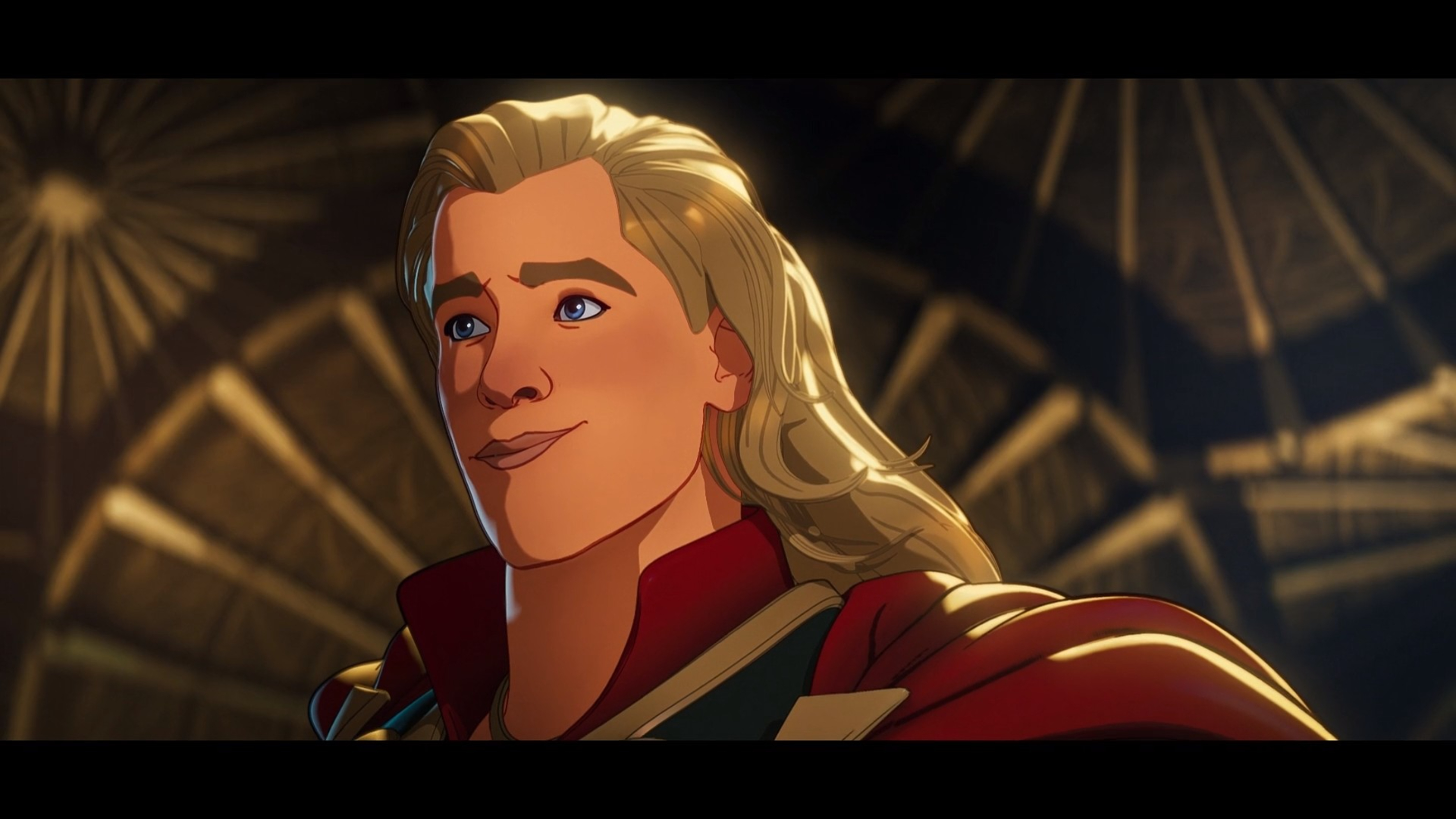 In this universe, Odin never adopted Loki and raised him, which meant that Thor grew up as an only child.

Thor Goes To Party In Las Vegas, Even Howard The Duck Is There 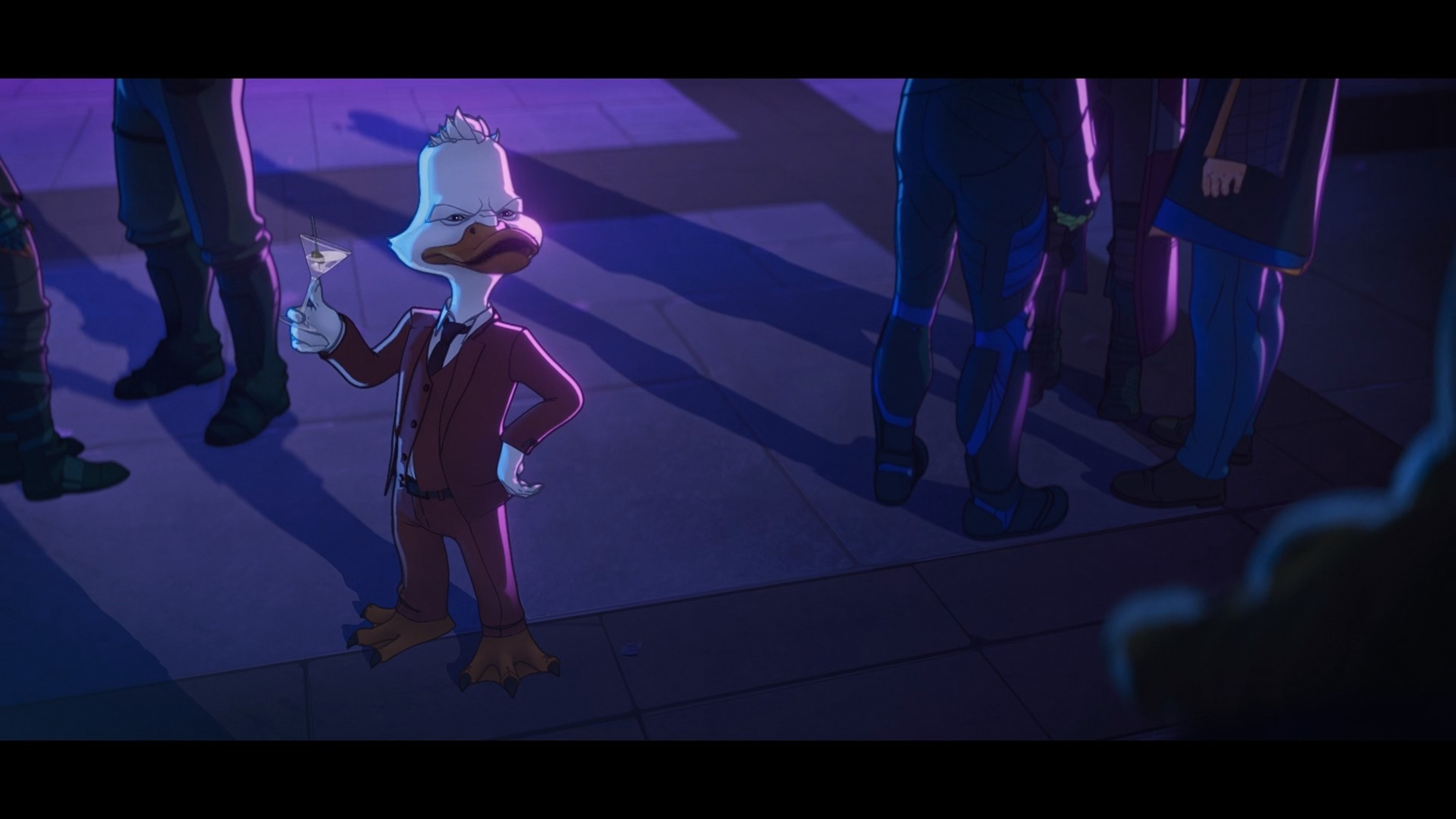 At this point, we’ve probably seen and heard more of Seth Green’s Howard The Duck in the Marvel’s What If…? series than the entire MCU so far.

Heck, Howard even gets to drink and hang out with Darcy (Kat Dennings). It would be a ‘quack’ to see that in live-action. 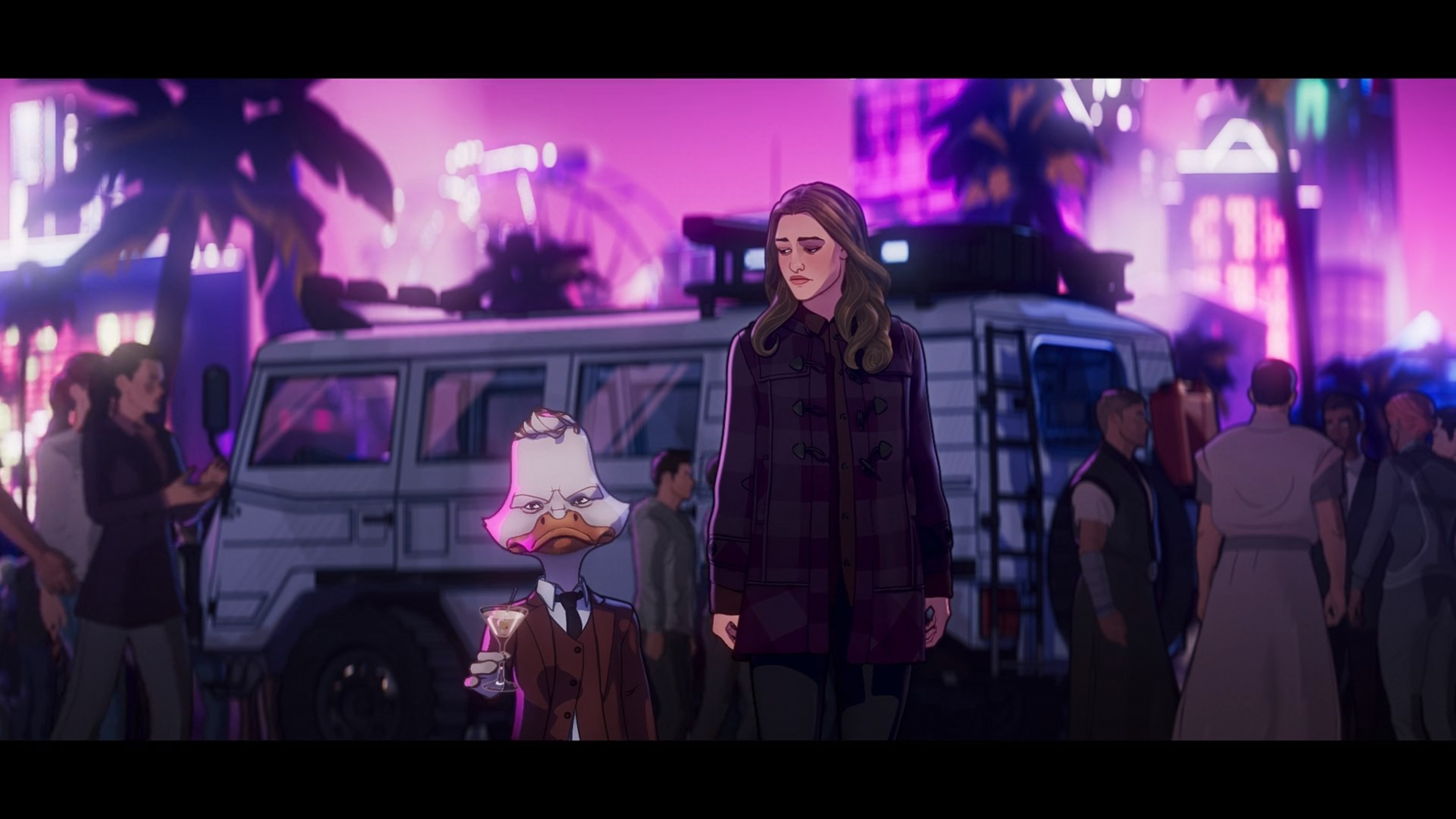 And they even get… married?!! 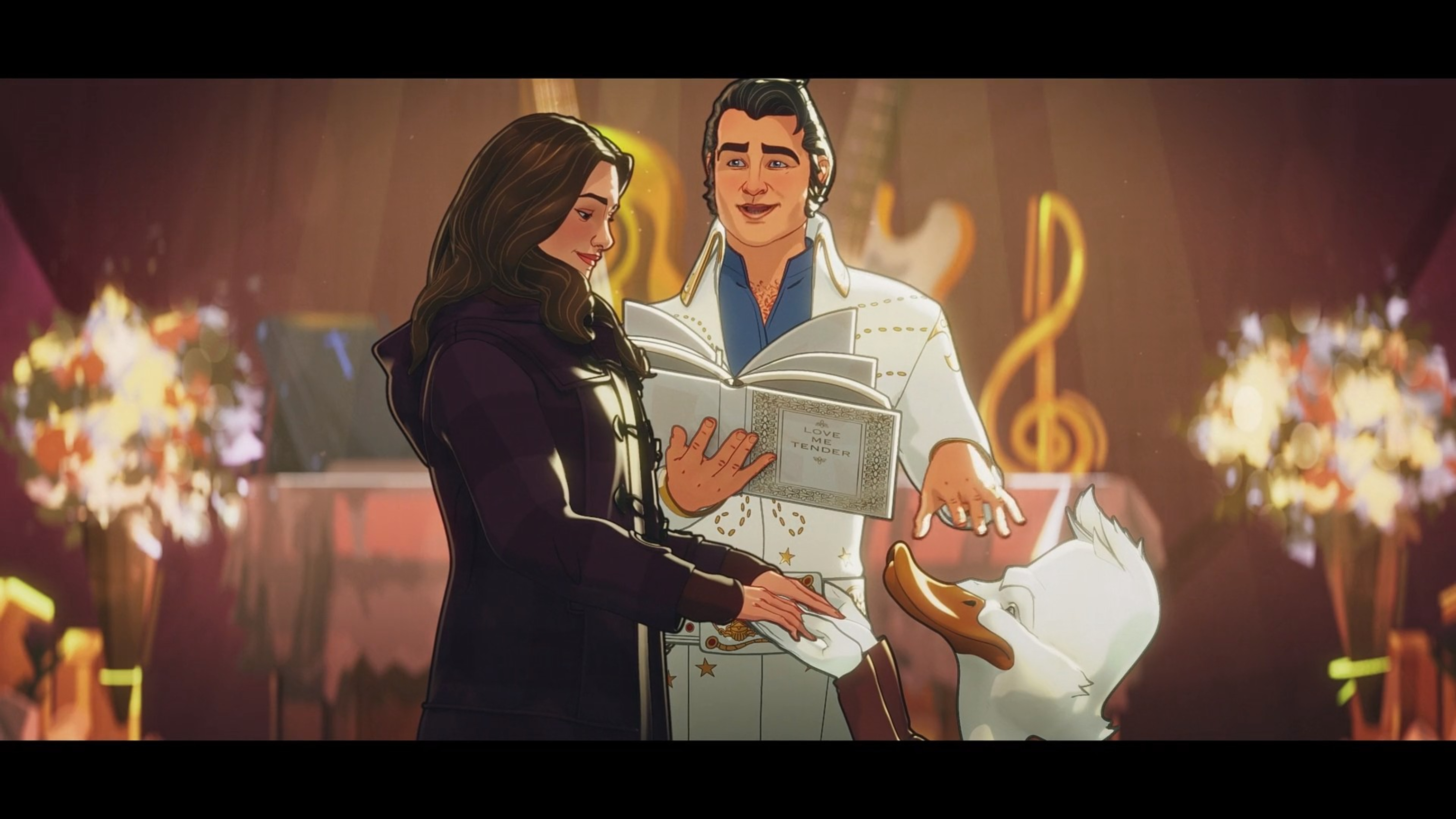 Lots Of Cameos, Including Ayesha From Guardians Of The Galaxy Vol. 2 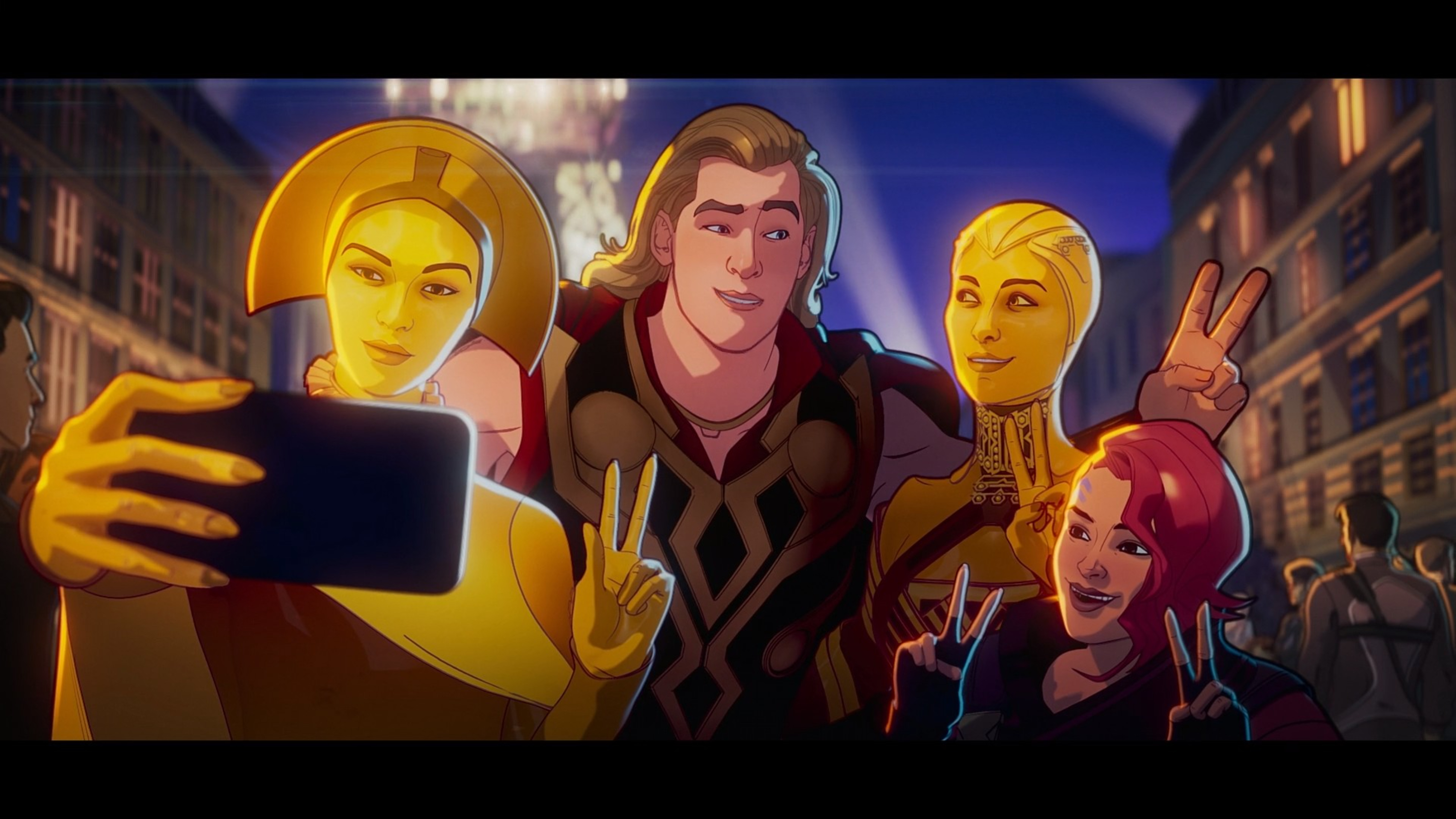 There are a lot of cameos from the MCU in this episode, but seeing one of the antagonists from Guardians Of The Galaxy Vol. 2 AKA Ayesha (portrayed by Elizabeth Debicki in that movie) was unexpected.

This Version Of Loki Looks A Lot More Frost Giant-y 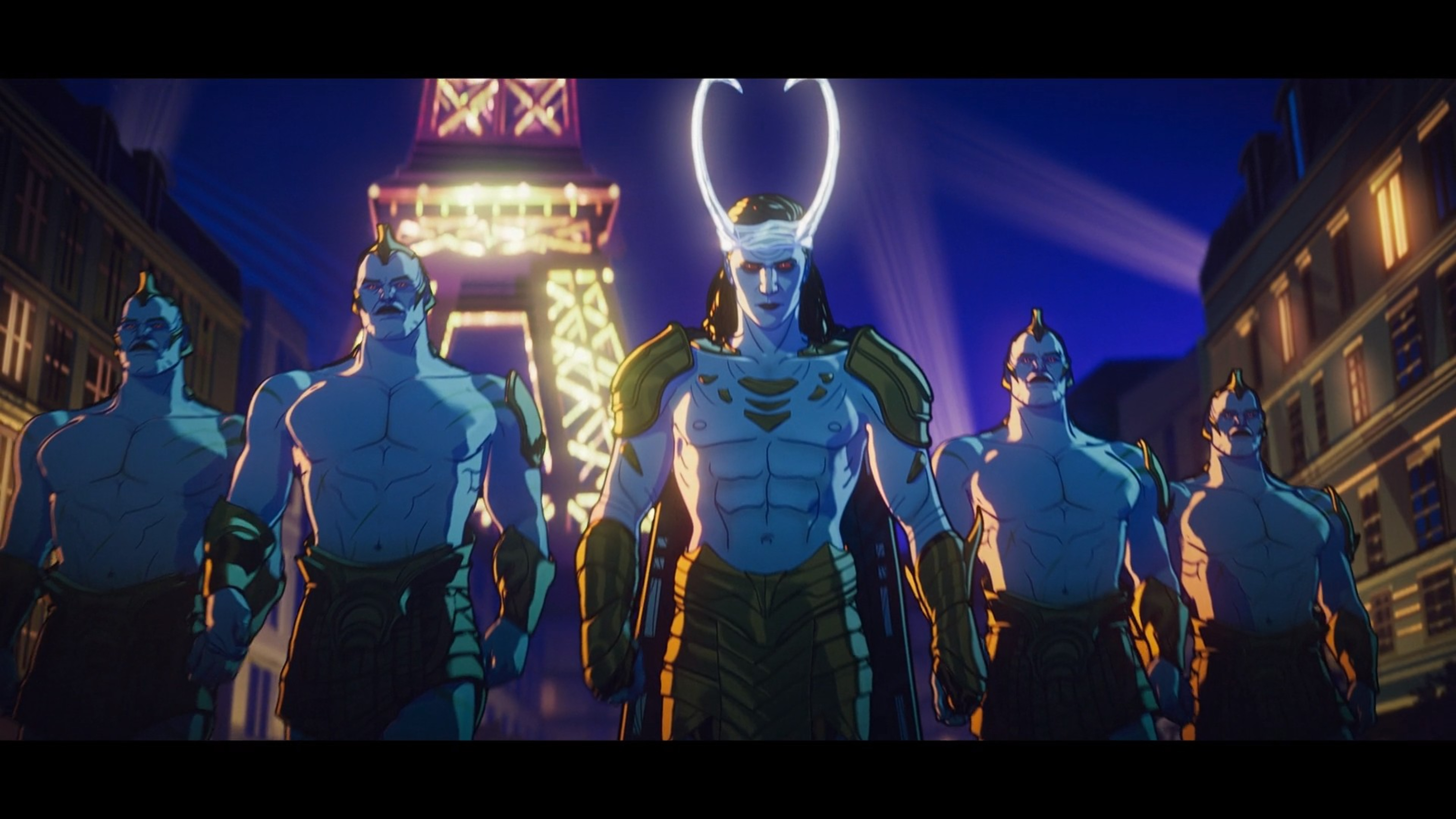 This version of Thor never grew up with Loki but it seems like they’re still somewhat brothers. They’re more like best friends and looks like they’re even closer than the actual brothers who grew up together in the MCU.

What’s interesting is that this version of Loki embraced his Frost Giant heritage and actually looks like a Frost Giant. This is his true and most genuine form. 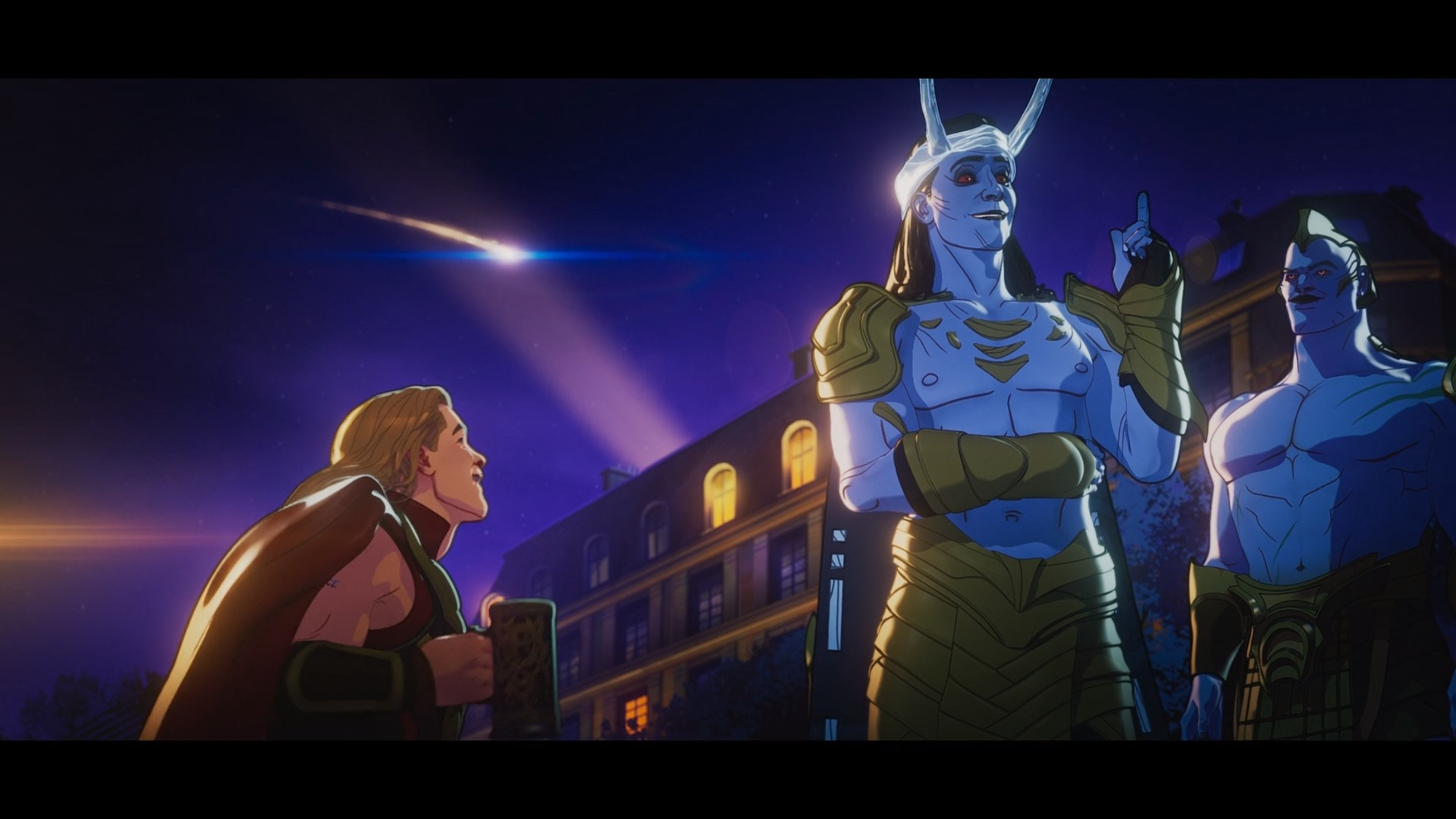 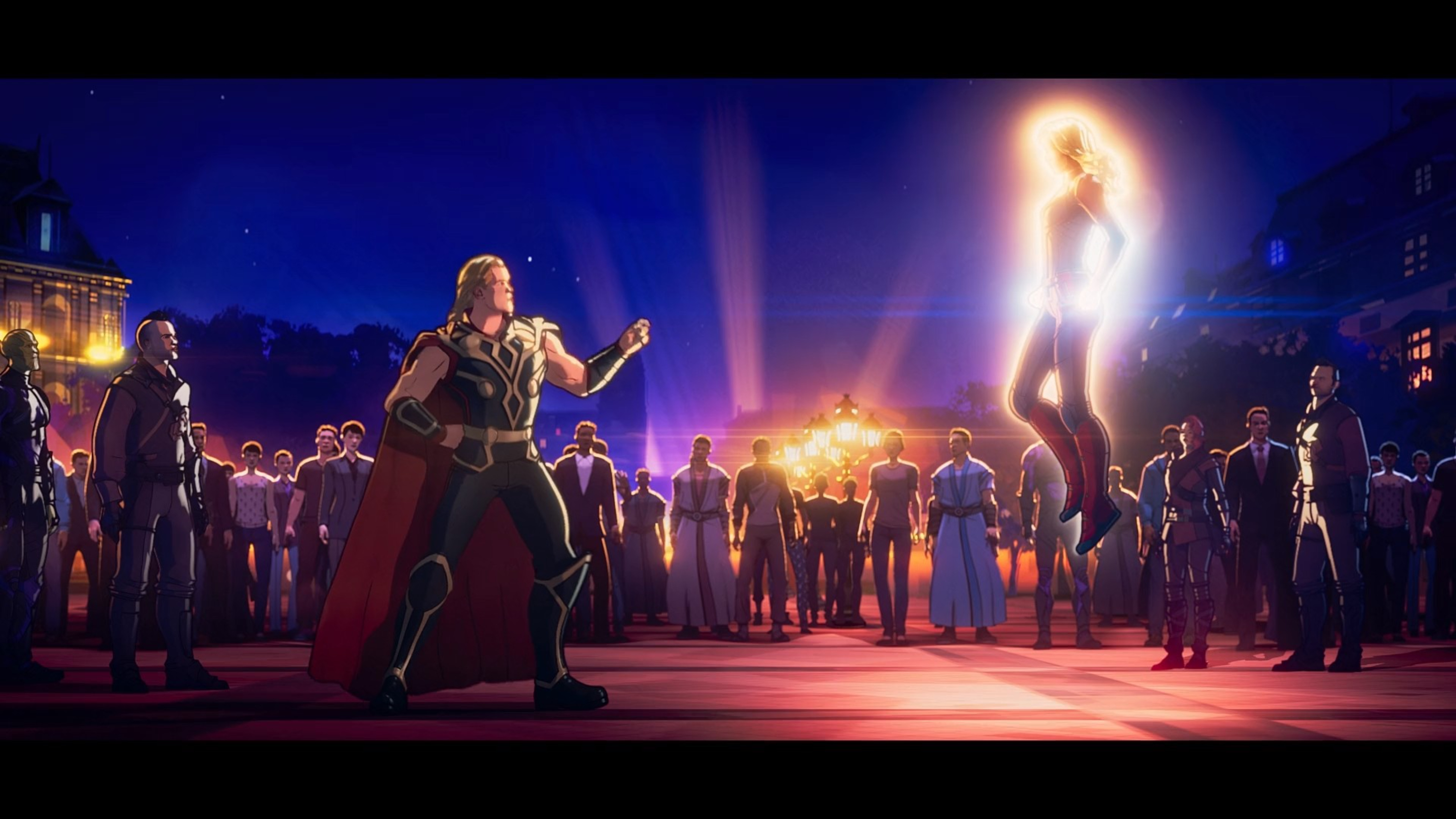 This fight is funny. They punch each other across entire continents like old-timey slapstick cartoons.

Captain Marvel proves that she’s capable of even absorbing the Thunder energy unleashed by Mjolnir. 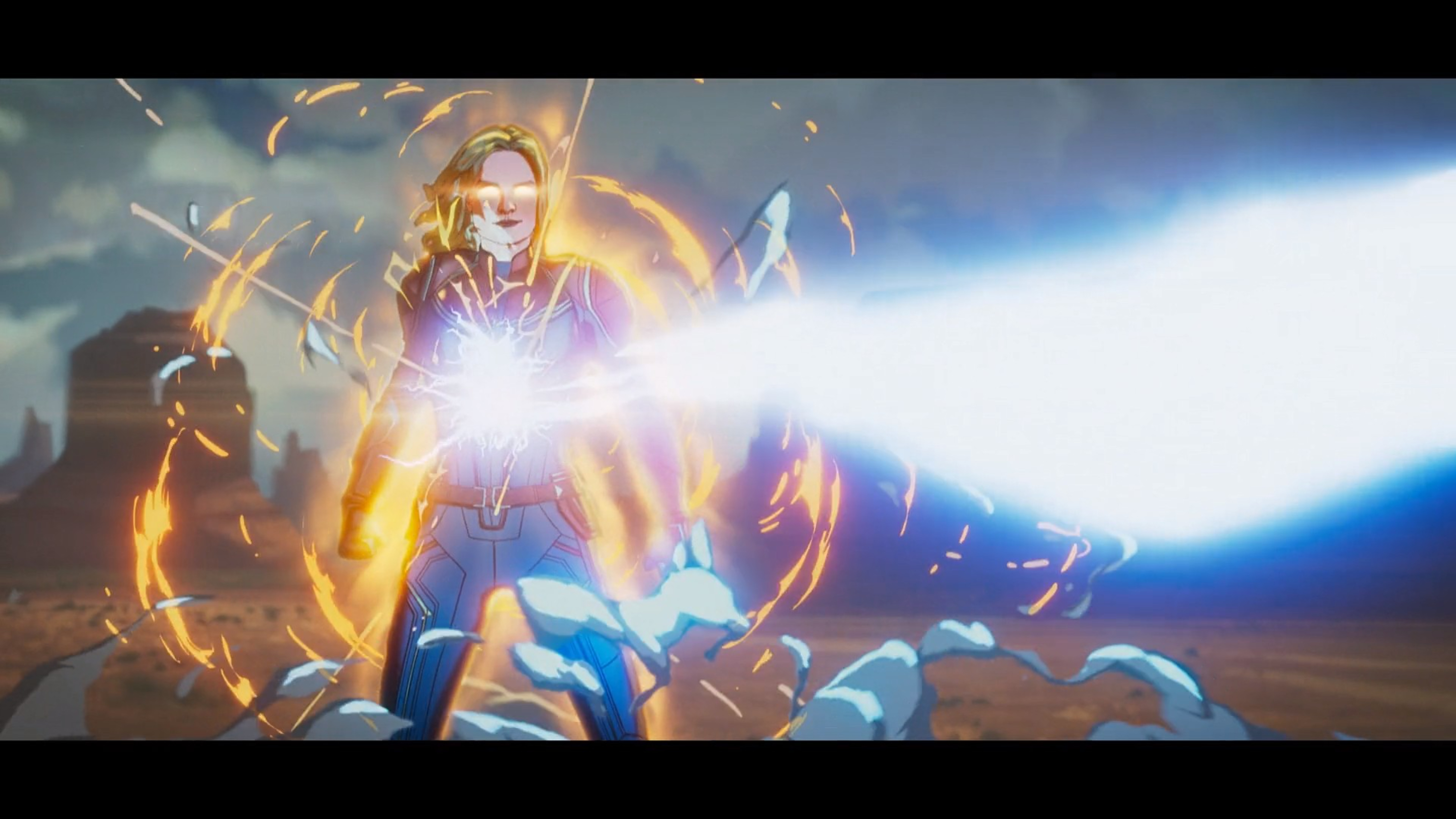 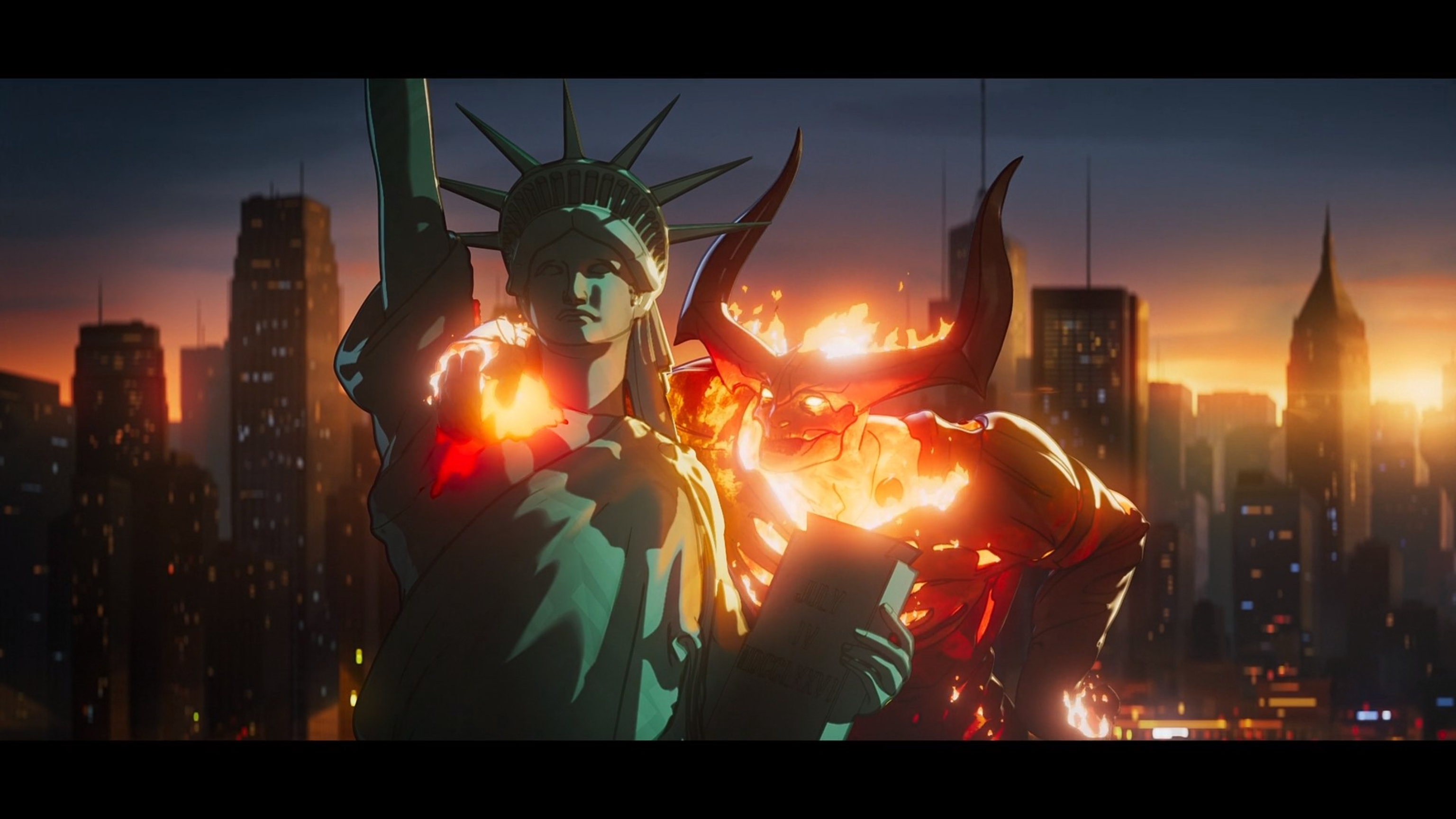 Remember Surtur from Thor Ragnarok, the one who actually unleashes said RAGNAROK?

Now he’s flirting with the Statue Of Liberty.

A Happy Ending… Not 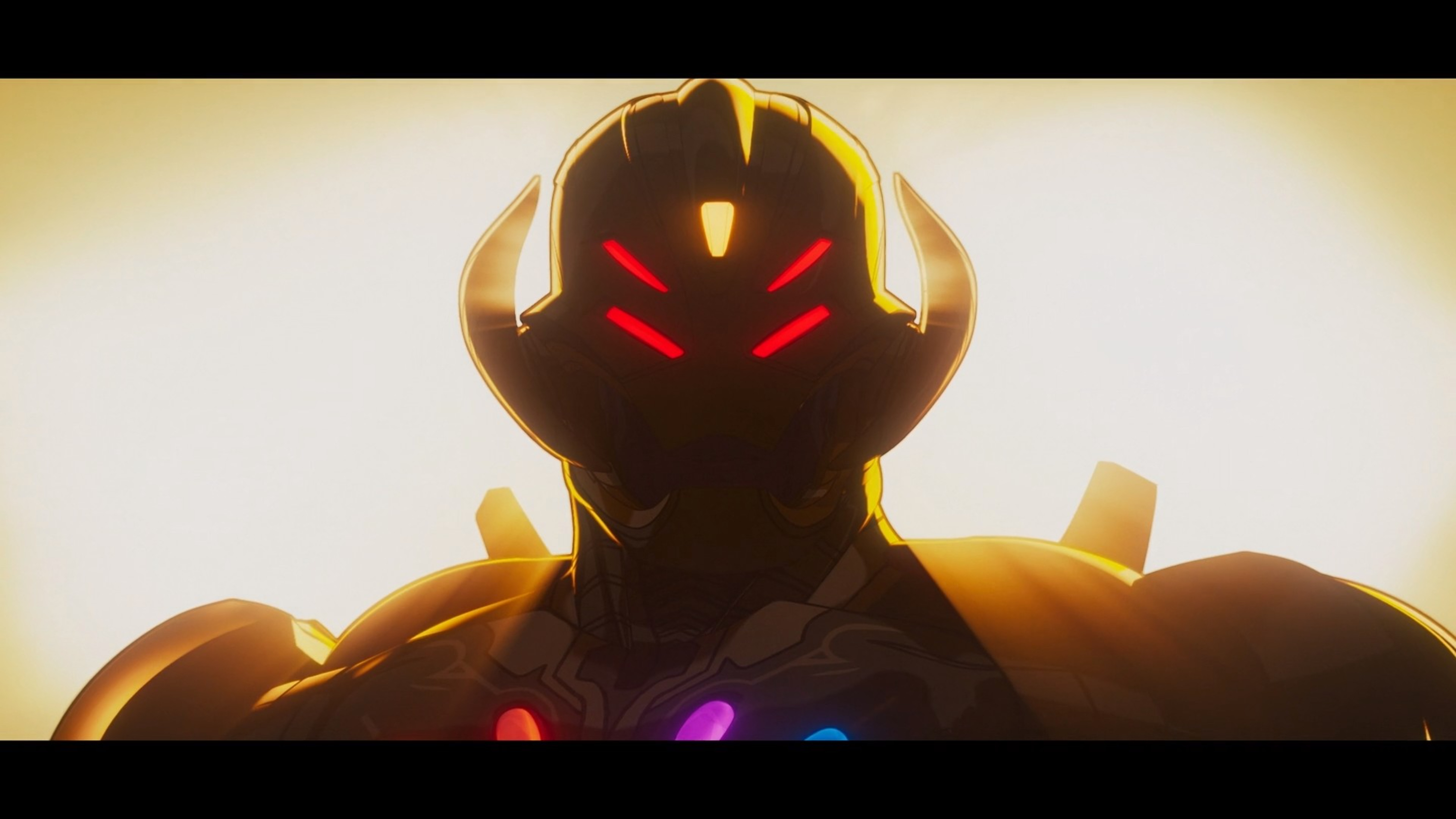 Most of the previous episodes have always ended on a dark note or at least on a hopeful albeit still sombre one. This episode almost surprisingly ended with a happy ending (Thor taking Jane out on a date) before the final twist arrived.

A portal opens with Ultron and his Ultron bots coming through.

We can see that this Ultron has all the Infinity Stones but one last twist reveals that inside Ultron is a Vision with red eyes.

Could this be a variant Vision who is evil and has collected all the Infinity Stones?

Maybe it’s a version of Ultron who has absorbed Vision and collected all the Infinity Stones? 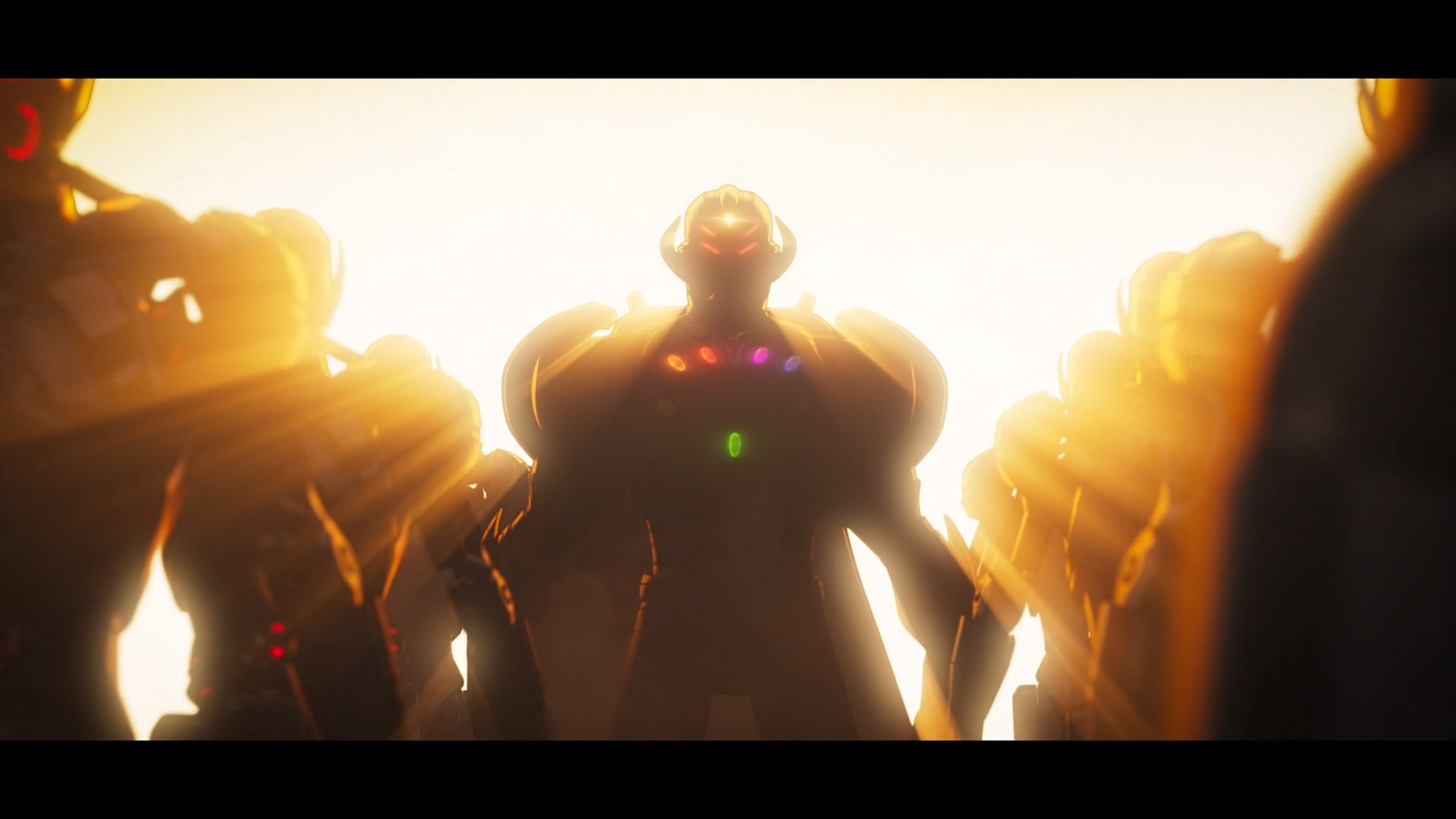 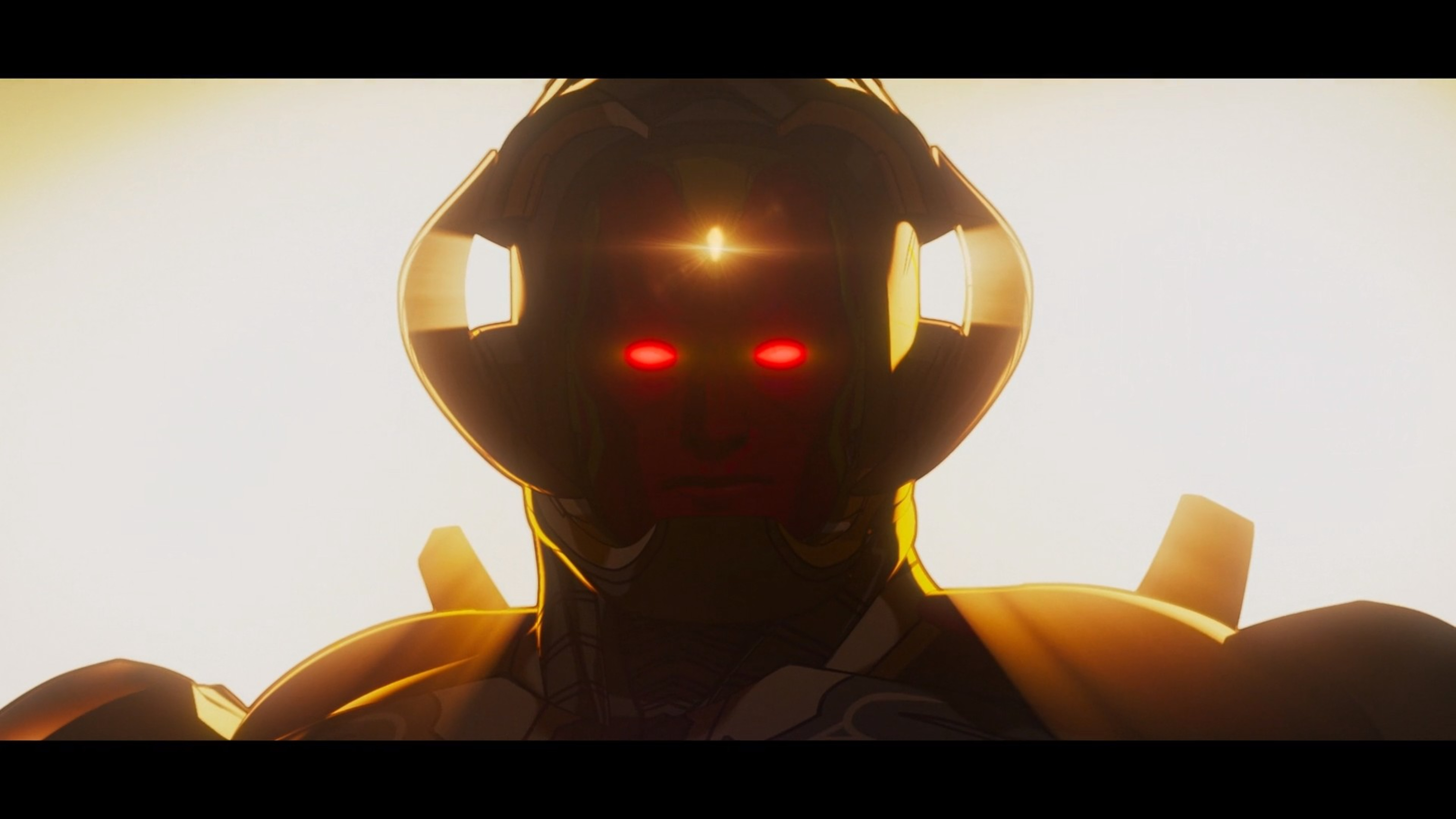 Still, it’s great to see that this design of Ultron is closer to the comics than the MCU version. 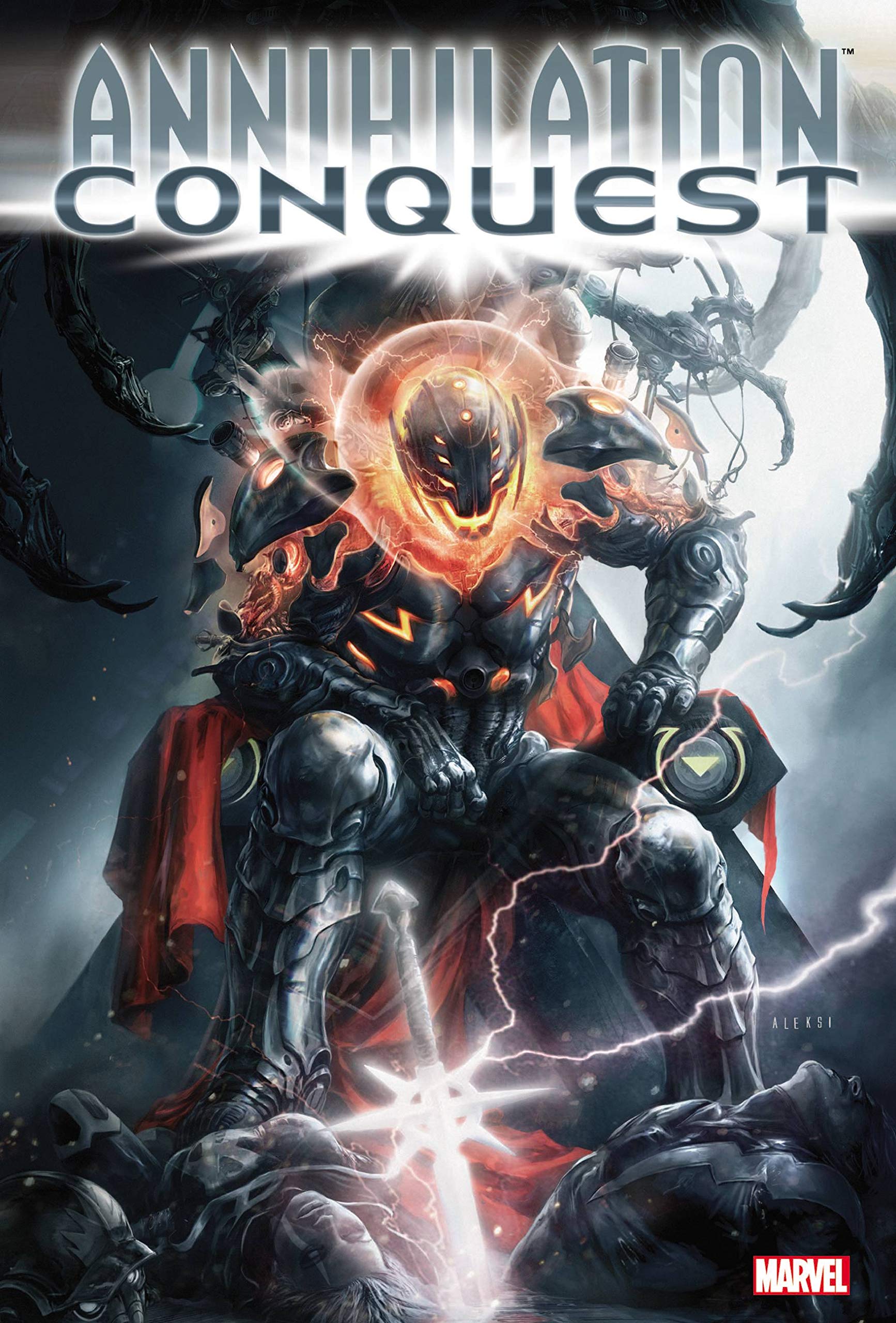 With this ending, perhaps we might finally see more serialized episodes that directly connect with each other in the last two episodes of Marvel’s What If…? Season 1. We already know that this episode’s version of Party Thor will somehow meet the evil Doctor Strange Supreme from earlier this season (see below).

Thatâ€™s all for this week, folks. Until next week, Excelsior, true believers!

Feature
Genshin Impact Cross Save Guide : How To Link Your PlayStation Save To PC & Vice Versa

Genshin Impact 2.0's update now features cross-saving for PlayStation consoles, meaning you can now play one account across every platform. Then again...

Final Fantasy ain't staying final, as Square Enix is still at it for the next few years. The company is allegedly going to announce a sixteenth mothe...

Good news for you Star Wars fans out there: EA has added 12 classic Star Wars games to its Origin Access subscription service. Here's what you're gett...