Let’s Talk About That Dune Game No One Brings Up

Article originally published in October 2020. Brought forward to 2021 since the film Dune is out now in theatres.

To celebrate the reveal of the latest film adaptation of Frank Herbert’s Dune directed by Denis Villeneuve and starring that one kid in Call Me By Your Name, as well as the film’s release, I’d like to bring up Dune’s video game adaptations.

The plot to Dune is as epic as they come: a young Paul Atreides and the family House he’s from are the latest in line to rule the planet Arrakis to mine the rare commodity named melange (dubbed “spice). Not only do they have to deal with the takeover attempts of House Harkonnen and Machiavellian plots from the Emperor, but our hero Paul will need to accept his destiny in leading Arrakis’ inhabitants, the Fremen, as their saviour. Oh, and he eventually gains superpowers and fights real good, so he’s kind of the first shonen hero of sorts.

And with that ever-expanding sci-fi plot, making video games out of it is a no-brainer. After Virgin acquired the license from the 1984 Dune film’s production house (via the latter’s desperate attempt to sell off its licenses to stave off bankruptcy), they set about making Dune games.Â The 1992 Dune II: Battle for Arrakis title from Virgin and Westwood laid the foundations of real-time strategy games; without it, you wouldn’t be enjoying your Warcrafts, your Command & Conquers, and your Supreme Commanders. When the subject of Dune and video games crop up, it’s either Dune II or Dune 2000. 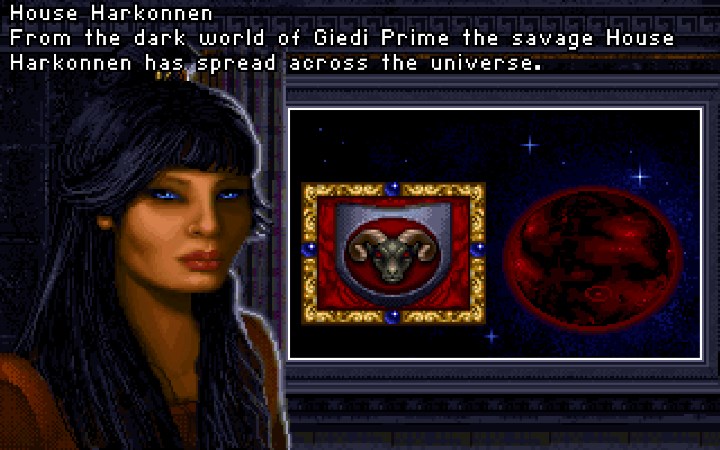 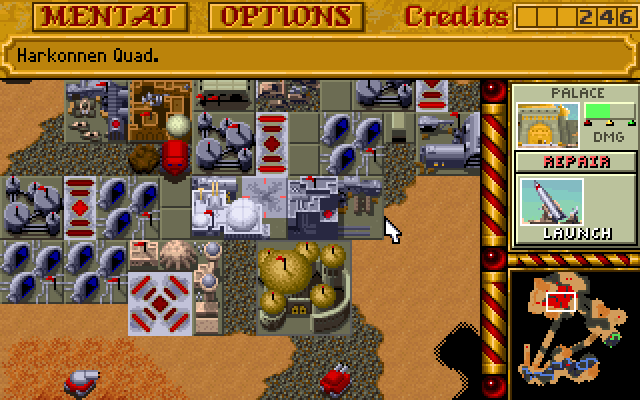 Or Emperor: Battle of Dune and its goofy live-action cutscenes which is what happens when a David Lynch production was on a tight budget. 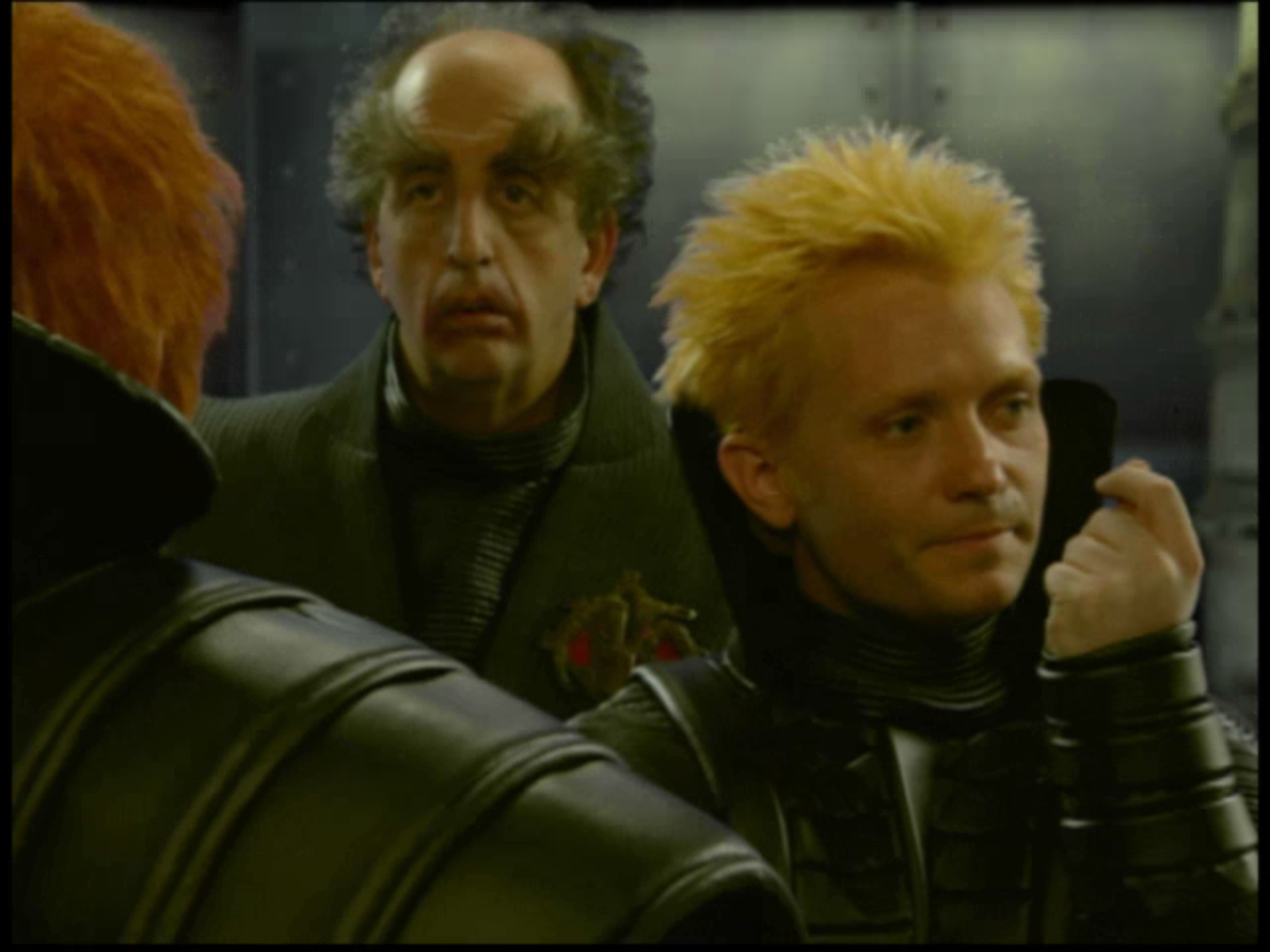 Rarely, however, does anyone ever bring up the 1992 Dune adventure game made by French developer Cryo that came out the same year as Dune II. The answer was simple: it was clearly overshadowed by Westwood’s efforts. The history behind it was such: Cryo was working on the game 1989, but was shelved in 1990 because its publisher Virgin Interactive decided halfway to cancel the game because they believed its mix of adventure and strategy wouldn’t succeed. They handed the license to Westwood; you already know how that went.

But what Virgin didn’t know then was that Cryo was still developing the game in secret. When Sega bought over Virgin’s European division, around that time the American division of Virgin found out about Cryo. Talks were made between Cryo’s devs and Virgin founder Martin Alper, and somehow or other they decided to just finish up Cryo’s Dune and ship it in 1992.

Many would assume that Dune II was remembered more fondly than Cryo’s Dune because it was the better game. But was Cryo’s Dune terrible? Far from it; it was a decent adventure-slash-strategy hybrid sci-fi title that is quite unique at the time. One reason why some niche circles adore it was because it was faithful to the first book from Frank Herbert. Cryo obviously took the aesthetics from the film from Kyle Mclachlan’s face to Sting’s portrait, but generally, every portrait and graphic here is brand-new and inspired by the novel. 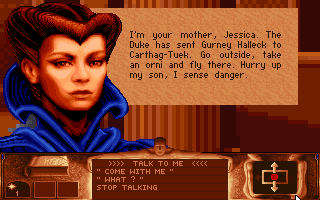 The game starts off as an adventure title, with Paul Atreides getting familiar with the Atreides household and fly between locations in the ornithopter while earning the trust of the Fremen in their cave-like homes called sietches. Later on, you will be leading them to either recruit more Fremen, farm for more Spice, train to become soldiers, and become ecologists to make the planet a tad more inhabitable and inaccessible to invading Harkonnen troops (sietches with growth = not good for spice-harvesting).

That’s where the strategy bits come in; as Paul Atreides and as the prophesized leader “Mua’dib”, you need to plan on how to farm enough spice to pay off the Emperor because of some intergalactic tariff, but also save some for yourself to build better equipment to grow these settlements. Pretty soon, the Emperor demands more, and since spice is limited, you’ll need to also find new Fremen and expand onto new settlements. 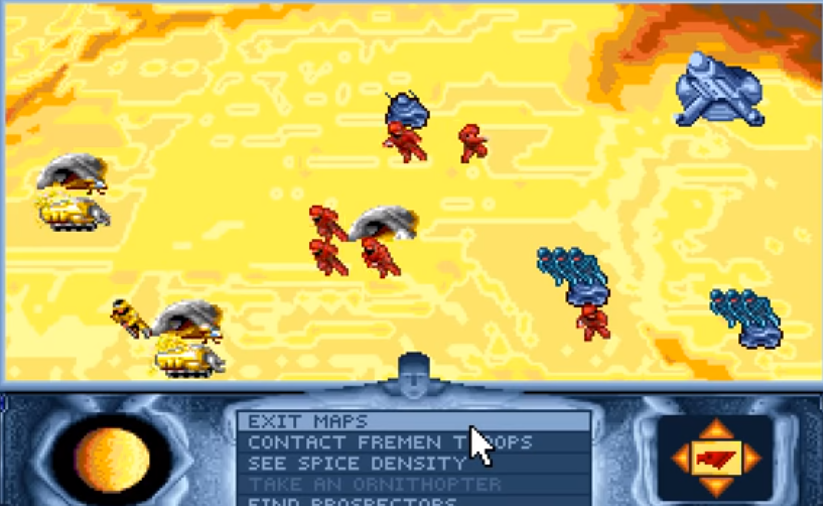 Luckily, you can travel between them using either the ornithopter or riding the sandworm. yes, Paul will eventually gain the ability to ride these awesome but scary creatures thanks to his psychic powers. Said powers also get strengthen so he can communicate with all his Fremen bros and workers telepathically. You’ll also need to deal with the pesky Harkonnen army, so you’ll have to train the Fremen in combat, as well as win over the rest of the Fremen by drinking the fatal Water of Life (oxymoron, I know). Oh, and also get better gear for them to fight with the limited spice you acquire. If you take things too fast and rush headlong into danger, you’ll see the bottom screen a lot.

While this all sounds fun and deep, it can be monotonous in practice. While the adventure portions are lovely and feature some good lore and characterization, the combat strategy bits can be boiled down to “send all your best Fremen troops with the best tech to attack a Harkonnen fortress, and hope for the best”. Luck does play a factor here, to the point where even the best troops lose to a measly-defended fortress. Conversely, a large Harkonnen battalion can lose to an adequately defended sietch, so it’s basically flipping a coin and seeing the outcome, then scum-save-and-load at this point.

All this is played in real-time; there’s no button where you skip turns and go straight to the results. Which means you have to also travel around while combat is going on, and you also need to menially go back to the Atreides palace to pay the Emperor. The 90s weren’t kind to adventure games with this sort of back-and-forth nonsense.

Sure, its gameplay is too luck-dependant, but its production values, story bits, and aesthetics were great. Adventure games do live and die by how they present themselves and how they tell their tale, and Cryo’s Dune is fantastic-looking as a result. In 1992 when sprites were the norm, the lush portraits and cool sci-fi designs were a treat to experience. And while it’s weird that the character exposition is a tad clunky (like Duke Leto introducing himself as your father as if it’s Paul’s first time meeting him), everything else is just oozing with charm and style that you just want to put up with the game’s sim aspect to see the adventure unfold.

It also helped that the game’s soundtrack composer Stephane Picq created an awesome and atmospheric OST for this title, and makes a strong case for someone to release vinyls and digital downloads for AdLib synthesized scores from 90s PC games.

The Spice Must Flow

I never did touch Dune II in its heyday, but I had some good memories with Cryo’s Dune because it felt new and fresh. It wasn’t a 2D platformer where Paul Atreides had to jump through literal hoops and use sandworms as platforms to get to Feyd-Rautha who has a devious attack pattern. It was a true adventure game where you follow the beats and motions of the first book, but also features some aesthetics from the film. It was immersive and engrossing to the point that after playing this, I ended up reading the books later on.

It may not be as revolutionary and as in-depth as Dune II at the time, but it was different from the games I’m used to playing in the 90s. And it made me pick up a book once in a while to see how the vestiges of sci-fi came to be. That’s the power of games sometimes: it can open up your mind to other forms and mediums. Cryo’s Dune is a sterling example of this, even if it botched the gameplay by a tad.

If you wish to play it, you may need to scour places like Ebay because there aren’t any digital game stores selling this. Alternatively, you can check out a homage Flash game title called Behind The Dune. It’s made by a game developer named David Goujard who released it in 2016. It’s similar to Cryo’s Dune as it combines the adventure and strategy elements to form a hybrid title.

Except for…well…I’ll let these screenshots speak for themselves. 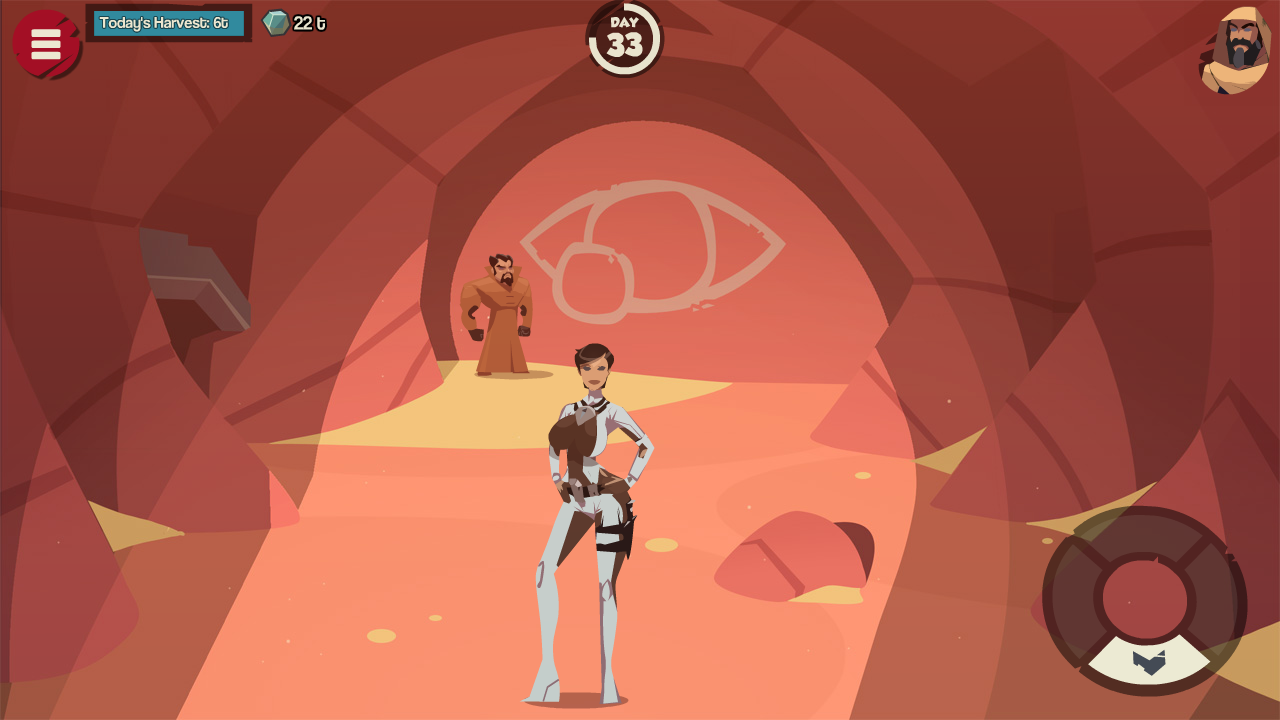 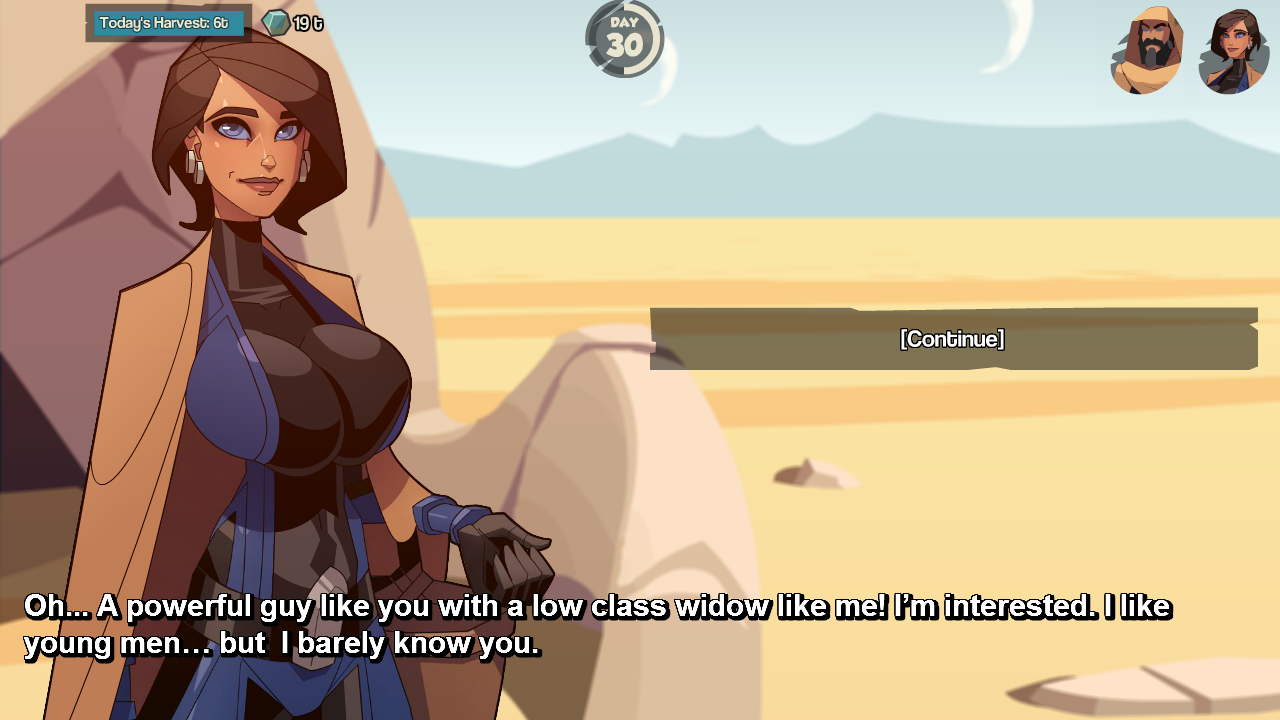 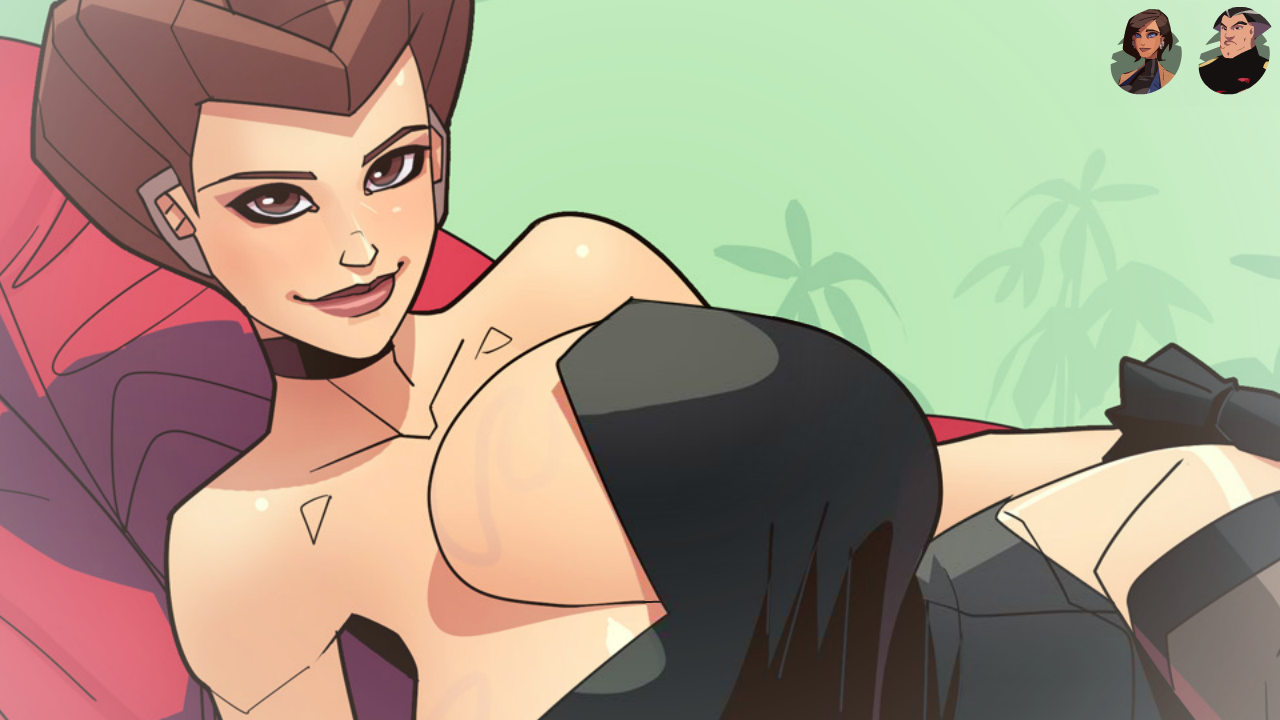 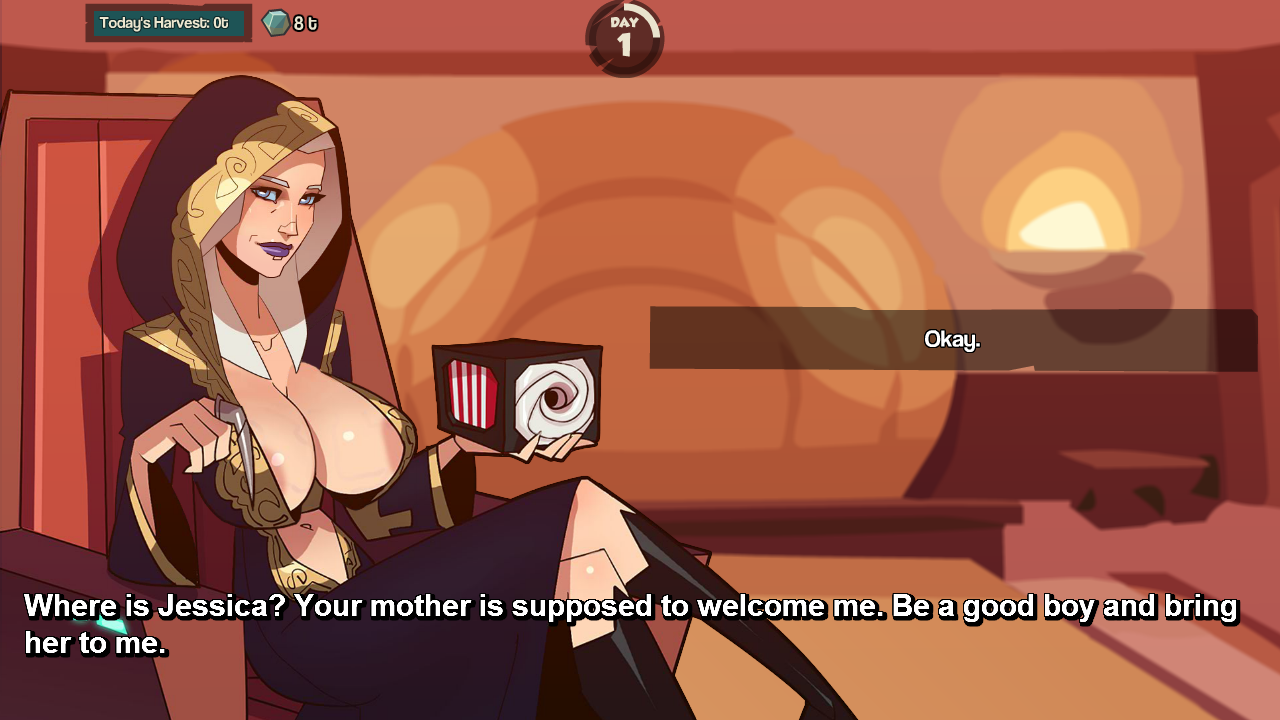 I forgot to mention that this is a parody Flash game for adults. More on this at another time.

Feature
Everything You Need to Know About Insomniac's Spider-Man

We were at the exclusive Southeast Asian preview event for Insomniac's PlayStation 4 exclusive, Marvel's Spider-Man recently and here are all the thin...

At the time of writing and as of 9pm GMT+8 today on 13 August 2020, A Total War Saga: Troy is now available exclusively for PC on the Epic Games Store...

Back in 2019, former Uncharted franchise writer Amy Hennig became the president of Skydance New Media, a division of Skydance Media that would focus o...