The live-action adaptation of the revered sci-fi space bounty hunter show Cowboy Bebop is finally here on Netflix. The show stars a trio of mercenaries trying to get by -Spike Spiegel, Jet Black, and Faye Valentine- as trouble catches up with them.

Courtesy of Netflix Malaysia, we were lucky enough to interview Alex Hassell (Vicious) and Elena Satine (Julia) about the anime, the relationship between their characters, and more. This interview has been edited for clarity.

We were also lucky enough to participate in a roundtable interview with John Cho (who plays Spike Spiegel), Daniella Pineda (who plays Faye Valentine), and Mustafa Shakir (who plays Jet Black), asking them some fun & thought-provoking questions about what itâ€™s like playing characters from an anime masterpiece. Check out that interview here.

In addition, we participated in a roundtable interview with Cowboy BebopÂ showrunner Andre Nemec, and ask him about what it was like to translate the anime into live-action. Check out that interview here. 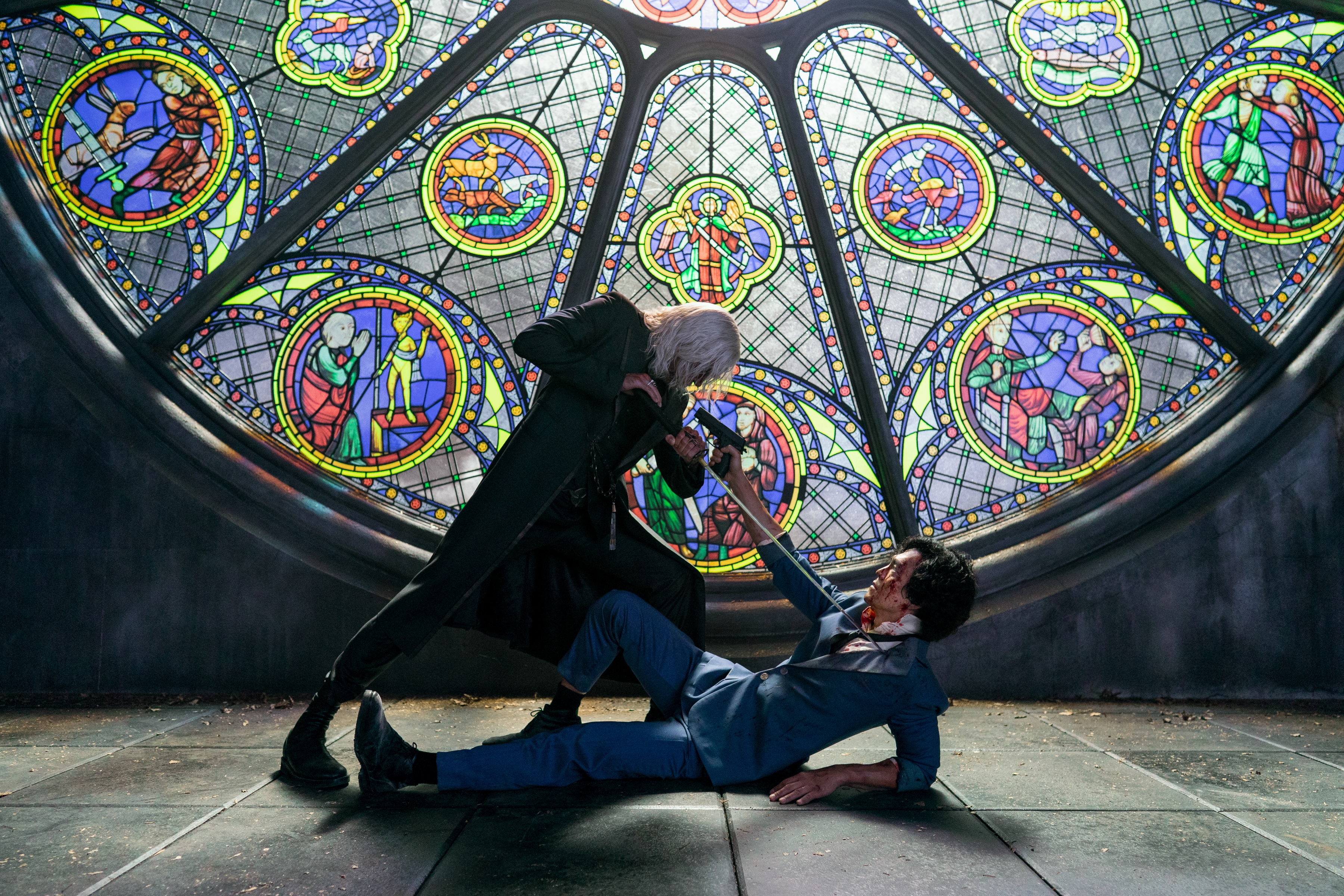 Before you read this interview, be warned that spoilers for the ending of Cowboy Bebop Season 1 lie ahead, so read at your own risk:

Did you watch the anime in preparation for your role? What did you think of it?

Elena Satine: Yes, I was a big fan of the anime for many years, probably at least over a decade, enough to have seen it multiple times. It’s something I tend to revisit every year or so and I like to show it to people. I take weird ownership over the anime and I’ll be like, “I’ve got to show you something.” (laughs)

Elena Satine: Now it’s earned but yeah, I was a huge fan.

Alex Hassell: I hadn’t seen it until I auditioned for the show and then took a deep dive into the anime and the film and now I’m a huge fan of it. Yeah, such an amazing piece of work. A seminal piece of work that obviously had this incredible global phenomenon built out of it that we’re very lucky to be a part of and riding the coattails of.

Alex Hassell: For me, it was learning to fight. Learning to fight with the katana. That was not something I knew how to do. I fight with swords, fought with swords in other jobs before but not a samurai sword and not with that level of precision. It’s such an important part of the character (Vicious) and obviously, he has such ownership and expertise. I wanted to get as close to that as possible and do as much of the fight scenes as I could myself. That just took a lot of time and effort and you know, starting off holding it, I didn’t know what to do with my other arm and that kind of stuff. Just kind of sticking at it and I’m proud of those fight scenes and really pleased that I got to learn that skill.

Elena Satine: With Julia, it was really just humanising her and making her a real person when the jumping-off point is sort of, you know, I remember the breakdown said that she’s like the ethereal dream girl. It’s really hard to have any kind of compassion for a character that’s described in like such a, you know, she’s beautiful and everybody wants her. And it’s like, well, what is underneath, what makes her so intriguing to this character who was willing to risk everything for her. I think it was just finding those nuances and what makes her really special. 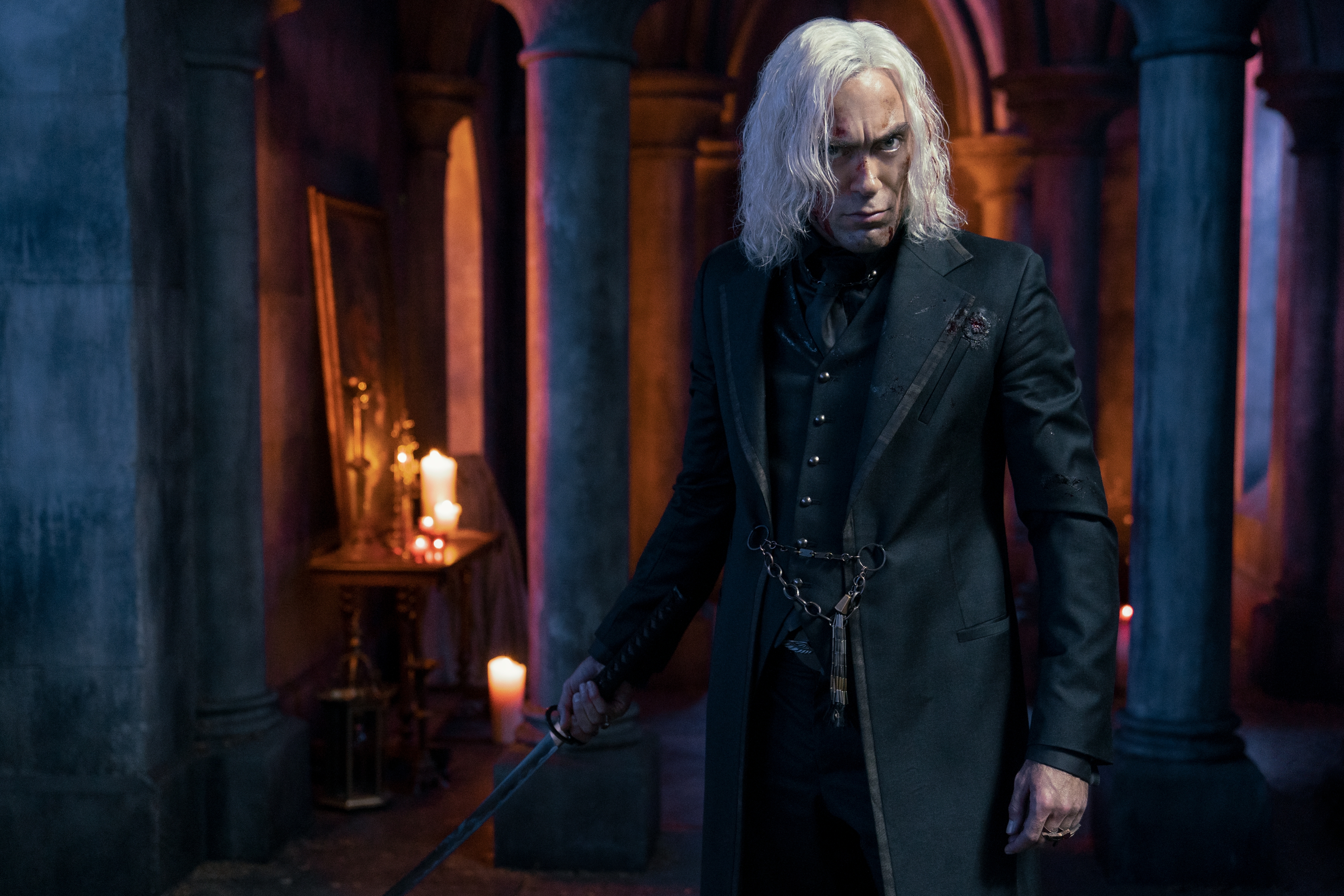 Your characters, Vicious and Julia, rarely appeared in the anime. How did you develop and make these characters your own?

Elena Satine: In a way, that was actually helpful. At least for me, there was sort of a sketch of who Julia is but there was so much room to build her out. I would assume that takes a little bit of the pressure off when for instance, she only says like one line in the anime, so it’s not like she had a specific way of speaking or anything that the fans were going to look to really, really closely and go, “Oh, that’s not the way that Julia would do it”, you know. There’s a lot of room to craft who she is, I think, in a way, because she was this idea rather than a person in the anime, it really helped create the person.

Alex Hassell: Yeah, I’d say that’s really similar with Vicious in that he’s kind of an archetype in the anime. He’s kind of a spectre of death. In terms of expanding that character and fleshing out, a lot of that work, obviously, was really done by the writers creating this whole different layer of what he does outside of being this terrible person and his home life and stuff like that, the domestic scenes and their marriage. In terms of the job of trying to explore and kind of excavate the writing that we were given was about trying to find a counterpoint to that violence. I think what we struck upon was the idea that the Vicious of the anime is the Vicious our version would like to appear to other people but underneath, he has a lot of vulnerability and pain and damage. I think it makes him, our version, maybe slightly more out of control and more brutal and thuggish. Like a very savage bull in a china shop.

How would you define the relationship between your characters?

Alex Hassell: Pretty complex and pretty dark and well, abusive. Vicious, he’s an abuser, he’s a domestic abuser and a very violent manipulative horrible person that you wouldn’t want to be married to.

Elena Satine: I would describe it as very unhealthy because obviously, it is an abusive situation but there’s also a very intense co-dependency there, I feel like, where he (Vicious) can be someone who’s kind to her (Julia), but at the same time, he seeks her counsel. There’s a lot of layers to this relationship and I think underneath all of that, when handling a storyline about an abusive relationship, we really have to look at the whole picture and a lot of the time, women don’t leave abusive relationships because they make excuses for their partner. They blame it on themselves or they think, “Oh, you know, that was just a one-time thing.”, or “He’s not going to that again.”. I think because we get to see their connection in the flashback episode at one point being very, very real, you really begin to understand why she stays in this. Yes, there’s the fear for her life if she leaves, but I think it’s deeper than that.

Alex Hassell: It’s very telling, isn’t it, in that Vicious stays in the relationship when he knows that Julia and Spike have had this relationship. It’s very telling of the real deep need and insecurity and low self-esteem. I guess they both feel at that point, that there’s no one else who would want them or they wouldn’t be able to get anyone to be happier with. 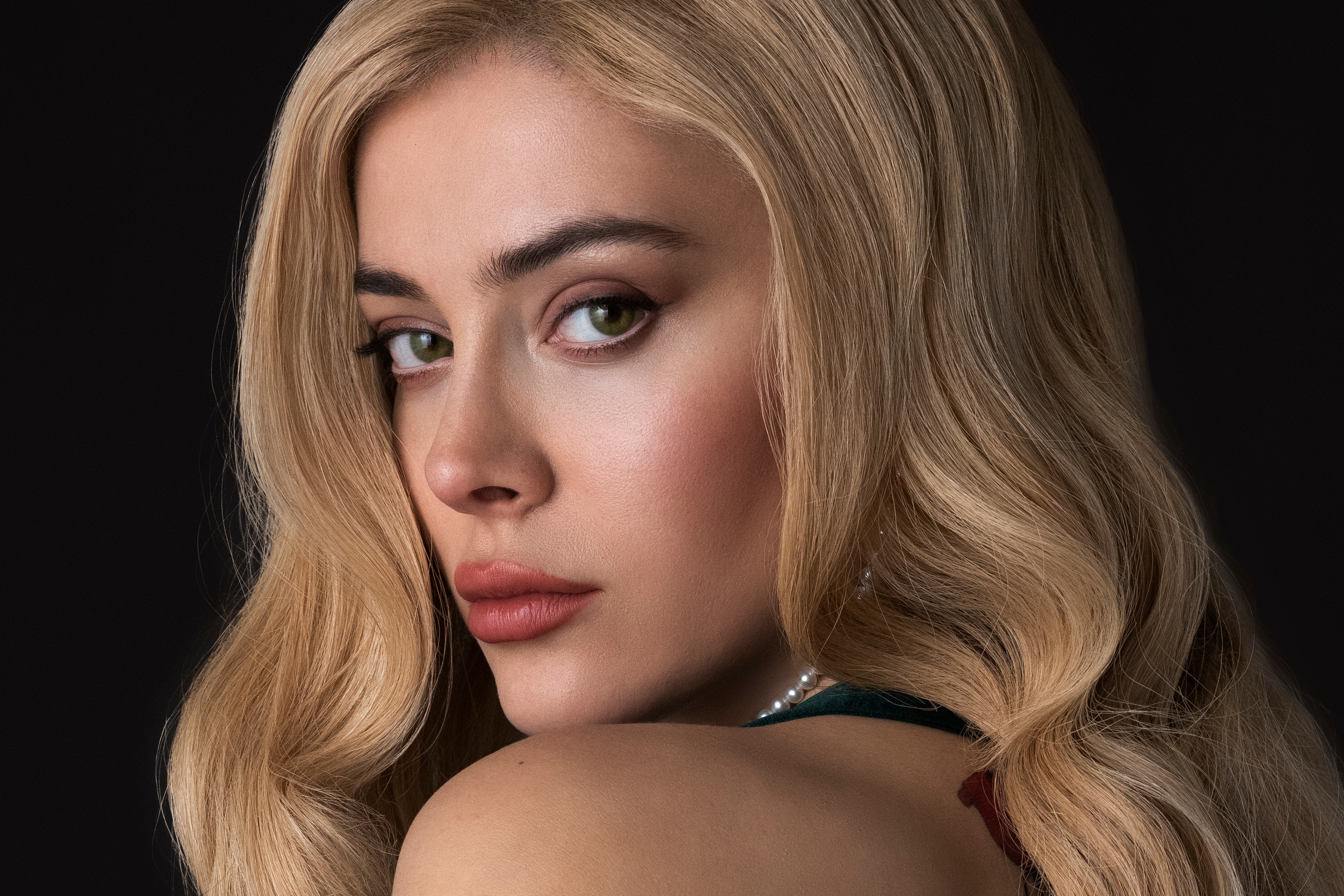 The ending of the live-action series is very different from the anime. Can you tell us what’s next for your characters?

Elena Satine: We would love to tell you but we have no idea.

Alex Hassell: If you can find out for us, we’d be really, really happy. Yeah, I don’t know. I mean, we can speculate and we do, but we don’t know.

Elena Satine: I hope it’s a dark turn for Julia. I’d love to see Julia be the villain. That would be really fun. That’s just me being selfish, I think it’s really fun to play a villain. Right, Alex?

Alex Hassell: Yeah (laughs). It is quite fun to be the villain. I guess I hope that Vicious gets out of that basement. Otherwise, if we do get more seasons, it would be quite a lonely experience.

Do you have any favourite moments or episodes from the first season?

Elena Satine: My favourite episode is episode 9, the flashback episode. I love it.

Alex Hassell: My favourite episode to be part of is probably episode 9 but I have really, really liked episode 8. I think it’s really, really brilliant starting in Cherious Medical and then having the Le Fou character. Also, I really love the way that the elders’ temple fight had been shot and yeah, that’s a favourite for me. I just think that Earth Land is such an amazing, amazing set, and those whole sequences. 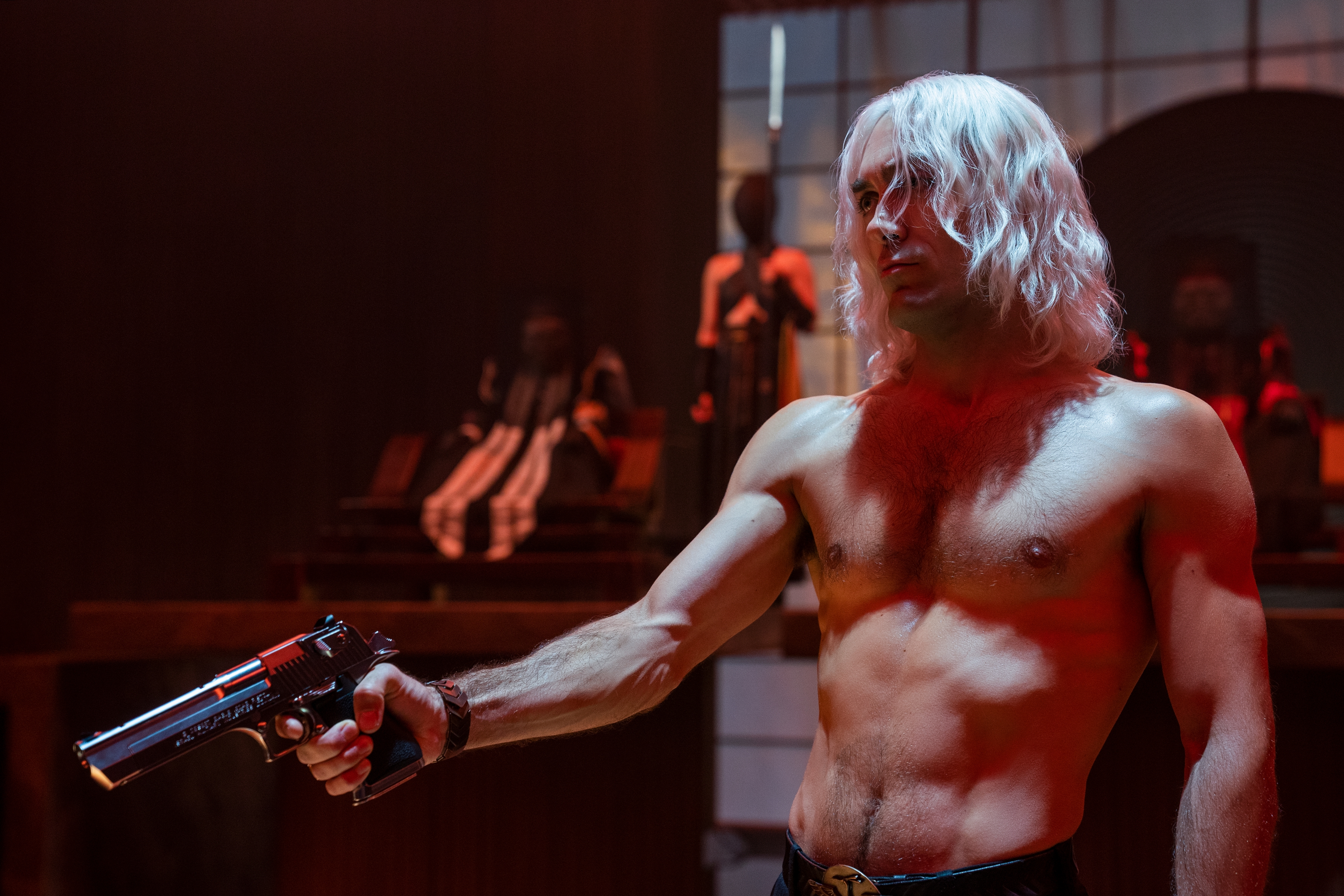 What was it like to work with the rest of the cast like John Cho and the others?

Elena Satine: I loved working with John. He’s so effortless in his approach. It’s really, like, awe-inspiring to be in a scene with him and he does so little yet it’s so beautiful, his performance is so beautiful and effortless. As for Faye and Jet, I didn’t have any scenes at all with Mustafa or Danielle, so it would be really nice if there is a Season 2 for our paths to cross. I would really love to work with them. I think they’re both such terrific actors and they’re so perfect for these parts. It would be really nice to see what that dynamic would be like if we were to share a scene together.

Alex Hassell: You know, I wonder if there could be some sort of road trip that Ein and Vicious get to go on together and just like drive off into the sunset.

Elena Satine: Well, if you get out of the basement, we’ll talk about it.

Alex Hassell: Maybe Ein gnaws his arms off and he could get out that way. (laughs) He wouldn’t be able to drive the car. I’m going to some weird area here.

Good news, PlayStation fans. The latest web-headed wizard game from Insomniac has sold a ton on both PS4 and PS5 consoles. Sony announced during it...

CBS has unveiled a brand new look at Admiral Jean-Luc Picard in a new poster for the upcoming Star Trek Picard series. The motion poster ends with the...