We Need More Fun RPGs Like The Ruined King: A League of Legends Story

November is a heckuva time to be a League of Legends fan. With the Netflix Arcane series out and Riot Games’ surprise spin-off launches, it looks like the company is going above and beyond content-wise. And that’s not even counting the esports stuff and upcoming fighting game that will hopefully be revealed in full next year.

For now, role-playing game fans can be content with Ruined King: A League of Legends Story. Made by Riot Games’ spin-off publisher Riot Forge and developer Airship Syndicate, which features Joe Madureira’s legendary art style and vision, Ruined King is basically a JRPG with a League of Legends plot worked in. Said story involves the vengeful pirate queen Miss Fortune who has to team up with Kraken priestess Illaio and a few other oddballs to prevent a mist-related life-wrecking magical catastrophe from destroying their home of Bilgewater. The folks who will join you include beloved samurai Yasuo, fox magic person Ahri, bald tough guy Braum, and spooky killer Pyke.

Ruined King’s deal is that it’s a story-driven RPG with a turn-based combat system to resolve enemy obstacles, puzzles in its overworld dungeons that need a bit of know-how to solve, and a bunch of sidequests to distract you and score you better loot. All this is made by the same folks who did the acclaimed RPG Battle Chasers: Nightwar and the action game Darksiders Genesis, so the seal of quality in this new title is apparent.

I love it. And I’m not even that fond of League of Legends, which goes to show how strong the game’s design and core mechanics are. 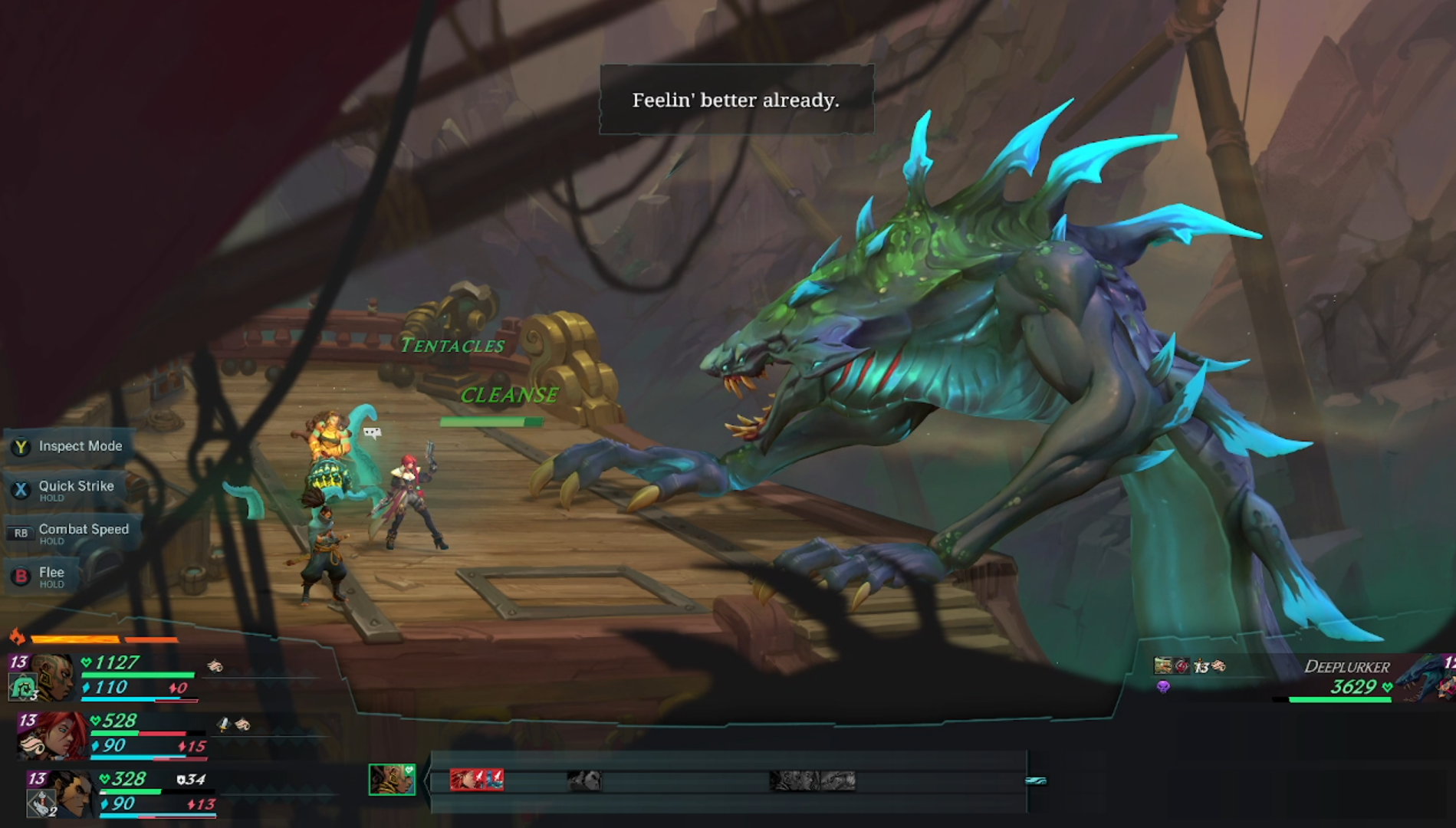 What makes this JRPG-from-Westerners’ turn-based combat system fun is the addition of the initiative bar system; an LoL game NEEDS to work in its MOBA lane system somehow to keep in theme, right? Your turn orders are determined by this three-lane bar on the bottom center of the screen; if you’re on the left-most part, you’ll start first. You have Instant moves that you can use straight away (normal attack, guard, taunt, additional attacks), and you have Lane moves that take a few turns to activate, but they either deal a ton of damage, add debuffs/buffs, or heal your party. Each Lane move can either be one of the three types on the initiative bar: Speed, Balance, and Power. Speed Lane moves activate quicker but hit for less, while Power activates slower but hit harder. Balance is the default choice if you’re not sure which one to go for.

Here’s where things get interesting: Hazard zones will appear on the initiative bar in most fights: these can either be beneficial or debuffs/damage-over-time effects. Whichever type of Lane move you pick will determine the position your character will be on the bar. If there’s a healing zone, you’d want to be on it to get the benefits. If there’s a zone that shoots lightning at whoever’s in it on the Speed lane, you’d want to avoid that lane. Furthermore, some moves can push or pull enemies back or towards the initiative bar. And some enemies will have powerful buffs that negate damage (or make them hit thrice as hard) unless you hit them with a specific Lane move, be it Speed or Power. That golem with the huge damage-negating armour? You have to use Power Lane attacks to destroy its armour bit by bit to weaken its defenses.

Therein lies the strategy in combat; while you’re hitting foes with attacks, you also want to make sure you’re on the right side of the initiative bar and save your Lane moves to be getting all the buffs in Wildcard Zones. At the same time, you have to deal with powerful enemies who can only be weakened with the right Lane attack, which means planning your delayed turns or just play defense, depending on the situation. Every major battle in the game will make you think hard and start figuring out your lane moves, especially in the higher difficulty settings.

This is all made spectacular with the game’s simple-yet-colourful art style (thanks to Joe Mad’s iconic art direction) and impactful sound design. Every hit that your samurai guy Yasuo lands is clean-cut and smooth, while Ahri’s spellcasting feels whimsical yet painful on foes. You’ll wince a bit when bad guys start putting the hurt on you, especially if you forget to put on your defenses on your turn. 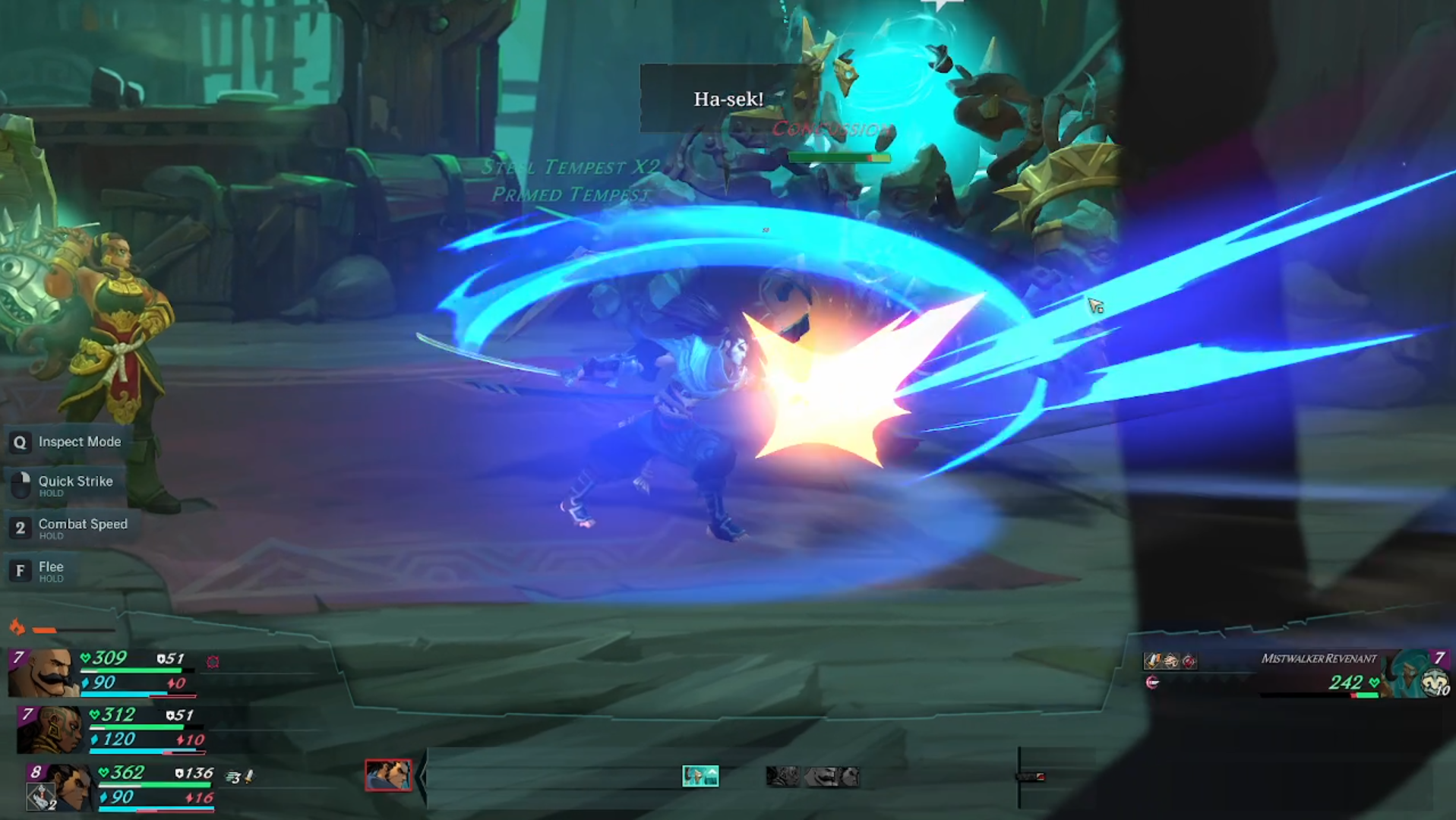 Ruined King isn’t without its problems though. For one, the game’s dialogue is pretty standard, with a few corny and exposition-filled lines that feel like they’re out of a comic book than an actual serious fantasy novel. Joke’s on me, given how splashy & sketch-like it looks, but don’t expect high-level Witcher-style profoundness in its narrative; just some good old-fashioned fantasy adventure tropes popping in.

The game also needs a bit more playtesting and thought in some areas. Some text is spelt wrong, and some unintentional placeholders pop up now and again during combat. I’ve also had my game crash via the game’s infinite loading sequence; I had to restart the game after a few minutes of seeing the loading screen not budge.

And the map system; oh lord the map. Sometimes I have no idea where I’m going, or where specific objectives are. Both the main and side quest objective markers are exactly the same, and some quests with noted locations do not update within that chain. This means that the map and quest log will still show you the map location of the first part of the quest, but not the second which takes place at an entirely different location. You might even trigger an unintended story sequence that can bar you from progress for a short while, or even trigger high-level encounters if you’re not careful. It’s a pain going back and forth in the game, especially since its fast travel options are few and far between. Simply put, the long-term exploration for sidequests and faffing about is not so hot. 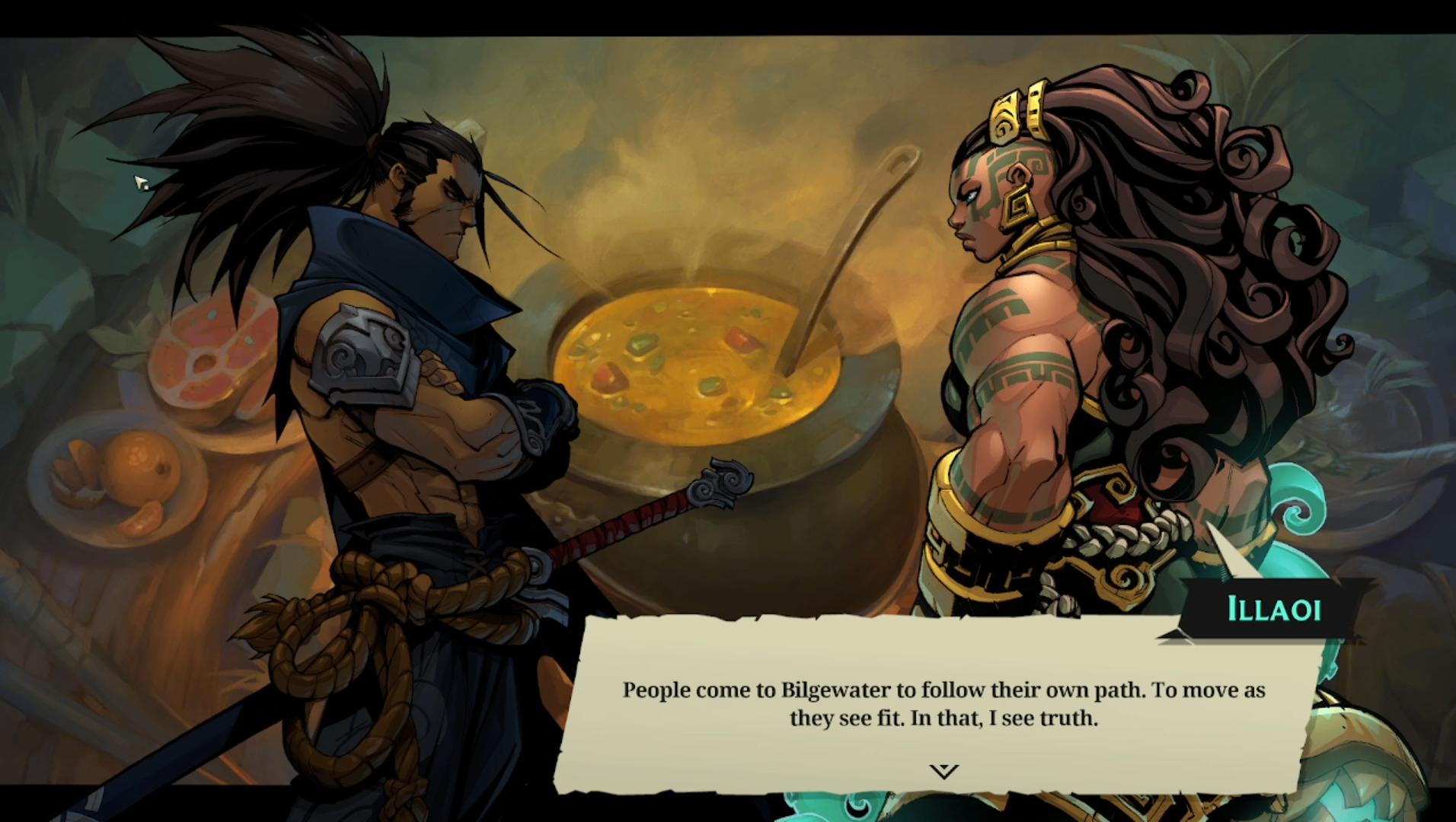 Still, all these isn’t enough to detract from the meaty 30+ hour experience, most of it fun and cathartic if only because I like to create power teams with these LoL characters to wreak havoc on the battlefield and get sweet loot out of it. If there’s a Western-based game developer who can make JRPG-style titles and nail them, it’s definitely Airship Syndicate.

That’s what Ruined King is aiming for: to be a lovely turn-based RPG experience that oozes with League of Legends flavour from its lane-based mechanics to its colourful lore that’s only presented previously on a surface level in the MOBAs. And it comes with the Joe Mad signature aesthetic to boot, which is always a boon for those who want easy-on-the-eyes titles that do not rack up triple-A prices.

True, some of the exposition story bits could use a lot less talking heads, but this isn’t a high-budget game (despite the oodles of wealth Riot Games has). All I’m saying is that this surprise LoL side game release is a fun and affordable RPG jaunt, even if you’re not a huge fan of the MOBA. If anything, this title proves that Airship Syndicate can make a worthy JRPG that can run with the big boys of the Square Enix and Bandai Namco variety.

Diablo Immortal is out now for all regions, and the action RPG is seeing a lot of buzz both good and bad. Part of this is because of its Legendary ...

Platform(s): PC Genre: Turn-Based Tactical Strategy, RPG The turn-based tactical strategy genre has been getting in its own renaissance of sorts i...

News
Cyberpunk 2077 Is Popular On PS4 Despite Sony's Warning

Cyberpunk 2077, a sci-fi RPG that has been getting fixed since its release last December, is topping the PlayStation Store charts this June. This i...