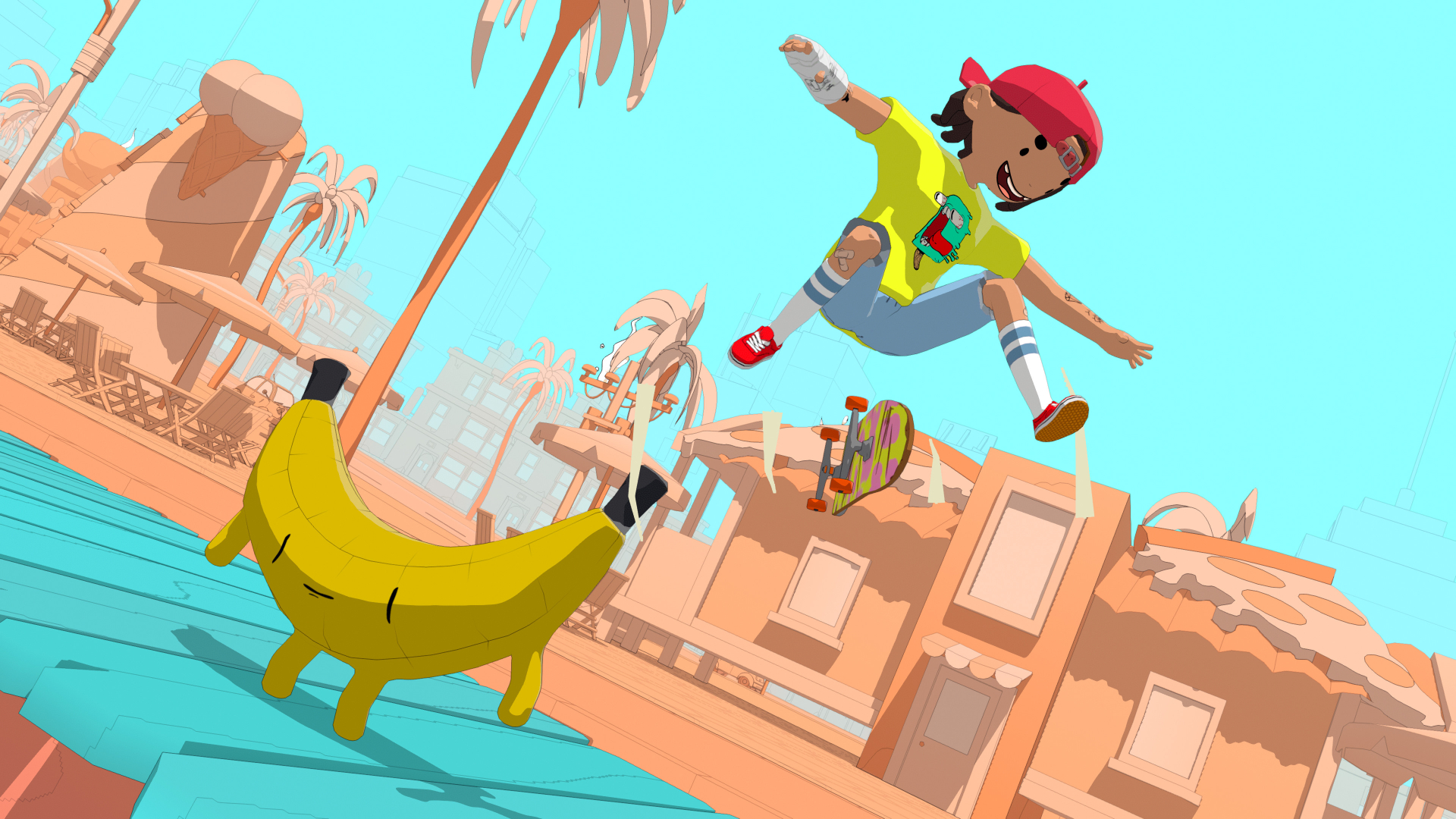 OlliOlli World is set in what could be a French game designer’s take on Adventure Time if it were taken over by Hot Topic and a Tony Hawk-involved joint. Made by Roll7 who are known for past OlliOlli games on the PS Vita (remember that treasured gem?), you play a skateboarder-in-training who joins a group of skating pros and content creators -Mike, Suze, Dad, and current Skate Wizard Chiffon. Their goal is to meet the Skater Gods and reach Gnarvana by being the best skateboarders on the realm of Radlandia.

What follows is a pretty trippy odyssey where you’ll get to chill and relax to the game’s eclectic soundtrack with various lo-fi and/or active beats, followed by some pretty awesome skateboarding 2D levels that beg you to replay them over and over.

You do this by conquering every single stage on the map (30 levels, give or take), separated into 5 biomes ranging from a beach area to even an industrial park where normal folks can just die from falls and chemicals. You’ll learn the tricks of the trade like nosedives, spins, grinds, and other skateboarding terminologies I lost track of, which you can look up in the game’s friendly-as-heck compendium.

You don’t need to remember all their names, just their functions. Certain tricks let you go down a flight of stairs without wiping out, while other tricks can break crystal obstacles in your way. Some stages can’t be traversed unless you know how to grind and land onto the aforementioned flight of stairs, and then jump off again for the oncoming wallride on the signs carried by, get ready for this, flying bees. In essence, OlliOlli World is part skateboarding game, part 2D weird-ass acid trip backdrop platforming that just pushes you forward non-stop. If you lose momentum, you might as well restart the segment because that’s a “L” right there.

I’d go so far as to say that OlliOlli World is the Dark Souls of 2D skateboarding-slash-platforming, if such memes are relevant still. OlliOlli World will not take it easy on you after the 2nd world and beyond. There are a huge number of stages that leave you to your own devices, and will act as deterrents until you figure out how to build up speed, or the timing for each trick to make you ramp up more speed to push past the giant gaping hole blocking your progress. You’ll wipe out over and over again, to the point where you’ll even take more than 30 mins to figure out just one stage’s layout & tricks.

But you’ll feel good overcoming its many challenges and how it dishes out its training wheel levels and tutorials before tossing you into the proverbial deep end. Plus, the checkpoint system is pretty generous, at least in the first three worlds before it starts testing you to do long stretches of tricky and near-impossible feats of gravity-defiance.

Even if you’re wiping out continuously, the game’s hip music and chill beats will calm your nerves slightly. But just a tad. OlliOlli World is the kind of game that will get you hooked, and even if you complete it, you’ll want to come back to unlock its other challenges set up by Gnarly Mike, or even beat the other online player’s high score thanks to its asynchronous setup. These extra challenges range from taking tougher routes to “high five” one of your skater group buddies, meet up with the eccentric folks to open up future challenges on the same map, or just do a bunch of specific tricks and collecting/avoiding a good number of collectibles on your skateboarding route.

The majority of why I’m still on OlliOlli World even after finishing its story mode is due to its tight controls and colourful personality. Everything from doing tricks to getting more airtime and speed is just easy to do, but will take a long while to master. Plus, the extra side stuff features a ton of colourful oddities that happen to speak: when’s the last time your quest giver is a fortune-telling fish or a muscle-bound humanoid seagull bro?

Long story short: Roll7 has a veritable and unique indie hit in their hands. OlliOlli World is the mainstream-style 2D skating game that’s paid off from the design lessons the team has gone through with its OlliOlli prequels.