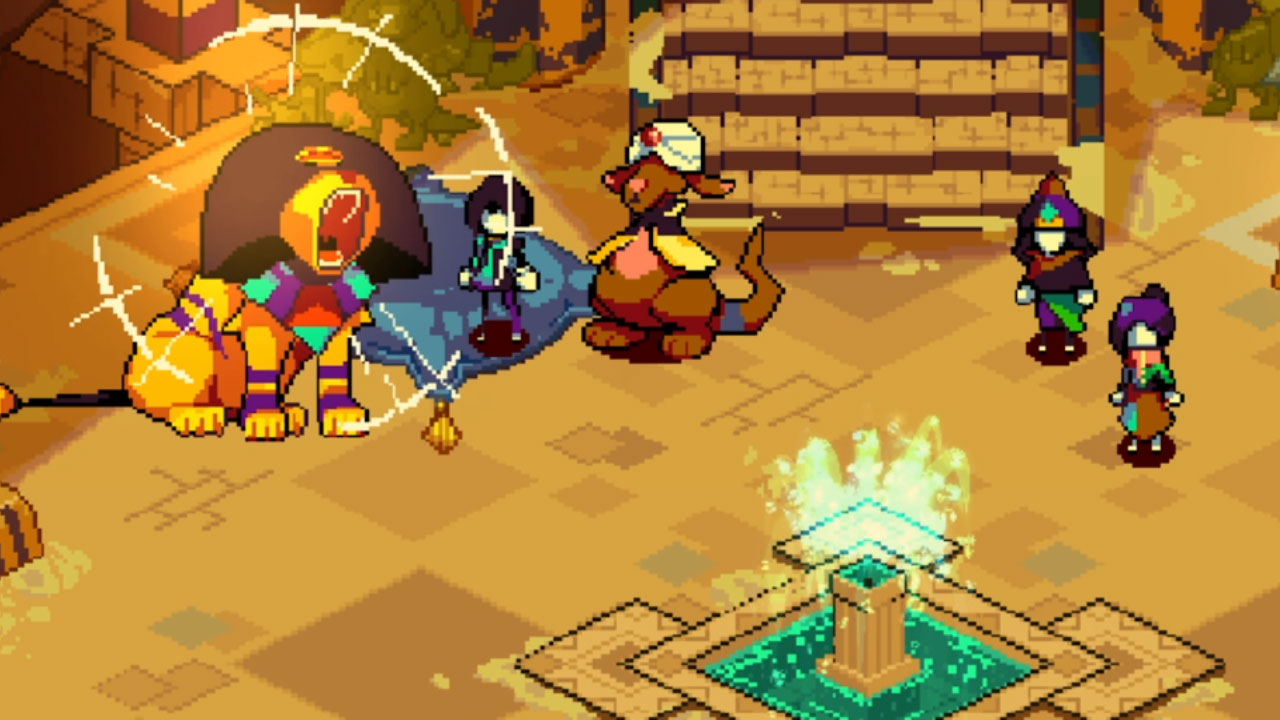 With the Live A Live remake coming later this month, it’s high time Square Enix and other legacy RPG-making game companies start re-releasing blasts from the past. Personally, I would love the Final Fantasy folks to release the Quintet Trilogy set of RPGs which they own from the Enix side of things: Skyblazers, Illusion of Gaia, and Terranigma. Oh, and somehow bring Granstream Saga back as well since it’s part of that set where the actions you perform help build up the world from the brink of nothingness. It shows that your heroic deeds are fixing up the place you’re saving and you get to see the fruits of your labour, while also dealing with storylines on existentialism and the hubris of a civilization that brought them to the state of zero in the first place.

For now though, you can get the lite version of that with this Indonesian-made action adventure title Anuchard.

Anuchard is a 2D RPG where you play a child in a small village who suddenly has the power of a Bellwielder, a type of hero and savior who can bring the civilization of the ancient Anuchard back to its prime by summoning the four Guardians of the world. You do this by going in dungeons and rescuing people who are trapped. As you free the villagers from being encased in stone forever, you open up options to make the village more alive and prosperous, and even open up brand new areas to explore. Rescuing more people means more upgrades for your Bellwielder, who has a light attack, a roll, a heavy attack, and the ability to lay down a Spire on a ground that can either buff you or hurt enemies within its range.

You can even eat food before a dungeon trek to buff up your stats and gain specialized attacks. For instance, eating a combination of potatoes and cabbage can increase your health tenfold and give you an extra projectile attack that returns to you. Different combinations give you different buffs, which you’ll need to make combat a breeze.

Unfortunately, fighting enemies can be too much of a breeze. If you’re looking for challenging 90s action RPG combat on a 2D top down landscape, you may be disappointed. From the start, combat can be tricky when you’re getting accustomed to the controls, and then realizing your dodge and your heavy attack are on one button. It may sound clunky, but it actually works to your favour. Pressing a direction and the Heavy attack makes you roll and dodge in a direction, but as soon as you get into contact with an enemy, the Heavy attack connects. Plus, Heavy attacks are the only way to break enemy armour by pushing them to walls. As you progress deeper into the game and after you find out the best food combination for the best skills, you’ll start to overpower most enemy encounters in the dungeon. Even some of the bosses, while tricky, can be dealt with easily because your default Spire healing ability can sort out whatever health you lost. And it’s easy to get mana back to cast the Spire again.

At the very least, the puzzles can be tricky and require some physics work and Heavy attack projectile-bouncing. Each of the Guardian’s dungeons have a few gimmicks specific to the stage for you to figure out. They’re not super-taxing to the brain, but they do require a bit of mental work to tackle. If you’re familiar with a lot of The Legend of Zelda’s switch-triggering puzzles, you’ll feel right at home here.

I stuck around long with Anuchard, and I must say the soundtrack, its unique “faceless denizens” look and “simple” pixel art style, and most of its cast grew on me, even if some of the game’s dialogue is filled with grammar errors here and there. It’s awesome to see how the game’s humble Orchard Village evolves from a peaceful abode to a place with blessings from the Guardians, and having the question of “how far can one reach the apex of civilization without getting burned?” thrown in here and there with unsure answers.

However, the game does rush to the finish line after the third major section of the game. I wished the whole experience was two major sections longer -gameplay and story-wise- to round it up to 10+ hours. Instead I have a 7 hour or so experience that was still fun, but could use more taxing areas, levels, and two more bosses to feel like a more complete and satisfying package. I understand the need to not pad games for more hours than they’re worth, but in Anuchard’s case, it needed more.

Still, what we have here in Anuchard is still solid as its obvious inspirations from the Enixi era of RPGs. Developer Stellar Null does its best to reach those heights set by Quintet and its legendary RPGs, and at least comes pretty close. That is already a feat in itself given how lean the Indonesian dev team is.

If you have love for 90s style action adventure titles ala the Soul Blazer trilogy, but with a touch of whimsy and a unique art style, pay a prolonged visit to this blessed garden of a title. You’ll stay long for its charm and experience, longing for something a tad lengthy in the end.

Assassin's Creed Odyssey Is A Greek Journey Worth Taking