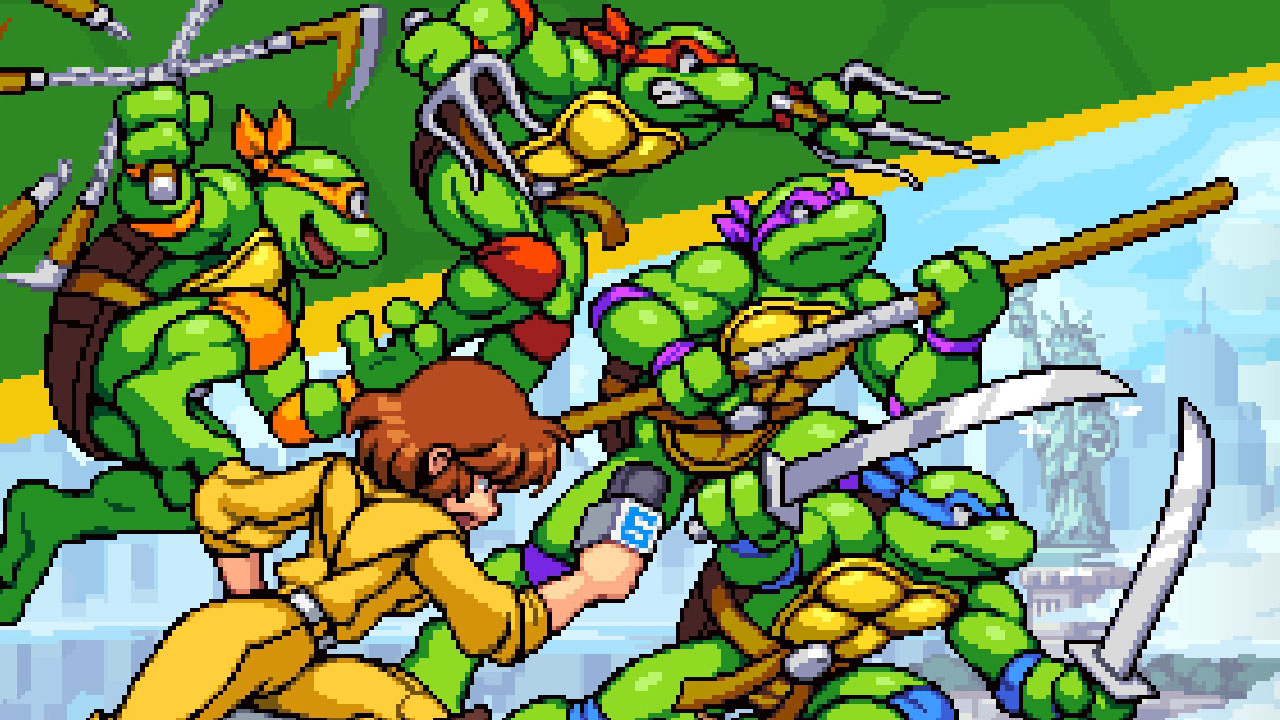 The late 80s and 90s Konami licensed beat-em-ups, particular the ones with the iconic Teenage Mutant Ninja Turtles cartoon series, rely on fast-paced offensive gameplay, simple controls, and relentless hordes tossed at you, along with major multiplayer options to keep players entertained and challenged. While half the time they’re made to just be cheap and get as many tokens/coins from you in the arcades, they’re still fun and attractive in short bursts; you’ll be done with the game in less than an hour whether you beat it or not.

Now, how would one transform that kind of bright and addictive gameplay for 2022, especially for a more fussy and hungry audience? Simple: you just make a game for fans of said licensed property and genre, while double downing on what makes them great. At the same time, add in defensive mechanics and design a control scheme so intuitive and smooth they have no one to blame but themselves if they messed up. Oh and a touch of replayability options to keep people hooked.

2022’s Teenage Mutant Ninja Turtles: Shredder’s Revenge from Dotemu and Tribute Games is essentially that, and delivers a lot for its target fanbase.

As both a fan of the Ninja Turtles properties and 2D beat em ups -River City Girls and Streets of Rage 4 being my benchmarks for top tier genre picks- TMNT: Shredder’s Revenge is a heckuva feat. The premise of  the game is easy to follow: you have to go through 15 stages chasing after big bad boss Shredder’s goons from gathering Krang’s uber-robot body and combining it for ultimate power. And yes, Krang is a talking brain with tendrils for hands who probably has a speech impediment. The plot here isn’t important: it’s the action and homages that comes with it. And boy, it’s as colourful and as 90s as they come.

It’s not just the 2D pixel aesthetics and music that really shine, but also the love and care put into making it a 90s TMNT product tailored for the current gaming generation. From the theme song by Mike Patton to even the cameos and nods to the series, everything here will make the most jaded of Turtles fans feel warm and fuzzy inside.

Gameplay-wise, you control any one of the Turtles and their pals, each with their own strengths and weaknesses though they almost play similarly. Almost.

Some additional mechanics to keep note here: your characters can dodge (and comes with a follow-up quick lunge), and also can taunt enemies to charge 1 level of Ninjitsu power for Super AoE moves. You can also hold the attack button and then let go to unleash a guard-breaking attack. And pressing the attack and jump together unleashes an anti-air attack that you can follow up with the patented TMNT arcade game divekick or a Super groundslam that hits anything close to its landing area.

All these additions are a huge improvement over the other TMNT titles where you use your lifebar for Supers; no need to worry about going down to one life and being unable to use your Super. You just need to charge it via the aforementioned Taunt (which will leave you wide open for a second or two) or just  beat up enemies. The guard breaks are handy in dealing with shielded foes, while dodging has so little recovery frames that very skilled players can go through the game untouched with this tool.

All these moves and options do not make the game easy though: enemies can still gang up on you and take down all your life if you’re careless. Some enemies have armour, while others purposely switch up their routine just to get a cheap shot at you. There are a few times when all this makes the experience seem cheap, but you have a ton of tools at your disposal to get through all of it. The big takeaway here from all this is that the controls are buttery smooth and the 2d beat-em-up challenges are fair.

Scoring is a big factor here. Get a high score by doing fancy moves and combos, and you level up the character you’re using so that they get extra hit points and special moves like a Super Dive Kick or Super Dash Attack.

Most importantly, TMNT: Shredder’s Revenge is built as a team game where having an extra friend or 5 will make the experience all the more fun. Plus, when playing co-op, you gain access to awesome tag-team moves like pincer attacks and fastball specials where you throw your pal towards the enemy for max damage. There are also moves that let you give part of your full life bar to your friend who needs it via a simple cute high five, and also a chance to resurrect a downed partner with a few seconds of pizza-waving. Additions like these, along with simple drop-in and drop-out options make the couch co-op play great; it’s a feature that’s sorely missed in gaming these days where the majority of it is all taking place online. Yes, you can play online co-op here but it’s not the same as shouting and cheering among your pals as you’re fending off waves of robot Mousers and Foot Soldiers, arguing over who should get the pizza box or who should take point in performing the TMNT equivalent of the fastball special.

If you’re a tough enough dude and need more out of TMNT: Shredder’s Revenge, you can play Arcade Mode where your continues are limited and there are no retries after that. I’d suggest playing this mode after a few rounds in Story Mode getting the lay of the side-scrolling land and enemy placements; it gets really rough on higher difficulties as the Foot Soldier swarms are plentiful and bosses have new attacks to take into account.

The game also has collectibles that help boost up your points for additional Story Mode powerups; break open a door, for example, and you’ll let out Irma who needs her secret diaries in exchange for points. Simple stuff, but you’re only going back to the game to either max out your characters or getting a high Arcade Mode score on the leaderboards.

My only issues in this clearly nostalgia-filled game is minute and nitpicky: the top user interface doesn’t expand automatically if you’re playing single-player mode, and the genre tropes of repetition does rear its head. Still, the game’s 2.5 hours Story mode is considerably meaty and varied, with stages featuring hazards from the past (ice turrets, moving turrets, and so forth), air skateboarding segments that auto-scroll, and fun boss fights.

If you are a huge TMNT fan since the 80s, this game’s a huge love letter to the franchise, cameos and all. If you loved the beat-em-up games Konami made before they became, well, Konami, this game will definitely sate that thirst.

Sure, it does pale in comparison to the top-tier beat-em-ups like Streets of Rage 4 in terms of staying power. But I would be lying if I said I didn’t have fun playing this solo and with 5 other friends in what could be a fun couch party game with easy controls and tough challenges that could require a friend’s help or two. Plus, Streets of Rage 4 is quite a high bar for modern beat-em-ups.

TMNT: Shredder’s Revenge is a hella fun and cheery beat-em-up that feels meaty and doesn’t wear out its welcome, especially with friends. And when’s the last time you’ve touched a Ninja Turtles game with this much love dedicated to the franchise and its 90s 16-bit & arcade video game legacy? Exactly. Score one for Tribute Games and Dotemu yet again for delivering a nostalgia-savvy hit that will shellshock even the most jaded of retro gamers.

Need help with the game? Here’s a quick guide.

The Ascent Is Not Xbox Exclusive Anymore Starting Next Month