Everything That Will Be Available During Modern Warfare II’s Launch

Call of Duty: Modern Warfare II’s official release is less than 24 hours away now, and with that Activision Blizzard has come out with a blog post entailing everything that will be available at launch.

Depending on the platform, pre-load the rest of Modern Warfare II before or during Campaign Early Access to ensure Multiplayer and Special Ops are ready to play at launch. 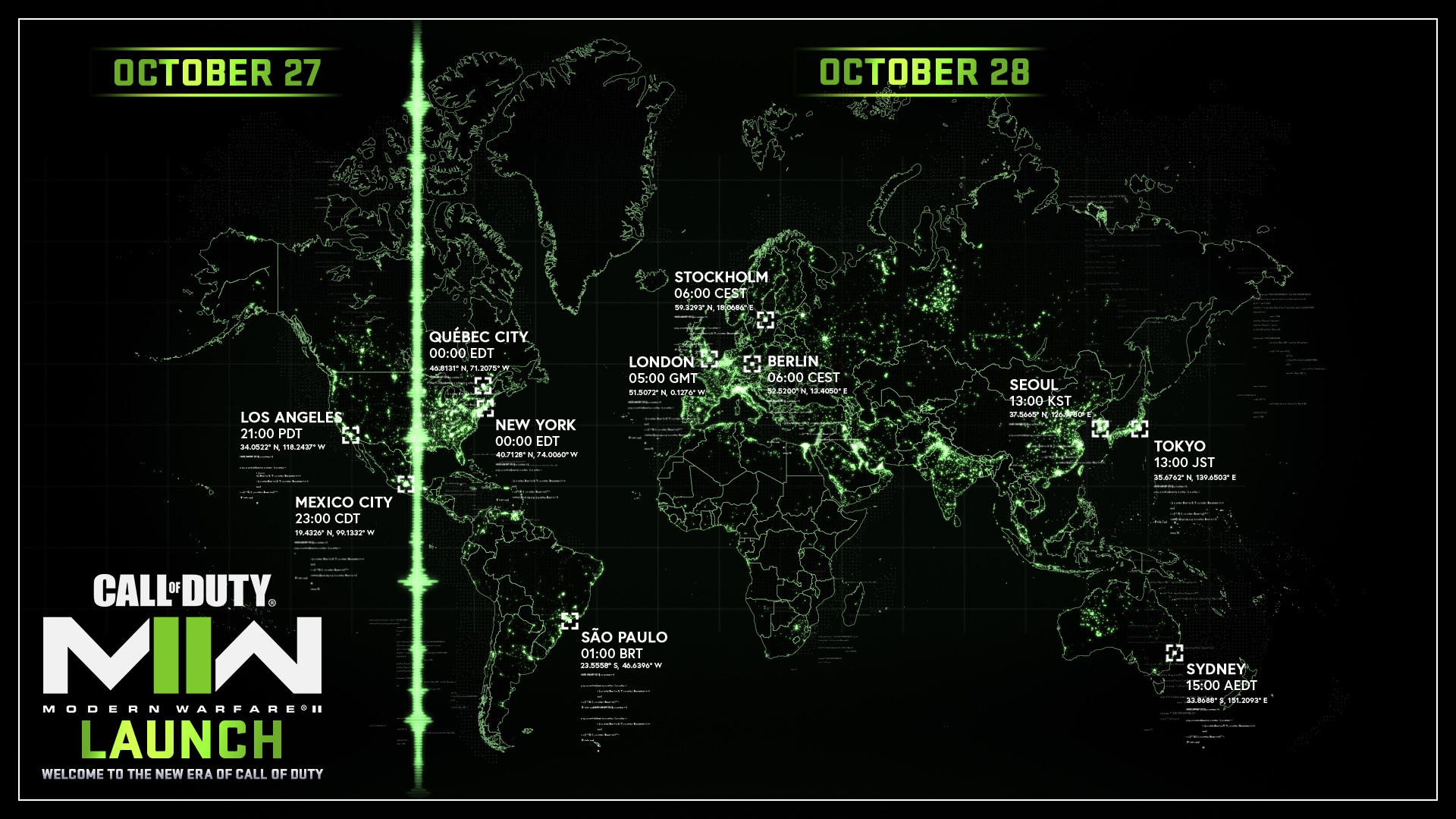 In addition to the Campaign, dive into an immersive, world-class Multiplayer and an evolved Special Ops co-op experience. Also, RICOCHET Anti-Cheat fully activates around the world with new and updated security measures.

Level up through the Military Ranks to unlock all base Loadout items, complete each Weapon Platform’s progression tree to unlock all weapons and attachments, and progress through each Special Ops Kit’s tier system ahead of Season 01. Once the game launches, Vault Edition owners gain access to the FJX Cinder Weapon Vault** and Red Team 141 Operator Pack, and for those who unlocked rewards during Campaign Early Access and the Beta, rewards will become available once the full game is live.

In addition to a host of other content, a returning fan-favourite Multiplayer map and additional Special Ops missions arrive to Modern Warfare II. All players can drop into the all-new Al Mazrah map as part of Call of Duty: Warzone 2.0, survive a brand-new experience in DMZ and enjoy a new Battle Pass system and two free functional weapons. Vault Edition owners can activate their free seasonal Battle Pass unlock and 50 Tier Skips***.

Special Ops receives the very first episode of Raids for Operators to master. Plus, another legendary Multiplayer map comes to Modern Warfare II, while Call of Duty: Warzone 2.0 has its first post-launch update.

The Modern Warfare II Campaign offers completion rewards for use in Multiplayer, Special Ops, and Warzone 2.0. 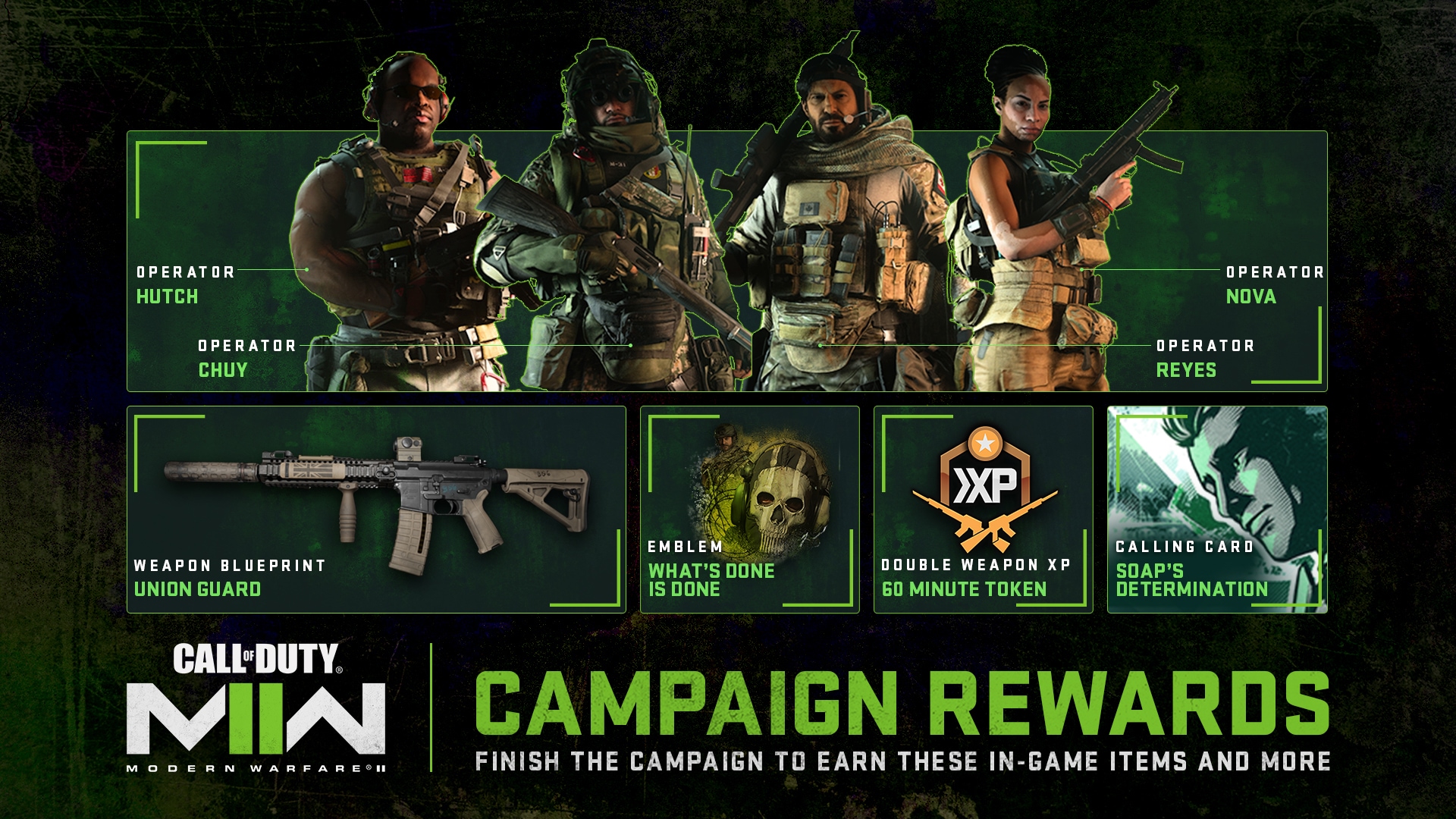 This is everything you can unlock in order:

These attachments make this Weapon Blueprint an all-around great Primary Weapon; it is an excellent starting point for players of all skill levels across all game modes. Compared to the base weapon, this Weapon Blueprint offers more stability when aiming, reduced vertical and horizontal recoil, and a clear sight picture among other benefits like sound suppression.

Plus, you can use the Early Access period to knock out most of the platform-specific accolades, which are equal parts points of pride and practice for other modes.

One of these challenges involves completing the Campaign on either of the hardest difficulty settings: Veteran and Realism. The latter turns off all HUD and lowers health for a true test of ability. Complete it, and you will be well prepared to face the AI combatants in Special Ops, Multiplayer, and Warzone 2.0.

The accolades and items can be unlocked at any time in Modern Warfare II. However, with a full week of Early Access, this is your opportunity to earn everything in Campaign before the full Modern Warfare II game launches. 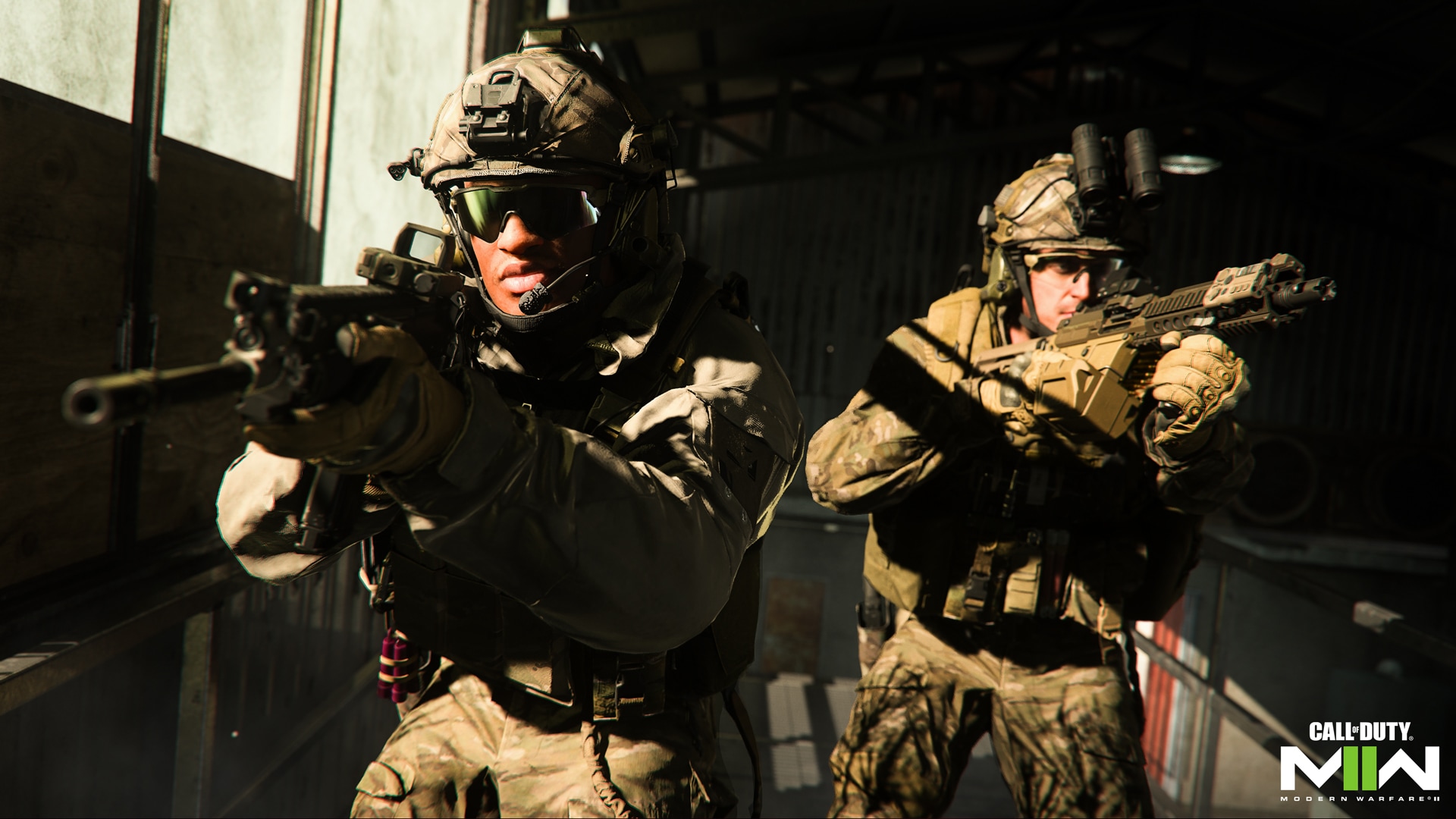 Modern Warfare II Multiplayer defines “emergent gameplay” with a focus on variety; those who played the Beta already got a glimpse of the game’s assortment of modes, locales, and Loadout items.

On day one, there will be 12 unique modes: 10 traditional modes on Core Maps and two Ground War modes on Battle Maps.

These maps are grouped into one of three regional categories: 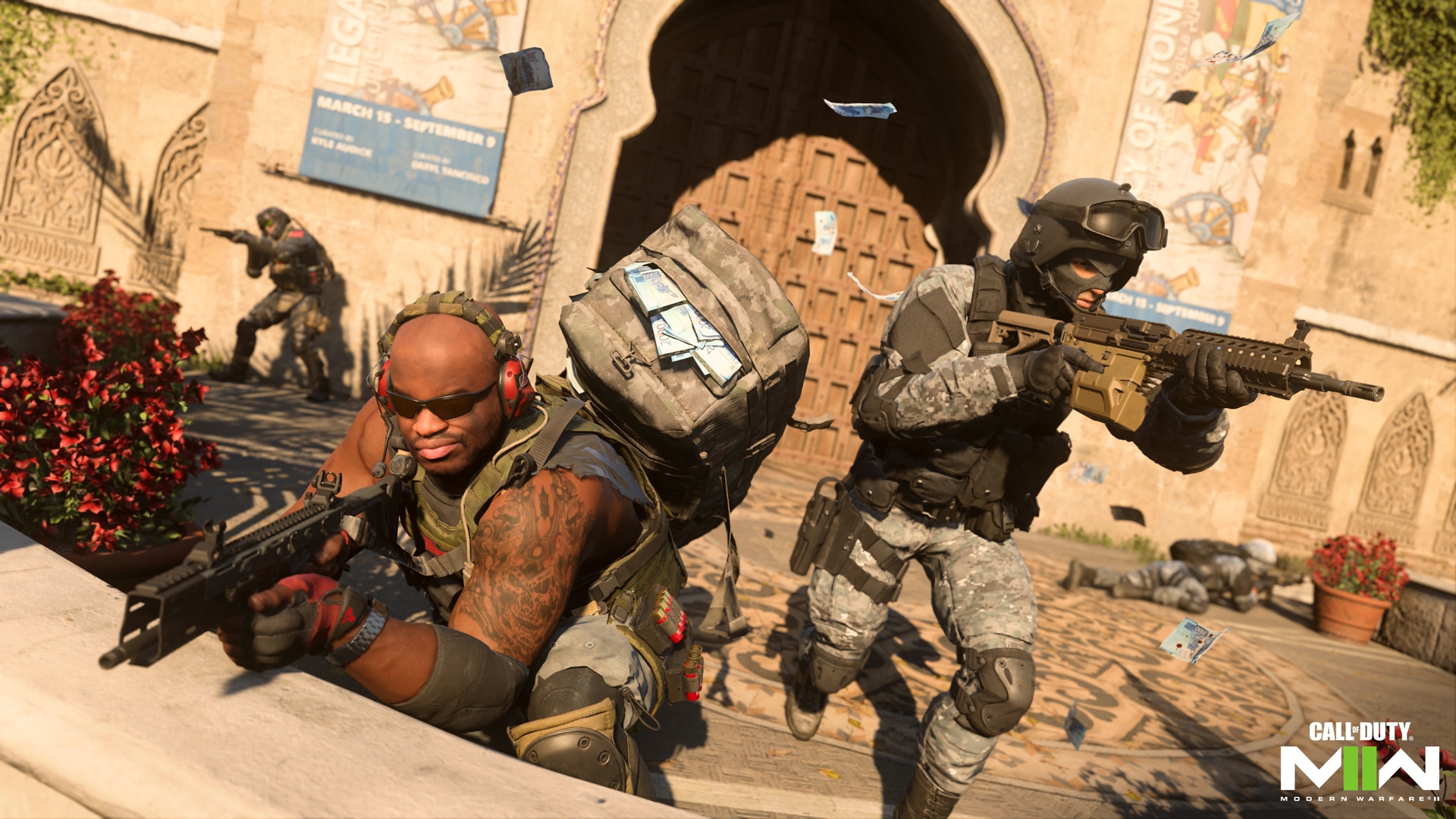 This metropolitan area and its outskirts within the Republic of Adal serve as the main region for Call of Duty: Warzone 2.0.

Several Core and Battle Maps will be based in this region, making Multiplayer a phenomenal place to learn some of its points of interest in detail. 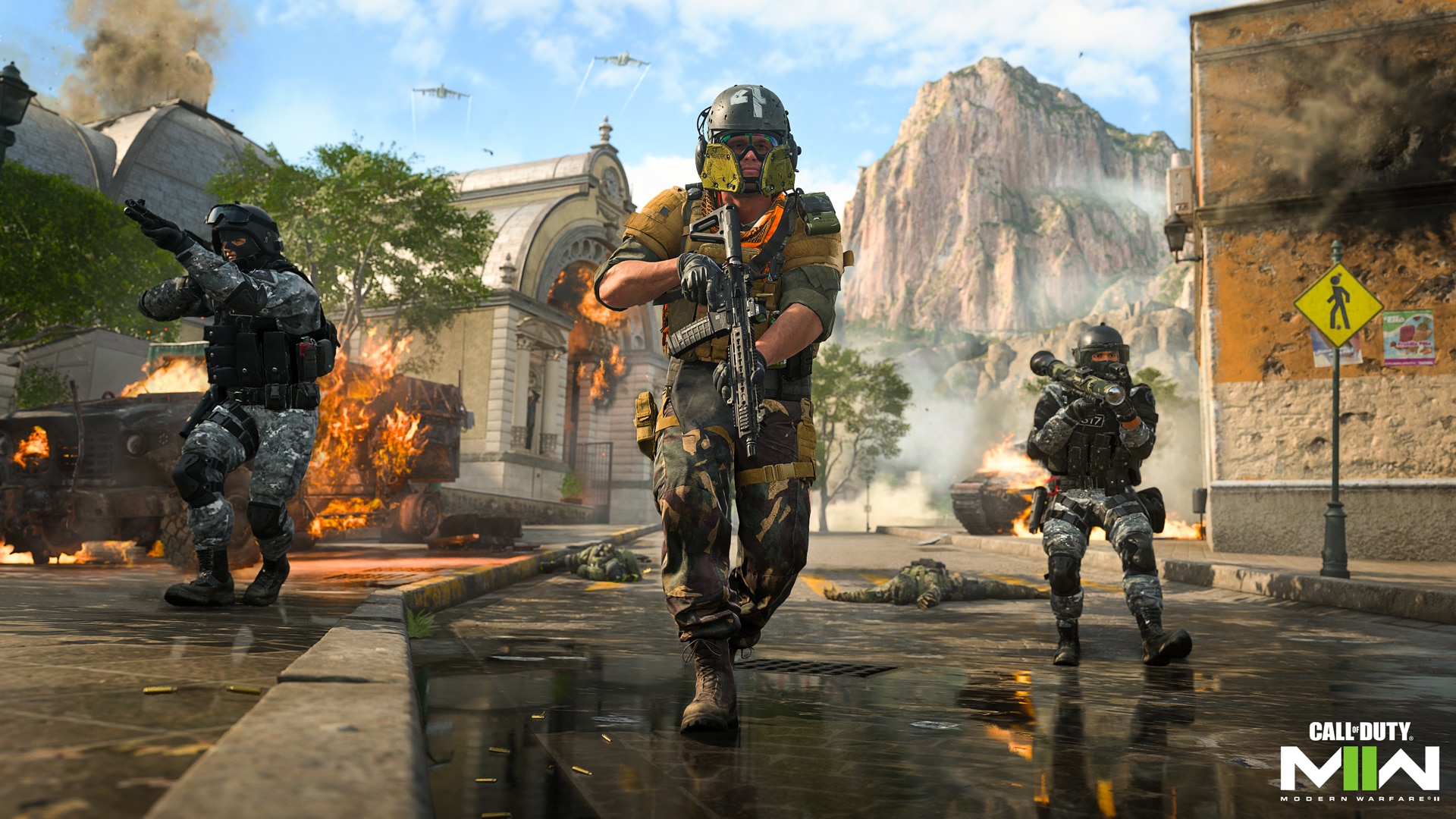 A major place of interest within the Modern Warfare II Campaign, Las Almas is a Central American region with a similar footprint to Al Mazrah.

In Multiplayer, the region will host a similar split of Core and Battle Maps. 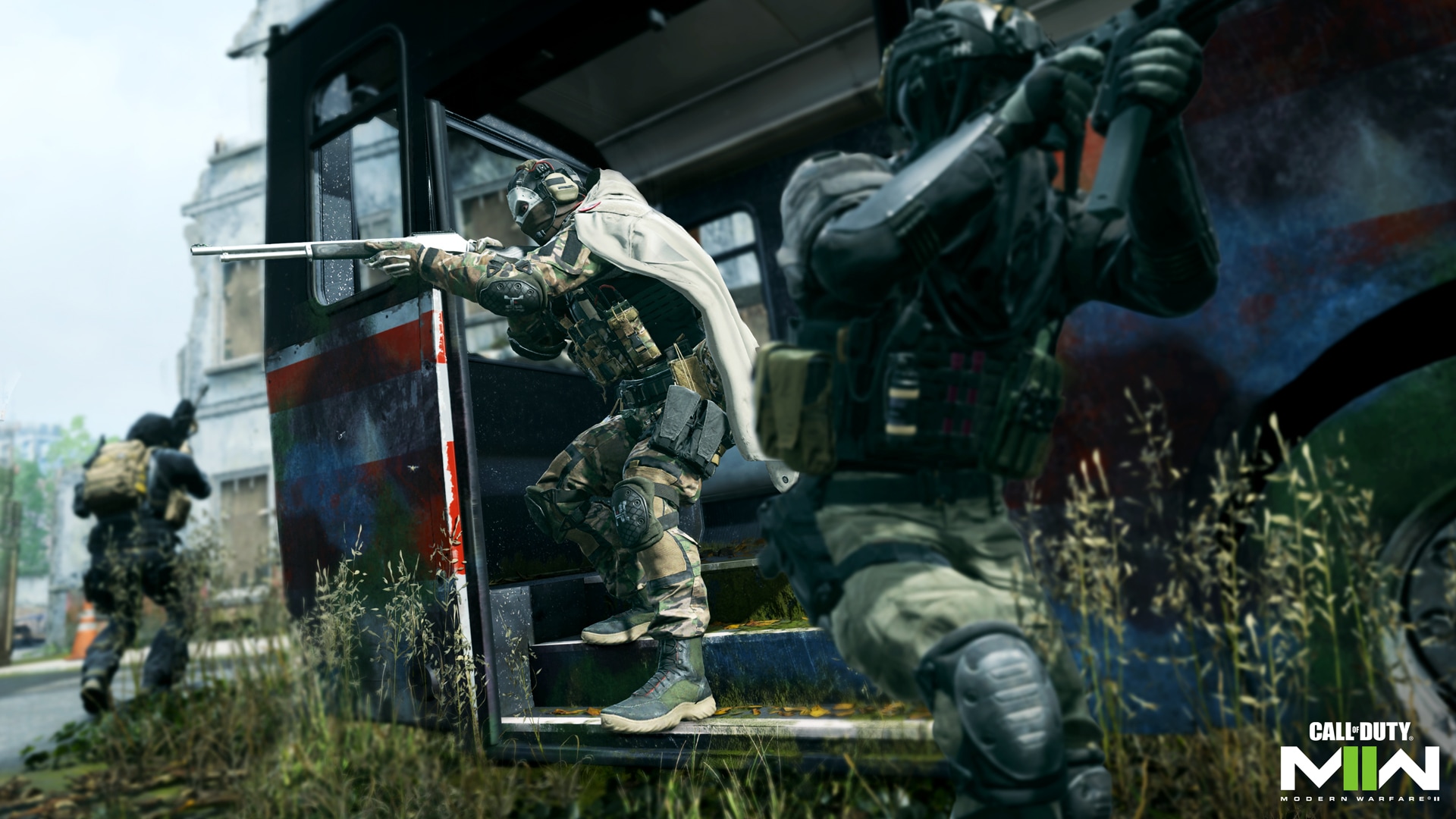 Rest of the World

The last group of Multiplayer locales is an assortment of Core Maps with no specific region. A mixture of places within the Campaign and completely outside of the entire main storyline, these maps round out the Modern Warfare II universe with glimpses of what is happening outside of Al Mazrah and Las Almas.

Prior to the full game release, expect this blog to bring you a full breakdown of all Multiplayer-specific features, including maps, modes, and launch Playlists; tips on creating a Loadout; and more. An evolution of the Special Ops mode from Modern Warfare (2019), this co-op experience will initially feature three missions at launch, all taking place in Al Mazrah: 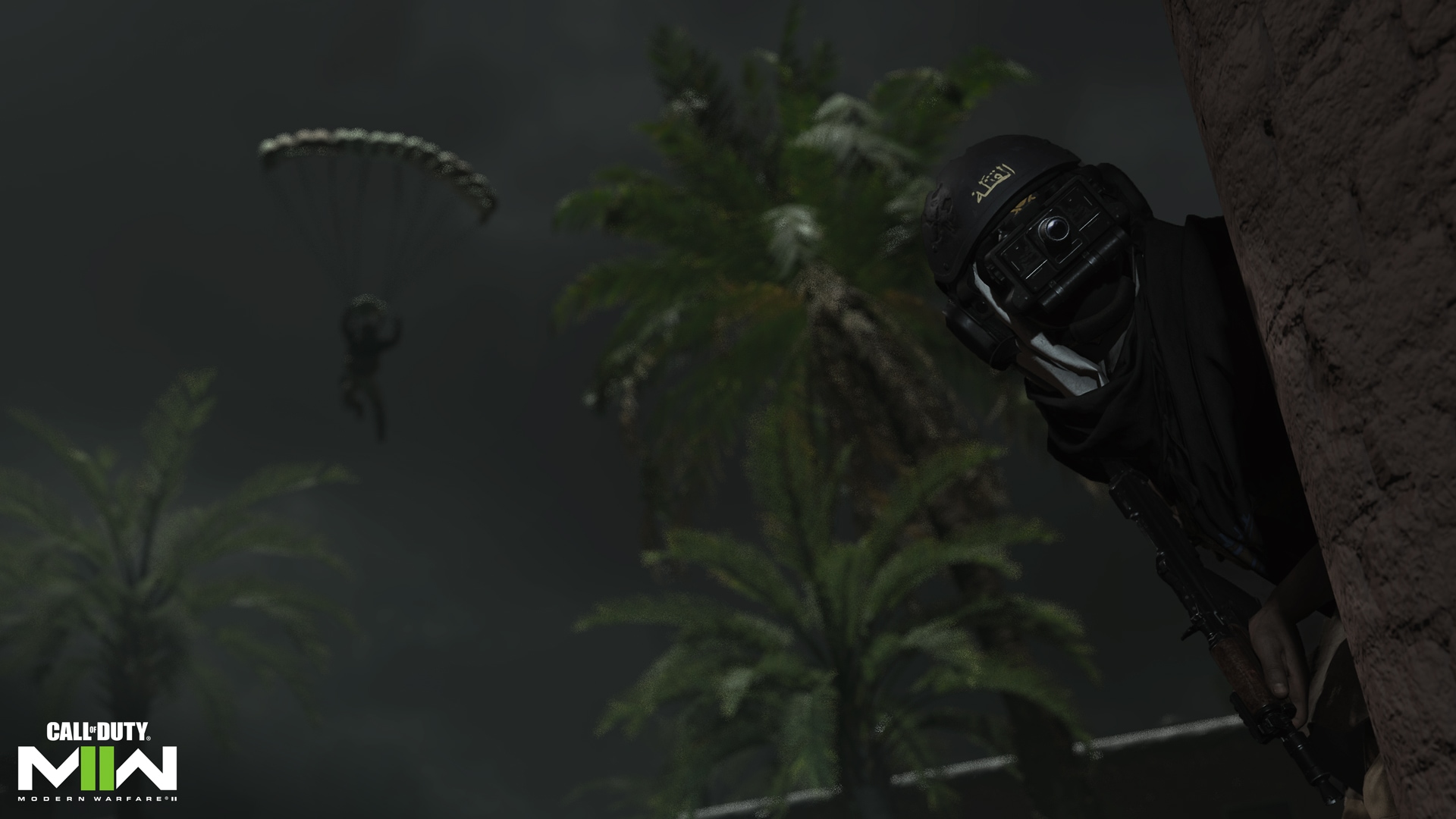 Infiltrate a town in the dead of night to uncover intel and evidence left behind by Al Qatala before exfiltrating. Stealth is key to survival. 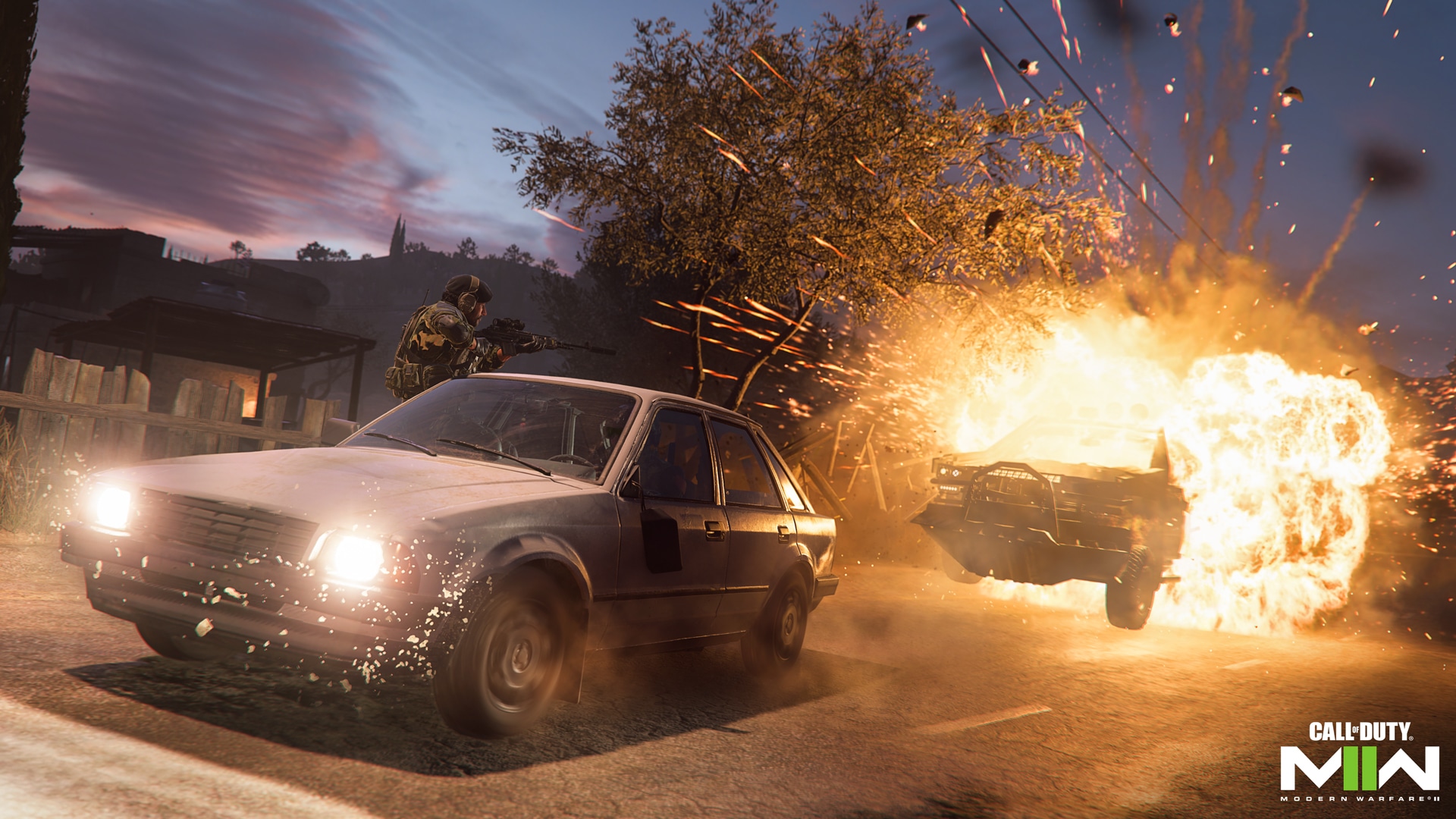 Multiple SAM turrets are preventing reinforcements from entering Al Mazrah. With the help of a vehicle, navigate through the winding streets of a suburb to destroy them; then speed over to the exfil plane to escape. 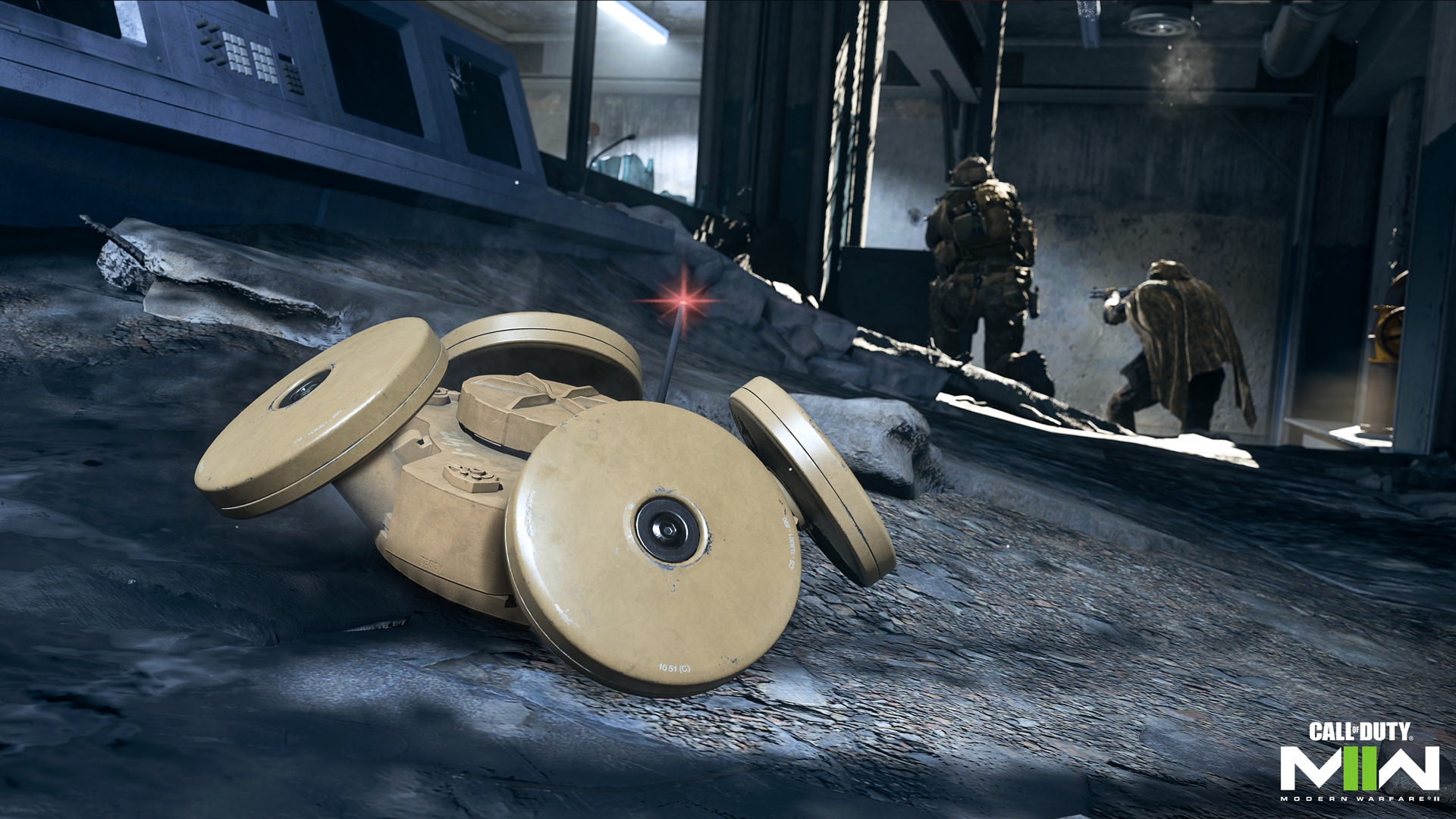 A love letter to fans of survival modes — defend the observatory from increasingly difficult waves of enemies attempting to detonate bombs. Between each wave, Operators can spend cash to get items, such as Killstreaks, Self-Revive kits, and armour plates. 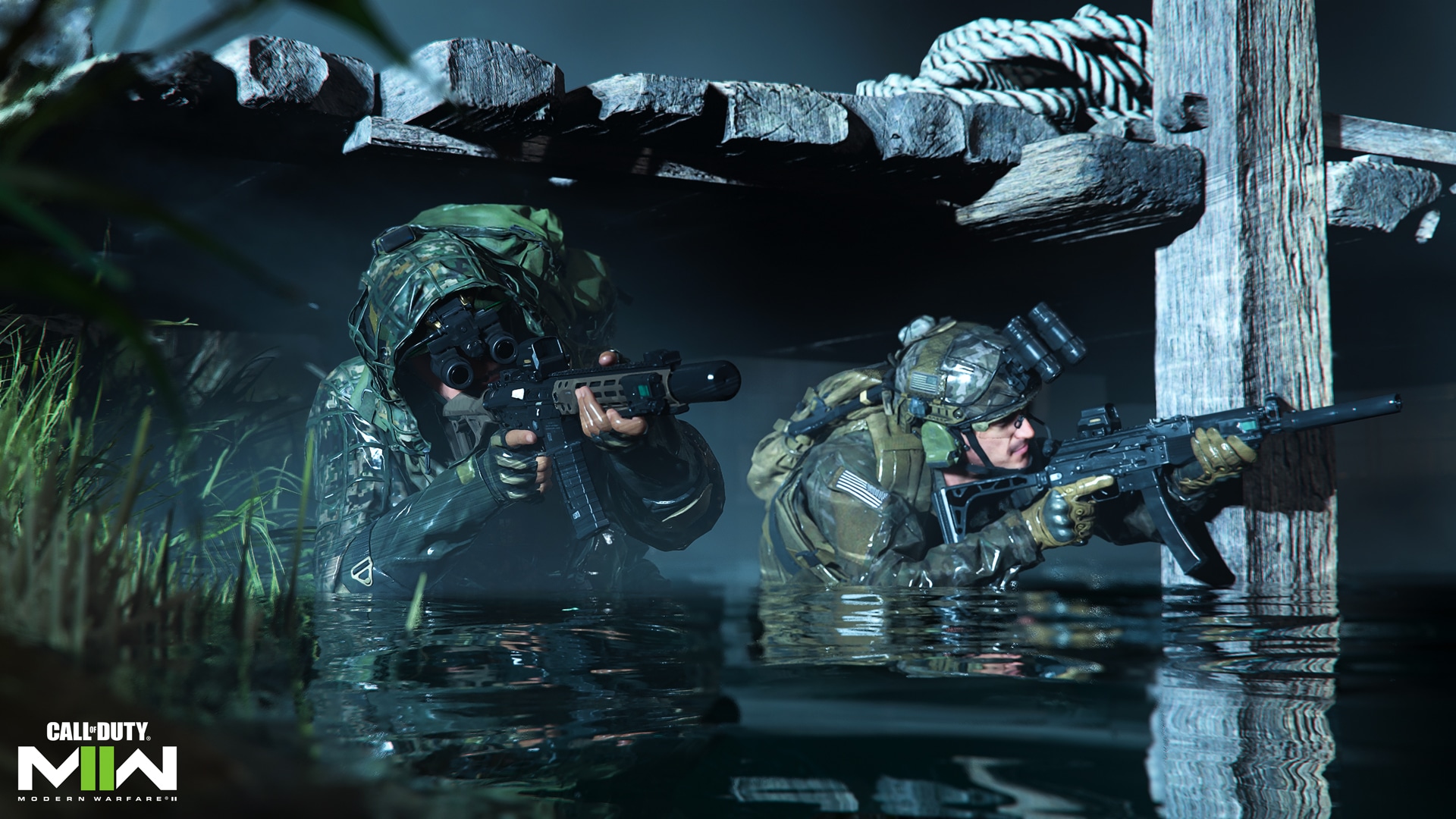 In Special Ops, Operators will have access to a Backpack to store equipment and one of three Kits that are similar to a set of Perks, Field Upgrades, and Killstreaks in Multiplayer:

Medic: Kit focused on quicker revives with a Revive Pistol Field Upgrade for ranged instant revives — later levels include a free Bomb Drone, similar benefits to the Double Time Perk, and free Claymores and anti-tank mines included in the Backpack.

Recon: Kit focused on better equipment usage with a Snapshot Pulse Field Upgrade to see nearby enemies — later levels include the ability to automatically restock Lethals and Tacticals over time, the ability to carry extra equipment, and a free Heartbeat Sensor and Spotter Scope included in the Backpack. 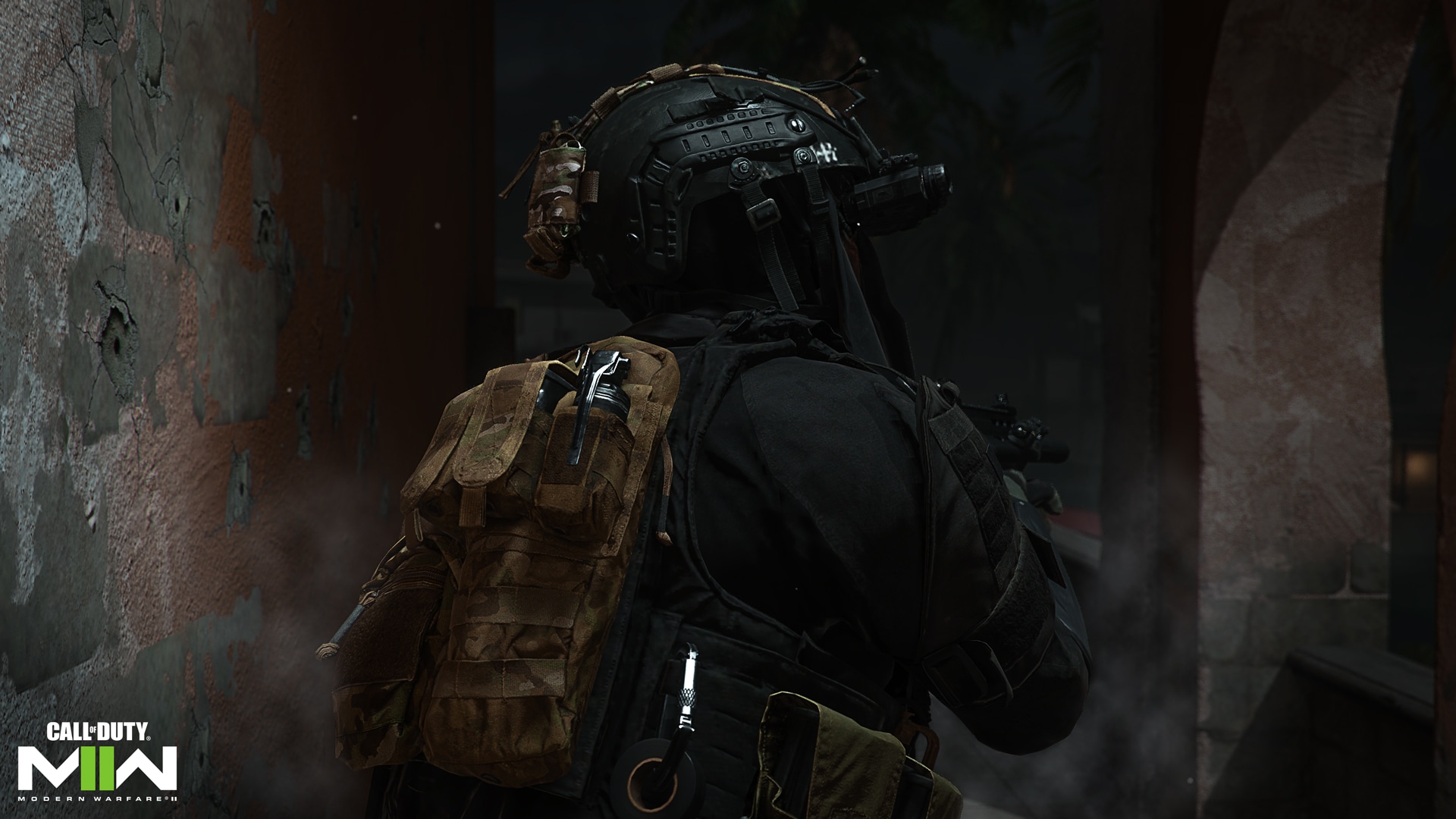 Kits are levelled up by earning Stars through missions and mission-related challenges, which gives all three of these launch missions plenty of replayability.

We highly recommend completing all three Special Ops missions with three stars and having at least one Kit levelled up to Tier 5 before Raids, a direct continuation of the Campaign, are introduced to Special Ops later in Season 01. 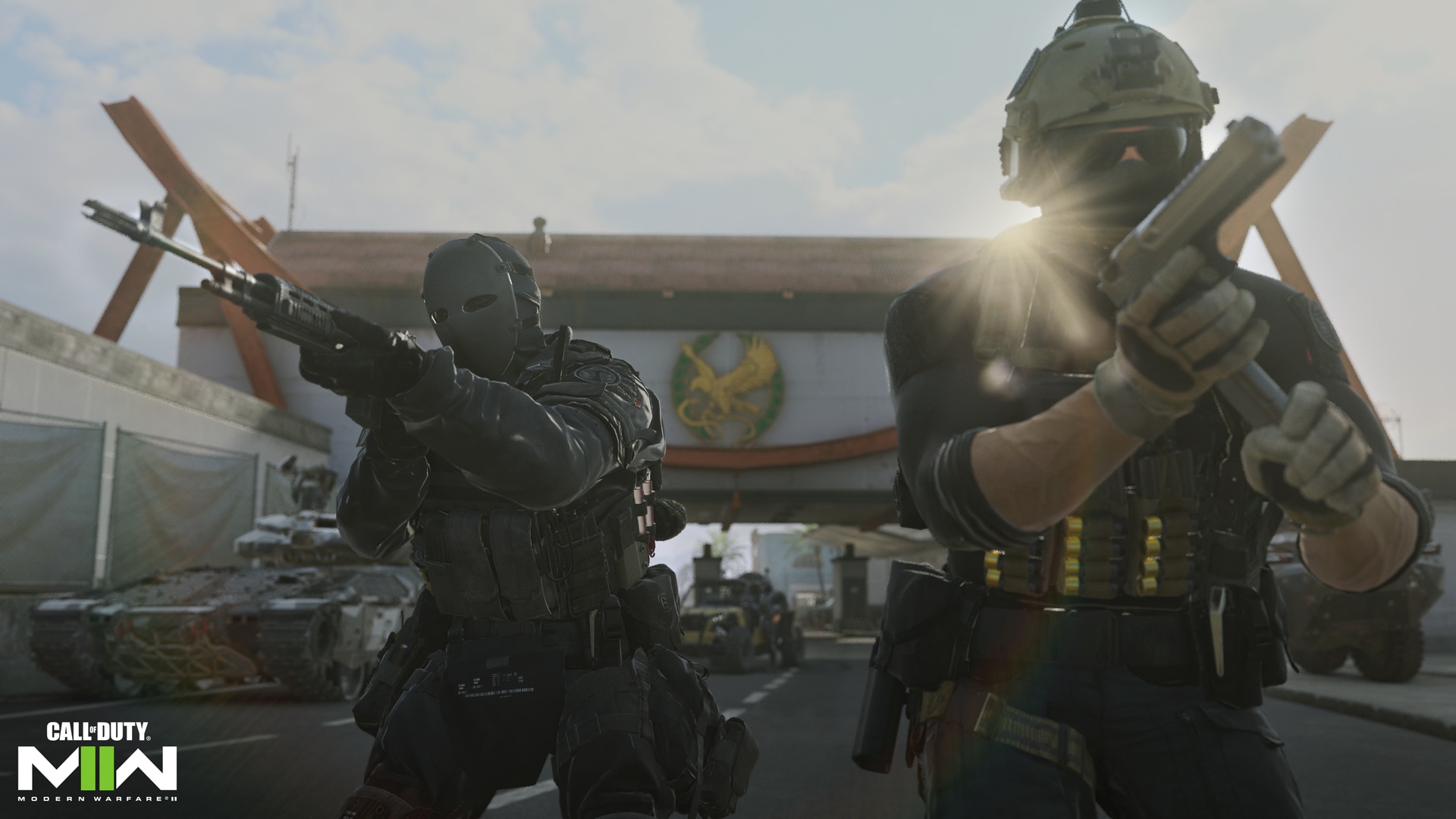 At launch, there is more to Modern Warfare II than the traditional Military Ranks.

Prior to Season 01, which will feature a new Battle Pass system and Seasonal Prestige, players will have access to the following Progression systems:

Expect a breakdown of all these Progression systems in a dedicated blog within the game’s release window. 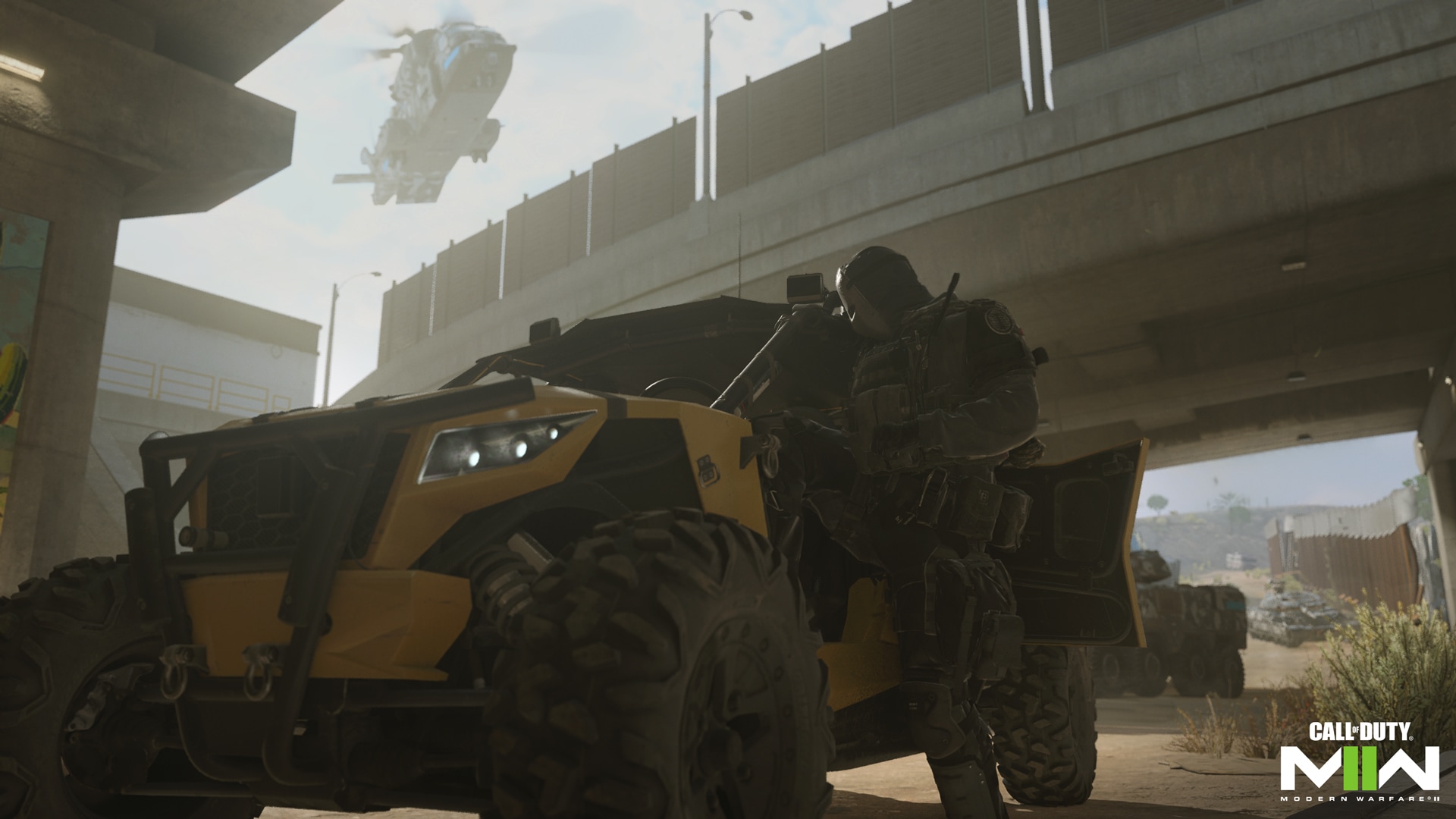 Through Modern Warfare II Multiplayer and Special Ops, familiarize yourself with the core of Call of Duty: Warzone 2.0:

Operators — 25 Available at Launch. Eighteen can be unlocked during the Modern Warfare II pre-season. Plus, get two Mil-Sim Operators with four unique outfits unlocked by default, four unlocked via the Vault Edition.

Weapons — Over 30 Weapon Platforms at Launch for Over 50 Unique Weapons. Get anywhere from one to six unique weapons per platform. Vault Edition owners gain access to the FJX Cinder Weapon Vault, which contains all Receivers and attachments for one of the Weapon Platforms available at launch. Beta participants will have access to both their Weapon Blueprints, if unlocked during the Beta period.

Gameplay Mechanics. Movement, firing, and other fundamental features are shared between all games within the Modern Warfare II universe.

RICOCHET Anti-Cheat™. The system will be actively monitoring and taking action against cheaters in Modern Warfare II, learning how they operate to mitigate unfair play across both games. 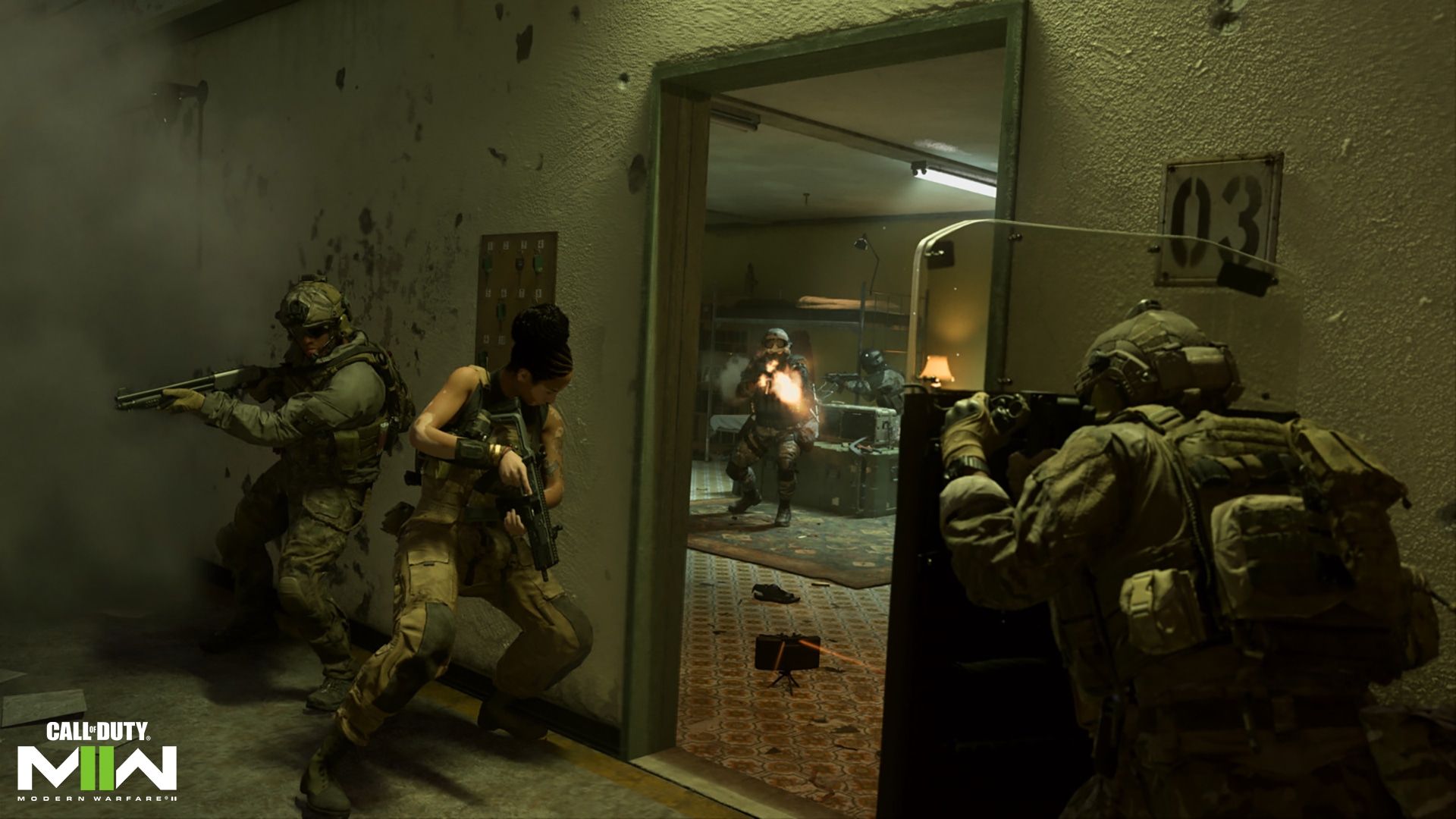 At launch, there will be 33 unique Weapon Platforms available to unlock through the Military Ranks. Each Weapon Platform can contain up to six weapons, which can be obtained by levelling up specific weapons within a Weapon Platform.

By unlocking all these Weapon Platforms and completing all applicable Weapon Platform progression thresholds, you will have 51 Primary and Secondary Weapons to choose from for a loadout: 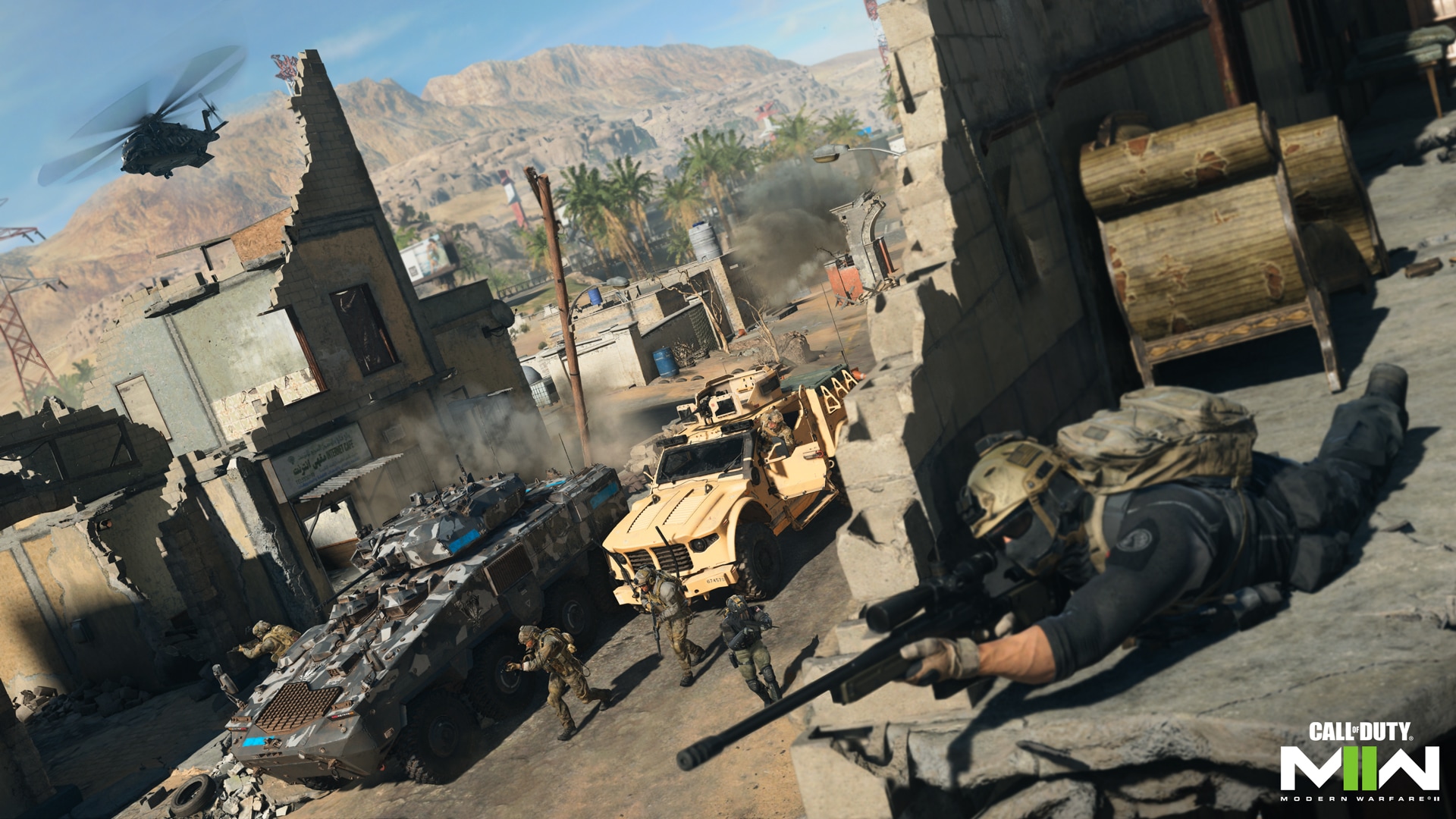 Along with weapons and Operators, Modern Warfare II shares its core features with Warzone 2.0.

From movement — boots on the ground, swimming, and vehicles — to firing and even locations, playing Modern Warfare II allows you to get comfortable with most of what you will find in the forthcoming free-to-play Battle Royale experience.

RICOCHET Anti-Cheat on Day One 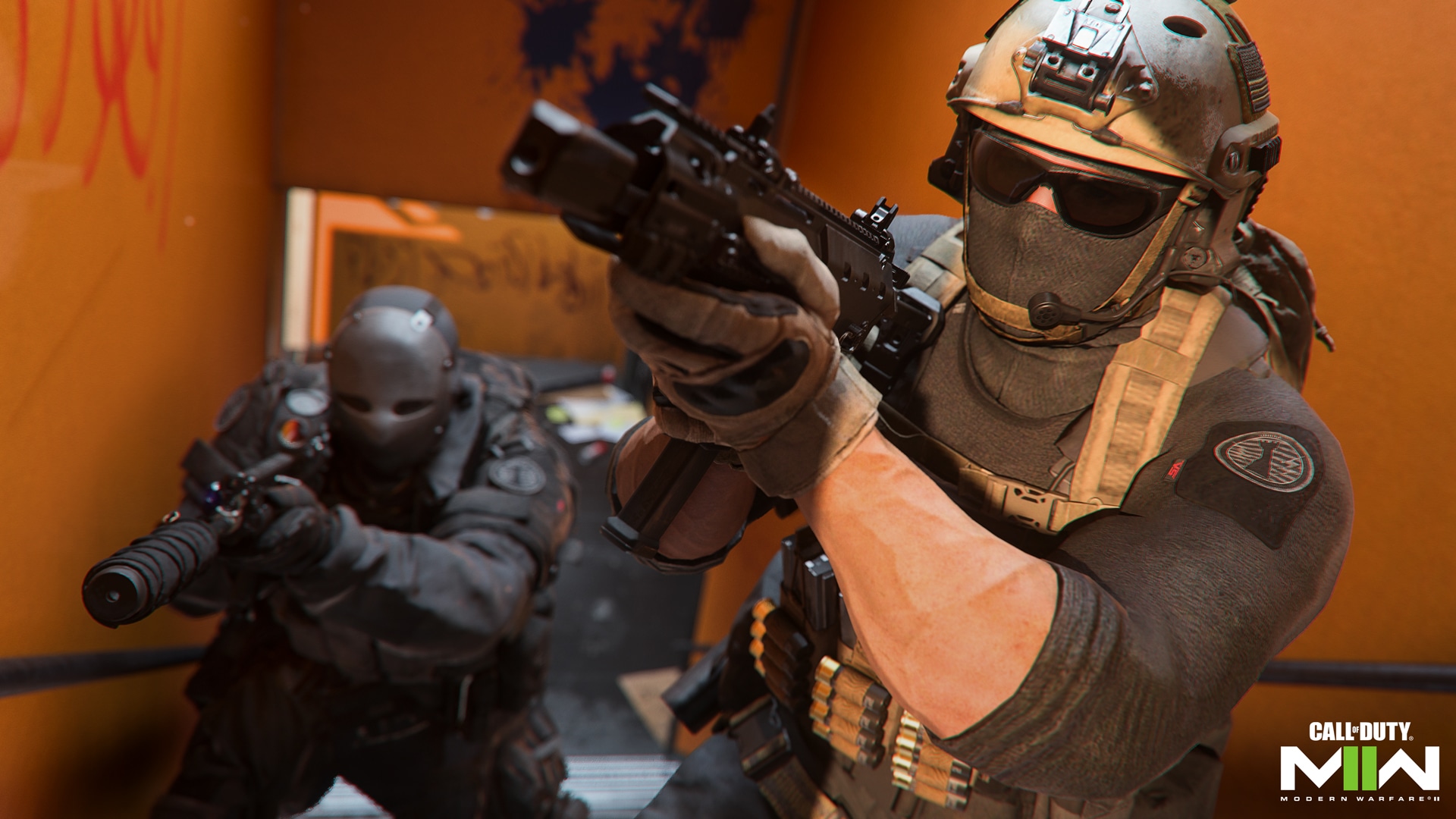 Read the update from the RIOCHET Anti-Cheat team here for more information. 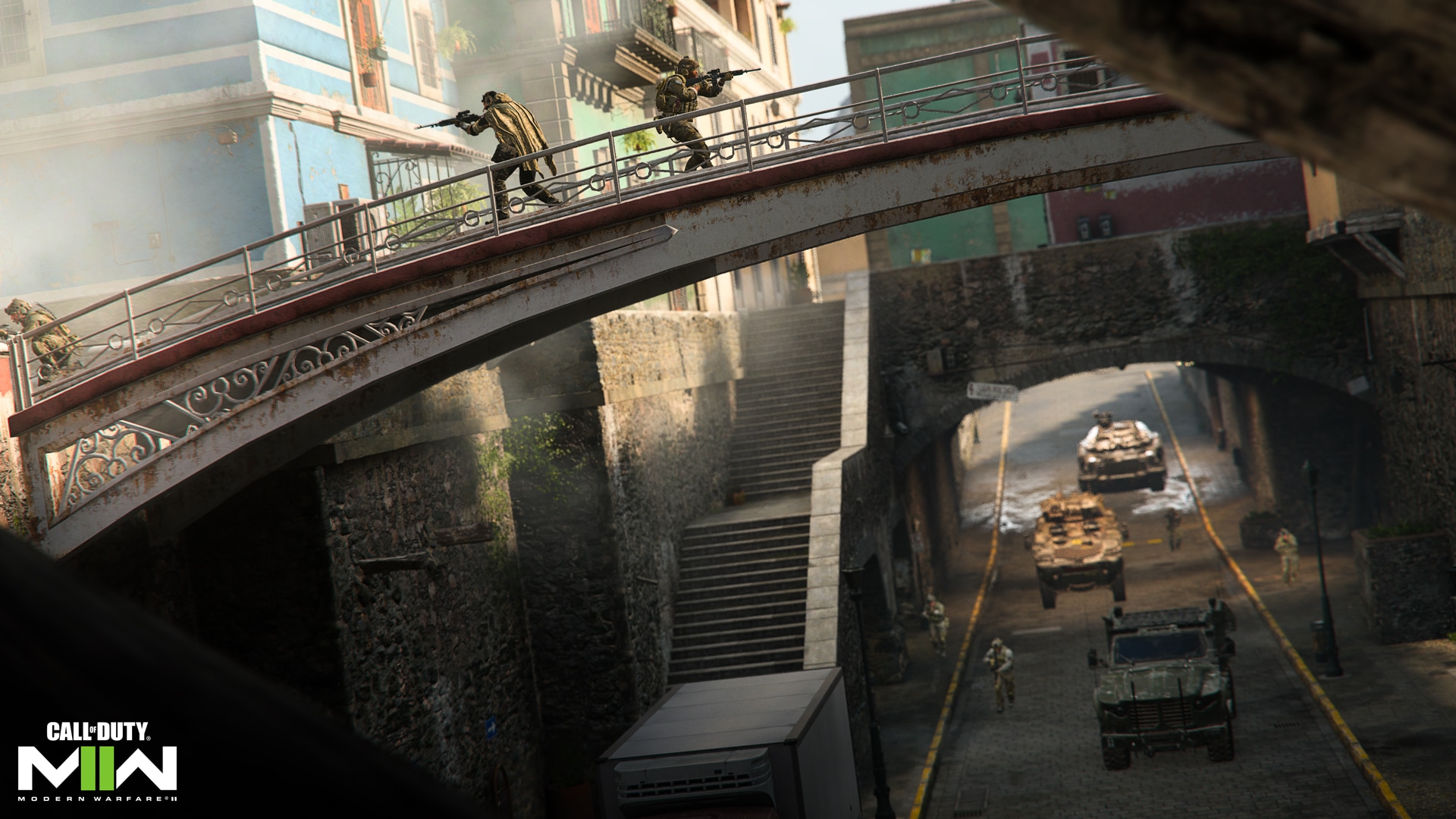 Outside of Modern Warfare II, get exclusive in-game rewards by watching any Twitch.tv stream of the game during launch week, and celebrate the launch with new Task Force 141-themed gear at the Call of Duty Shop. 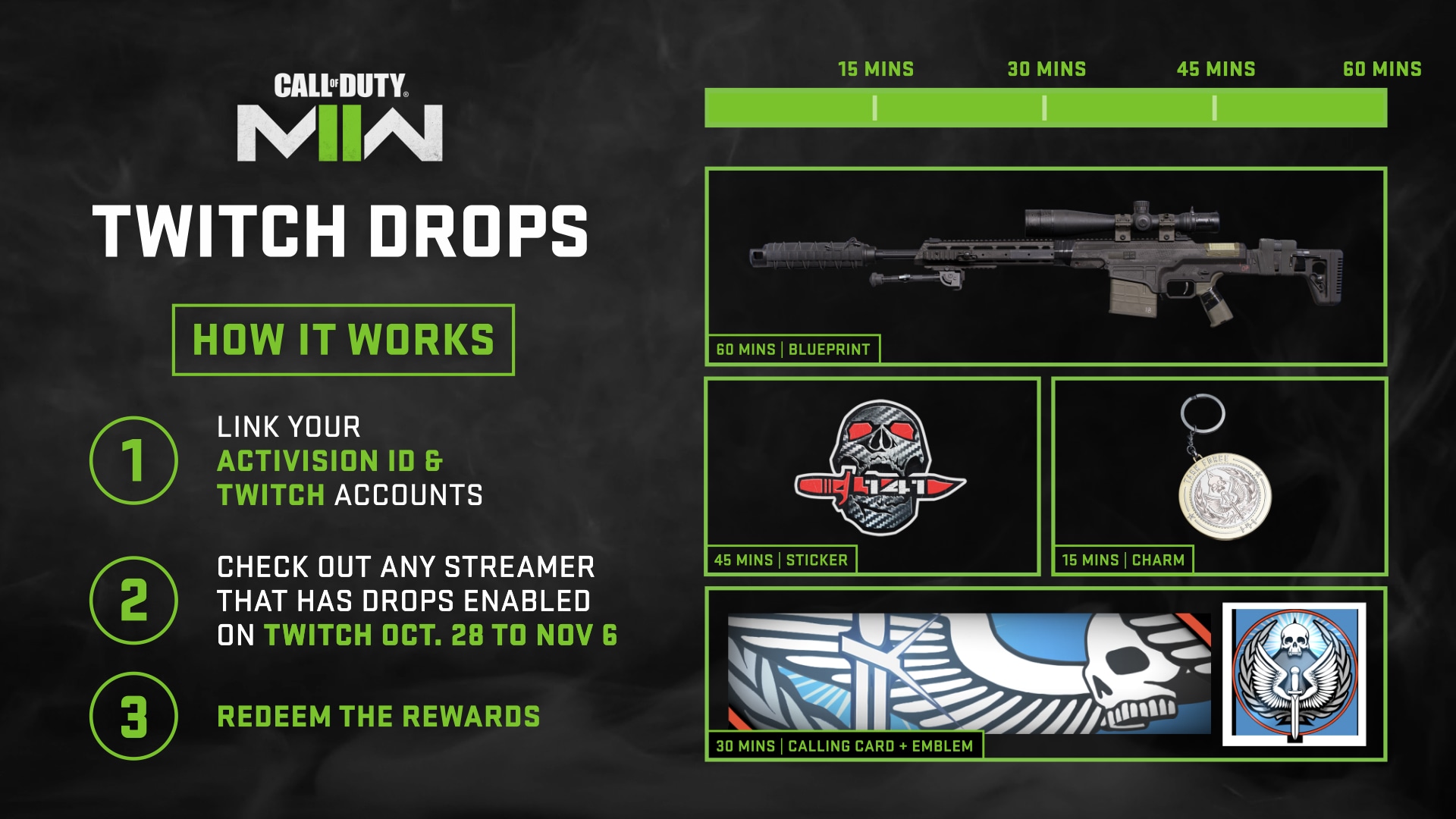 Once you’ve linked your Call of Duty/Activision account to your Twitch Prime account, you can expect the following seven item unlocks as you continue to watch streamers who have these rewards activated:

Something In My Teeth Weapon Sticker: Unlocks at 45 minutes.

Ready to earn these special drops? Then follow these three easy steps:

Twitch: Call of Duty: Next Viewership Rewards — How to Earn

3. Earn Rewards: Watch any of your favourite Call of Duty streamers playing Modern Warfare II that have Drops enabled. Be sure you’re signed in with a linked account to earn rewards.

The Call of Duty Shop is reloaded with Task Force 141 gear, including an anime-inspired hoodie and dozens of other outfits for the whole squad.

Head to the Shop now and ready up for launch. 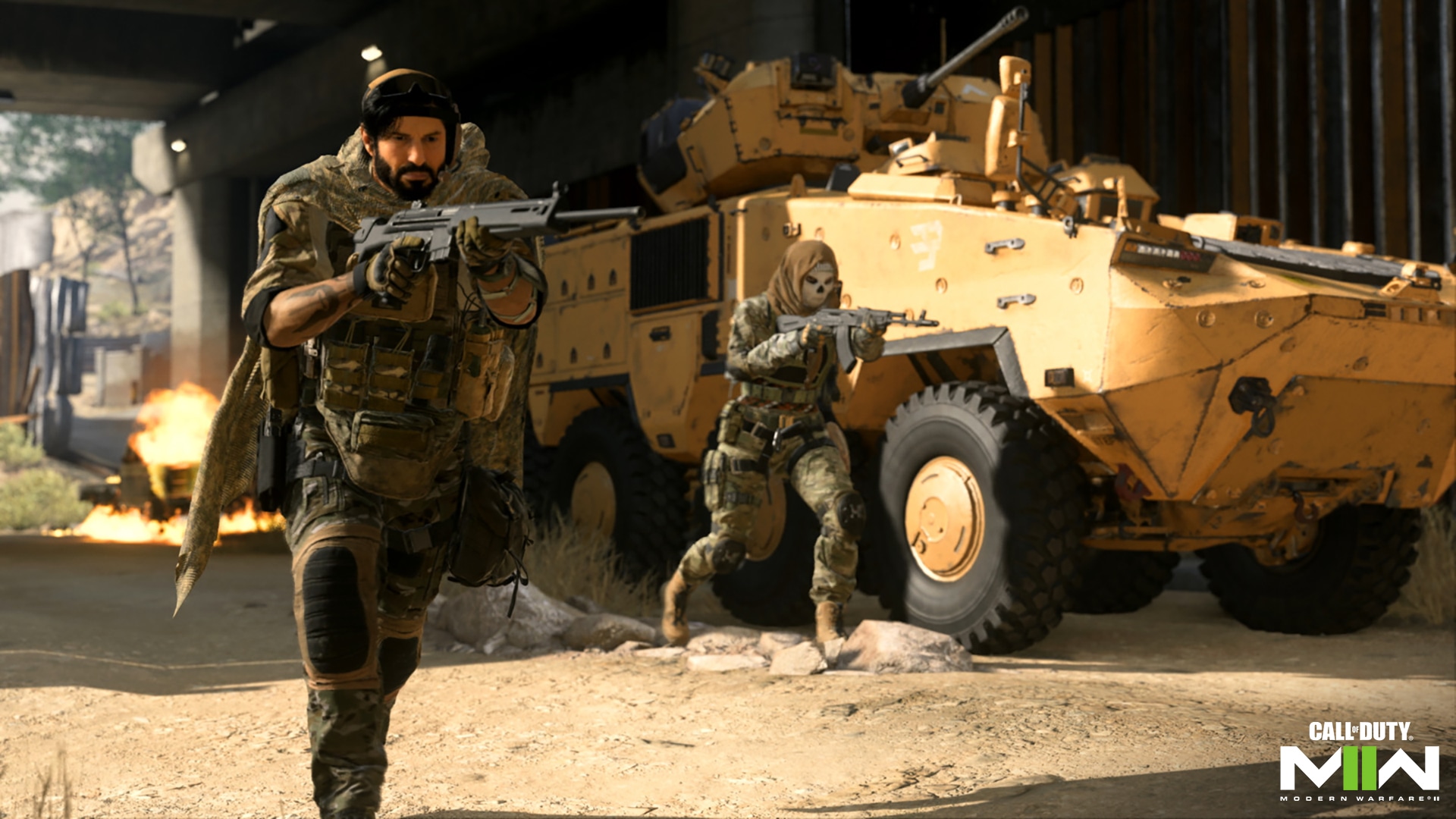 As this exciting year of Modern Warfare II kicks off with Campaign Early Access on October 20, do not be left behind with this transition to the new era of Call of Duty.

Square Enix has announced the cancellation of the NieR Theatrical Orchestra's upcoming Tokyo performances due to the Covid-19 virus. They were origina...

During DC FanDome 2021, DC Comics confirmed that a Milestone animated movie is in the works. It will feature an ensemble of iconic black DC Comics ...

PlayerUnknown's Battlegrounds on mobile is now available worldwide. After less than a week going on a trial run in North America following months of l...