In Flying Wild Hogs’ latest action game, the devs have traded ninja stars and katanas for cowboy rifles, shotguns, and giant mechanized fists. They’ve also switched from first-person to third-person, most likely mimicking the formula some action games are using these days where the camera is showing two-thirds of the protagonist ala your Batman Arkham titles to the 2018 God of War.

Does the change work in favour of more visceral and in-your-face action where you slaughter the undead, vampires, and bandits indiscriminately as a lawbringer with all the tools? Strap yourself in, partner, because it’s about to get messy. We’re talking 2010s Xbox 360 action game-era filth!

A Fistful Of Dollars 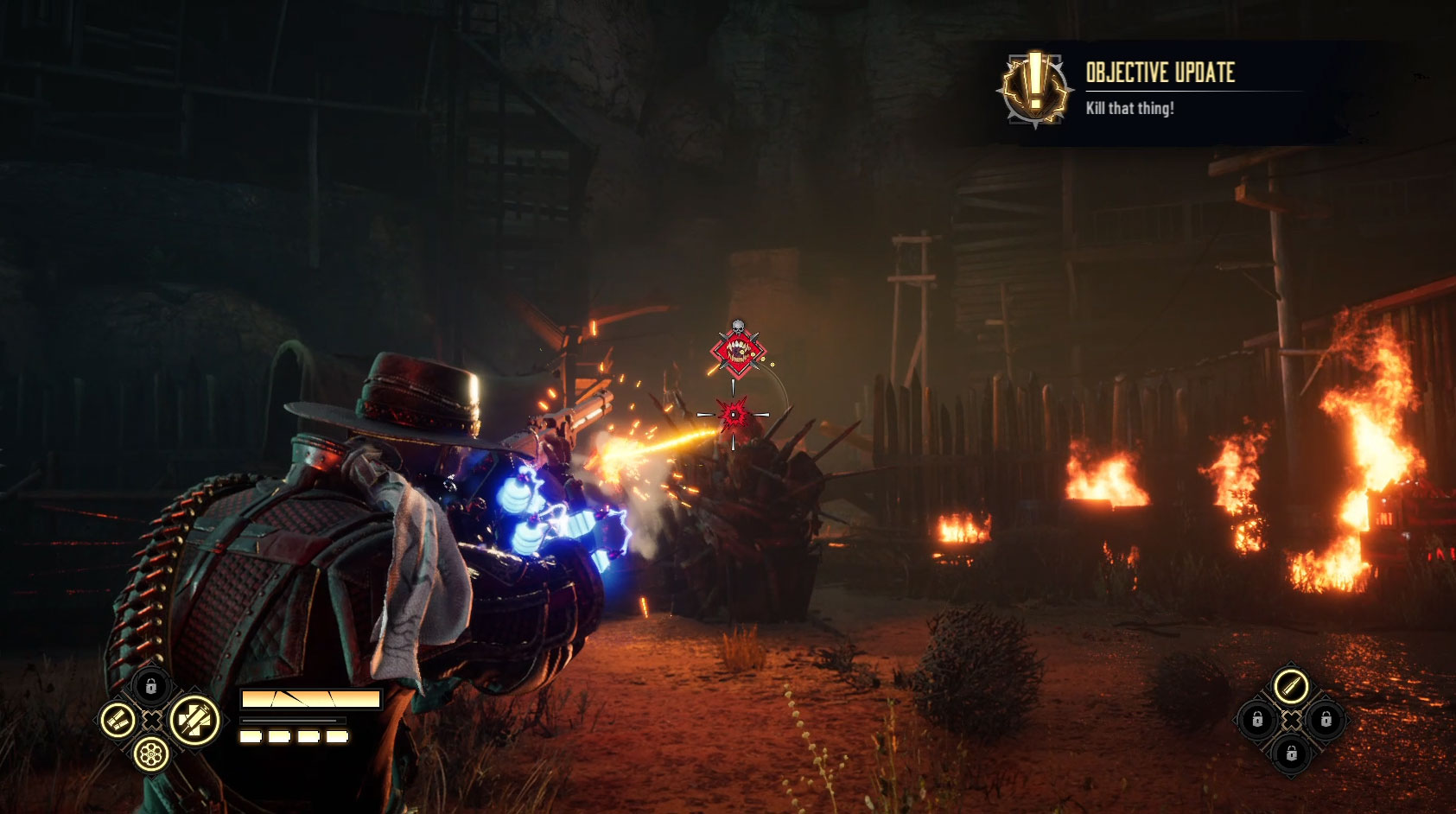 You play as agent Jesse Rentier, who is tasked with dealing with vampires (called Ticks) in an alternate version of 19th century USA where vampires and familiars are a real thing and steampunk tech rules the roost. Jesse is straight-laced, is about as charming as a slab of beef, and gets the killing job done. The plot is there to show that (a) Flying Wild Hogs really wanted to do a Wild West story with a supernatural twist and (b) they just want players to control a badass cowboy with all the tools needed for maiming and in third-person fashion.

Thankfully, the latter is all we care about. The pretty standard plot with your exposition-spouting characters -from the nebbish scientists and engineers to the cranky government admin fellow- are just leading you to the game’s standard locales. Or rather, fight arenas as we call them in the action gaming realm. Evil West is 90% combat and 10% puzzle-solving, and by golly the combat feels fun and good.

Jesse fights with a combination of ranged arms and melee combat. He can fire fast revolver shots, pull off a powerful shotgun blast, aim with his rifle and deal critical damage whenever a circle pops up (usually when a baddie winds up for an attack), and use his right arm to deal a load of heavy-hitting punches and combos. He can even uppercut enemies into the air, making them ripe for juggling with either your metal fist or your guns. Once he gets through parts of the story, he can also use his electric powers from his fists to either dash to enemies and stun them, or drag them to him and also stun them. He also has an electric ground pound, and also an electric guard move that’s basically a parry but with a ton more active frames because the game wants you to feel like a multi-tool badass agent with a license to kill. In fact, that’s a lot of moves for Jesse that you’ll be overwhelmed at what to use, perhaps even forgetting some moves while you’re going through the 10-hour story campaign.

Yes, the game has some exploration bits, but they’re pretty minor. Solve a puzzle to traverse from point A to B, move a mine trolley there, ride a mine cart and shoot down obstacles before you collide into them, and opening up secret spots for loot, info dumps, and cash to upgrade Jesse’s weaponry. But really, the meat of the game really entertains; Jesse’s controls and movement is fast and fluid, his evades and dodge rolls are generous with its invincibility, and like I said earlier: tons of weaponry and tools to fight off enemies in style and in quick fashion.

The bad guys come in droves and can overwhelm you, but Evil West’s spot-on controls, meaty combat, and plethora of options are more than enough for you to take them on. If you die, it’s usually your fault.

How The West Was Fun

Only a good chunk of negatives stand in the way of this Western frontier. The level design isn’t that inventive and encouraging. The vistas can be pretty, but the actual levels just feel like it’s cobbled on just for the sake of arenas for Jesse to fight in. And later in the game, some fights do feel like they’re repeating themselves. It’s not a dealbreaker, but it becomes very apparent when you’re fighting the same giant flying vampire bat and shield-bearing goon more often than usual. Enemy variety is clearly lacking here.

Still, don’t count out Evil West if you want your action gaming jollies satiated. Flying Wild Hogs did well here with the Wild West take. Evil West’s flexible combat, challenging fights, and cowboys-versus-vampires setting are enough for me, and probably for you if you need more action games on your PC and console. It does remind me of the old days of 2010s third-person action games, but the good parts. 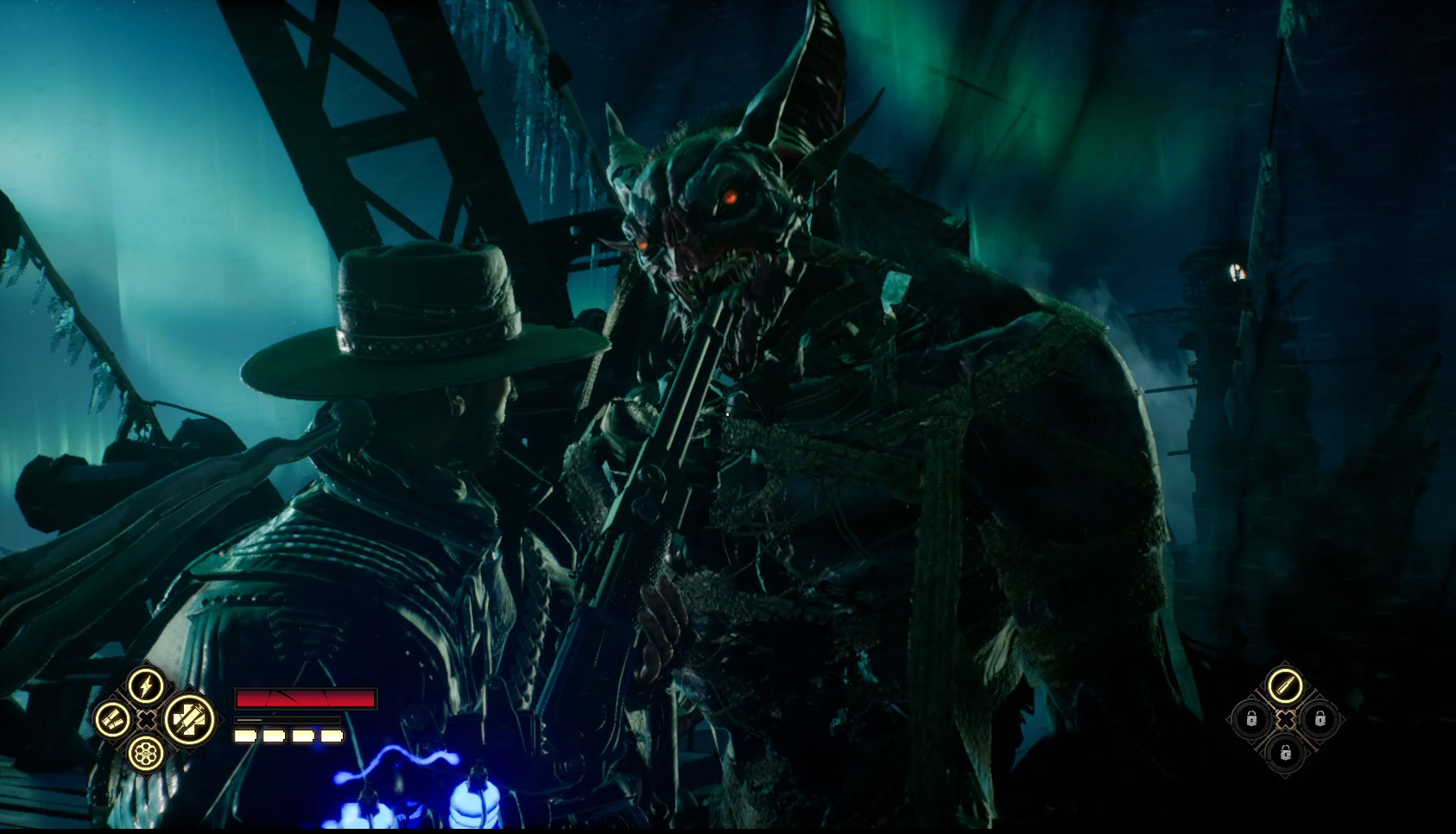 Who knew Capcom and Netflix would go out of their way to publish a movie that looks like an authentic PlayStation 2 CGI cutscene compilation for 2021?...

Reviews
Kingdom: Ashin of the North Is A Perfect Entry into the Kingdom Franchise

For a standalone episode that comes at the back of two highly successful seasons, Kingdom: Ashin of the North is surprisingly a perfect entry point fo...