Blocks can be dated back all the way to the dawn of video games with classics like Super Mario with its 8-bit art and obviously how can we forget the iconic Question Mark block? If we think about modern times then obviously Minecraft comes to mind as its crafty cubes make up one of the most successful video games of all time.

And it looks like Togges plans to be the next big block game. 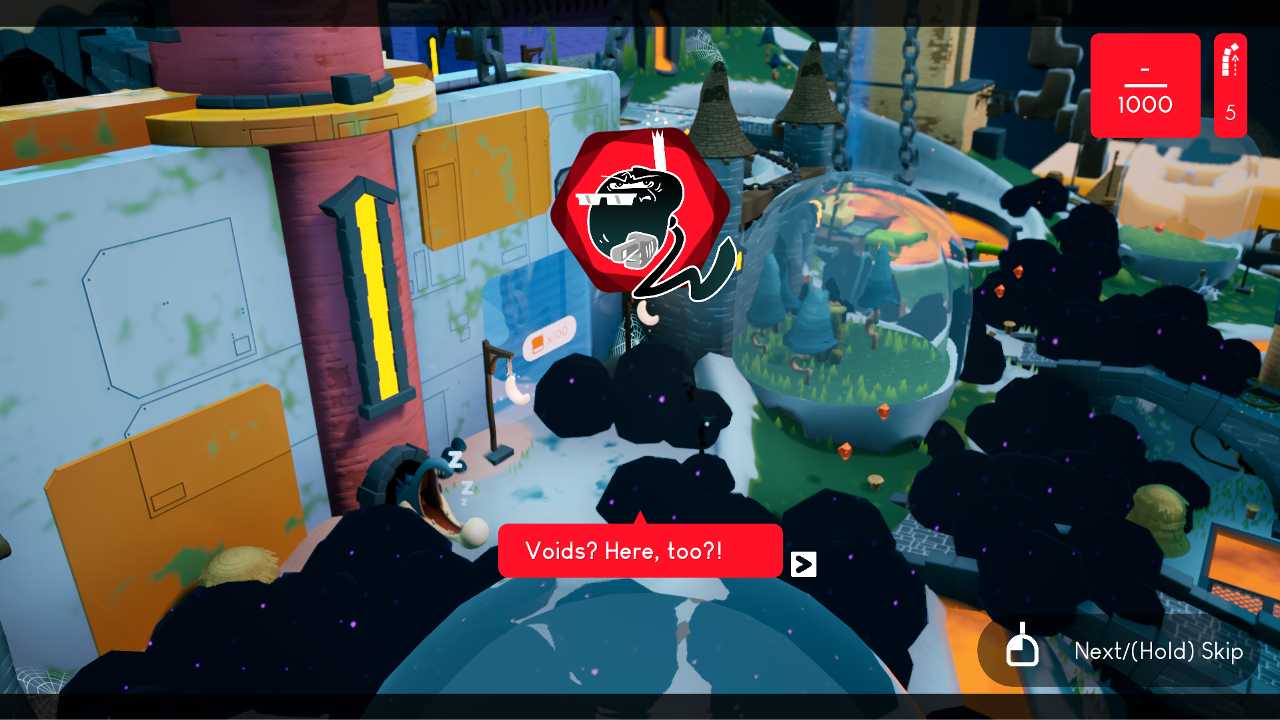 In each level, you start with 1,000 Togges and are tasked with exploring the open areas and placing the boxes on anything suspicious to try and find collectables. What makes this slightly tricky is that Togges can only be placed next to each other or one space apart so you need to make an extensive line of them to get anywhere.

Developed in Unreal Engine 4, the game’s overall aesthetic is extremely pleasing to the eye with its vibrant colours contrasting phenomenally and the cuteness of everything in general. Words can’t really describe just how attractive the graphics are until you play it for yourself.

You can spawn Togges through permanent Togges of the same colour or you can build Togges on top of fruit to turn them into Star Fruit. From Star Fruit, you can spawn any colour of Togges so it acts as a checkpoint of sorts. With that said, there are six colours of Togges, each with its own properties and costs. You have the standard Red Togges, which cost only one to place and can only stack up to five Togges high.

Then you have the Blue Togges, probably the least used in the early game. With the Blue Togges, you can place them underwater regardless of depth, as you can assume, you can’t do that with the others. Next, you have the Yellow Togges, these cost two to place and act very much like the Red Togges except they can stack up to five high.

Then you have my favourite: the Green Togges. These hefty boys are massive 3×3 blocks that cost significantly more to place but are so much more worth it in the long run. The Green Togges essentially allow for previously unavailable routes for the player to take as they can act as a platform to place other colours. Next, you have the Black Togges, these are indestructible Togges that can’t be cleaned up normally.

To retrieve them, you either have to vacuum a Star Fruit to recall your non-permanent Togges, or you can use an eraser. And lastly, we have the White Togges. The White Togges can be stacked infinitely, but the catch is that you have to be quick as they disappear after a few seconds. One neat feature is that you’re able to spawn any colour of Togges from the white one but not vice versa. 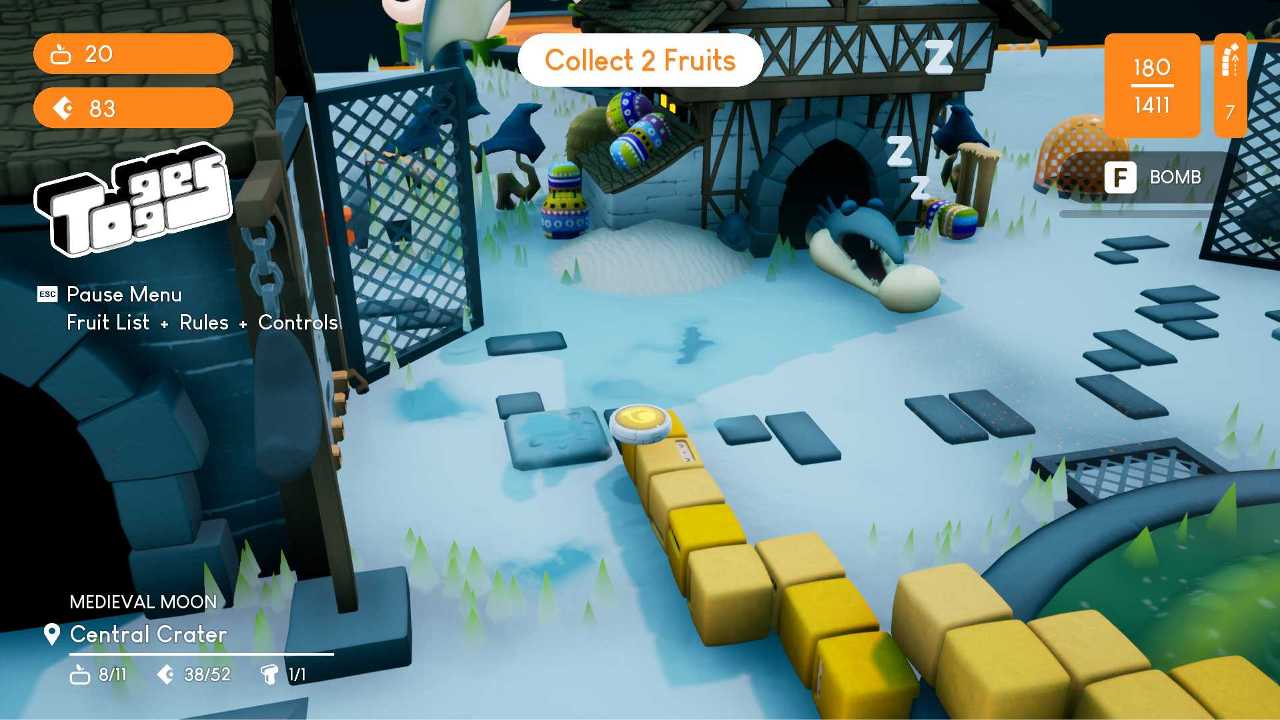 This brings me to my next point: having such a wide variety of Togges that synergise extremely well together, means that when solving puzzles or exploring levels, there’s no right way. Say you want to get to a Fruit, and you see there’s a clear path towards it. You don’t necessarily have to take that path giving you the freedom to play the game however you please.

With that said, I do feel that it’s a double-edged sword because this freedom means that there is not much direction or instruction with no obvious goal.

When you load up into a new world, all you know is that are puzzle areas that need to be solved and fruits that need to be collected. Where they are and how to get to them is for you to find out and with that, I can’t help but feel that the overarching plot of the game lacks substance. When you’re doing these things, all you know is that you’re doing these things to try and get to the next world. Although you know you’re progressing, you don’t feel like you are. But with this I still found myself coming back to replay levels to make sure that I didn’t miss anything.

There’s also a wide range of different puzzles to solve, whether it be using pressure plates, or finding Letters. I never got bored of the puzzles as it was always something new. Even if a puzzle seemed similar to another, and I knew how to do it, there was always a twist which kept me engaged.

My biggest gripe with the game is the dialogue. There’s just TOO MUCH. I’m sure that using all the dialogue featured in the game could produce a pretty hefty novel that perfectly explains the game’s overall story. Not to discredit the devs, as it’s blatant just how much work they put into the storytelling through the sheer volume and detail of the dialogue but there is seriously too much. Although there’s an option to skip, during my playthrough, I was hesitant to do so as I was afraid I would miss key pieces of dialogue.

In addition to this, although the dialogue added to the story-telling, I felt that with the sheer amount of it, it really didn’t add much to the world-building side besides character development with the King President. Straight off the bat, you can tell what kind of archetype he’s meant to fall into, the ‘goofy, fun-loving King’. Yes, you get to know him bit by bit as his character is meant to be charismatic but his dialogue doesn’t really change too much and he remains as the ‘goofy, fun-loving King’ throughout and this repetition began to bore me in my playthrough.

Togges is a 3D platformer with a focus on exploration but lacks real instruction and direction. Although you’re free to do as you please, you just don’t know where to start.

That’s not to say it’s a bad game, not at all. The puzzles a probably the best part of the game, never too hard and never too easy but always intuitive. Furthermore, the overall aesthetic of the game is extremely attractive and you can’t help but feel comfy when playing it.

With the pros versing the cons, I feel that Togges is perfectly suited for the Game Pass and definitely give it a shot if you have the chance.

News
Check Out All The Cool Stuff At PSX 2018 Bangkok, Thailand

Last weekend, PlayStation fans were in for a treat. At least the ones in Bangkok, Thailand, and the ones who managed to fly down there on time. The Pl...

Improbable and Epic Games have announced a $25 million fund to help move developers to "more open engines," in response to the news that the license f...