In the spirit of togetherness and to mark the launch of Netflix’s 2023 Lunar New Year collection, Malaysian paper-cutting artist Eten Teo has created an intricate piece highlighting a family’s Chinese New Year celebrations.

Teo’s papercut piece marks the first time a physical artwork is digitised to be featured on a local moment on Netflix — a specially-curated collection of titles that celebrates seasonal moments or social events that are important to local audiences. In addition to Malaysia, Teo’s artwork will also be spotlighted on the Netflix platform in Singapore, Taiwan, Hong Kong, and Vietnam.

Spot the children writing couplets while watching their favourite show on Netflix, mum trying to balance her tray as she tries to stop the lion kitty from lunging at the TV, and more familiar CNY celebration scenes in the artwork. 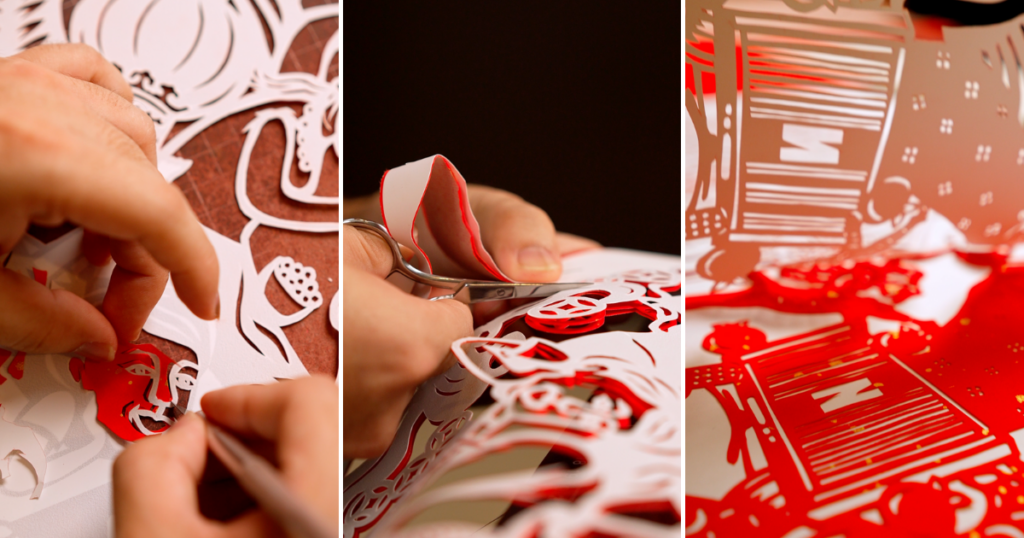 The piece, which took Teo a week to complete, revolves around the word ? (fú, meaning “fortune” or “good luck”) and is meant to represent the blessings and happiness surrounding the festivities. He also put some of his fondest memories onto paper with his latest work, as some of the scenes are directly inspired by his personal childhood experiences celebrating Chinese New Year with his family.

“Every CNY, the adults at home will be busy with the required preparations, and children will write couplets to decorate the home. As a child, I was the one helping to decorate and arrange the decorations. Although my family can be a bit chaotic, it is actually a very warm scene. Getting together for the new year is a very happy occasion for me,” he said.

Teo also considers the piece as a milestone in his craft, as it is “different from (his) previous style of work”. Further elaborating on his process, he said, “It is not the most neat and perfect in terms of technical aspects, but it shows the different movements and expressions of each character. When it’s placed in the context of paper-cutting art, it’s a relatively new art style.”

Curious to see how the delicate piece came together? Check out this behind-the-scenes look at how the paper-cutting sifu created his highly-detailed artwork on Instagram, TikTok, Facebook, and Twitter.

Teo’s creation serves as the centrepiece for Netflix’s 2023 Lunar New Year slate, which showcases a curated and diverse collection of classic and new titles to the theme of A Time for Togetherness. From laugh-out-loud comedies and heartwarming family fare to action-packed blockbusters and award-winning hits, there is sure to be something for everyone.

You can head over to www.netflix.com/888 for the collection of CNY classics and fan-favourite blockbusters.

Joseph Chang — who was nominated for Best Actor in the recent Golden Horse Awards for his role in this film — plays Liu Li-min, a floundering media personality who finds himself taken hostage by Chang Cheng-yi (Edward Chen), a former rising sports star who was jailed for murdering his girlfriend seven years ago, to escape from prison.

As public attention on Chang’s case continues to heighten, Liu takes advantage of his 15 minutes of fame to re-investigate the case, once again thrusting him into the spotlight. However, the deeper he goes into the rabbit hole, Liu soon discovers more dark secrets surrounding the case that may also involve those closest to him.

The Post-Truth World is set to premiere on 21 January.

A passion project for Louis Koo, who stars in and is an executive producer for the movie, Warriors of Future is a rare foray into the sci-fi genre and sets a new benchmark for Hong Kong cinema with its cutting-edge special effects.

The post-apocalyptic blockbuster, which also stars Sean Lau and Carina Lau, pits man against nature when a meteorite carrying a destructive plant crashes down on an already-barren Earth. To protect their city, an elite suicide squad is deployed to destroy the plant… only to uncover a bigger conspiracy.

Colourful and quirky, Wish Dragon is a charming and feel-good pick that will delight both the young and old.

The animated feature follows Din, a working-class college student with big dreams but small means, and Long, a cynical but all-powerful dragon capable of granting wishes, who set off on a hilarious adventure through modern-day Shanghai in pursuit of Din’s long-lost childhood friend, Lina. Their journey forces them to answer some of life’s biggest questions — because when you can wish for anything, you have to decide what really matters.

A human-bunny team-up for the Year of the Rabbit? We love to see it!

A resourceful and ambitious Fei Fei (voiced by Cathy Ang) takes her pet rabbit Bungee on a ride to space when she builds a rocket to the moon, where she ends up on an unexpected quest and discovers a whimsical land of fantastical creatures. Directed by animation legend Glen Keane in his feature directorial debut, the Oscar-nominated musical adventure also stars the voices of Phillipa Soo, Ken Jeong, John Cho, Ruthie Ann Miles, Margaret Cho, and Sandra Oh.

Fantasy romance series Love Between Fairy and Devil is inarguably the buzziest C-drama of 2022, with all the makings of a drama lover’s dream — forbidden romance and body swap hijinks with a dash of reincarnation lore.

Based on the novel of the same name, the series centres on a low-ranked fairy (Esther Yu) and a powerful demon (Dylan Wu) whose fates become cosmically entangled when she accidentally frees him from a magical tower that he has been cursed and imprisoned in for thousands of years.

Much praise has been heaped upon the series’ artistic achievements, namely the ethereal landscapes, intricate costumes, and jaw-dropping visual effects. Fans were also mightily impressed with leading lady Esther Yu for displaying incredible range by portraying three characters in the series.

Heartwarming and inspiring, Nice View will likely bring some tears to your eyes.

Directed by Wen Muye, who won two Golden Horse Awards for his feature film debut Dying to Survive in 2018, the comedy-drama follows young cell phone repairman Jing Hao (played by Jackson Yee) who takes part in a risky business venture in hopes of raising funds to pay for his sister’s expensive surgery. However, an unexpected setback leads to little to no way out for Jing Hao and with the clock ticking against his sister’s favour, he decides to take one last desperate gamble to turn things around.

In this refreshing and cheeky take of mother-daughter relationships and life after the loss of a loved one, acclaimed Taiwanese entertainer Billie Wang plays Wang Mei-mei, a 60-something widow who decides to venture into the exciting world of online dating, much to the horror of her two adult daughters, who are both dealing with their own romantic woes.

Plus, here’s a fun fact — the dramedy series is based on the popular Taiwanese novel ‘My Mother’s Exotic Marriage’, which in turn is inspired by a true story!

A CNY watchlist would not be complete without a movie centred around a quintessential festive activity — mahjong!

In this ‘00s classic, Andy Lau stars as a compulsive mahjong player who was disowned by his family for racking up debts due to his gambling habit. In the years since, he’s seemingly enjoying a string of good luck and became rather well off after meeting his girlfriend (Gigi Leung) i.e. his good luck charm. Seeing a chance to win back his family’s trust, he offers to take care of his financially-strapped brother (Louis Koo) and ageing mother. Little did he know, trouble brews ahead when his brother gets involved with a devious mahjong player (Sean Lau).

Sony has deactivated the user's abilities to redeem pre-paid PlayStation Plus cards to prevent subscription stacking. This is allegedly because PS Plu...

The Ni no Kuni movie recently debuted in Japanese cinemas on 23 August 2019 and immediately bombed to seventh place of the Japanese weekend box office...

Dragon Ball FighterZ's latest DLC character will be out soon. Bandai Namco and Arc System Works announced that Android 21 (Lab Coat) will be out on...