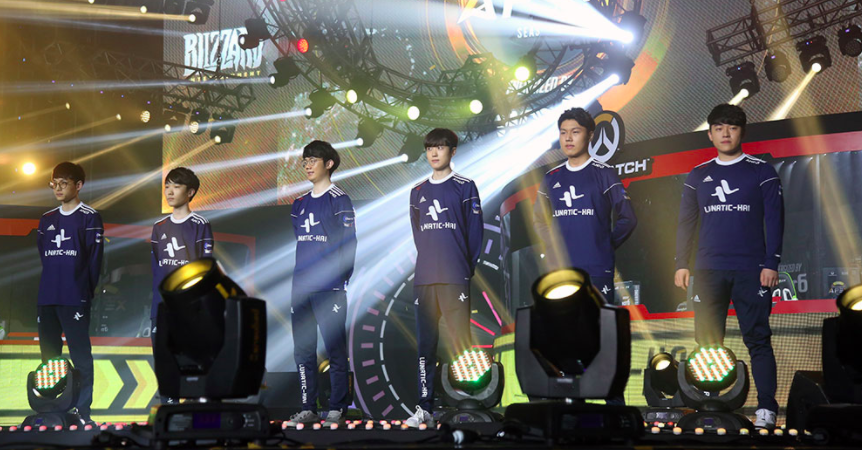 So as we head towards the final days of 2017 and with the upcoming Overwatch League pre-season just around the corner, we look back at what a year it has been for the Overwatch community – burgeoning scene especially in the South Korean OGN APEX scene with the emergence of GC Busan dethroning the old guards, EnVyUs boosting their team on and off screen with the acquisition of Seagull and xQc, an exhilarating second Overwatch World Cup and of course, the official launch of the Overwatch League.Â  Many would argue that they’ve seen the best Overwatch match when South Korea defeated the United States but we have to disagree. These folks probably missed out on the Grand Finals of OGN APEX Season 3 where Lunatic-Hai squared off against KongDoo Panthera. Today, we are going to recap the epic battle which in our point of view, is THE BEST Overwatch set we’ve witnessed in 2017.

In a calm, breezy Seoul evening, two of the best Overwatch teams in the world converged at the base of the Lotte Tower in Seoul for the Grand Finals of APEX Season 3. Veteran team and reigning champions Lunatic-Hai, comprising of three South Korean players at the 2017 World Cup Qualifiers â€“ â€œAna Godâ€ Ryujehong, Kim â€œzunbaâ€ Joon Hyuk, and Yang â€œtobiâ€Â Jin-moÂ are the favorites going against the not-so-surprised-package and challengers to the throne, the boys of KongDoo Panthera.

The Grand Finals isnâ€™t the first time both teams faced each other this year. In fact, itâ€™s their third bout at APEX Season 3. Placed in the same group for the first round of group stages, Lunatic-Hai won 3-2 during their first encounter, an impressive feat considering it came by recovering from being down 0-2. But the â€œSailorboysâ€, as KongDoo Panthera are known for thanks to their seamen-inspired outfits for Season 3, hit back in their second meet after again being placed in the same group as Lunatic-Hai in the second stage group. After losing the first map, Panthera pulled a reverse sweep to win the series 3-1 to even the score 1-1 and the rivalry, set.

And as if it was written in the stars, or perhaps Jeff Kaplanâ€™s diary, both teams met again for the third time in APEX Season 3 on the grandest stage of all: in the Grand Finals. But their route to the Grand Finals could not be any more different. Having won both of their first two group games in Group Stage #2, KongDoo were surprise winners of their group. By beating Lunatic-Hai 3-1 in the aforementioned second meet, followed with a convincing win against LW Blue, they secured a spot in the playoffs against the sole remaining western team in the tournament, APEX Season 1 winners and fan favourites, EnvyUs who finished second in the other group.

As for Lunatic-Hai, the reigning championsâ€™ Group Stage #2 opening loss to KongDoo was like a slap to their faces as they now face instant elimination in every remaining match that they play at APEX S3. The need to beat both CONBOX Spirit and LW Blue to secure a spot in the playoffs and they did in confident fashion, earning consecutive 3-1 and 3-0 wins to regain their confidence and reignite their bid to be the first ever two-time and returning APEX champions.

Road To The Big Stage

En-route to the Grand Finals, KongDoo Panthera had APEX S1 Champions EnvyUs standing in their way. A fan favourite, due to their large following as well as their constant clutch plays and insane team chemistry, their presence and threat were somewhat tripled by the recent addition of the superb Kim â€œEffectâ€ HyeonÂ playing as Tracer along with Mickie who mainly operate as D.Va into their roster. It could have easily been the end of KongDoo Pantheraâ€™s brilliant APEX S3 campaign but they showed their chops with an emphatic 4-0 win that sent everyone in the Overwatch community on full alert.

Beating Lunatic-Hai was probably a one-off fluke, but 4-0-ing EnvyUs? That was never really on the cards. Having won Major League Gaming Vegas 2016 last December, EnvyUs were seen by many as the best team in the West, and possibly the best bet to dethrone Lunatic-Hai. Even in lead up to the match, EnvyUsâ€™ DPS star Taimou foolishly labeled Panthera as â€˜The Easiest Teamâ€™ â€“ something he would instantly regret as his team were sent packing home early by Rascal & crew. People started to take notice.

On the other side of the draw, Lunatic-Hai who were facing elimination a few weeks earlier found AF Blue standing between them and the Grand Finals as well as a shot at retaining their reign as OGN Overwatch APEX Season 3 champions. And AF Blue were no easy meat as they had ArHan and TaiRong â€“ both who were part of 2016 World Cup-winning South Korea team along with Mano, who joins this yearâ€™s Korean squad within their ranks.

The matchup between Lunatic-Hai and AF Blue was akin to a mini reunion for the Korean Overwatch World Cup squad as Lunatic-Hai boasted the likes of â€˜Ana God Ryujehong, zunba, Miro, EscA, tobi â€“ all who were either current or former national team players. A little trivia by the shoutcasters was also an interesting one, the fact that Lunatic-Hai played over double the total playtime compared to AF Blue leading up to their meet.

The backstory was set â€“ an All-Star Battle of South Korean World Cup alumni and present players, reigning champions fighting for their survival with pretenders to their throne standing in their way. The Lunatic-Hai everyone knew woke up, AF Blue had no answer and the team who planted the seeds of doubt, KongDoo Panthera, await.

The See-Saw Battle Of The Ages Part 1: What Started In Egypt Ends Up In China

Playing in front of the largest crowd ever, nerves were expected of the seemingly young and relatively inexperienced KongDoo Panthera team but any doubts were eviscerated as Birdring outplayed Gido on Tracer, leading to a convincing 2-0 win on Lunatic-Haiâ€™s favored Nepal. Not to be outdone, the reigning champions rallied back with a very strong final point hold to win the second map on Eichenwalde 3-2. With over two minutes remaining with the payload a few metres away from the final point, Lunatic-Haiâ€™s decisive kills ensured that they came out tops in the battle of attrition to tie the score 1-1.

Little to everyoneâ€™s knowledge, the tone for the night has been set. KongDoo Panthera showed better discipline and Ultimate economy by faring better on control maps, while Lunatic-Hai who have mechanically superior offensive and support players perform better when it involves escorting and defending points. But what about pure assault maps? Boy,Â were we in for a treat on what was coming next.

While viewers at home watching on stream were pumped following non-stop, extended Overwatch action, viewers at the venue were somewhat hoping for a quick end to the set of matches as the event which was held under the night sky was threatened by potential rain on the horizon.

Sorry folks. The players didnâ€™t care as the â€˜Battle of Anubisâ€™, as I like to call it, happened. In their bids to gain the lead on aggregate, both teams didnâ€™t give in one single bit which saw both teams attacking the map three times resulting in two full captures for both sides capped with a stalled hold on the third. In a textbook example of a snowball capture, Lunatic-Hai, with just one minute in the time pool, managed to capture both points in their first overtime round.

Not to be outdone, KongDoo Panthera matched their rivals by the rounds, tying the map scores at 4-4 before being denied any capture on the second overtime round forcing a tie-decider match on Lijiang Tower; a single control map to decide who wins the round.

Following over 30 minutes of battle on Anubis which saw both teams on even ground, Rascalâ€™s heroics on Genji with the Dragon Blade denied Lunatic-Haiâ€™s last desperate push on Lijiang, ensuring that KongDoo Panthera walk away with the win and a 2-1 overall lead and a step closer to dethroning the fan favorites.

Two control maps, and two wins for KongDoo Panthera. What comes next will shock you.

Stay tuned for Part 2 of the recap which sees Lunatic-Hai cementing their position as the legendary Korean Overwatch team.

The Last Of Us Part 2 Will Make You Sad & Angry, While Also Being A Superior Sequel

by OGN Overwatch APEX Will Not Get A Fifth Season – KAKUCHOPUREI.COM in January 7, 2018
Reply

[…] OGN APEX has brought us brilliant matches and what better way to represent the quality of the circuit with our 2017 Overwatch Match Series of the Year, Lunatic-Hai vs KongDoo Panthera which we discussed here. […]

by OGN Overwatch APEX Will Not Get A Fifth Season – KAKUCHOPUREI.COM in January 7, 2018
Reply

[…] OGN APEX has brought us brilliant matches and what better way to represent the quality of the circuit with our 2017 Overwatch Match Series of the Year, Lunatic-Hai vs KongDoo Panthera which we discussed here. […]