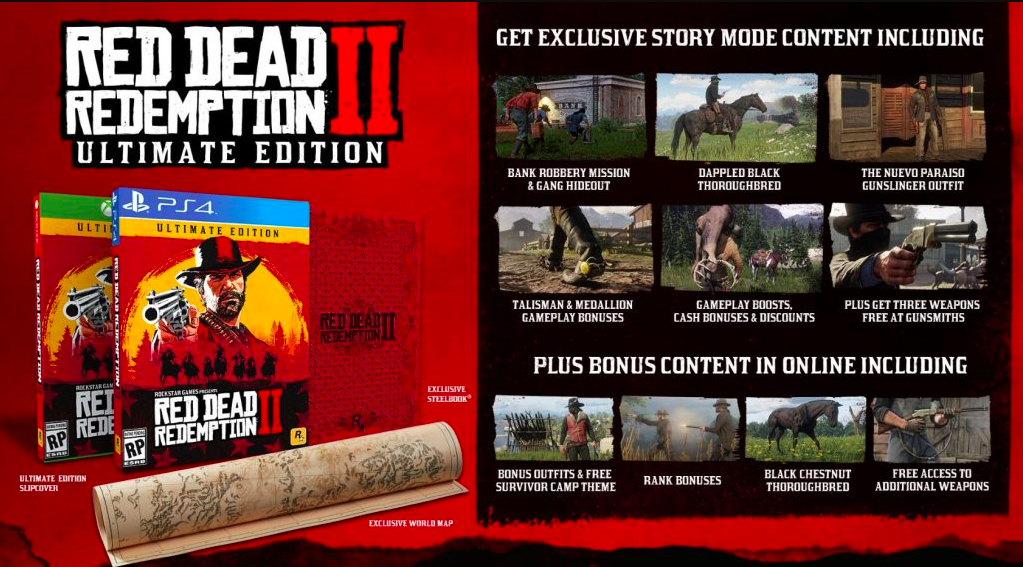 We finally get an early look of what Red Dead Redemption 2’s special editions are going to be like. Revealed earlier today, there will be three different versions to choose from, with the costliest of the three not having a copy of the game included.

The first and cheapest of the three, the ‘Special Edition’ is basically the standard game with extra downloadable content including additional missions, in-game equipment, outfit, free weapons, gameplay boosts, cash and discounts and a jacked-up horse possibly on steroids. (we kid, we kid). They will also thrown in a physical map of theÂ  game’s world map if you purchase the physical copy of the game. At $79.90, the Special Edition will cost $20 more than the standard version ($59.90).

The second version a.k.a ‘the one they expect you to buy’ is called the ‘Ultimate Edition’ which lumps in the same DLCs and the physical world map mentioned earlier, along with several extras such as extra outfits, rank bonuses, free access to more weapons and an EVEN MORE jacked-up horse than the one mentioned before. All these extra in-game stuff will cost you another $20.

The third of the lot which also happens to be the most expensive, hardcore-targeted version is RDR2’s own take of the Collector’s Edition called the ‘Collector’s Box’. Considering that there will NOT be any game copy lumped in here, we have a feeling the word ‘Collect’ here refers to its propensity to collect dust.Â  The list of knick-knacks in the Collector’s Box which will set you back $99.90 are listed below and can be pre-ordered at Rockstar Warehouse or any game shop worth its salt near you.

As bonus for those who pre-order the game, Rockstar will add another jacked-up horse to your stable, although not as ripped as the ones mentioned prior.

Set for release on October 26th 2018 for PlayStation 4 and Xbox One, we compiled everything we know so far about the game in one easy to read article here.

Thanks to the guys at Aksiz.comÂ Â for the news heads-up. For your video games news fix in Malay, head on over to the one and only trusted source for Malay gaming content in Malaysia. Them Aksiz.com guys are pretty swell.