Today, as god is my witness, I have seen & played the unthinkable. I have seen a retro game revival that is the complete opposite and bastardization of what a series stands for. I have experienced a betrayal so foul to a franchise that is just as heinous as X-COM turning into a third-person shooter.

In fact, the company who let this happen, the IP holders in question, went from the people who made pachinko Castlevania and survival game Metal Gear to a beast devoid of heart and soul.

I have played Contra Return which has single-handedly proven that the best of intentions are paved on the feces-stained brimstone-laden road of Hell.

I am not exaggerating. Konami and Tencent, two companies who now work well together to combine their crazy levels of avarice, clearly slapped on an F2P action RPG game that looks and mimics the old-school run-and-gun action game.

Imagine you have a stuffed teddy bear, a prized heirloom, and then take out its cotton stuffings and replace it with strands of pubes and corn-laden s***, and then giving it to your loved ones and make them pay piece by piece to make the teddy bear bigger and slightly smell less. That’s the Contra Return experience.

There is no love and no care put into this China-made 2D shooter that is trying to wear the dead husk that used to be the Contra franchise.

I’ll just give a quick summary of what you do in this version of Contra. You pick Lance, one of the guys from the original game. You run from left to right shooting the usual bad guys from the games. You fight a boss or two from the original arcade/NES classic. You even come across new ones like the HP sponge zombies. 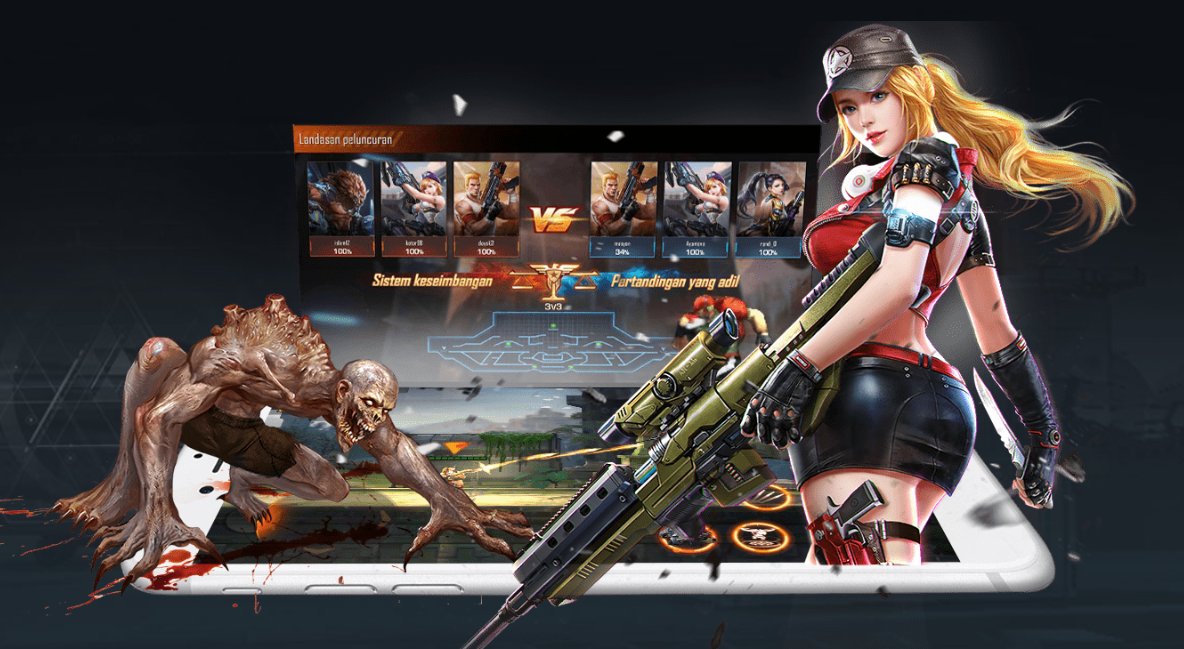 What do you get for your arsenal? You have your rapid fire machine guns, spread gun, flamethrowers, lasers, and so forth. You also have rechargeable special attacks: that’s a red flag considering that your special attacks are your limited-in-supply game changers. You only use them in special and dire situations. Here, you can use them and wait out the cooldown timer. The comparisons between this “Contra” and other F2P action games are so close, I’m still perplexed as to why they’re keeping up with the charade.

Let’s keep counting the ways: rather than have you die in one hit, you have a life bar. That’s fine and all: the JP version of Contra Hard Corp and Hard Corp Uprising gave you one so that it throws a lot of crazy obstacles at you. However, the action here is just a matter of pointing your gun and just holding the attack button until everything is dead.

Yes, you can dodge bullets and enemies, but there’s no challenge here and no situations whatsoever that test your reflexes and your skills in fighting. The levels and the enemy layout mimicks the past games, but doesn’t go beyond and reinvent the wheel. They just repeat themselves to the point of nausea. 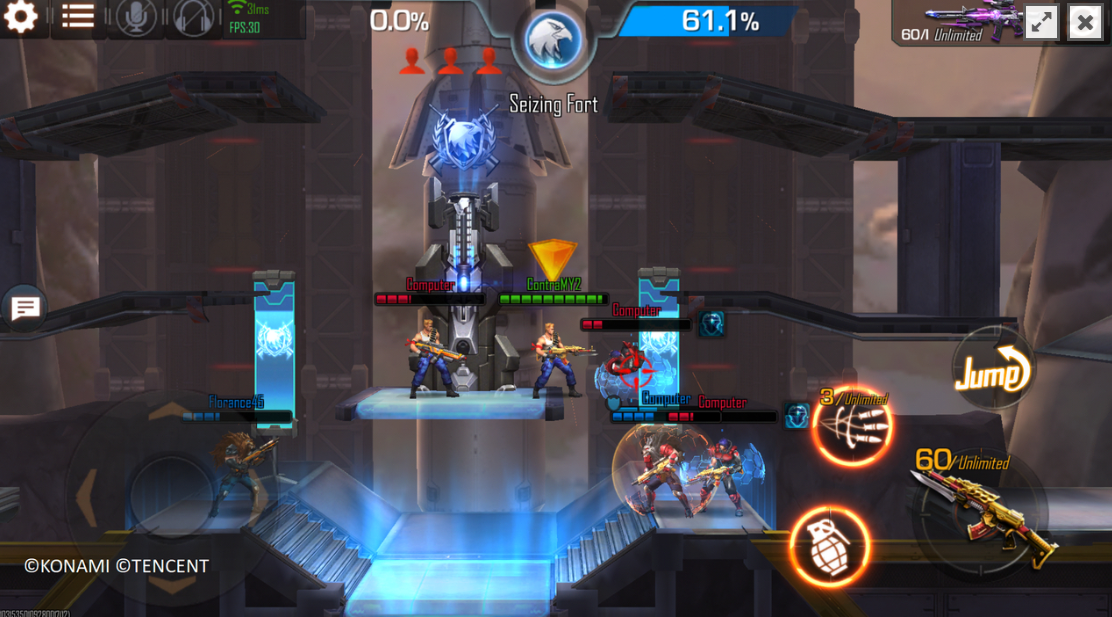 They test your endurance and your patience, sure, but that’s not what a Contra game is about. This Contra game feels like an action RPG using a 2D run-and-gun skin. It’s Contra in name and graphics, but not in spirit and feel.

Contra Returns’ default controls let you auto-aim. Normally I’d say that this defeats the purpose of a Contra game where you need to jump and aim your shots to defeat bad guys coming at you, but the manual controls suck. Contra Returns prove that you cannot use virtual controls on a pixel-precise action run-and-gun game.

There’s going to be lag and a little bit of leeway needed for virtual controls. That’s why Capcom’s ports of Mega Man and Mega Man X do not work on a phone; what makes Konami thinks that a Contra game will?

It’s Time For Revenge (Against The Publishers Who Greenlit This)

To sum up the entire experience: you have a lifebar that lets you take a lot of hits, rechargeable special attacks to keep enemies at bay, and upgradeable guns. Oh,Â and you can auto-aim because the real Contra controls are horrendous in an action game context. 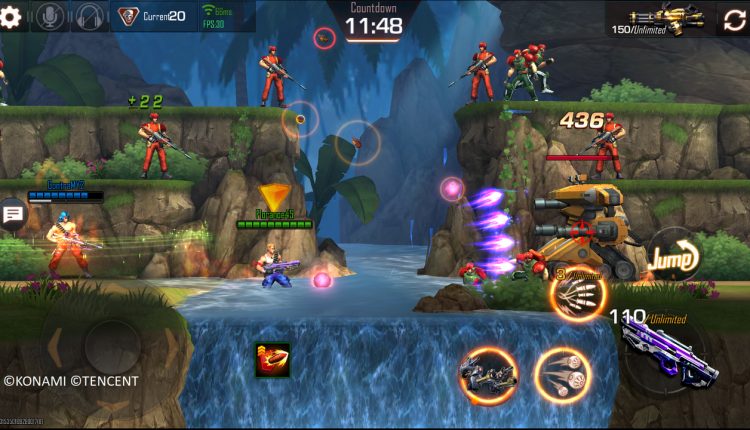 As long as you level up and grind (and some cash for the microtransactions), there’s no obstacle that will keep you at bay. There’s no tension and excitement here; just goddamn rote busywork that sounds and mimicks Contra if it was done by a Chinese company.

Compare this to other Contra remakes and reiterations from WayForward Technologies and Arc System Works. Tencent and Konami should be friggin’ embarrassed that the efforts from those two studios, which are more than a decade old I might add, outshine this garbage fire attempt at a Contra game.

True, if you take out the Contra name and judge it as a standard action RPG game with a 2D run-and-gun mechanic, it’ll be a decent-if-uninspired title. But since it has the name and Konami’s “blessing” on it, all bets are off. Your game will be judged as a Contra title, and it’s safe to say that C: The Contra Adventures (1998) isn’t the worst Contra game in existence.

During one of the many run-and-gun missions against the bullet sponges and brain-dead action that tests your patience rather than your reflexes, my protagonist Bill Rizer halfway quips “Bored yet?”. He says this at times while firing his automatic gun straight at the plethora of gun turrets in a stage dressed up like Stage 1 of the original NES classic.

To which I say “yes”. A thousand times “yes”. If Konami is a human being, it deserves to be waterboarded for whoring out its precious classics like it did with the Metal Gear series. I beseech you to just (i) get a Super Nintendo Mini and play Contra 3/Spirits, (ii) play the old Contra games via emulator or some other way, and (iii) pull out a DS/3DS and play the WayForward Contra 4 game.

Do either one; just don’t download this and give it your attention, time, and money. You deserve better than this. We all do.

-It’s a decent action-RPG game in a 2D presentation for F2P mobile crowd…
-…with lots of game modes meant for the F2P crowd.

-Betrays the spirit of the Contra series in gameplay and design.
-Challenge level is not based on reflexes, only stats and attrition.
-Manual controls are terrible.

Reviews
The Rick And Morty Season 6 Premiere Is Totally Bonkers

Rick And Morty is arguably the most popular it's ever been since it first launched all the way back in 2013; that's almost a decade ago. The franchise...

I walked into the Marvel's Black Panther media preview with tempered expectations, having consciously avoided all the trailers and teasers released to...