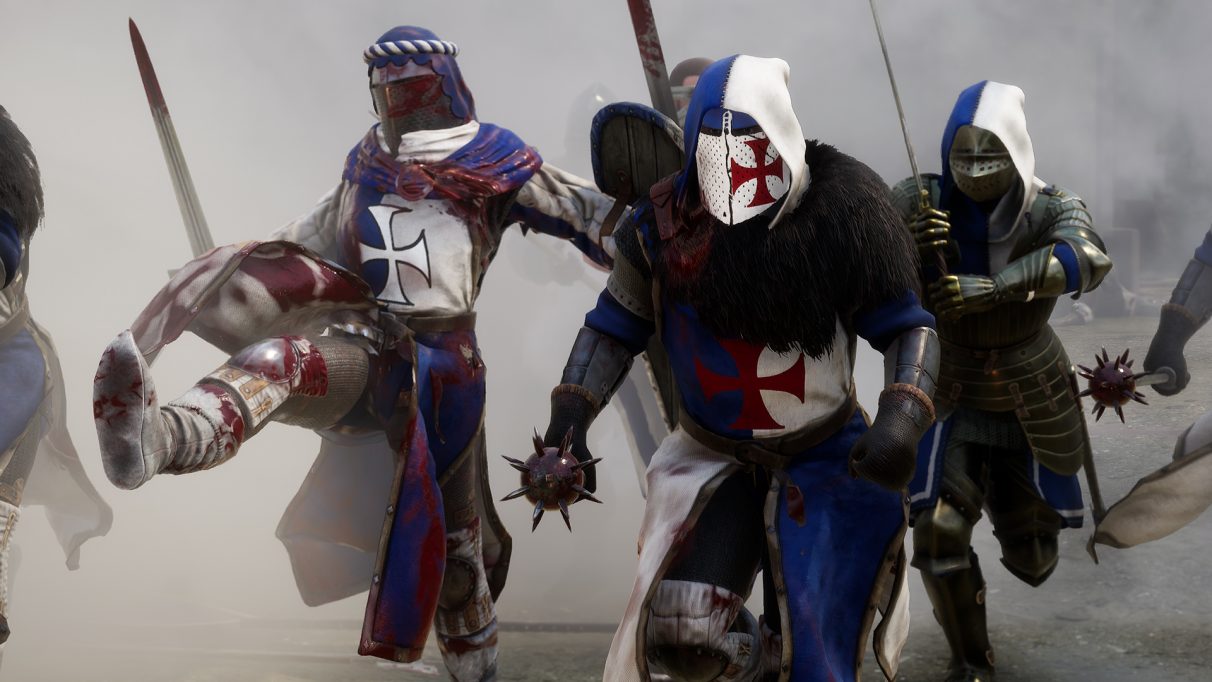 Of course, it’s only natural that you want to come out on top in such a game, or at least not lose as much as you should in a typical online skirmish. Most Mordhau players want to keep things chivalrous: don’t run away from duels, follow “friendly fire” protocols, don’t interrupt duels to steal kills.

In reality, no one should adhere to such dated codes of conduct, especially in multiplayer PC games. We’re going to assume that you’re familiar with Mordhau via its tutorial, so we’ll go straight to the general tips & tricks, clean or otherwise.

Force yourself to chamber

If youâ€™re having trouble winning fights because youâ€™re not yet adept at chambering, then unbind your Parry key so youâ€™re forced to chamber attacks to deflect them. Doing this can condition you to master chambering in a quick fashion. Of course, you’ll die a lot but that’s the drawback of change.

Learn to ride horses well, then counter them

If youâ€™ve come up against a good horseback rider on the Camp map in Frontline, youâ€™ll know why horses are so paramount. In fact, the only time players die on horseback is if they manoeuvre their horses into a bad spot.

Learn to tap “S” to alter your riding speed on the fly. This is so you can manoeuvre through these difficult spots and learn to aim well with a long-reaching weapon.

Some shields allow you to block indefinitely, making them enormously more forgiving than normal weapon-based parries.

This can make it very difficult to deal with shield-abusers â€“ unless you know that all you need to do is bait them into getting close, then kick them. This will usually stun them long enough for you to land a devastating hit on them wherever you like. Rinse and repeat.

Learn to chamber-morph to deal with rapier stab spammers

Over the course of a few days, players have quickly learnt how fast the rapier is at stabbing. So how do you deal with such a “cheap” move?

First, you chamber their stab with a stab of your own. Then, during the wind-up of your counterattack, morph to a side strike instead. Theyâ€™ll be expecting a normal parry chamber, so theyâ€™ll continue to stab to no avail as you chop into them from the side. This works 99% of the time against any stab-abuser.

The key to 1vX situations is positioning, chambering, and target-switching

1vX fights happen a lot in large 32v32 matches, and youâ€™ll die very quickly to them if youâ€™re not prepared. First, donâ€™t ever let them surround you. Second, donâ€™t go purely defensive with constant parries â€“ youâ€™ll quickly die unless you chamber and counter with a more aggressive playstyle. Third, switch targets unpredictably. Chamber one, then use your counter-attack to damage another. If a player thinks theyâ€™ll be attacked at any moment they wonâ€™t be so quick to dive in on an outnumbered enemy.

This is particularly the case if you combine your ability to drag or accel attacks with a weapon that already has deceptive timing to its wind-ups. A dragged Maul or Zweihander attack is so slow that youâ€™re almost guaranteed a devastating hit on any player who hasnâ€™t yet passed the â€œpanic-parryâ€ stage of their Mordhau journey. So yeah. Learn to drag and accel your attacks.

Get used to dying

Easier said than done, I know, but seriously. Mordhau is a game with a very messy player skill curve â€“ by which I mean, no matter how good you are there can be situations where you die to someone much worse than you. Which means no matter how good you get, dying is part of the game, and if you want to play consistently well youâ€™ll have to train yourself not to get tilted when you die three times in a row to the same enemy. Breathe, think, and enjoy the game.

Want to play dirty? Use the spear

This five-foot weapon in Mordhau will make you deal damage while preventing enemies from closing in on you. Much like in For Honor, any weapon that gives you reach and zoning properties is king in a sword-fight. We suggest saving up in-game gold to unlock this asap.

Plus, stabbing enemies with a spear means more damage and instant kills via “headshots”.

As fun as duels are, one well-fought 1v1 battle does not mean victory for your team. If you see any opportunities to get the kill, go for it. If you think your friends need help, don’t be a dick and sort them out.