Who knew that a game where you place Dota “chess pieces” and see an auto-battle can become so friggin’ popular? That’s the case with the recently-in-beta Dota Underlords, Valve’s own take on Auto Chess following that game’s success this year.

Less than 24 hours after launch, the game is now one of the most-played games on the Steam PC gaming platform. It has amassed 115,097 current players and peaked at 202,334 at this point in writing. The game is sitting in fourth place just below Dota 2, PUBG, and Counter-Strike: Global Offensive, while it’s languishing just above Rainbow Six Siege, ARK, Warframe, Grand Theft Auto V, and Valve’s own Team Fortress 2. 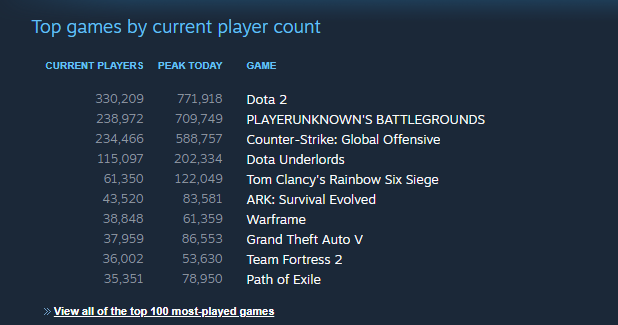 Do expect the game’s numbers to rise beyond just Steam current player tallies, considering that Dota Underlords is also out on mobile and is downloaded more than 100,000 times on Google Play. Valve will have its work count out for them as Riot Games has Teamfight Tactics and Epic Games has the original Auto Chess flavour.

Stick around with us for an upcoming Dota Underlords guide; we’re still playing the heck out of it amidst our busy schedule. If you’d rather play its rival Auto Chess, we have a guide for that too.

Ah, yes, another Souls-like. That's the apathetic reaction I expected to have towards the Mortal Shell's announcement trailer, but its dark fantasy wo...

Riot Games Southeast Asia and ESL Malaysia have announced the League Of Legends Wild Rift and Valorant Merdeka Show. In conjunction with Malaysia's 64...

The last Codemasters GRID racing game was GRID Autosport, which was originally released for the PS3 and Xbox 360 in 2014. Ever since then, the revered...