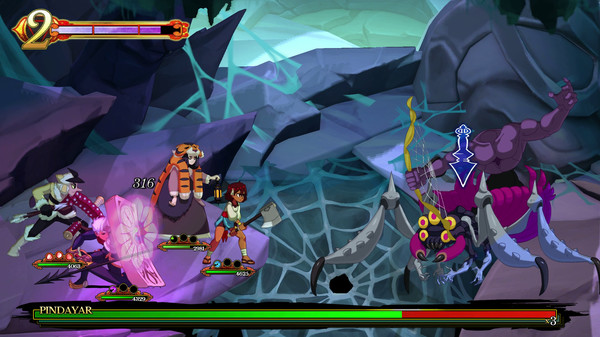 Publisher 505 Games and developer Lab Zero Games have announced the release date for Indivisible. It was originally announced back in 2015 along with a crowdfunding campaign for the game. Four years later, and fans will finally be getting their hands on the highly-anticipated title.

Indivisible is unique in that it features real-time action RPG gameplay with platforming mechanics, inspired by that of the 1999 Square Enix classic Valkyrie Profile. Unlike other modern JRPGs, it utilizes traditional 2D visuals with breathtaking hand-drawn animations to boot.

The game also boasts over a dozen playable characters, including the main protagonist Ajna, who is a good-natured tomboy with a rebellious streak. Her powers play into the combat, as she has the ability to absorb special people called Incarnations into herself and manifest them to fight alongside her.

Indivisible is slated to release for the PS4, Xbox One, and PC on 8 October 2019, followed by a Nintendo Switch release on an unspecified date later this year. It is already available for pre-order on Steam at the price of RM163.

Pre-order bonuses include Ajna’s loveable pet Tapir following her around in-game and exclusive skins like from Half-Life, Portal and Team Fortress 2 (only for pre-orders on Steam). In the meantime, check out the Indivisible announcement release date trailer below.

A Look Back At The Spinoffs Of Final Fantasy 7

[Rumour] The Next Bioshock Game Will Take Place In The Antarctic