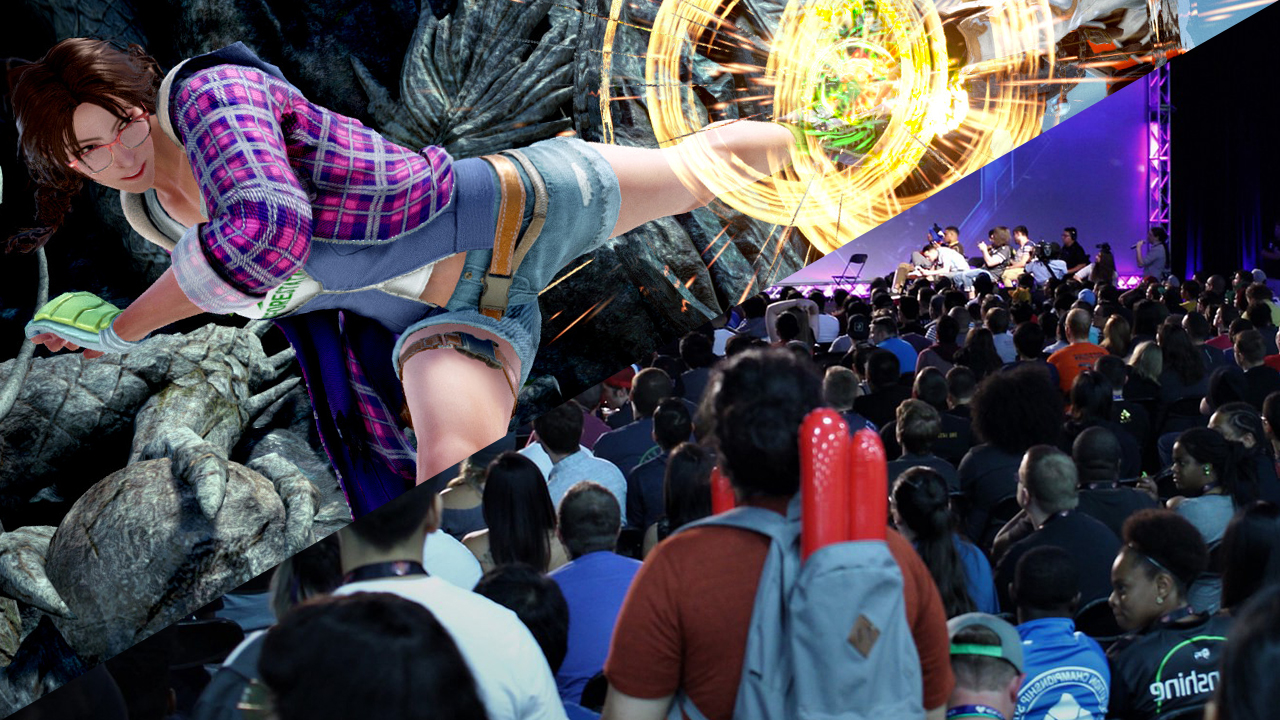 The world championship of fighting games – EVO 2019 is just round the corner, and with it comes the inevitable buzz, speculation and discussion of which players will be the ones to take home the fame and glory of becoming the EVO world championship in their respective games.

This time, the spotlight will be on the top contenders for Tekken 7!

And speaking of spotlights, the Tekken community certainly deserves to have one. Out of all the games that have been on the official EVO tournament lineup over the last 3 years, Tekken is the only game that has had more entrants with each passing year. Going from 1278 attendees in 2017, to 1538 in 2018, and now to a whopping 1885 in 2019, which is virtually on par with Street Fighter V – the game that is usually considered the main event of EVO excluding Super Smash Brothers. Meanwhile, Street Fighter and the other recurring games on the lineup have experienced a decline in entrants, while other games have only been included in one year, only to be left out of the following yearâ€™s lineup.

As you would expect from a game that has had a steadily growing pool of competitors ever since itâ€™s release, the level of play and the number of elite international competitors making their appearance at EVO will be higher than ever before. And remember: EVO 2019 is a special Masters+ event on the TWT Tournament schedule, offering more ranking points than any other event on the calendar. Which means that this year, the stakes at the worldâ€™s biggest tournament are higher than ever!

And so here are our top 5 picks – the standout contenders of the Tekken world with the most momentum going into EVO!

Before we get to our top 5 picks, itâ€™s important to note that there will be quite a few notable names missing from our list. This is only natural given the fact that pretty much all of the top players from across the world will be attending the tournament. Each and every one of them technically has the chance to win it, but we couldnâ€™t possibly cover every top player attending the tournament. Our honourable mentions are:

Last yearâ€™s Tekken World Tour winner – the man who did the impossible by winning it all with the low tier Panda as his only character. Grin and bear it, eh?

While Rangchu might not be as famous as someone of his other fighting game contemporaries, heâ€™s certainly a household name in the Tekken community by now. So far heâ€™s been playing decently in this yearâ€™s TWT season, but not quite at the level of dominance that would have you peg him as a surefire EVO winner.

Still, itâ€™s well worth keeping an eye on a Panda wreaking havoc in EVO pools, especially considering the fact that heâ€™s already made it to top 8 in EVO 2018.

The top-ranked European player in the TWT who is currently sitting at 4th place in the overall standings. While heâ€™s certainly a formidable threat, most of his TWT points have been accumulated from European events. Placing him as an honourable mention rather than a top 5 contender might be due to the natural bias against players outside of Asia.

Nevertheless, weâ€™re looking forward to a strong performance from him and hoping to see him represent Europe in the top 8 of EVO.

As important as the TWT rankings are to the international competitive scene, Chanelâ€™s status going into EVO is proof that points donâ€™t always tell the whole story.

A cursory look at the TWT global rankings will show you that he isnâ€™t even ranked among the top 10 players on the circuit. If you take a closer look at his tournament performance this year, however, youâ€™ll see a much more intriguing story. Chanel has competed in 5 different TWT events this year, and heâ€™s placed in top 8 at every single one, without fail. 7th at the Mixup in Lyon, 5th at Combo Breaker, 2nd at CEO, and 1st place at the highly competitive Dragons Cup TWT Dojo event in Taiwan.

In a tournament that took place just a few weeks earlier in July, he finished ahead of Knee and Lowhigh while crushing Jeondding 3-0 in grand finals without ever dropping a set.

He might not be travelling as frequently as the other top players in Korea, but all of those top players know darn well that Chanel certainly has the skills to win EVO if heâ€™s given the chance.

Quite possibly the most successful Tekken player in the current era of the FGC. A two-time EVO winner and last years 4th place finisher, JDCR has had several periods where heâ€™s looked unbeatable on the Tekken circuit.

While heâ€™s still undoubtedly as skilled as heâ€™s ever been, the international Tekken scene currently has so many transcendently skilled players that even someone who was once considered the best player in the world could have trouble winning major events.

JDCR has been active on this yearâ€™s TWT circuit, but he has yet to win a master level event – although heâ€™s come as close as you could ever want by finishing 2nd at Battle Arena Melbourne and 3rd at CEO.

Heâ€™s currently sitting at 3rd place in the TWT rankings, and his consistency trumps even Chanelâ€™s as heâ€™s actually never dropped below 4th place at TWT tournament this year. JDCR is still looking for that major tournament win, and EVO might just be what heâ€™s been saving his very best performance for.

The reigning Tekken 7 EVO champion will be there to defend his title this year, and his play looks just as strong as it ever was.

Consistency is the name of the game for the top Tekken 7 players, and Lowhigh currently holds the no.2 spot in the TWT rankings thanks to his ability to get top 8 at each and every tournament he attends, regardless of the location or how stacked the bracket may be.

Like JDCR, he has yet to win a major tournament outright this year, but you canâ€™t argue against the value of consistency.

The EVO tournament bracket is a gauntlet unlike any other, and players with the kind of mental fortitude and discipline that Lowhigh displays at every single tournament outing are the ones that always fare best at a huge tournament like EVO.

Heâ€™ll have to eliminate his strongest rivals to defend his title, but Lowhigh could very well do it given how rare it is for us to see an EVO champion stay at the top of their game for so long even after winning the biggest tournament in the world.

The â€œUnknown Tekken Godâ€ from Pakistan who might just be the most feared player in the world right now.

Most Tekken fans will know all about Arslan Ashâ€™s story by now, but for the uninformed, Arslan Ash was a previously unknown player who overcame incredible odds to end up winning the Tekken 7 tournament at EVO Japan 2019.

As a player from a developing country, heâ€™s struggled with resources and visa issues which prevent him from travelling to international tournaments. His journey to EVO Japan 2019 was infamously fraught with hardship, as he went through pretty much every travel issue imaginable on his trip from Pakistan to Japan.

He was denied entry to Korea because he didnâ€™t have a visa, he couldnâ€™t eat or find a place to sleep when he arrived in Japan because the airport currency exchange wouldnâ€™t take Pakistani currency, and he didnâ€™t even have a way to catch his flight to Fukuoka until his sponsor stepped in at the very last minute.

There were multiple stages during the journey where he strongly considered giving up and going home to Pakistan, but through some miracle of fate, Arslan Ash arrived at the tournament venue right as his pools were about to start, and the rest is history.

Arslan Ash beat pretty much everybody en-route to winning EVO Japan 2019, and in subsequent public appearances such as Thaiger Uppercut and a series of FT10 exhibition matches in Japan, heâ€™s looked pretty much unbeatable.

Given his terrifying talent and the fact that his lack of tournament appearances means that other players will have very few means to study his playstyle, itâ€™s no wonder that most of the Tekken community considers Arslan Ash as the favourite to win EVO…apart from the one person who might just stand the best chance of beating him…

We keep going on about the current state of the global Tekken scene and how the level of competition is higher than ever before, but somehow there is still a man who manages to scoff at the competition while winning major after major.

The 2019 champion of Combo Breaker, CEO and Versus Fighting – aka the 3 biggest tournaments outside of EVO. This level of dominance is already rare throughout the history of fighting games, but to see it in this era of the FGC is almost inconceivable.

As the no.1 ranked player on the TWT circuit, he currently towers over the other competitors as he stands a whopping 480 points ahead of the no.2 ranked Lowhigh. Most longtime Tekken fans would almost certainly have Knee as their favourite to win EVO, and thereâ€™s just one caveat to that – Arslan Ash.

After watching Arslan Ashâ€™s historic performance at EVO Japan 2019, Knee was enamoured with the Pakistani playerâ€™s skills to the point that he made a trip to Pakistan just so that he could train and study the players there. He then flew out to Japan specifically so that he could be there when Arslan Ash visited to run exhibition matches against the Japanese players. At this special occasion, Knee and Arslan Ash played three stunning sets that were all incredibly close, with Knee winning two out of the three FT10 sets.

Their next meeting was at Thaiger Uppercut where Arslan Ash emerged as the unquestionable victor, but given that Knee has demonstrated the ability to adapt to Arslan Ashâ€™s seemingly unstoppable playstyle, we would expect that Knee will be fully prepped and ready to take on the ultimate challenger at EVO 2019.

Thereâ€™s no guarantee that weâ€™ll be blessed with a set between Knee and Arslan Ash at EVO. But if it does happen, itâ€™ll certainly be a match for the ages.

Like our picks for EVO 2019, Tekken 7 edition? Let us know on our website or Facebook. If you’re more of a Street Fighter V connoisseur, check out this piece instead.Â