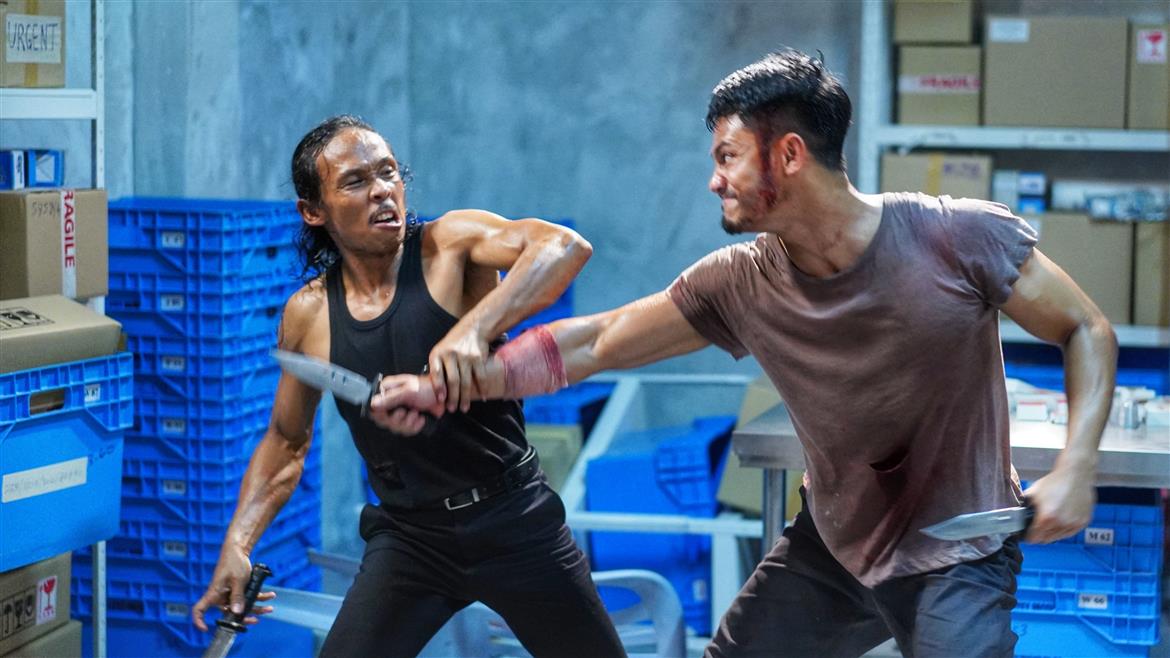 PASKAL, a military gung-ho film by Adrian Teh, was an admirable Malaysian-made film that failed to decide whether to be a serious military drama or an 80s action flick. Thankfully, he learned from his mistakes there and proceeded to create a pretty solid action flick called WIRA.

She Ain’t Heavy, She’s My Sister

The story revolves around Hassan (Hairul Azreen), an ex-lieutenant of the Malaysian army who returns home to his village to find it under the oppressive thumb of a corporation calledÂ  Rajamerah, run by Raja (Dain Iskandar Said).

And with renowned martial artist Yayan Ruhian as Raja’s number one bodyguard Ifrit, you can expect a ton of ass-kicking to come with this package. Even with its emotional heart-to-hearts between Hassan and his estranged sister-slash-ass-kicker Zain (Fify Azmi) and father Munas (Dato Hilal Azman), every problem in this flick can be resolved with fists, kicks, makeshift weapons, and a parang which ends up being the film’s symbol.

If the plot sounds like it was copy pasta’ed from Walking Tall, it kinda is. I even spotted a dash of Sega’s Yakuza when it comes to the show’s theatrics and drama between the siblings and Raja’s; at one point, his daughter Vee (Ismi Melinda) demands a rematch with Zain in a seemingly illegal boxing ring MMA-style fight. Hell, there’s even a cop (Henley Hii) who would turn a blind eye at Hassan’s vigilantism just to deliver justice, and a side character who eventually has a small arc where he fights against the people he’s working for.

Fortunately, Adrian Teh and his crew backed it up with lovely action scenes, a solid visual style and cinematography, and a charming brother-sister duo who we can root for from start to finish. It’s not exactly challenging your mind when it comes to the grey area of crime and punishment, but I’d be lying if I said I didn’t have a gloriously fun and silly time just seeing Hassan beat up fools with his equally-skilled Zain.

If you like your fights taking place behind a condom factory, in a speeding minibus, and in the aforementioned boxing ring followed up with pretty spiffy foley for the impacts, you’ll pay attention to WIRA.

Don’t expect WIRA to change your mind about action films; it’s pretty standard stuff coupled with a lot of theatrics that needs a right frame of mind to watch. Even if that bit is handled adequately, the film really needed a bit more context to highlight why Hassan’s hamlet really needed saving.

I do wish that there’s a lot more time and extra scenes showcasing the town’s past, as well as explore how Hassan and Zain got into fighting in the first place. A few scenes showcasing the matriarch before she’s written out for the show’s present timeline would help make us feel a bit more for the duo and even the dad.

And the less said about the shared Malaysian cinematic universe being shoehorned at the end in a very last-minute fashion, the better.

Barring that, WIRA hits it where it counts and kicks away the indecisiveness of its predecessor film while relishing in its simple yet effective “violent justice against a company that corrupts a small town” schtick. With a bit more extra filling and meat, this knuckle sandwich would have KO’ed its peers and inspirations instead of sidelining for them.