Just this morning, I came across this pretty nifty Facebook challenge post on my feed. Basically for the next 30 days, you have to list down a song matching the criteria listed. 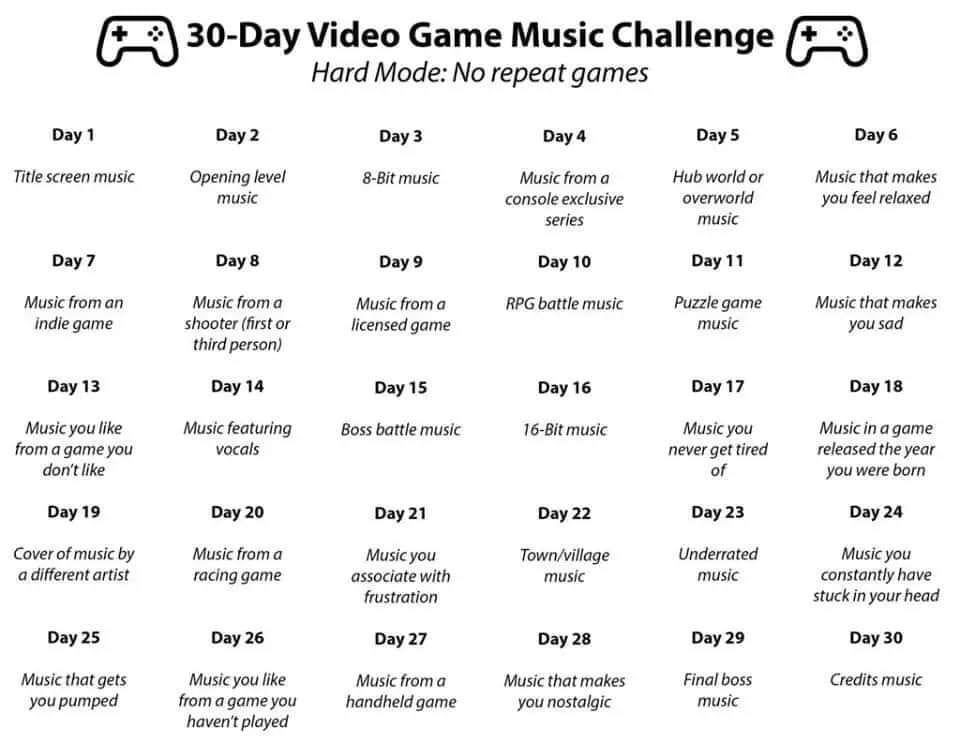 Of course, the added challenge here is that you cannot repeat titles. One song per game. So let’s do this. For these 30 days -including today- I will put on my SoundScape hat and dish out my favourite tunes to match the requirements.

Any game featuring vampires, theatrics, time-travelling, and soul-traversing needs a haunting and chilling soundtrack to accompany it. And I feel that this main theme to the third in the series (Blood Omen and Soul Reaver were the first two) sets the stage for the twists and turns that follow.

With sound bites from Blood Omen echoing amidst the chimes and hard percussions that start getting heavier past the 1:02 mark, it’s clear as day that main anti-hero Raziel means business. Even if half of that business involves block-pushing and wall-phasing.

Mega Man X’s “Opening ~ Highway” is a landmark tune, but there’s a sense of sadness in part 4’s opening when you play as X. Like as if the more he fights his everlasting battle for peace, more innocent Reploids get caught in the crossfire.

The fact that almost all the bosses here are disillusioned military bots instead of infected Reploids sets the sombre-yet-ass-kicking mood of part 4’s entire score, kicked off with aplomb here.

What are we fighting for, indeed….

Naoki Kodaka is known for making Sunsoft bangers and earwigs from the NES/Megadrive Batman games to Fester’s Quest. Journey To Silius is basically one of his later and darker works, channeling a post-apocalyptic future that is kinda like Terminator.

Wait, wasn’t this NES supposed to be a Terminator game before the license-holders got cold feet and went to another game publisher instead? I wonder how that turned out.

InFamous (PlayStation Exclusive) ~ “Anything For Trish” by Amon Tobin

Tobin’s audio manipulation magic works wonders for this soundtrack. While “The Courier” and “Stampton Bridge” showcases his unique sounds better, I personally gravitate towards this track because the string work here sounds so damn edgy and cool.

Time to start flexing my JRPG knowhow. If you haven’t played this Quintet gem, find a way. Miyoko Kobayashi’s work in Enix is just too good not to pass up.

Arguably the best music to calm your nerves while you’re exploiting the RPG’s many, MANY bugs. It’s probably the last good thing to come out of Todd Howard & company.

Day 7: Music From An Indie Game

An overall fun peppy soundtrack with outstanding synth and chiptune work. Jake Kaufman knows how to make catchy chiptune music by focusing on melodies tailor-made for 8-bit synths, then adding more layers to make each chorus and verse more impactful.

Day 8: Music From A First-Person/Third-Person Shooter

One of the many reasons people loved PC gaming back in 1993 and 1994: this awesome shooter. Great tracks from Bobby Prince, the man synonymous with good PC gaming music from your Commander Keens to your Duke Nukems.

Before Konami became, well, post-Kojima Konami, the company made awesome 90s TMNT beat-em-up games. This track proves that you can get away with recycling the soundtrack from the cartoon series with 8-bit synths if you’re creative enough.

The rest of the OST is just as stellar and should be placed alongside TMNT The Arcade Game and TMNT The Hyperstone Heist as definitive TMNT games with great 90s era soundtracks.

Now THIS is a battle theme I can get behind. Rocking 2000 JRPG era music, plus chord and bridge variations (2:00) that add a ton of flavour to something you’re going to hear for 40+ hours. You know s*** is getting real when your fights go beyond the 1:16 mark.

The Gameboy Tetris theme and Dr. Mario’s “Fever” are catchy and all, but they pale in comparison to this grandstanding work from Go Shiina.

Other standouts from this puzzle game include “I/O” and “Goâ†’”

Hitoshi Sakimoto and Masaru Iwata made their mark in the video game soundtrack world with this epic “orchestral synth” collab work with performer Katsutoshi Kashiwabara and sound programmer Hidenori Suzuki.

From epic battle themes like “Trisection” to the more sad & despair-laden pieces like this one that comes with a lot of range, the OST is essentially a masterpiece.

A boring-ass JRPG that took too damn long to get its point across. At least it had some great and epic tunes to go along with it, coupled with a pretty memorable battle theme that was remixed in a superior sequel.

A fun & cheery pop song that goes well with this Sega racer, elevated by the vocals of the talented Donna Burke (who did Metal Gear music). If you want to find out more about her, check out our special interview.

What a world of difference an arrangement can make. When I think “cool boss theme”, this pulse-pounding rockin’ anthem comes to mind; it gets better after its sweet acoustic intro .

I wasn’t expecting much from a mid-boss, but I’m glad Chizuru Kagura’s fight theme proved me wrong.Â The KOF 2003 arrangement is an honorable mention; that fight is way tougher in comparison.

Hey, I like SoR 4’s music a lot. But you cannot go wrong with the classics that paved the way. Yuzo Koshiro is definitely a man ahead of his time with beats like these that he still plays in clubs nowadays.

Day 17: Music You Never Get Tired Of

Streets of Rage ~ “Keep The Groovin'” by Yuzo Koshiro

Like I said, Yuzo Koshiro is a musician ahead of his time. He basically made people take video game music seriously with Super Shinobi, followed by these sets of bangers in his first-ever Sega beat-em-up project. I’m just glad that future fans are keeping the groove going with part 4, which you should totally get if you haven’t yet.

Day 18: Music In A Game Released The Year You Were Born

“Yep, we’ve come a long way since bleeps and bloops”; probably the most overused phrase when starting a feature on video game music. But until 1984 hit, there was quite a lot of repetition and loops in video game BGMs that felt more like obligations than jingles.

Games like DK Jr. remind us that the old ways weren’t necessarily the best.

Day 19: Cover of music by a different artist

I still get goosebumps when 2:40 comes in. Yoshitaka Suzuki has gone pretty far since his Ninja Blade days.

Day 20: Music from a racing game

I’m all for WipeOut’s OST, but I’d like to bring up F-Zero since Nintendo doesn’t.
Hence, Big Blue remix from that one Nintendo racing game they should goddamn remaster or create a sequel for on the Switch.

Day 21: Music you associate with frustration

The first fight with Ori 2’s giant spider was bad enough; it was Dark Souls-style stuff but with Disney-like graphics.
Once the music hits to 3:27 and you’re waylaid with a precise platforming segment, shit just got real. First time going into this, I think I died 10 or so times for this entire segment. But it was so worth it.
Ori 2 = great candidate for GOTY 2020.

Stay tuned at 6:30pm GMT+8 tomorrow for the next update.Â

Disclaimer - This guide is under development; MapleStory 2 is an ever-changing MMO after all, so keep watching this space periodically for updates. S...

Feature,News
Cowboy Bebop's Main Trio On Their Characters & Working With A Corgi

It's only one more week until the live-action adaptation of the revered sci-fi space bounty hunter show Cowboy Bebop shows up on Netflix. The show sta...

After a year of hiatus thanks to the COVID-19 pandemic, the summer of gaming and Electronic Entertainment Expo are back again. Even if it's in an onli...