Haven’s Exploration & Love Story Makes Up For Its Simple Combat

I feel Haven’s survival RPG moniker is an exaggeration. True, your main characters Kay and Yu can level up their stats, and there’s a nifty partner combat system that runs in real-time. But it’s pretty simple to get the hang of; you have two different attacks, you can guard, and you can pacify enemies whose health has been depleted. Outside of a few “boss” encounters, you can stock up on healing tools and persevere through the challenges.

Some enemies can resist Blast damage instead of Impact, while others can only take max damage after pulling off a heavy attack. But there aren’t any other variations to make its nifty combat controls & system all the more engaging than it should be. Thankfully, Haven’s combat isn’t the focus here. The spotlight goes to its lovely alien planet arranged in a maze-like fashion, and its leads’ narrative. 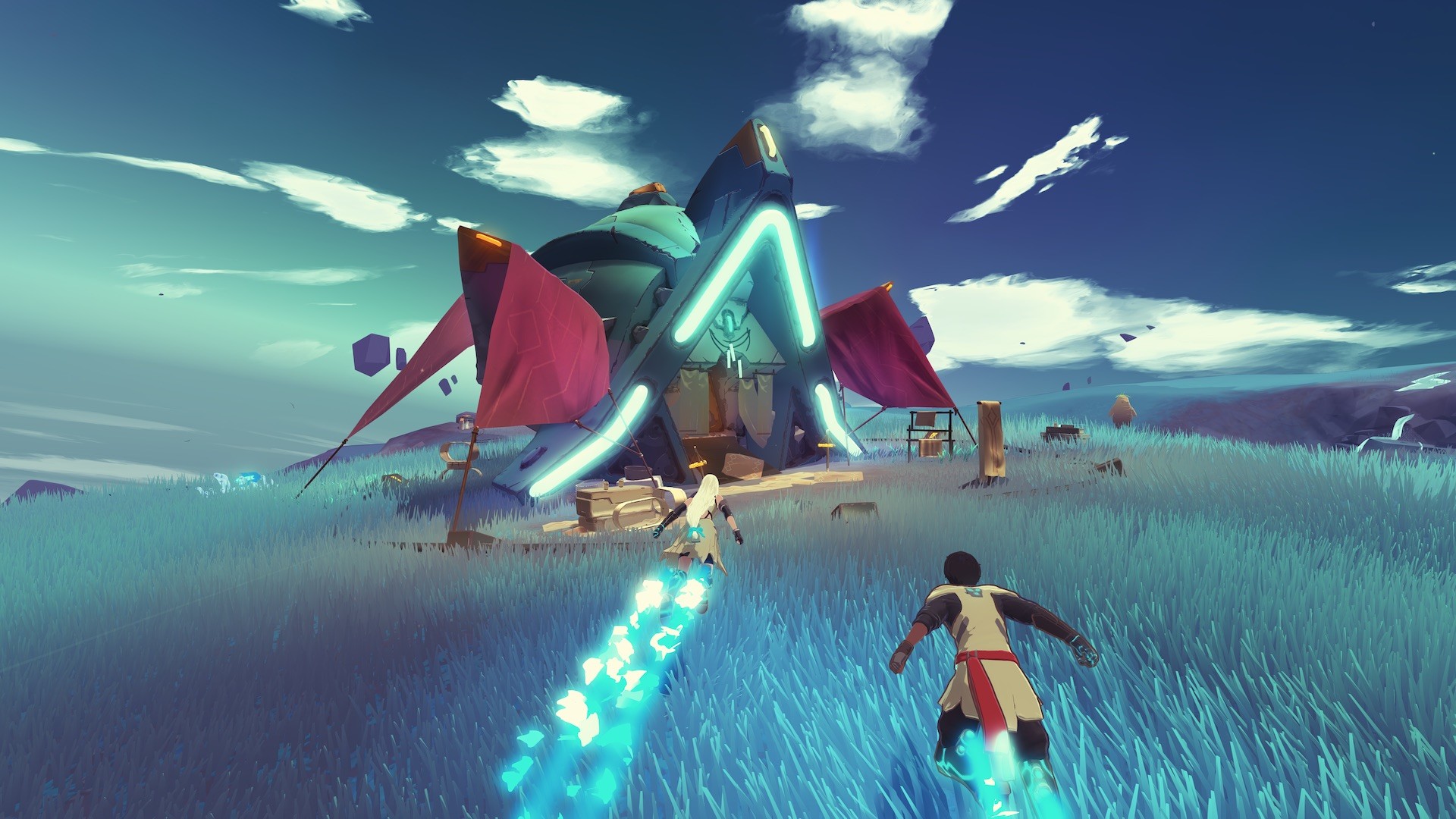 Let’s delve into the latter. See, Kay and Yu are lovers who escaped from their respective societies and chose to be stranded onto an alien planet. It’s up to the two to survive and live on the planet’s resources while also not get eaten by the wildlife there.

Both Kay and Yu are a charming couple who joke with each other, argue over both serious and silly things, and show their affection (kissing, caressing, or making love off-camera) through lovely dialogue moments and voice acting. While some lines do come off as forced for the sake of moving the plot, the overall relaxed and endearing tone when the couple are just being themselves just feels genuine. You want to uncover every piece of interaction and dialogue not just to hear what they have to exchange, but also to level them up to deal more damage as well as take it more.

And its more touchy subjects like sex? That’s all handled very tastefully here; any semblance of nudity is either done off-screen, implied, or covered up artistically (especially with its alluring pastel-filled 2D intro). Despite its outerworldly setting, Haven’s message & writing highlights the pros and cons of a relationship that many couples, and even ex-couples, can relate to. Except for maybe the bit where you feed a marble cake to attract a giant alien manta ray to serve as your makeshift taxi cab. 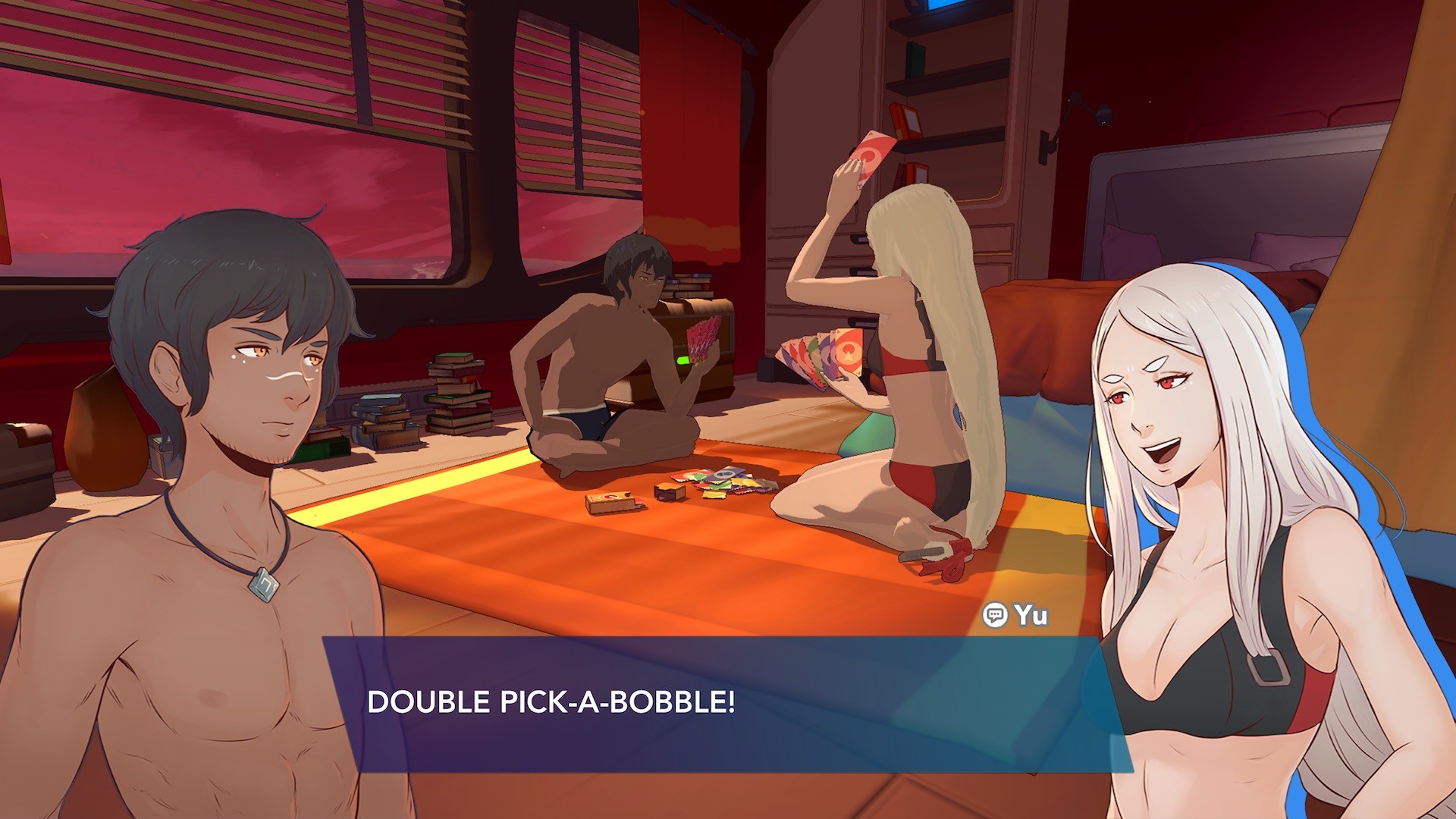 Exploration-wise the pair of lovers glide and hover all across the planet to either gather resources (to either keep your appetite meter filled up or create healing aids) or clear out red rust that’s infecting the planet. To get rid of it, you need to charge your boots with “thread energy”, which you get by following thread lines from start to finish.

Some thread lines can get you atop platforms and hard-to-reach spots in the air. If you’re lost, you will eventually get a map that shows the general direction you need to go to. There’s also an overarching mission where you need to collect crystalized rust to repair your ship.

But really, Haven’s not a game you should rush to get to the end. Its lovely electronica soundtrack, its lush simple cel-shaded visuals, and its hovering controls all combine for an esoteric chillaxing ride. There’s even a lovely “beach holiday funtime” section you can completely miss out if you just beeline towards the story instead of taking your time.

Which is why it’s a shame that the camera that tails you could have done a better job at orienting you, especially when you’re doing u-turns and drifting to stay on-course a thread you’re gliding on. It’s not the worst camera, but the default settings will need getting used to movement-wise.

Other than that, I can’t see any huge issues that plague Haven. It’s a solid indie title that does its job at being a survival exploration game with a great story on how love can transcend practicality no matter how society proves otherwise. Its combat could be a lot more engaging, but it’s serviceable and takes a backseat to its tale about a pair of lovers and the planet they’re stuck in.

A John Wick game is in the works by Thomas Was Alone and Volume developer Mike Bithell and his studio, Bithell Games. Titled 'John Wick Hex', it's a "...

Nintendo has officially announced the Nintendo Switch (OLED model). It will launch on 8 October 2021 for the price of US$349.99. According to the o...