InÂ WandaVision Episode 9 (which is also the WandaVision season finale), the story finally reaches its conclusion following the shocking Episode 8.

Iâ€™ll be discussing heavy spoilers fromÂ WandaVision Episode 9 so if you havenâ€™t seen them or want to avoid spoilers, nowâ€™s your chance to stop reading. If you havenâ€™t, you can check out my previous articles on the first two episodes,Â Episode 3,Â Episode 4,Â Episode 5,Â Episode 6Â and Episode 7.

There’s An Entire Chapter Devoted To Wanda In The Darkhold; Wanda Is Stronger Than Doctor Strange 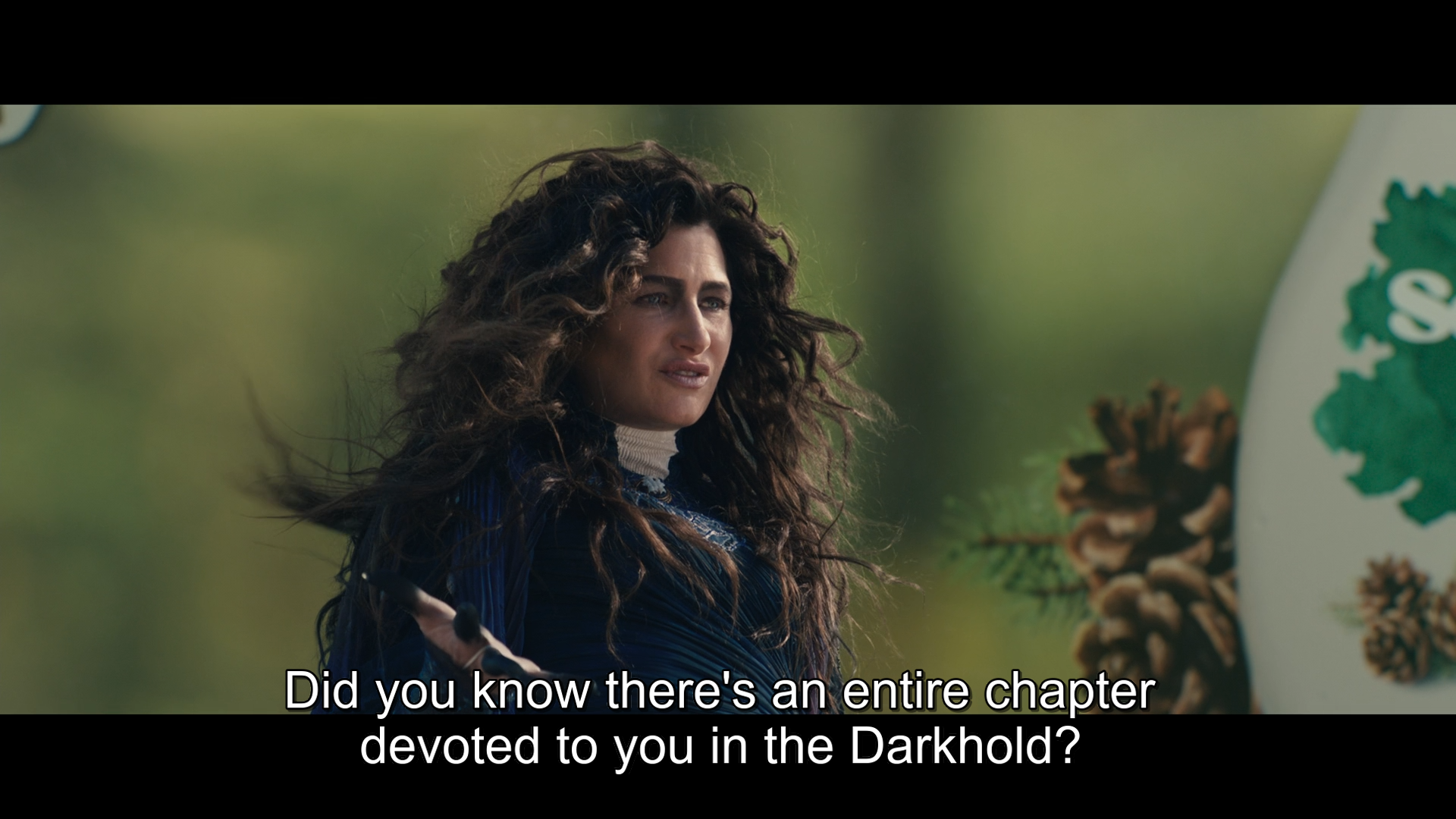 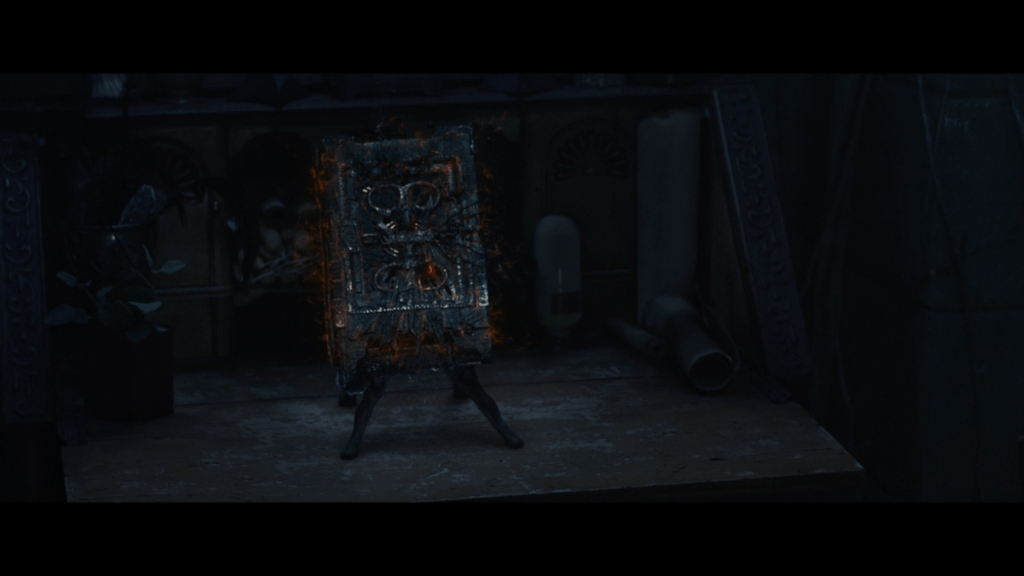 Darkhold as seen in WandaVision Episode 7.

Agatha also confirms that the Scarlet Witch (Wanda) is more powerful than the Sorcerer Supreme AKA Doctor Strange. 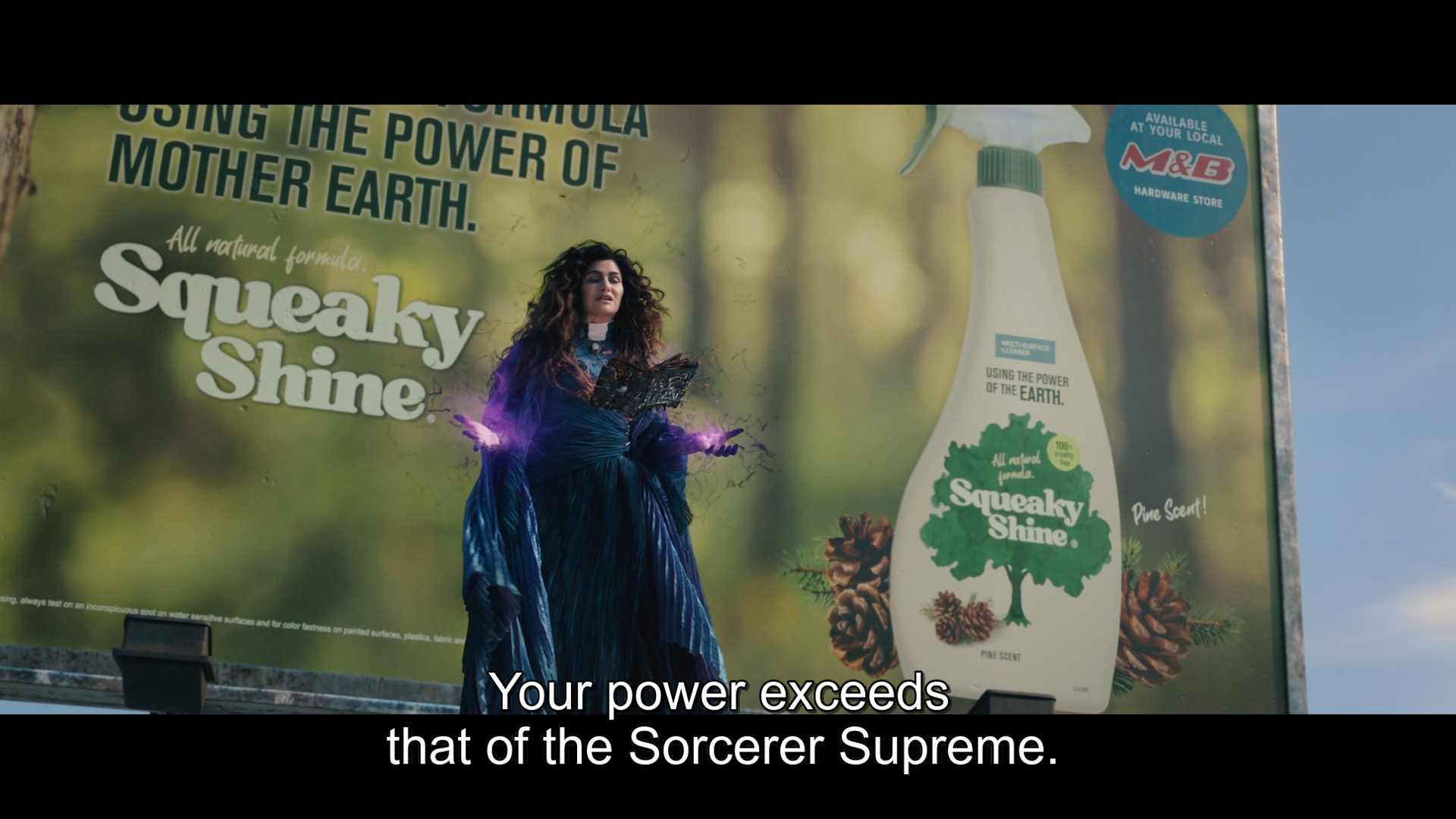 We also see her wielding the Darkhold, with a page depicting the Scarlet Witch. 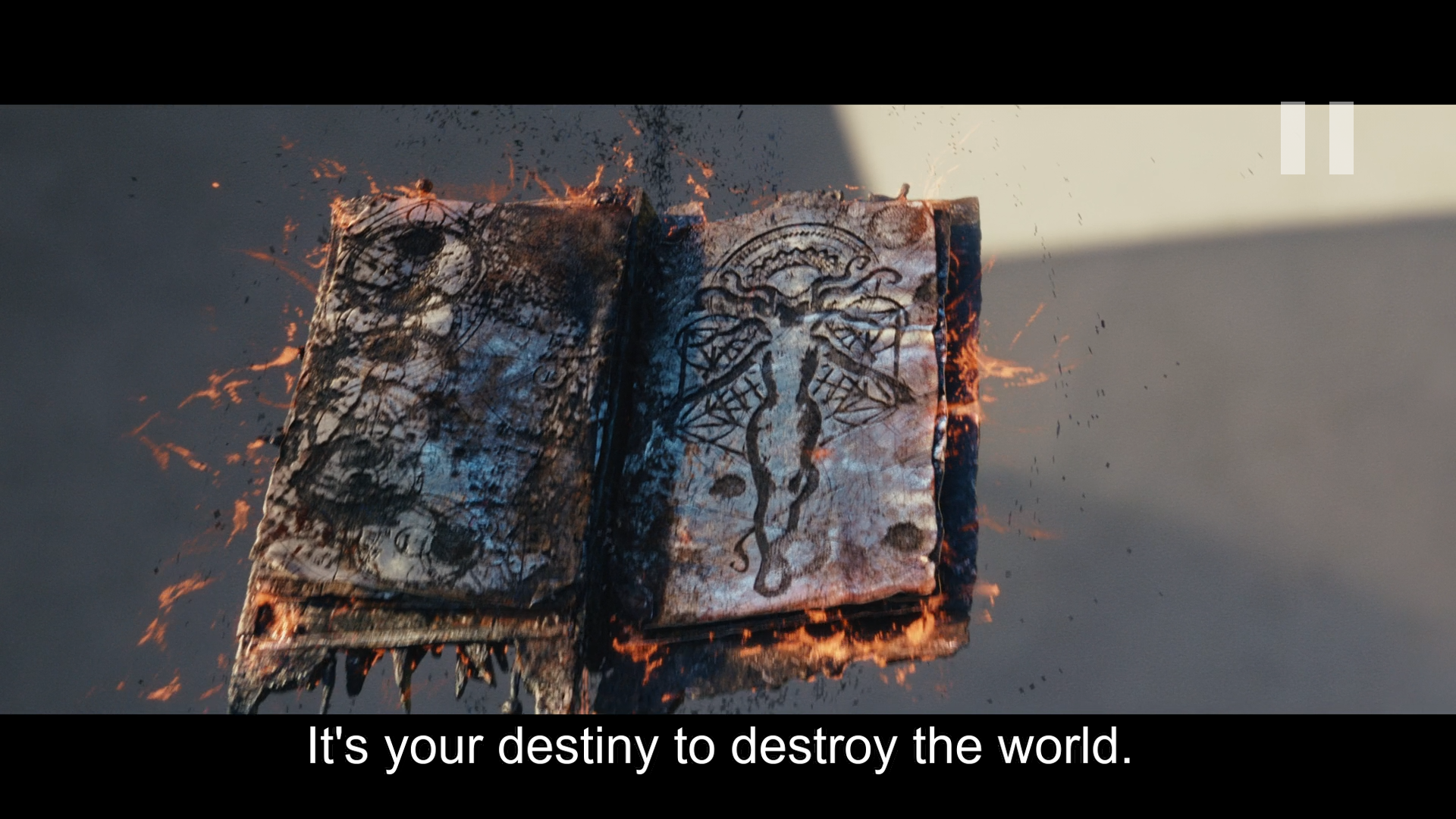 Dottie Is Just Sarah, Not Mephisto 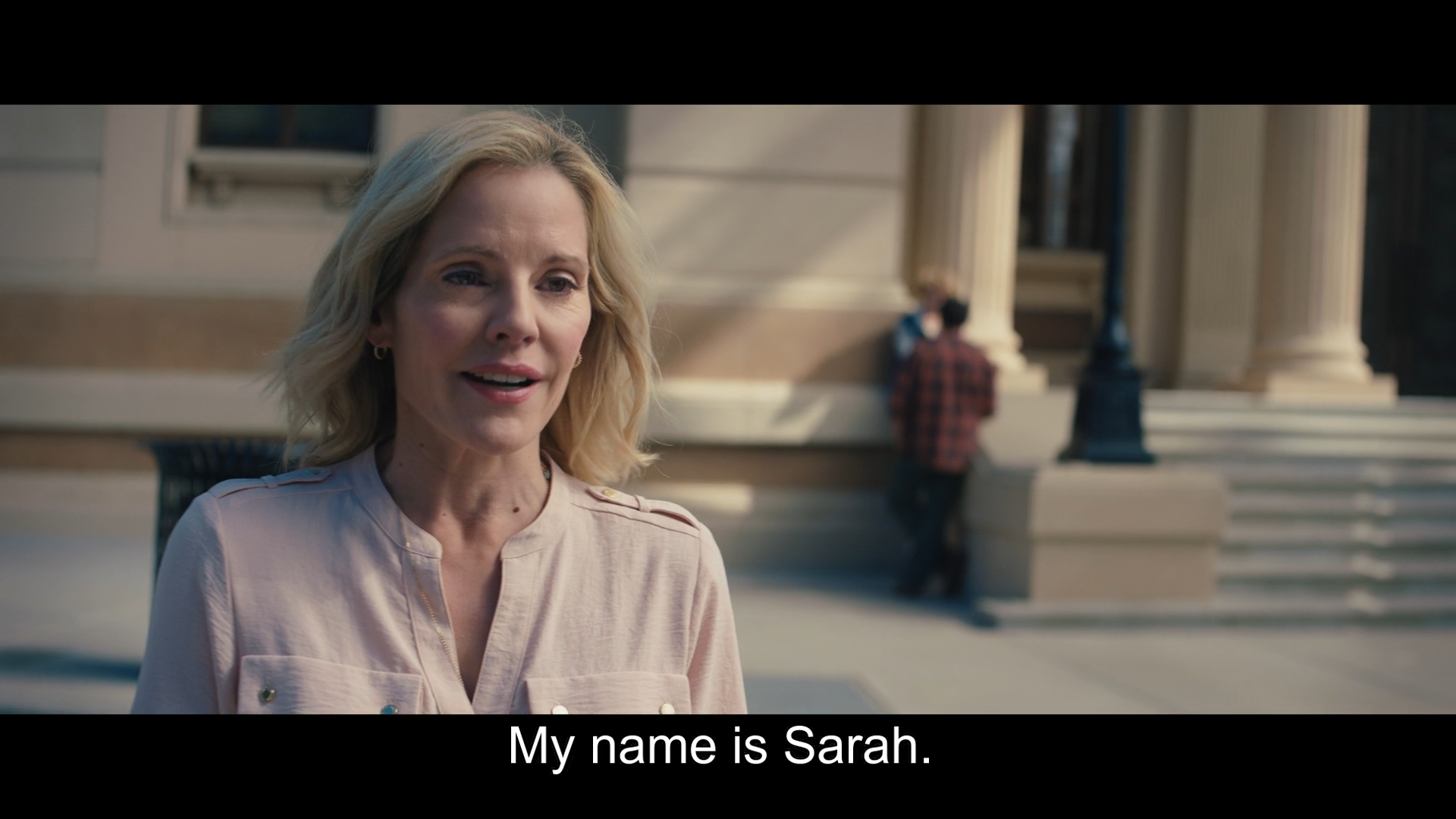 Remember all the theories about who Dottie really is? Is she Mephisto? Is she Enchantress? Actually, she’s just Sarah. 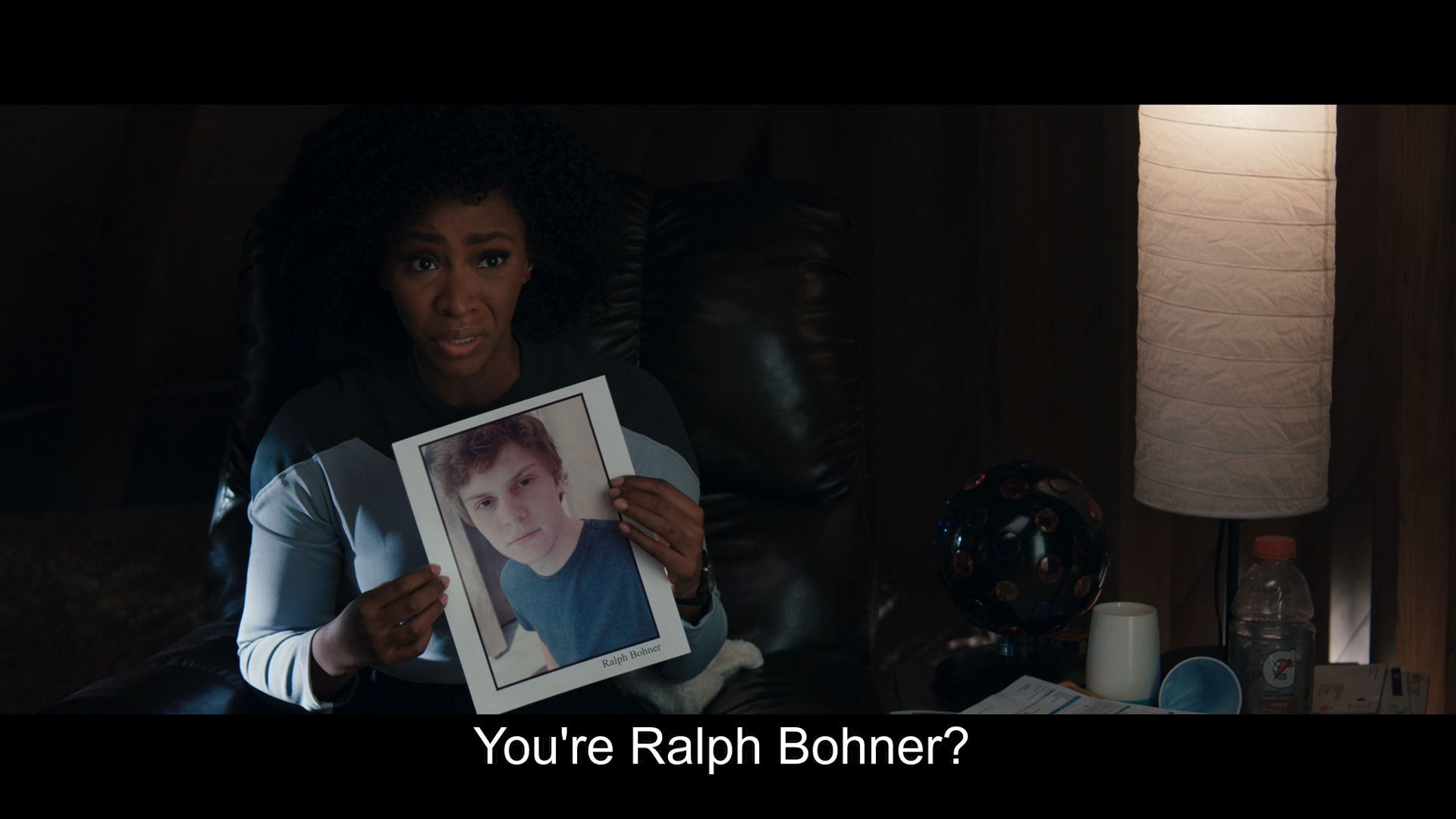 Wanda Releases The Citizens Of Westview From Her Hex 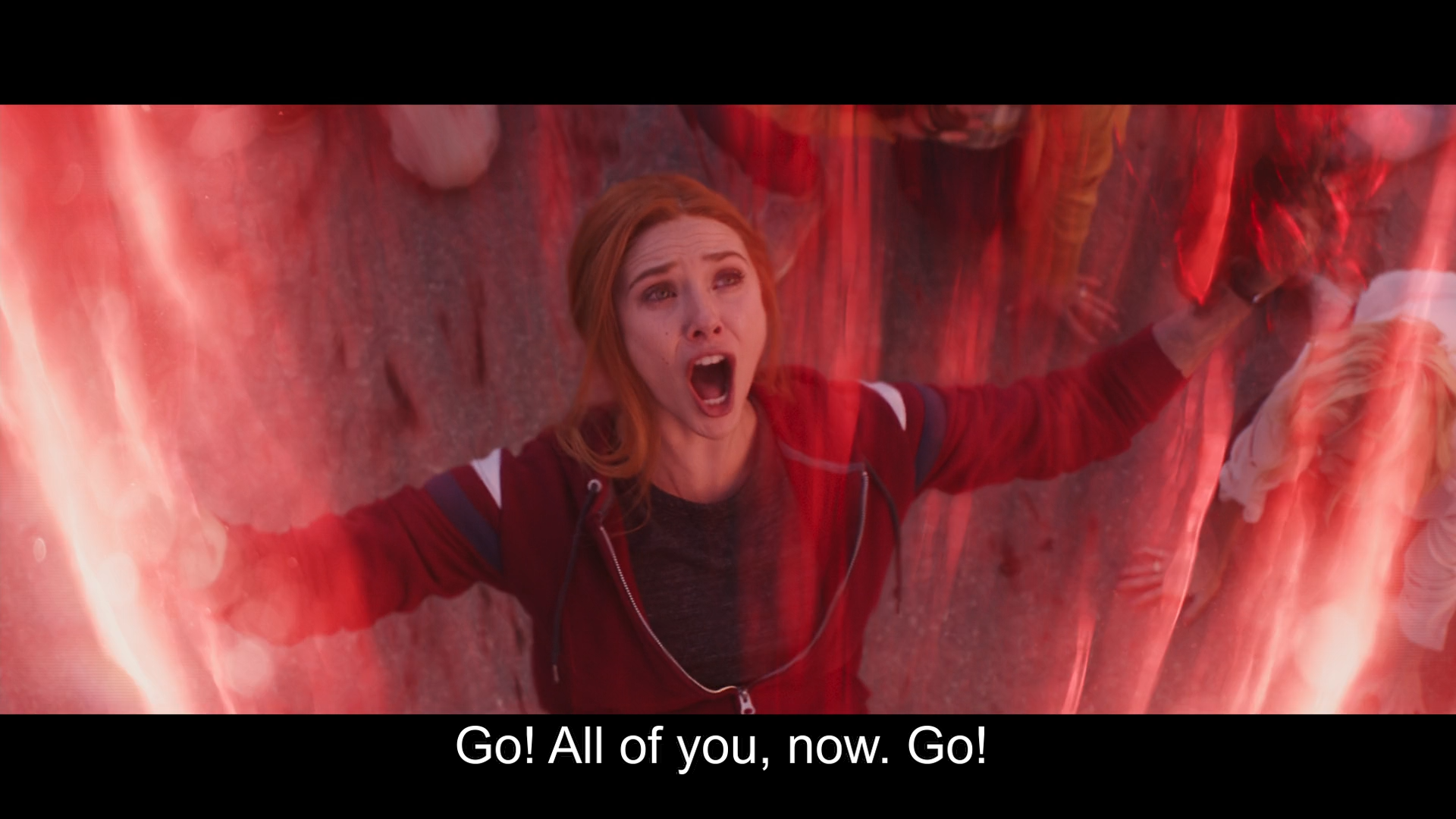 Wanda finally lets go of her Hex hold on everyone in Westview, opening the borders. 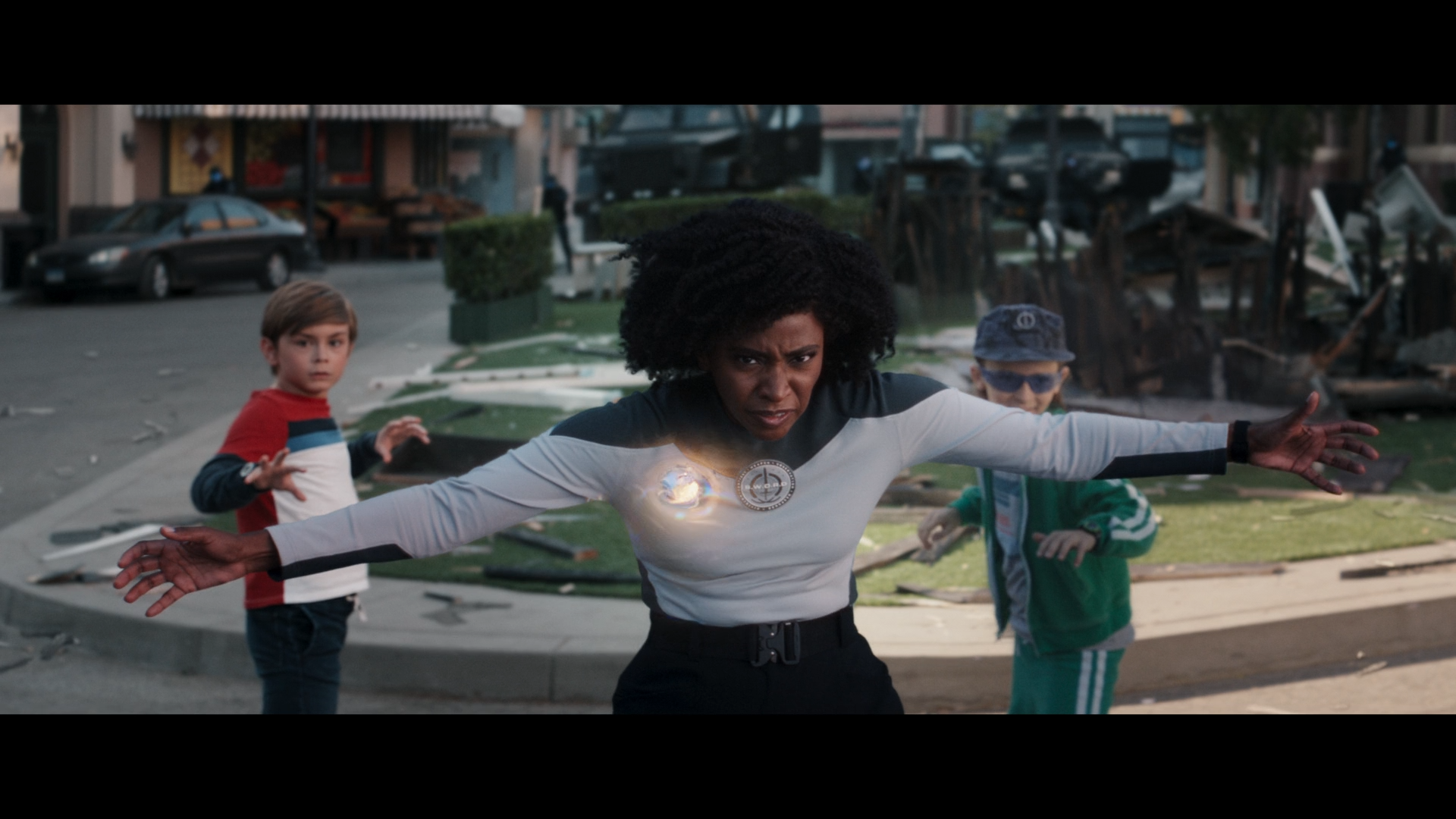 Monica uses her electromagnetic spectrum powers to absorb the kinetic energy of the bullets shot by Hayward. 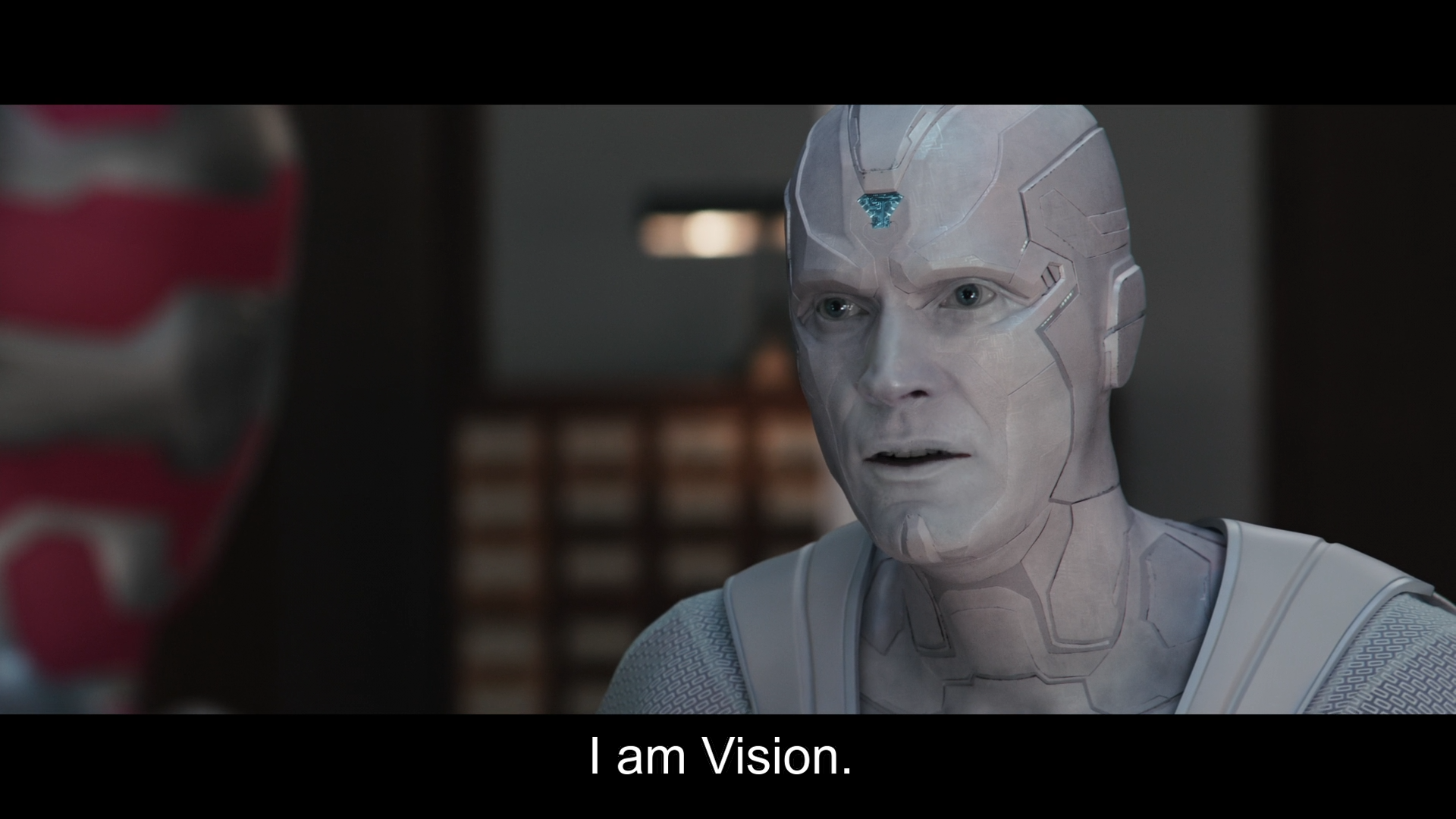 In case you forgot, White Vision is actually made from the original Vision’s body. Fake Vision (the one we’ve been seeing in WandaVision) has been a Hex construct.

The fake Vision restores the memories of the White Vision, which essentially makes him a reborn Vision; on other words, the true Vision revived. 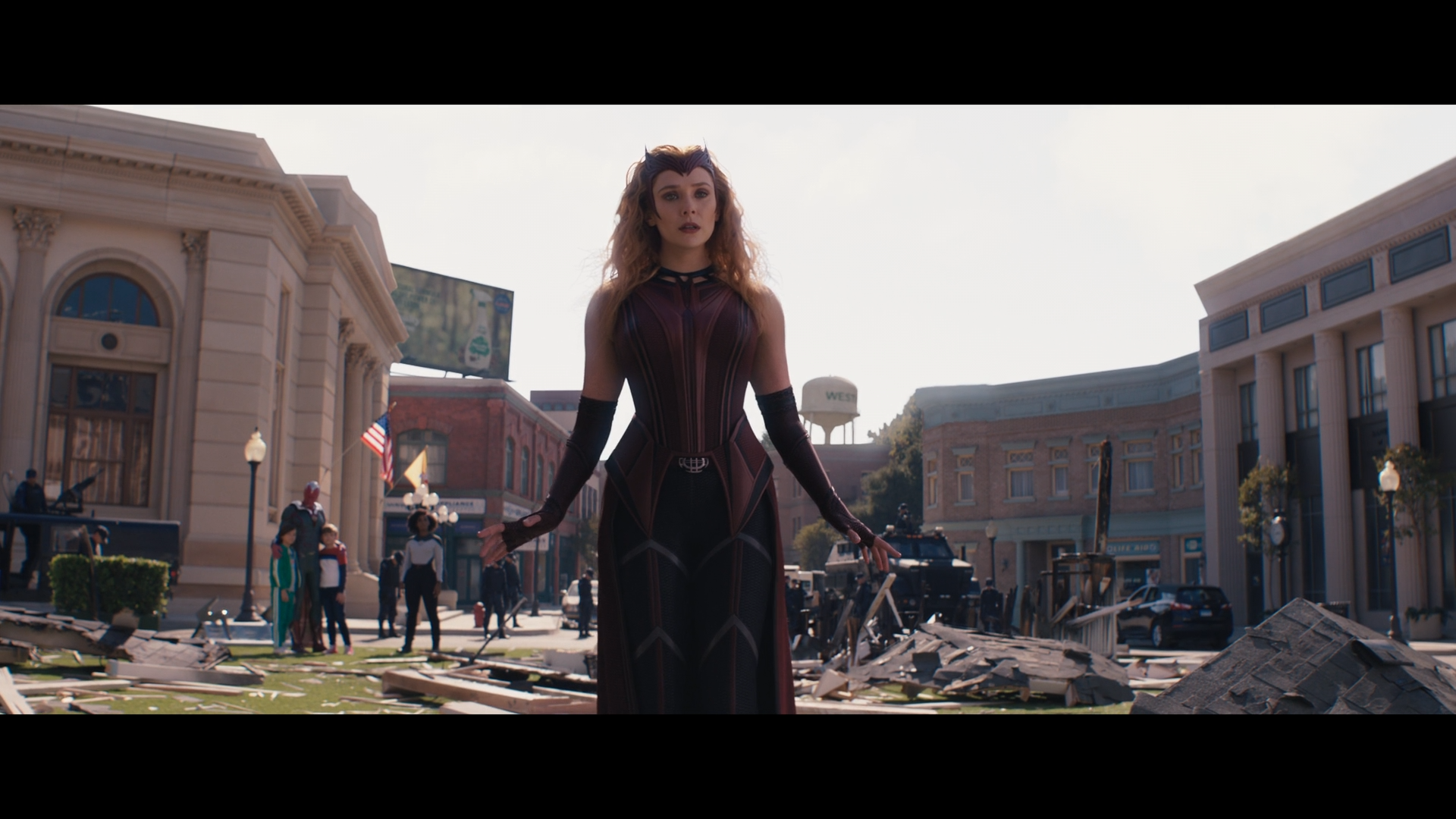 After defeating Agatha by re-absorbing her powers from the evil witch, she obtains a new Scarlet Witch costume that’s most comics-accurate yet. 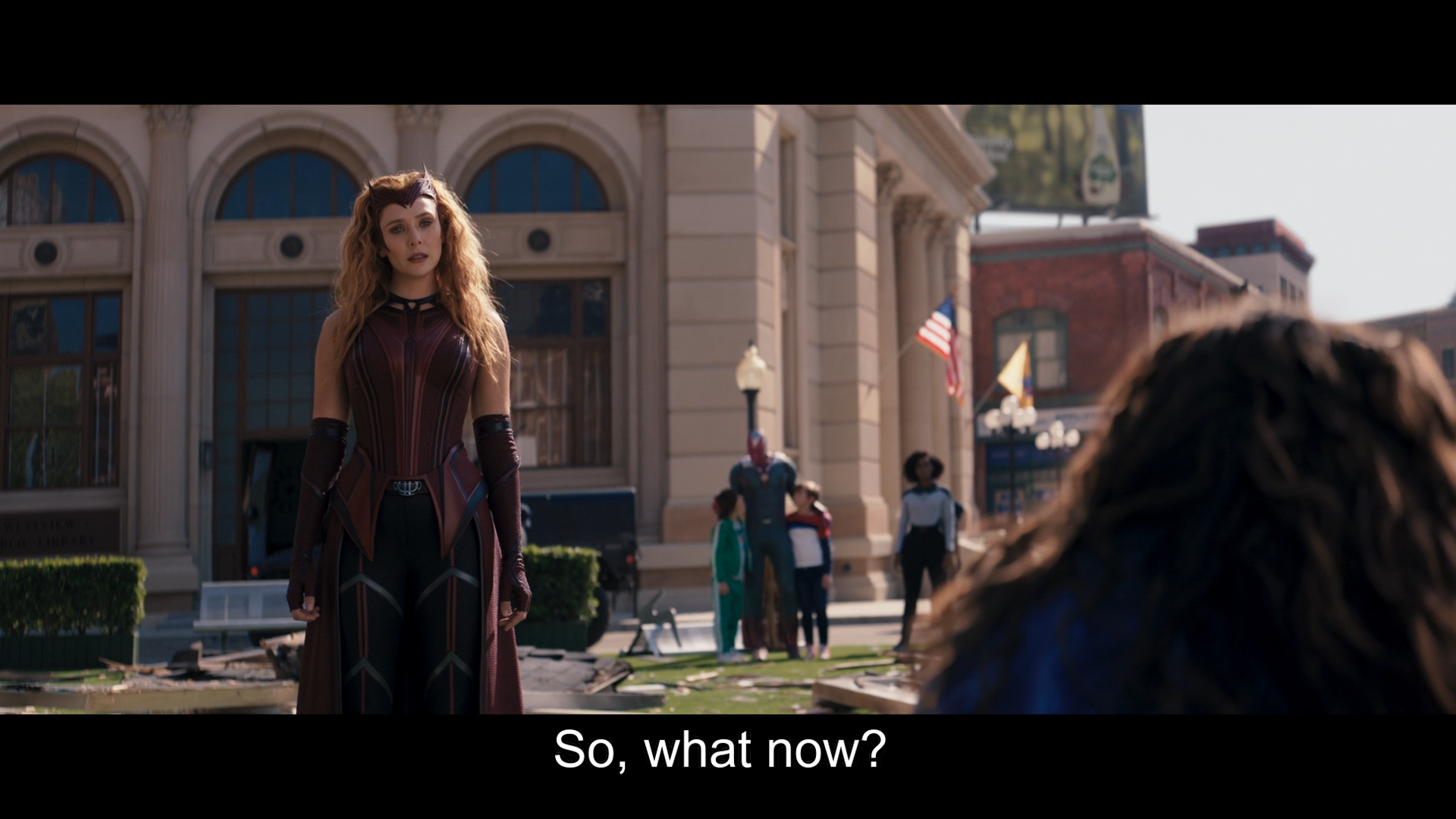 See below for comparison: 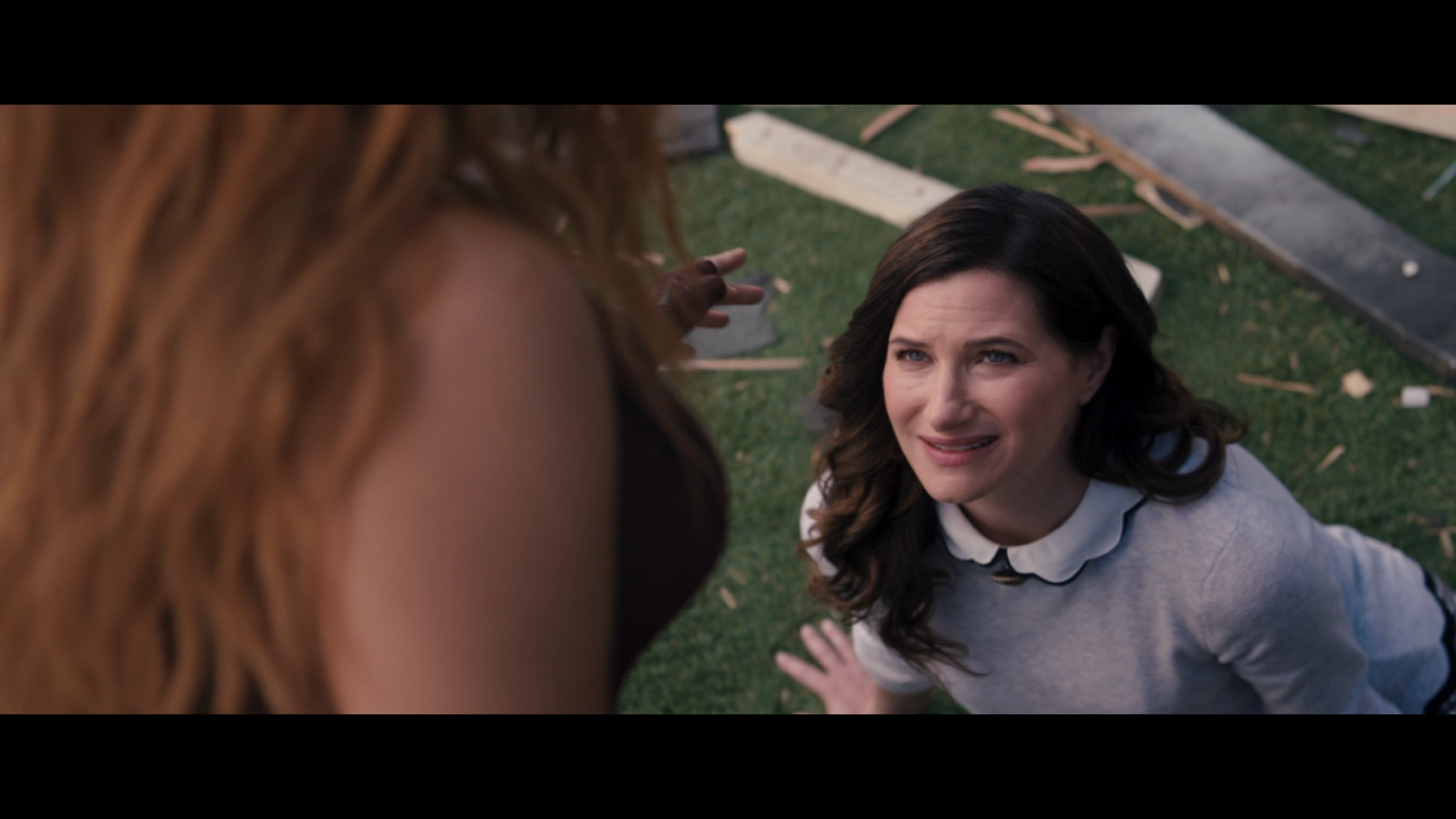 Wanda finally traps Agatha in her nosy neighbour role as Agnes in Westview, but she remains alive. Wanda confirms that she created the fake Vision in Westview from a piece of the Mind Stone that “lives in me” (which probably means the original Mind Stone piece that sparked her powers) and mostly, “her love”. It’s heartbreaking as this happens just before the Westview Hex completely dissipates. 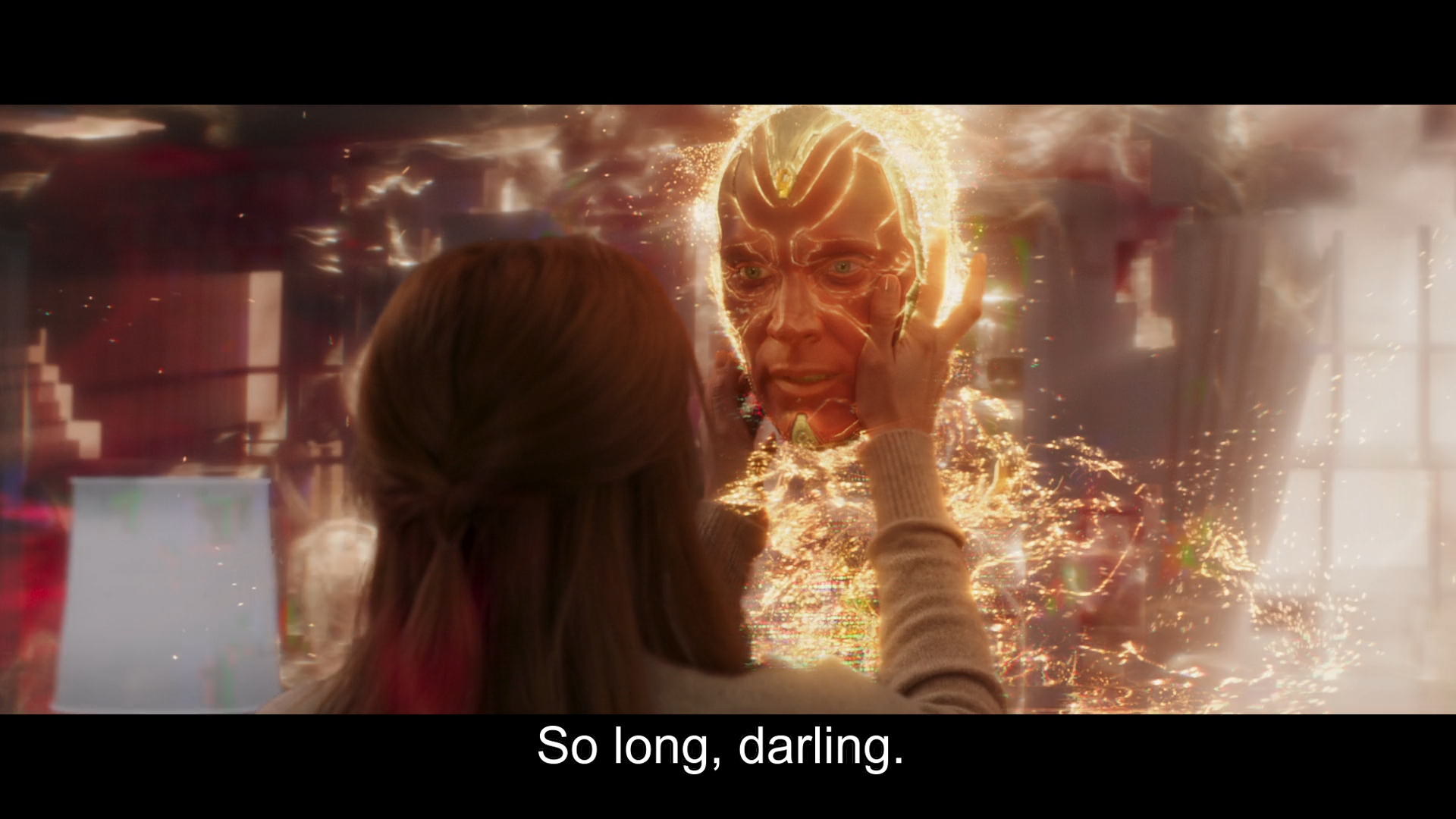 There Are Two Post-Credits Scenes In WandaVision Episode 9 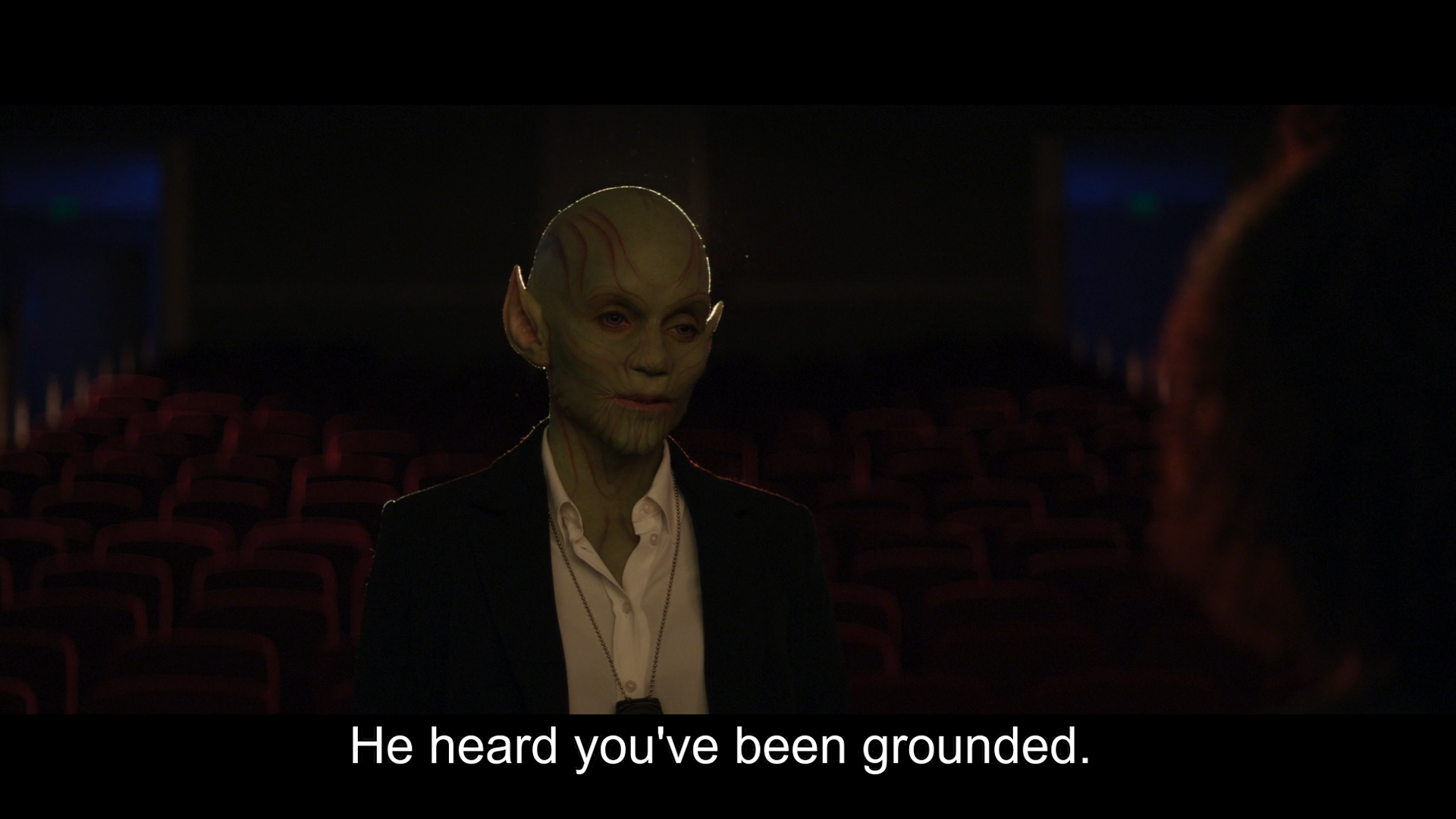 In the first post-credits scene, SWORD Director Hayward gets apprehended by the FBI, and Nick Fury (the Skrull impersonating Nick Fury in 2019’s Spider-Man Far From Home was Talos) sends a female Skrull to tell Monica that he wants to meet her. When Monica asks “Where?”, she simply points up, indicating that we might finally get to the real SWORD headquarters; an orbital space station known as the Peak.

This might lead into the events of Captain Marvel 2 or even the upcoming Disney Plus series Secret Invasion. At this point, it could be either or whichever comes first.

The second post-credits scene is even more fascinating. We see Wanda somewhere in a remote location near the mountains (Wundagore Mountain?). We see her sitting on a porch sipping a drink before we meet an astral projection of the real Wanda (the same ability that Doctor Strange can perform). Wanda is reading the Darkhold, and she then hears the sounds of her children screaming for her help.

The last thing we see is Wanda’s eyes and a flash of red, which might lead directly into the events of the upcoming Doctor Strange In The Multiverse Of Madness. There you have it, folks. WandaVision is officially over and we have two post-credits scenes that will likely lead into two different movies. The first, with the female Skrull and Monica, is probably for Captain Marvel 2, while the second, showing an increasingly-more powerful or unstable Wanda learning magic from the Darkhold, is likely for Doctor Strange In The Multiverse Of Madness.

Both movies are slated to release in 2022, with Doctor Strange In The Multiverse Of Madness in March 2022 and Captain Marvel 2 in November 2022. It seems unlikely (for now) that we’ll see much of the effects of WandaVision in the upcoming Spider-Man No Way Home and The Eternals, though who knows?

Thanks for following me throughout all of WandaVision. Stay tuned on Kakuchopurei for more on comics, games, movies and pop culture!

Feature
Go Westeros: The Stark Siblings & The Other Greyjoy About The End & Spoiler Braids

Our Game of Thrones Season 8 lead-up coverage to the season premiere on April 15 (GMT+8 time) continues with this instalment of Go Westeros. Today, w...