Neo The World Ends With You Guide: Beating The Reapers’ Game

NEO The World Ends With YouÂ is a sequel to the original 2007 Nintendo DS game,Â The World Ends WIth You. The sequel will feature a brand new protagonist named Rindo, a brand new story that delves deeper than ever into the Reapersâ€™ Game, a super-flashy action-based combat system, and more.

NEO The World Ends With You is now available for PS4, PS5 and the Nintendo Switch, with a PC version coming on the Epic Games Store sometime in summer 2021. Here are some tips to get you going in the Reaper’s Game. 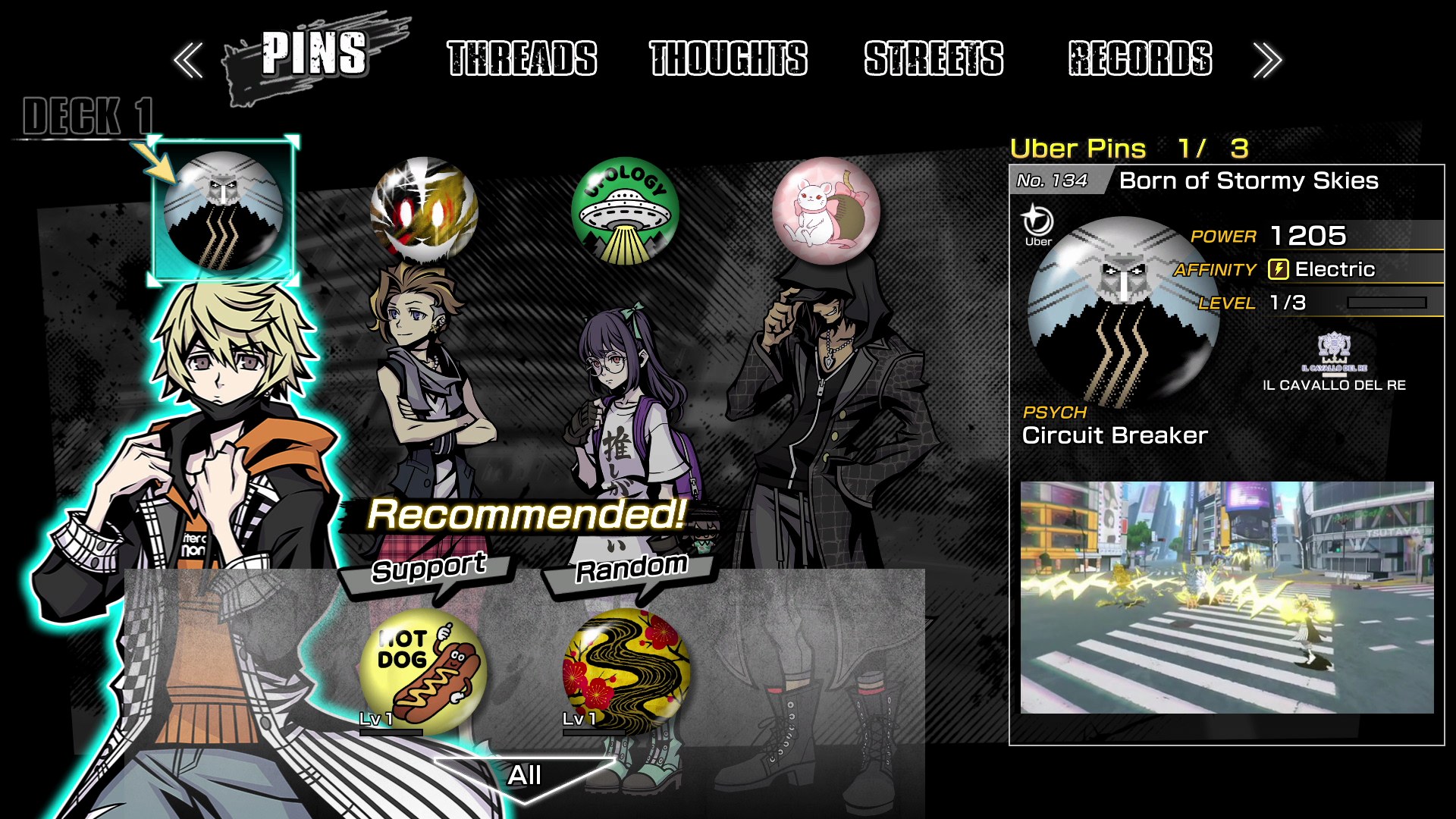 There are over 333 different Pins in NEO The World Ends With You, each of which has a different ability attached to it. There are too many to choose the best and it ultimately all depends on your playstyle anyways. However, as a general rule, it’s better to choose Pins with rapid and fast attacks that can build up the game’s Groove meter with Beatdrop combos as fast as possible, especially since post-battle rewards usually depend on how fast and efficient you were in combat.

What’s important is that you should totally try each Pin at least once, and I recommend that whenever you get a new Pin, quickly switch to that one and use it until it fully levels up. Why? Some Pins can evolve into new and more powerful Pins when they reach max level, which gives players incentive to stick with one Pin until it fully levels up. If you want the best Pins and especially if you’re a completionist, level up each Pin to the max level.

You’ll often get many of the same Pins, so to save time and effort, you don’t really need to level all of them to the max. It’s more efficient to level up the Pins that you haven’t had the chance to do so yet.Â

You Can Actually Press More Than One Button At A Time During Combat, But Don’t Button Mash The combat in NEO The World Ends With You is unique in that the game’s combat is based on the Pins and each Pin’s ability is assigned to a single button that executes an attack or action. At one point, you’ll get up to four different characters, which translates to four Pins and four buttons. The game doesn’t tell you this, but you can actually press all the buttons simultaneously at the same time and your characters will perform the attack/action.

However, pressing more than one button is only recommended when you need to mix up a rapid attack and a charged attack at the same time to sustain your Grove with as many Beatdrop combos as possible. Unfortunately, mashing the buttons don’t work well when you factor in the fact that Pins have a limited amount of energy before a cooldown period begins and the meter has to recharge. If you button mash and exhaust all your Pins at the same time, it will leave you vulnerable to enemy attacks as you wait for the cooldowns to end.

It’s recommended that you press only one Pin at a time and mix between all four so that you won’t be stuck with all four Pins in cooldown at the same time. The combat in this game rewards speed, combos and efficiency. Stopping to heal in the middle of battle will result in worse results/rankings and worse drops. Still, that’s not the biggest reason why healing Pins are mostly useless. Unlike other JRPGs, your characters in NEO The World Ends With YouÂ share the same team health bar, and this health bar regenerates back to full after the end of each battle. That’s also why there are no healing items in this game. Battles often go so fast that you’ll rarely need to heal during combat.

Plus, there are difficulty options that you can change at any time in the game. Provided you’ve already unlocked them, of course. More on that below: 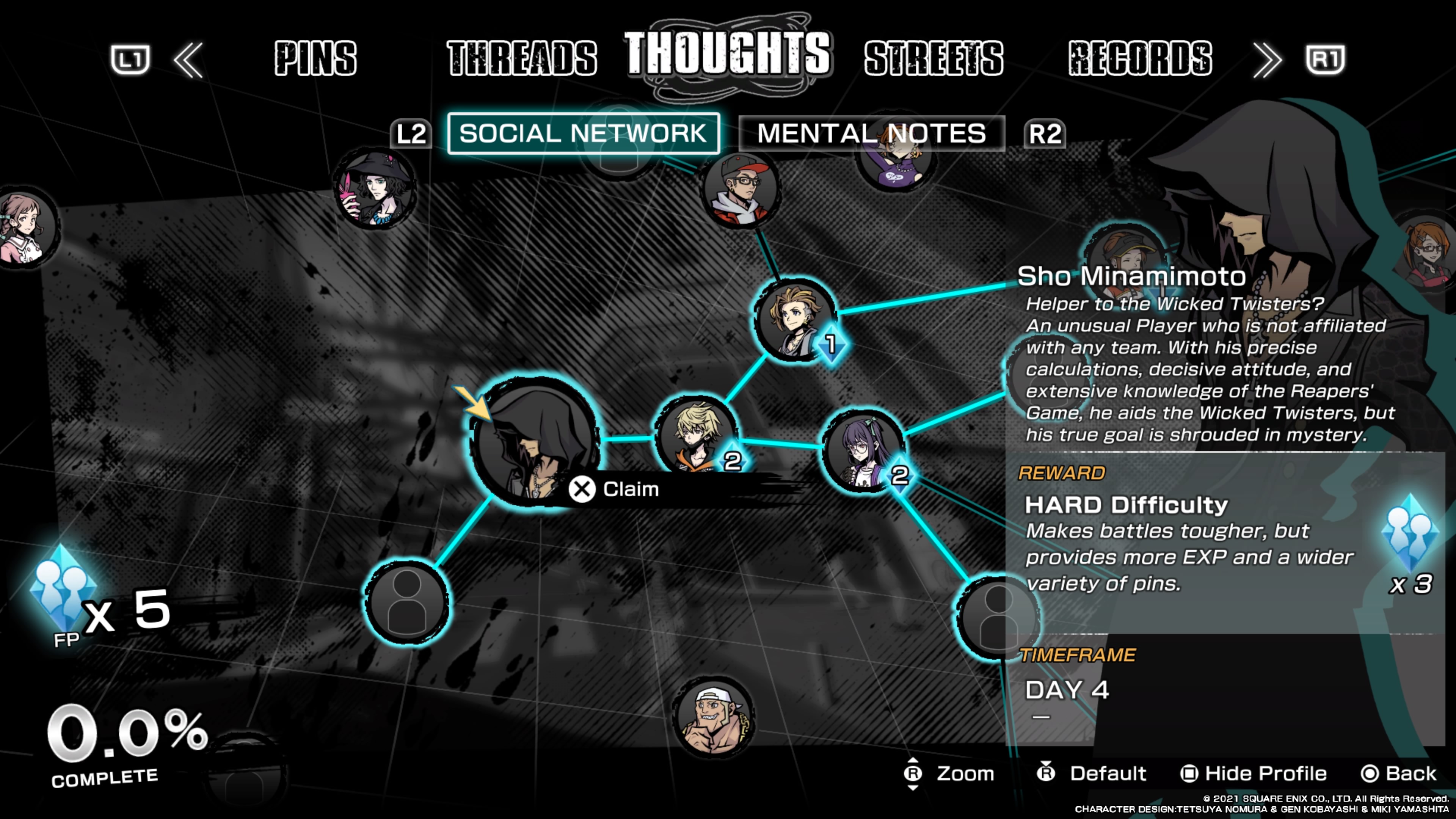 A few in-game Days (or chapters) into the game and you’ll unlock the NEO The World Ends With You’sÂ version of the Social Network. No, it’s not Facebook, and no, it’s nothing like the social links/confidants in the Persona games.

Doing certain story and side quests in NEO The World Ends With YouÂ will earn you Friendship Points or FP. As you meet more people, their icons will be unlocked in the Social Network tree, and you’ll spend Friendship Points to unlock special abilities or items. Some of these are game-changing and valuable while others are pretty meh.

I haven’t completed the entire Social Network myself, but there are some early one you should unlock as soon as possible. For example, there’s one ability tied to party member/companion Sho Minamimoto, which unlocks the ability to swap to a harder difficulty.

Why is that important? Like I previously mentioned, you can change difficulty at any time in the game simply by pressing the middle touchpad on your PS4/PS5 controller. Hard difficulty doesn’t simply make the game harder, but most importantly, battles now give you more EXP and better drops/loot, which translates to more money and more powerful Pins. Enemies will drop rarer and more powerful Pins on Hard or Nightmare that they wouldn’t otherwise drop on Normal or Easy difficulty.

How To Increase/Improve Your Drop Rates Even More Besides increasing the game’s difficulty, what you can do to increase or improve your drop rates even further is by pressing the middle touchpad on your PS4/PS5 controller and lowering your level. Don’t worry, you’ll still keep the max level that you’ve already reached and EXP will accumulate as they normally would to increase that max level. What’s unique about NEO The World Ends With YouÂ is that levels only increase the max HP of your characters. Your level doesn’t do anything for your stats, which is a departure from JRPGs (more on how to increase your stats in the following tips below).

As such, lowering your level will dramatically increase your drop rate, improving your chances of getting better loot and more powerful Pins. This means that you don’t have to do as much grinding. The only downside of lowering your level is lower HP, considering that your stats aren’t tied to your level.

Check Mental Notes For Side Quests 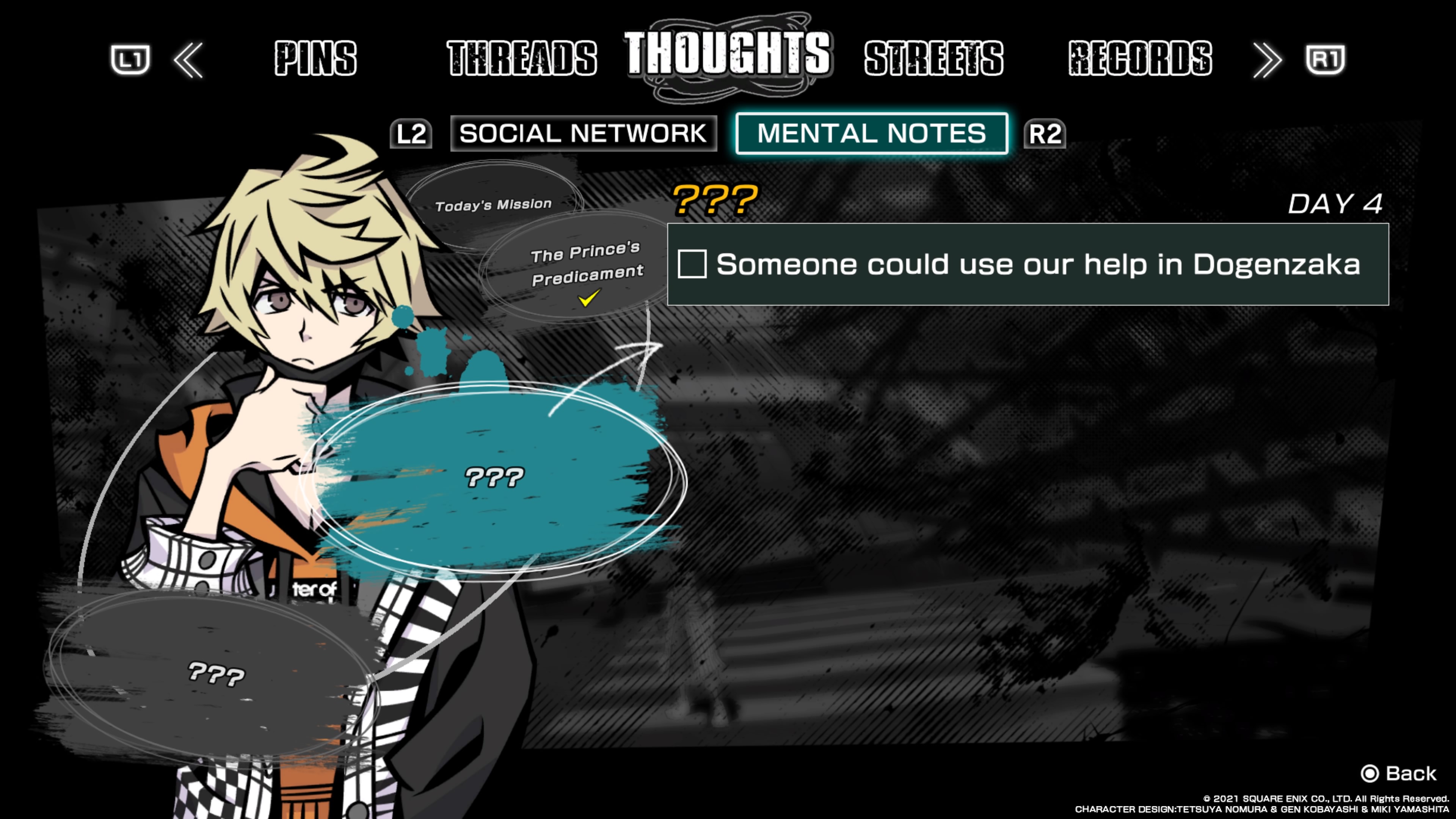 Remember what I said about side quests to get more relationships for your Social Network? Yeah, the game doesn’t really just show you where there are. You’ll have to check your Mental Notes in the game’s menu and look through the thought ring. These are usually stated as “Someone could use our help in this location”, which means that there’s an NPC in that area that will give you a side quest. Just go to the stated area and find an NPC with a Friendship Points icon above their head.

Clothes And Food Are The Only Way To Increase Stats 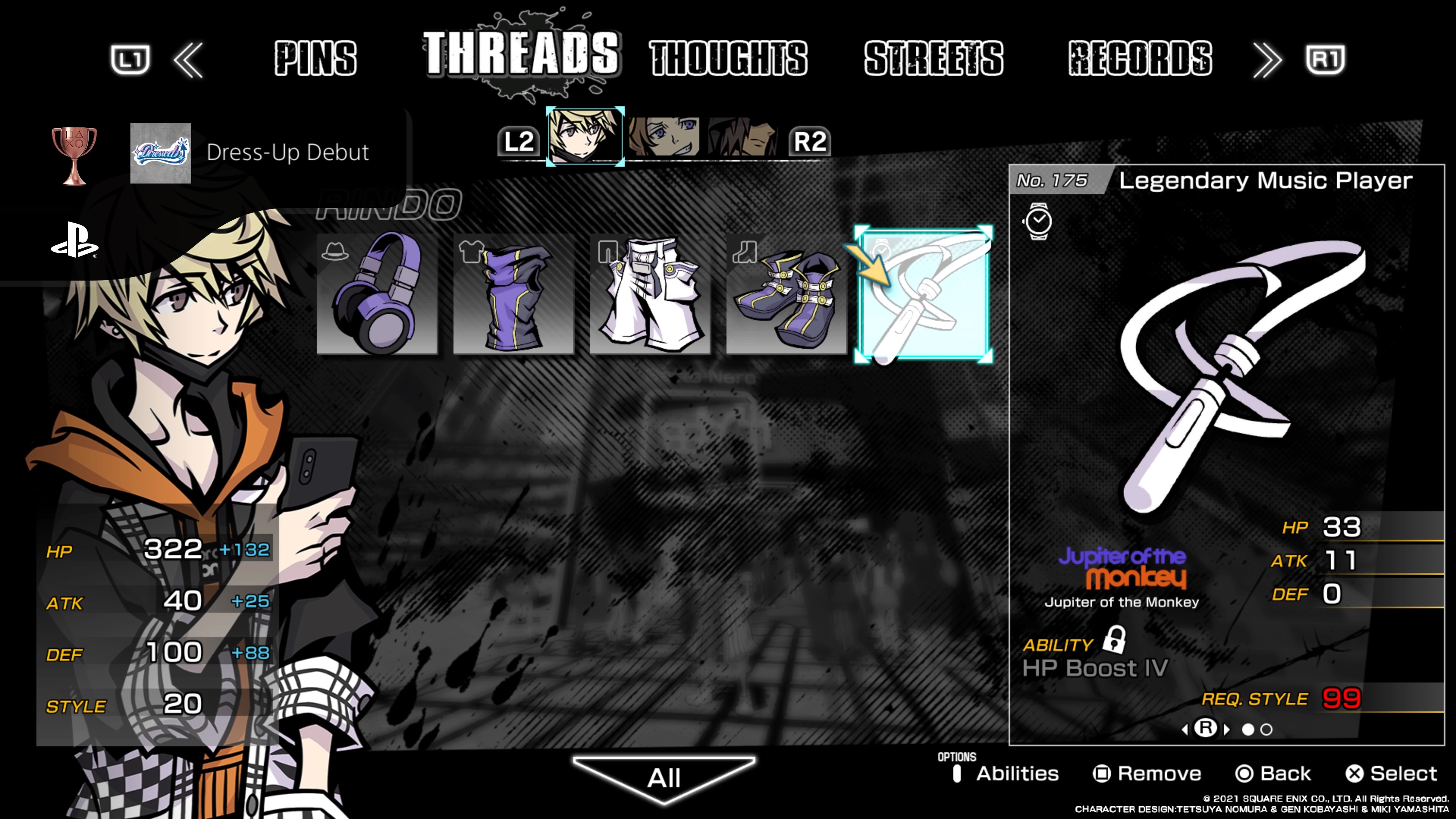 Buying clothes and food may seem optional at first, but they’re extremely important if you want to excel. There are many shops scattered throughout Shibuya and just pop in whenever you come across one and have extra money to spend.

You can increase your HP, attack, defence, and Style by buying and eating food. There’s a special Fullness meter in the game, where eating food will fill this up. Once it’s full, you can’t eat anymore. Also, even if it’s empty, there are no negative effects whatsoever. Engaging in combat will deplete the Fullness meter and you’ll be able to eat again, thus be able to increase your stats.

As such, it’s extremely important for you to stop by restaurants and cafes in between battles if you have the money to do so. This is one of the only ways to increase your character’s stats. To make things more complicated, you can’t just feed your characters any food. They each have different reactions to different food so it’s best to keep an eye on what food they like. This may sound frustrating but there’s an easy way to discern this (more on this in the tip below).

If you don’t want to play dress-up that much, you can unlock one Social Network ability pretty early on that unlocks the ability to automatically dress your characters in the most optimal combinations according to certain specifications (well-rounded, highest attack, highest defence, and more).

Still, it’s worth mentioning that clothing only affects the stats of your characters. They don’t actually appear on your character’s models, so that’s a bit disappointing.

Look At Your Characters’ Reactions Before Buying Them Food 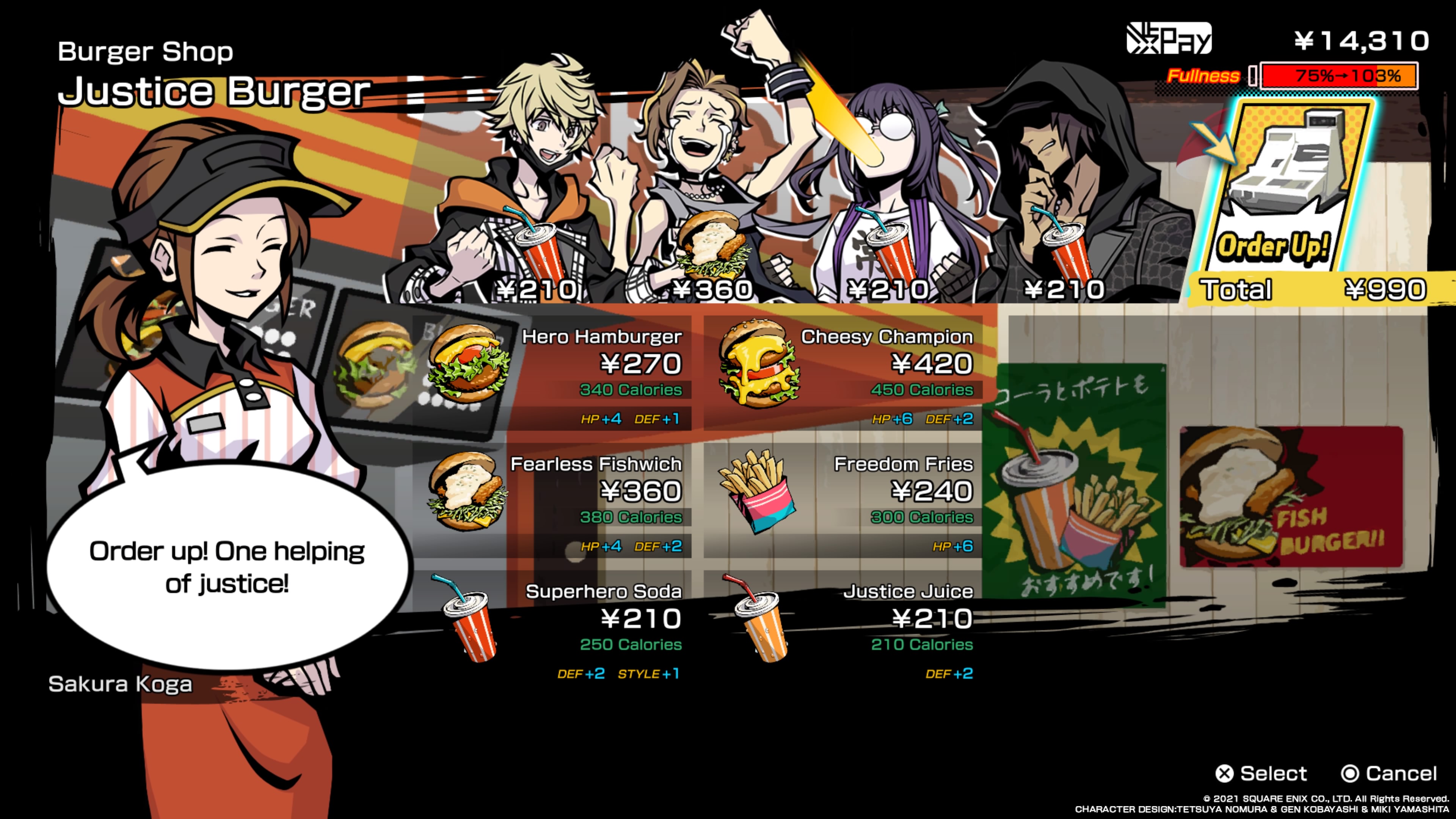 These are their most excited reactions.

When choosing what food to feed your characters, observe their reactions. EachÂ character has three different reactions when ordering: unhappy, happy and enthusiastic (in increasing and improving order of excitement). The game doesn’t actually tell you which reaction is which, but you can probably guess which is which, especially if you watch a lot of anime. It’s best to make sure their reactions to a particular food is enthusiastic, which has the highest chances of adding a Tasty Bonus. The Tasty Bonus adds extra stat points.

Feature,Main page
Octopath Traveler Guide: How To Be Well-Prepared For This JRPG Epic

This feature is still under development, as the game is just out. Don't act too shocked: the latest game from the Bravely Default devs is knee-deep w...

News
Sony Buys Evo; Next Tournament Is This August