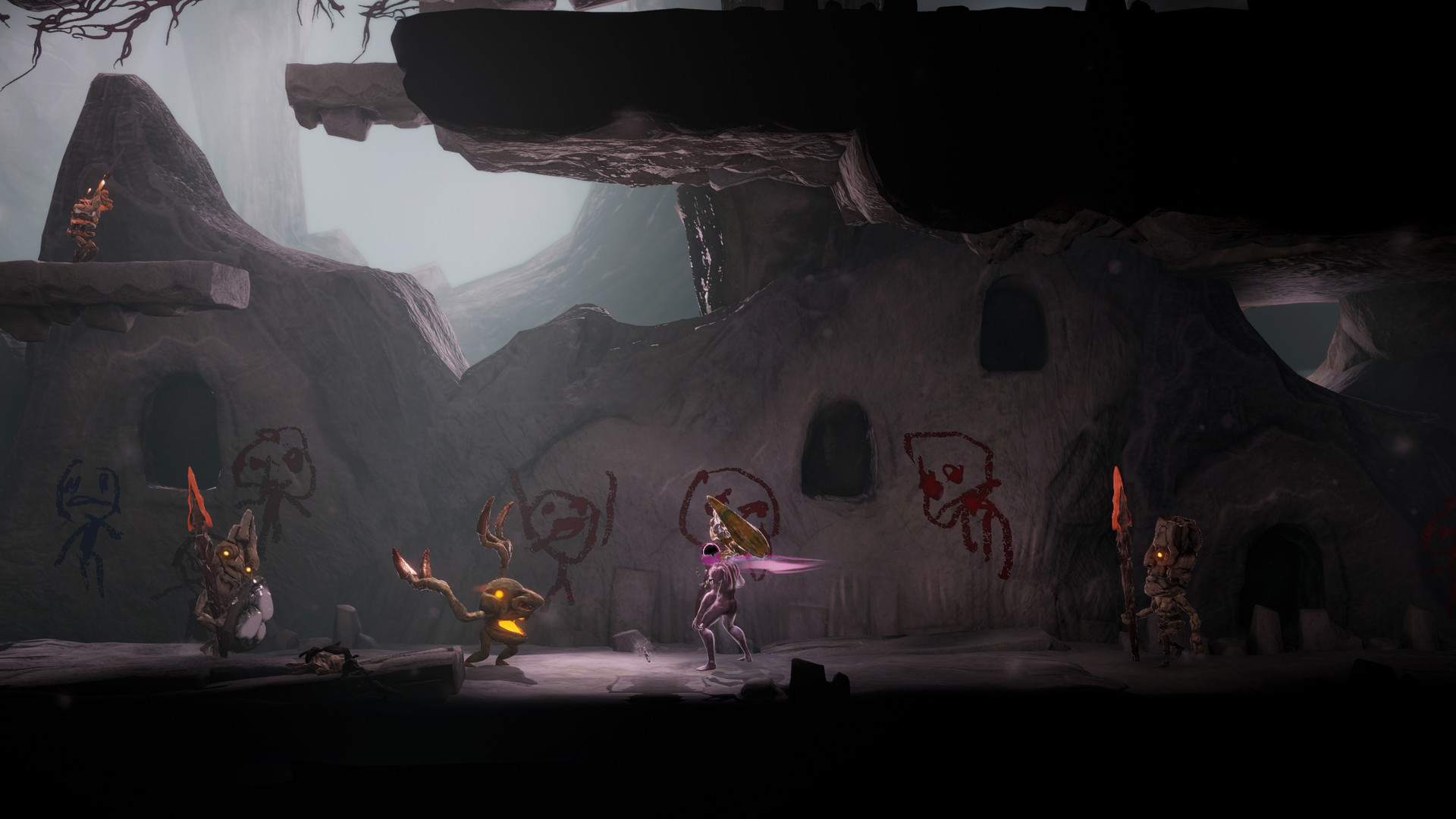 Just when you thought games couldn’t get any more creative and weird at the same time, along comes an oddity like Grime.

The game starts with you literally being born into an alien world where everything is a mesh between stones, rocks, neurons, flesh, and everything in between. The world of Grime is very unique with its purposefully gritty palette and dark fantasy aesthetics as your main character finds purpose in slaughtering things in its way, with a pretty vague plot thread to work with.

The melancholy and dreary soundtrack and sound effects also add to the dark charm this title offers. I’m honestly getting a lot of The Neverhood, Psygnosis cover art, and 90s Peter Gabriel claymation music video vibes here. You won’t be experiencing this kind of surrealism in other games for a while, at least for this year.

But what of the game? Grime is a 2D action-adventure game in the veins of a Metroidvania title; you explore, find the objective to your current quest of answers to your existence, and kill a good amount of bosses or two.

When you fight enemies at first, you have to use the game’s Absorb mechanic; it’s a parry and counter all in one. When they attack you at the right time you press your Absorb move, you kill them and drain their essence which you can use to heal yourself or build up Ardor, which increases the amount of mass gained from defeated foes.

Killing bosses also open up your world-exploring skills. You can gain the ability to pull things and platforms your way, airdash, and so forth. Hunting down regular enemies and killing enough of them will net you new skills you can allocate Hunting Points too (ie: Grime’s skill points). These range from either buffing up your HP and stamina to making your dashes and evade hurt.

Grime’s combat and platforming challenge does tread that fine line between tough and gamepad-breaking frustrating, with fights coming in close and rewarding you for being proactive with exploration. Most of the enemies here will make you pay attention to telegraphs and perfect your evades and absorb techniques while you dish a few swipes of your own; you’ll die countless times but you’ll get the hang of it eventually.

Having said that, the game does get a bit cheap and unforgiving in later areas though; half the time I keep getting red un-parry-able attacks thrown at me from off-screen, and coming at super-fast speeds. The final few bosses can flat-out kill you with one to two hits and with surprise bulls*** mechanics.

The technical bugs here and there do not help; just when I thought I beat a nail-biting combat and platforming segment, it just plops me back to a hazard I’ve been avoiding before the game just flat-out kills me and makes me go through that final arduous segment all over again. Also, the hit detection for some of the attacks are all over the place; it’s as if the developers are purposely emulating the From Software school of making boss attacks hit wider than they look.

Between A Rock & A Very Hard Place

Part of the added aggravation is also the designer’s smart idea to have all your major actions drain the stamina meter a significant amount. Even with the levelling up you do, it still feels like every action you take can limit you. This attrition-based design makes an already difficult and janky game all the more frustrating later down the line. Also, some later parts of the game get so dark and dank that you can’t see traps & enemies until it’s too late.

Still, kudos to the developers for at least giving us a few forgiving platforming segments that let you restart at the last ledge you’re on.

Grime is a very unique-looking game set in a weird-as-hell creationist-themed world that’s sure to be divisive among gamers. It has some fun rock-solid moments, but the game is clearly trying to be Dark Souls with 2D and platforming when it should have just emulated how other 2D hardcore titles like the Ori series handle difficulty and fairness.