Halo Infinite and its first-person shooter multiplayer PvP gameplay remind us why it’s good to go back to basics, albeit with a lot more sprucing up to make it fit this generation. Because what isn’t broken doesn’t need much fixing. Just a good number of tweaks and additions that makes sense.

In this iteration of Halo’s PvP mode, you team up with a bunch of other Spartans and go online fighting 4 other Spartans in either Slayer (kill for points), Capture The Flag, and other multiplayer modes involving points, scoring, and the occasional bloodshed. Big Team Battle is the 24-player version; more players, more kills/problems to deal with, and a ton of vehicles for the wide-open space maps.

The majority of the maps here are symmetrical to a point, but they have memorable landmarks and layouts, ranging from the pathways and centre area of the Bazaar to the jump pads and sniper alcoves of Behemoth. You’ll find your favourite map within a couple of sessions; the settings for PvP are both laced with quality and quantity. We won’t be starved for newer maps anytime soon with these choices. 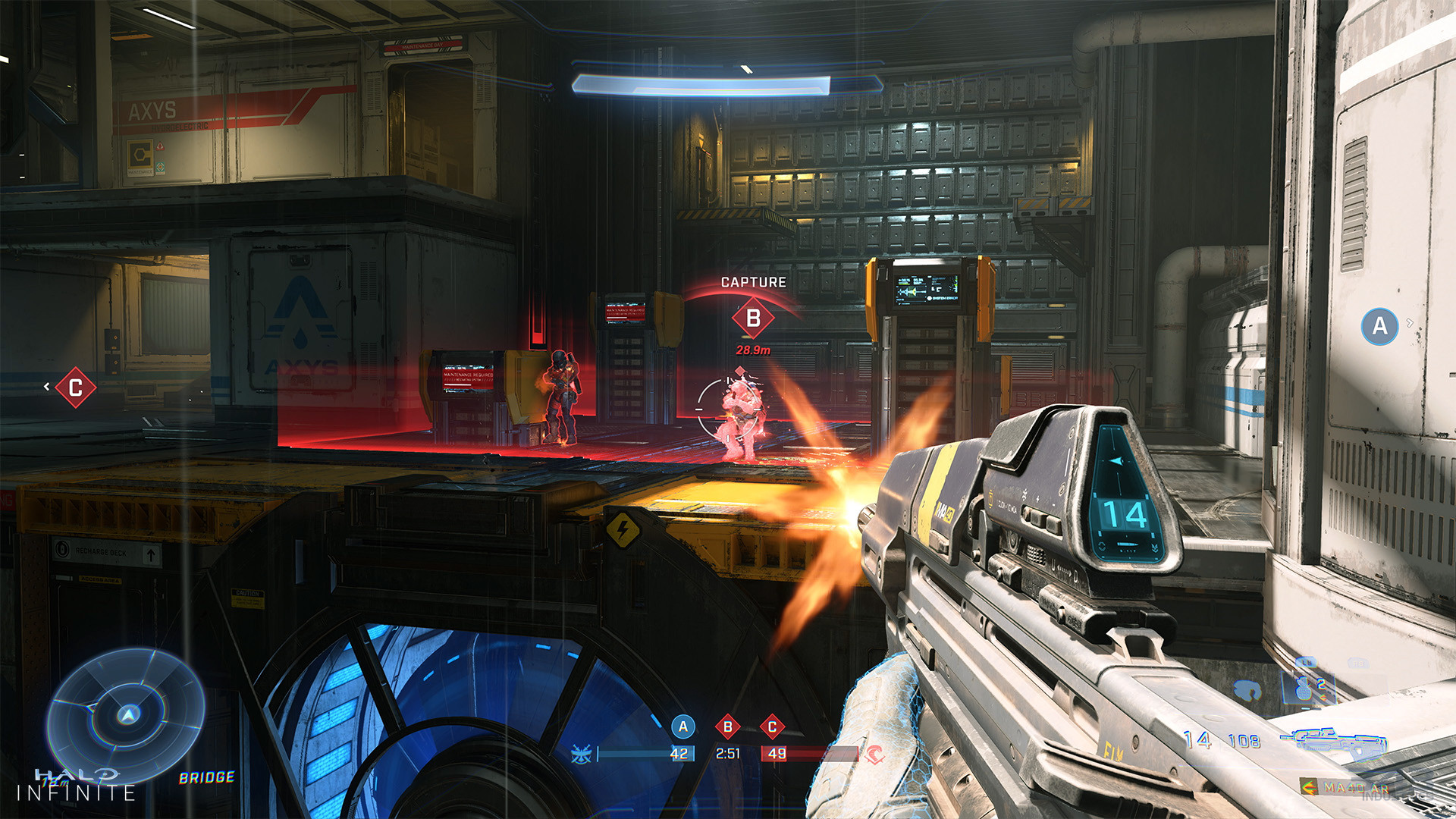 And it’s not just the maps; the guns you get to use range from oldies to newfangled oddities. Familiar weapons like the Assault Rifle and handgun/Magnum get the tweaks and balances they deserve so that they are the best starting weapons for default multiplayer modes. Old favorites like the Battle Rifle also has some much-needed upgrades while some long-missed weapons like the Gravity Hammer will make Halo 3 veterans squeal with glee, albeit with some changes that you’ll need to get used to.

New weapons include the Sentinel Beam which drains shields super-fast with its beam attack and the Heatwave which covers vertical and horizontal targets just fine and has bouncing shots; perfect for enclosed spaces. The game also has an equipment system where you can use items with a limited amount of use. This means having access to awesome tools like the Grappling Hook and Repulsor. The grappling hook not only pulls you towards ledges but also onto targets to close distances. You can also use it to grab weapons from a good distance. I love having the plasma sword with the Grappling Hook to cover distances for my one-hit kills from behind. Conversely, there’s nothing quite like sweet justice as to push sword-wielding idiots and live grenades back and away from you with the Repulsor.

Vehicles are another Halo staple that cannot be overlooked. Despite being barraged by a rogue Banshee or enemy Wasp, Spartans on foot never feel as helpless. No longer limited to just peppering them with your assault rifle, you can now choose to either hijack them with your grapple gun, disabling them with a Dynamo Grenade, or just snipe at the pilot out of the sky with a well-timed Skewer. There’s always more than one way to skin a Banshee.

For those coming from a host of more recent and twitchy shooters such as the Call of Duties of the world, Halo Infinite sticks true to the Halo formula. Unlike that series, gunfights aren’t decided by who shoots first, but rather, benefits those who manage to effectively incorporate the intricate dance of bunny hops and crouches, well-placed grenades, obtaining superior positioning and effective team play. I’m not saying 2v1s are impossible to pull off, but they require more finesse and advanced planning.

There’s a ton of variety weapons-wise, and you can even drop them for your allies if needed. Simply put, Halo Infinite’s multiplayer arsenal is fun to use, seems balanced so far, and makes all your Slayer/Big Team Battle matches a hoot. 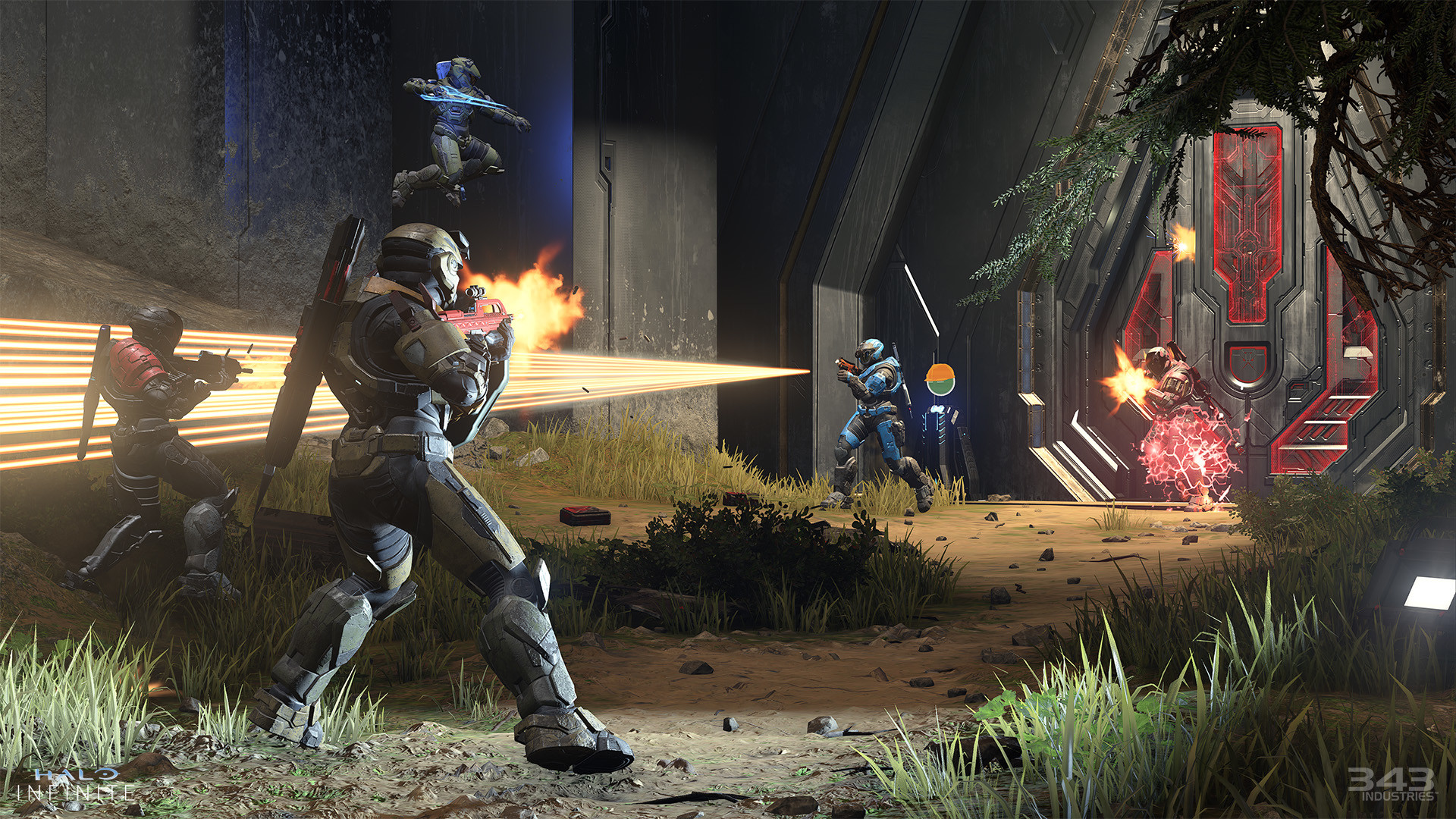 The only major gripe to this shooter mana from heaven is its progression system. I understand that Halo Infinite’s multiplayer is a free-to-play game, and some payments need to be made for additional rewards via its battle pass, among other cosmetic things. However, the progress and levelling up for this bit can be a bit slow for myself and others, especially if you feel like you aren’t going anywhere even if you had 10 matches or so. You can still beat the system with a few bot matches and co-operative players online, but still, players shouldn’t be going through excessive measures just to level up in multiplayer and get a few extra colours and cosmetics.

Speaking of cosmetics, in its current state, we only have access to three armour cores or ‘styles’ – Mark V as worn by the Spartans in Halo Reach, Mark VII armour which is the most recent iteration and the event-tied, Samurai-inspired Yoroi. Each of these cores has a number of customisable armour pieces and coatings which are specific to a particular core. The overall customisation does feel a bit limited compared to older Halo games, but still enough to ensure no two Spartans are 100% identical.

Halo Infinite’s multiplayer modeÂ is a great way to get everyone on board the shooter if they have an inkling of love for the multiplayer PvP FPS genre. It’s fun, familiar-yet-new, and its gameplay modes and maps are a blast to play in. Even if its progression feels very long-winded, it IS a free-to-play game, so we’ll let that slide. It’s hard to believe that it took this long for another revered shooter to take the fair-yet-balanced payment route; whatever audiences it gets, it deserves due to its solid and well-tuned shooter gameplay, controls, and overall fun factor.

Besides, what else are you going to play for your online shooter fix: the still-broken Battlefield 2042 which you had to pay more than full price for to get to its Early Access? Or the “same old, same old” nonsense that is Call of Duty: Vanguard? Just do yourself a huge solid and make yours Master Chief.

Reviews
Is The Remastered Kingdoms Of Amalur Worth The Re-Revisit?

Platform(s): PS4, PC, Xbox One Genre: Action RPG from a now-defunct company, remastered It's rather sad that the 2012Â  action RPG Kingdoms of A...

Analysis,Feature
Tanks Lead the Way As Wargaming.net Continues To Trailblaze the F2P Scene

Wargaming.net's World of Tanks (WoT) is easily and by far, the best-looking free-to-play game in the market at the moment. With high quality graphics ...

Keeping to tradition with online Blizzard game launches, the company's latest remaster of Diablo 2 is not experiencing a smooth launch. In fact for th...