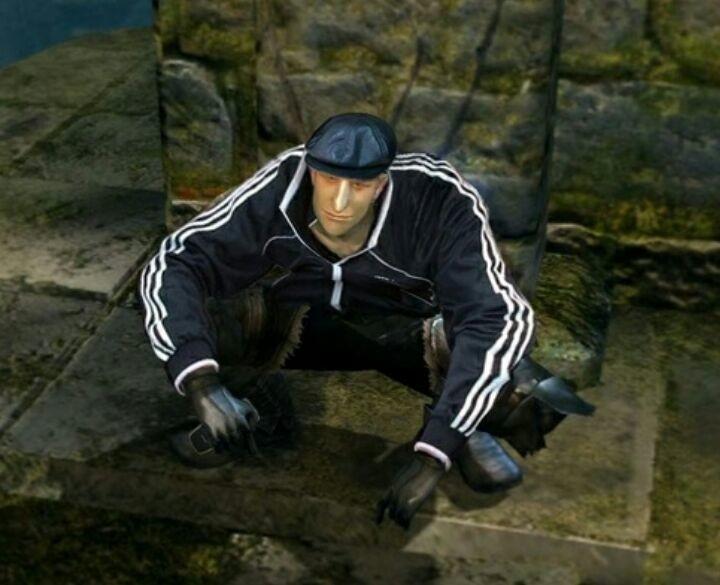 With Elden Ring coming out soon this month, let’s take a look at one of the most consistent elements of the From Software dark fantasy-laden Soulsborne games. No, I’m not referring to the difficulty. I’m talking about the character known as Patches.

Patches has been a staple in the SoulsBorne series just as much as the Estus Flask, appearing in almost every game that was directed by Hidetaka Miyazaki. He/it is a notable fan favourite that you can definitely trust and will absolutely never push you off a cliff.

After not appearing in the games since Dark Souls 3, we highly expect that the bald, squatting scavenger will make his way into Elden Ring in some form. So in anticipation of the latest entry, hereâ€™s a brief rundown on the history of Patches throughout the SoulsBorne series.

We first meet Patches the Hyena in Demon Souls at Stonefang Tunnel, on a wooden platform standing rather suspiciously next to a Bearbug enemy hanging over an item pickup. He is clothed in a simple leather armor get up, holding a spear and a tower shield in hand. A look that he carries for most of his appearances. Interacting with him will cause him to tempt you to the treasure, offering it as a gesture of goodwill and friendship.

The treasure will obviously be a set up for a trap, as approaching the item will cause the fires-spewing Bearbug to drop down and block your way. Patches will then scurry off and taunt you, saying that the treasure is yours so long as you survive that is. Killing the enemy allows you to walk up to him to which heâ€™ll be shocked to see you survived. Heâ€™ll play it off as an accident and gives you a ring as a sorry gift.

The next time you see him will be at the Nexus, the player hub, acting as a merchant. He claims to have given up the trickery and his thieving habits. However, you meet him again at the Shrine of Storms in a cavern. As you walk into the area, youâ€™ll notice a trail of shiny stones laid out, an item you can drop down to mark a path, which will lead you to Patches again. Heâ€™ll be standing next to a pit, then heâ€™ll promptly do the same set up as you talk to him. Thereâ€™s treasure for you in the pit, itâ€™s all yours he says. Standing next to the pit will trigger a cutscene where he kicks you into it. Escaping the trap and confronting him will cause him to carry out his old schtick again, but it nets you another useful ring.

You meet Patches at the Catacombs. Heâ€™ll be standing next to a lever and a bridge. Interacting with him causes him to ask if youâ€™re a cleric or not. Both answers trigger the same outcome, but his line delivery is more sinister if you answer yes. Walking across the bridge halfway, youâ€™ll find it will overturn and cause you to fall to your death. Confronting him again makes him play the same trick but he gives you a soul in exchange.

He will then be found at the Tomb of the Giants, overlooking a cliff with a similar trail of shiny breadcrumbs. He will tempt you yet again, and heâ€™ll trigger another â€œThis is Spartaâ€ reenactment. Confronting him will cause him to beg for forgiveness and heâ€™ll provide a Twin Humanities. Patches can then be found at Firelink Shrine, acting as a merchant again. However, if youâ€™re of the cleric class heâ€™ll be furious and ask you how you survived, then promptly attack you.

After unlocking the Forbidden Woods Patches can be talked to at any interactable door in the game, signified by the red lanterns by the doors. He will then give you directions to a cathedral, boasting about a godhead that will grant you strength. He will then provide you with a key item, the Tonsil Stone, which cannot be removed.

Heading to the place, you will reach a locked door which then a glowing blackhole will attack you, which grabs you, carries you up, then crushes you to death (Youâ€™re in the know, right?). Respawning takes you to the Lecture Hall, with a door opposite you. On the other side is Patches who you can talk to, with cracks on the door showing off his head, but also he looks oddly different this time. He will then taunt you to fight with an Amygdala, proclaiming it to be his god and that the player characterâ€™s death is certain.

But itâ€™s not all so bad as it allows you access to an endgame area, way before you should be able to. The Nightmare Frontier is where you face off against the Amygdala boss fight, but before that, you see another trail of shiny coins leading to an item. Surprise surprise, Patches will then push you off, landing you in a poisonous pool full of these tough tentacle monsters.

You can find your way to the back of that door to reveal a grotesque, oversized spiderâ€¦ with Patchesâ€™ head. Patches will then panic and beg forgiveness, as usual, and will offer you a gesture. He claims that it was nothing personal, and he was only worshipping his god the only way he knows, rather contradictory to his previous faith-hating appearances.

Patches plays a more breakthrough role in the game, being a vital player to two other NPC quest lines and having his own shining moment in The Ringed City DLC.

You have two ways of being tricked by him this time: Buy the Tower Key and get locked in behind you by Patches, or go through another bridge trap, only this time heâ€™ll be wearing the Onion Knight armour set and doing a hilarious Siegward impression. Both events will cause him to ask for your forgiveness and he becomes a merchant at Firelink Shrine, you know the deal.

To save the lovable Greirat from dying in his questline (protect him at all cost!), you will need to inform him that Greirat went to Irithyll, which will cause him to show concern rather surprisingly. Patches owes a debt to Greirat, to which he will don the Onion Knight armor again (assuming you havenâ€™t returned it to Siegward) and save his life.

In the Ringed City DLC, you come across Lapp, a fellow hollow and amnesiac knight. He shares a familiar voice with a certain someone, yet he seems honest and kind, if a little confused. He informs you of a Titanite Slab, the endgame item for weapon upgrading, near the area with the angels but oddly warns you of the danger and asks you to be careful.

In fact, if you choose not to take the risk, you can find Lapp again later and heâ€™ll actually have it for you. What a nice guy!

Later on, youâ€™ll find him distressed as he is desperate to know who he was before which puts you on a quest to find the Purging Monument that can cure hollowfication and regain Lappâ€™s memories. After finding the monument, you can inform him of the location to which heâ€™ll emotionally tell you no matter who he is he will always be your friend. Near where you first encounter the dragon Midir, youâ€™ll find a bunch of crumbling staircases, with no way out in sight. Youâ€™ll then find Lapp, squatting down next to a cliff. Uh oh.

Talking to him shows that he sounds completely different and sus as hell. Heâ€™ll offer up a treasure as thanks for helping him, which is right over that cliff. You know how this ends.

However, the path ahead actually leads to where you need to go, so Lapp/Patches was helping in a way. Maybe he did keep his promise.

That about covers every version of Patches across the years. What do you think heâ€™ll appear as in Elden Ring? In the meantime, have a look at the gameâ€™s robust character creation.