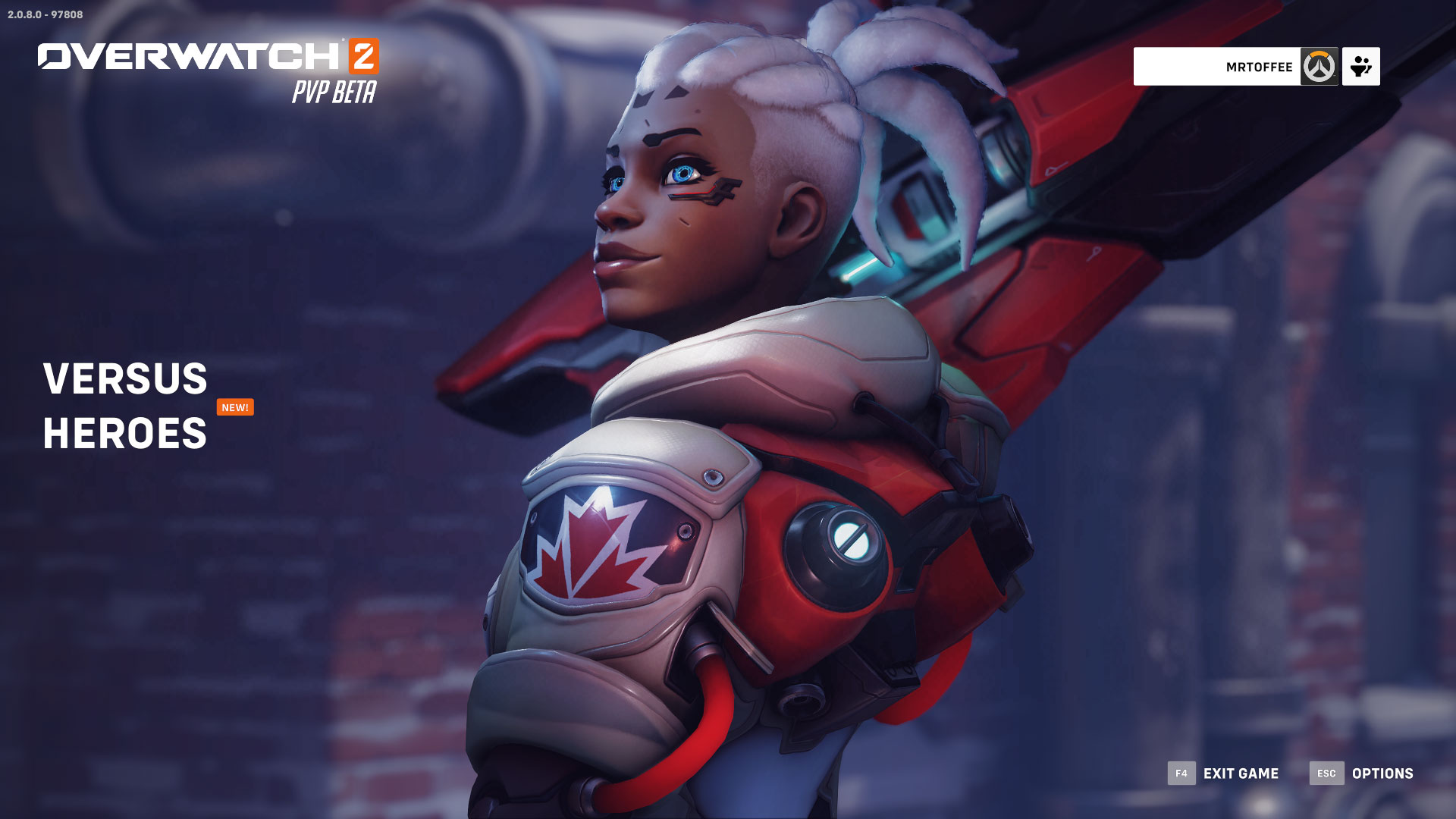 Don’t call it a full-fledged sequel to the 2016 hit multiplayer shooter just yet: Overwatch 2 right now feels like a transitional game than anything, as far as its beta form is concerned. With that in mind, I had a blast playing through hours of online matches. Keep in mind that this is just the second half of a promised sequel, since the beta only includes content from the PvP side of things.

New KidS On The Block

The most obvious new additions that’s available are the new hero Sojourn, the Push mode, and a new map called the Colloseo.

Sojourn herself is a Canadian cyborg who has a nifty new “beginner” mechanic: she has a rapid fire primary attack that builds up energy, then unleashes said charge in the form of a powerful railgun shot. The latter has great instant hitscan and can one-hit kill foes if the charge is 100%. She also has a nifty movement tool and escape skill in the form of her Power Slide. You press and hold Left Shift to slide fast and also be in a low profile, meaning you’re harder to hit. Pressing the spacebar while you’re sliding will make you jump higher than usual; you can get onto hard-to-reach vantage points from this. You can also run away from a heated situation and get some distance between you and enemies with the Power Slide/Jump combo.

In addition, she has a Disruptor Shot that hits a good AoE section that slows down and deal a bit of damage to enemies within the sphere. Her Ultimate lets her autocharge her Railgun automatically which means a barrage of Railgun shots for a short period of time. These shots also can pierce through enemies; perfect for downing a team’s Tank and hitting anyone behind that team member.

It goes without saying that you will need to have proper aim when using her Railgun. Shooter fans new to Overwatch who love to be rewarded for accuracy and offensive play will find her to be the perfect go-to Hero.

Characters and playstyles like hers can help bring in more people who love shooters and need more options for standard characters who cater that playstyle. That being said, I doubt I’ll be maining Sojourn anytime soon. I’m the kind of guy who likes his AoEs and explosions from his primary fires, so it’s Junkrat for me.

The new map Colloseo help round things up especially with the new mode Push. In this mode, you have to fight for control over a robot in the middle of the field. The robot will head to the enemy spawn location, pushing a barricade along the way. If the barricade goes all the way to the enemy team, your team wins and vice versa. It’s basically Overwatch 2’s version of tug-of-war, with some Control FPS mode thrown in.

Just like with all Overwatch modes, teamwork and co-op tactics play matters since you can’t do jack doing it solo. The mode itself is pretty fun and seems to be the only mode that garner me faster matchmaking results than any other mode in the beta. The fact that I can multitask between roles, with Support being the fastest for queue times, helps the process.

Speaking of which, the new role dynamic and the 5v5 player count adjustment helps make matches feel a lot tighter and faster. Less people in the room means quicker ways to down a whole team.

To recap the class updates & changes, Tanks suffer less pushback than the rest of the classes. DPS roles move faster than the rest of the cast, and Support roles can regenerate their own health automatically. In a way, Support can retreat and regen their health, and can at times be tough nuts to crack. In fact, the only reason my team gets more wins than usual in unranked matches is because of my perseverance in staying back as a Support like Zenyatta while letting my more talented Tank and DPS teammates take lead. This makes Support more priority targets than usual in a team match, especially if it means dealing with a Support with better-than-usual mobility like Mercy.

Certain characters too get some role adjustment and major changes to their part 1 playstyles. The most noticeable ones include Doomfist being a Tank and Orisa having her kit revamped. The former still retains his DPS playstyle, but trades damage for defense with his new Power Guard move that replaces some of his more aggressive options. Orisa now has a few attacks involving her new Javelin and a new AoE Terra Surge attack, but her Protective Barrier, Halt!, and Supercharger Ultimate are gone. That’s great news for many of us who feel that Orisa is a tad underwhelming when compared to the rest of the more fun-to-play Tanks, myself included. Her new moves make her more involved in the fray rather than half-assing both defensive and offensive playstyles, excelling at neither.

Even Sombra herself gets a helluva rework for her kit. Her Hack now reveals enemies through walls so your teammates can prepare an ambush, and it also makes the hacked target take more damage from Sombra. Her Ultimate also deals 40% damage to enemies caught in the pulse’s radius in addition to disrupting barriers big and small. She’s just more of a pain to deal with than before, come to think of it. My keepaway Junkrat and Zenyatta tactics are usually disrupted because the enemy team’s Sombra knows how to use her new kit and buffs, forcing me to relocate to a new vantage point moreso than usual.

Point is, these shakeups and changes help keep the experience fresh. I have yet to play through the entire cast though, but everyone’s new gameplay changes seem to be leaning towards being better than disruptive for the sake of being so.

It’s safe to say that with the many hours I’ve put into the beta, Overwatch 2’s PvP is looking solid.

The new interface and UI updates are better to look at and communicates info better; I dig having small icons to remind myself who is getting the blue and red orb when I’m Zenyatta, for instance.

While you can’t say that this is a full sequel yet, it does get the job done in showing significant improvements to a game that needed it during its 7-year run. Is this the jump-start the series needed? Perhaps, but it’s too soon to tell and we need to play the other majority of the game when it’s ready god-knows-when.

At the very least, the multiplayer update and character changes are warranted and worth a revisit if you haven’t played the game for eons. The Overwatch 2 PvP beta is available now; invites are sent out randomly, so you can try your luck here until mid-May.

[…] Overwatch 2 is out now in beta form; if you fancy some 5v5 PvP competitive esports level gameplay, you’ve come to the right shooter. […]

by The Return Of The Overwatch League: What You Need To Know About 2022’s Major Esports Tournament | KAKUCHOPUREI.COM in May 11, 2022
Reply