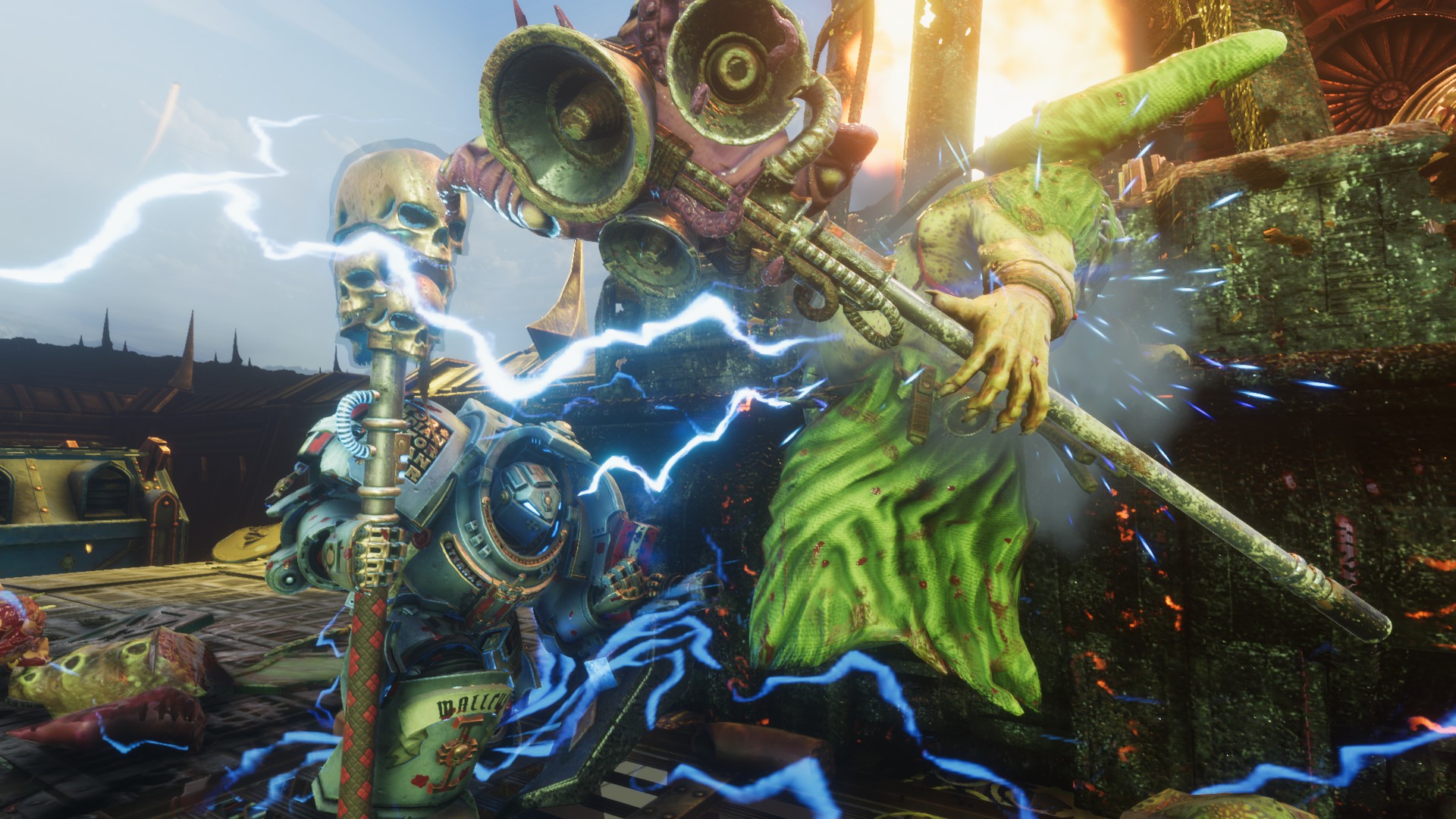 This year seems to be the year of major Warhammer games, what with the release of Total War Warhammer 3 earlier this year, and now, Warhammer 40000 Chaos Gate Daemonhunters (now that’s a mouthful!).  As someone with more than a hundred hours of experience playing the XCOM games, this latest game set in the Warhammer 40K universe plays a lot similarly, albeit with its own twists and differences.

When They Say “Chaos”, They Mean Chaos

The biggest question on everyone’s minds, especially XCOM veterans, will probably be how hard this game is. After all, XCOM is notorious for its punishingly hardcore difficulty. Well, Warhammer 40000 Chaos Gate Daemonhunters definitely lives up to being an XCOM-like. Even at Standard (normal) difficulty, the game is freaking hard, and you’ll be save scumming your way to surviving the disgusting hordes of the Chaos God Nurgle.

Besides that, there’s a lot of similarities here, right down to how game progression works. If you’re an XCOM veteran as well, you’ll jump into this quick, despite there being an overwhelming number of mechanics to keep track of from the very beginning. Just like you’re in charge of a mobile HQ in XCOM, this time you’re the commander of a battleship called the Baleful Edict. It works in pretty much the same way. Each sub-menu represents a different section of the ship, each of which has a different function and a different person in charge who you interact with. For instance, Inquisitor Vakir leads the Libris Malleus, which is where you start new research on Grimoires (which takes in-game time and specific resources to complete), each of which comes with their own perks and benefits.

You’re also in charge of moving the Baleful Edict across the galaxy to different planets where missions will pop up. However, you’ll have to choose and pick carefully, as the ones you don’t get to in time will get increasingly corrupted by the Bloom (Nurgle’s plague). This feels similar to country panic levels in XCOM Enemy Unknown/Within or the Advent Avatar Project timer in XCOM 2. You simply can’t save everything all at once, so it’s all a balancing act. Some planets will get increasingly infected by the Bloom if you ignore them, and missions on them will only increase in difficulty with each infection level.

During battle, your Grey Knights can perform Melee or Ranged attacks, perform Overwatch to automatically attack enemies who come near them (which works in a similar way to XCOM), increase defenses to brace for attacks using the Aegis Shield, and other abilities. Unique mechanics in Warhammer 40000 Chaos Gate Daemonhunters include the Warp Surge during missions, and Willpower. Every Knight has Willpower resource that can be spent on psychic abilities like more damage during attacks or healing team members.

However, using Willpower has its drawback, because every time you use Willpower, it makes the Warp Surge meter build up faster. Despite not having RNG elements, the Warp Surge makes battles in Warhammer 40000 Chaos Gate Daemonhunters a lot more frustrating than they actually are. Once the Warp Surge meter fills up, a random negative event will happen, including spawning enemy reinforcements from a rift portal, giving debuffs to your Grey Knights, giving buffs to the enemies (like goddamn 5+ armour or increased attack), and more nasty stuff. The worst part of it all is that the Warp Surge meter will immediately start filling up again after it has completely filled up. This means that you won’t be able to stop worrying about the Warp Surges and you’ll be pressured to finish the mission as fast as possible without using too much Willpower.

All of that leads to what is perhaps the single biggest problem and issue in Warhammer 40000 Chaos Gate Daemonhunters; the balance. Juggling everything and planning your strategy is hard enough, but it’s annoying when the game increases the difficulty by resorting to overwhelming the player with hordes of enemies. Look, it becomes ridiculous when suddenly 50 more enemy reinforcements spawn out of nowhere via the Warp Surge. That’s not challenging; that’s just unfair. It makes planning or strategizing redundant when enemies could just call in reinforcements out of the blue. It’s not fun when you have to scrape by every mission and failing because of random circumstances, especially so when one mission can take as long as 45 minutes to an hour to finish (and that’s early game!)

As hard as XCOM can be, Warhammer 40000 Chaos Gate Daemonhunters starts off by leaving you off the side of a cliff. Balancing is way off. The difficulty curve is extremely high from the beginning, and it only gets harder when you have to put a band-aid on everything. Many Warhammer fans are complaining about how lore-breaking it is that the Grey Knights feel so weak in this game, and as someone who’s a Warhammer noob, I can attest to that. These hulking brutes with Jean Grey psychic powers can’t withstand a few shots from a disease-plagued zombie? That’s immersion-breaking right there. Also, it apparently takes forever for a Grey Knight to completely heal from a “light wound” (getting damaged in missions will lead to Grey Knights suffering from debuffs or unusable in battle, depending on the amount of damage and what status that results in).

Last but not least, the game also suffers from performance issues. My laptop has decent specs and it quickly overheats when playing this game. That’s weird, especially when I can run more demanding games without any problems. I’m not the only one with performance issues either, as many players have reported experiencing the same FPS drops and CPU overheating despite having powerful rigs.

Lots Of Potential, By The Emperor

Yet, despite all these problems and issues, I still had a blast and enjoyed my time with Warhammer 40000 Chaos Gate Daemonhunters. Most of the issues I mentioned can be fixed with future updates and patches, so they’re really only a big deal right now if the developer doesn’t do anything to change them. If you like XCOM and other turn-based tactical strategy games, then Warhammer 40000 Chaos Gate Daemonhunters is still recommended. The gameplay is solid, the visuals are awesome, and it’s accessible even if you’re not familiar with Warhammer 40K lore.

I appreciate the little details, like random events and dialogues with the characters in the game’s story. Plus, the combat looks cinematic and stylish as hell. I never get tired of seeing the camera zoom in to one of my Grey Knights performing a melee execution on an enemy. Even just throwing a grenade can look epic. One of the game’s highlights is customizing my team of Grey Knights to look as badass as they can before starting a mission (you’ll know how thrilling this feels like if you’ve played a lot of XCOM). The developer nailed on how the game looks and feels; the aesthetics and ambience of it all.

Just one advice before you start playing the game; start at the easiest difficulty for your first playthrough. Trust me, you don’t want to have to abandon an entire campaign after already spending hours and hours with it (like I did for this review).

The Outer Worlds Beginner Guide: How To Kick Butt In Space

Here's What You Need To Run Doom Eternal On PC [Update]