We finally get a look at what Tom Clancy’s The Division Resurgence has in store for us gameplay wise. The post-crisis New York City shooter aims to bring The Division experience to mobile.

The original Tom Clancy’s The Division was released in 2016 on the PS4, Xbox One and PC accumulating US$330 million worldwide in its first five days. Its sequel, The Division 2, came out in 2019 to a smaller reception than the original, but it still has a loyal following who play the game regularly.

The free-to-play shooter takes place in post-crisis New York following the release of a smallpox variant referred to as the Green Point, which kills 90% of people. You will step into the role of the first wave of Division agents — trained field operatives who must remain anonymous — sent into the city with access to weapons and skills found in the previous Division games, although with some differences in the mobile version. The development team aims to have it release sometime in 2023.

So far we know that the touch controls are somewhat reminiscent of Call of Duty: Mobile’s default layout. James Berry, the community developer for the game, confirmed support for Bluetooth controllers is something the development team is working on for the game’s launch. 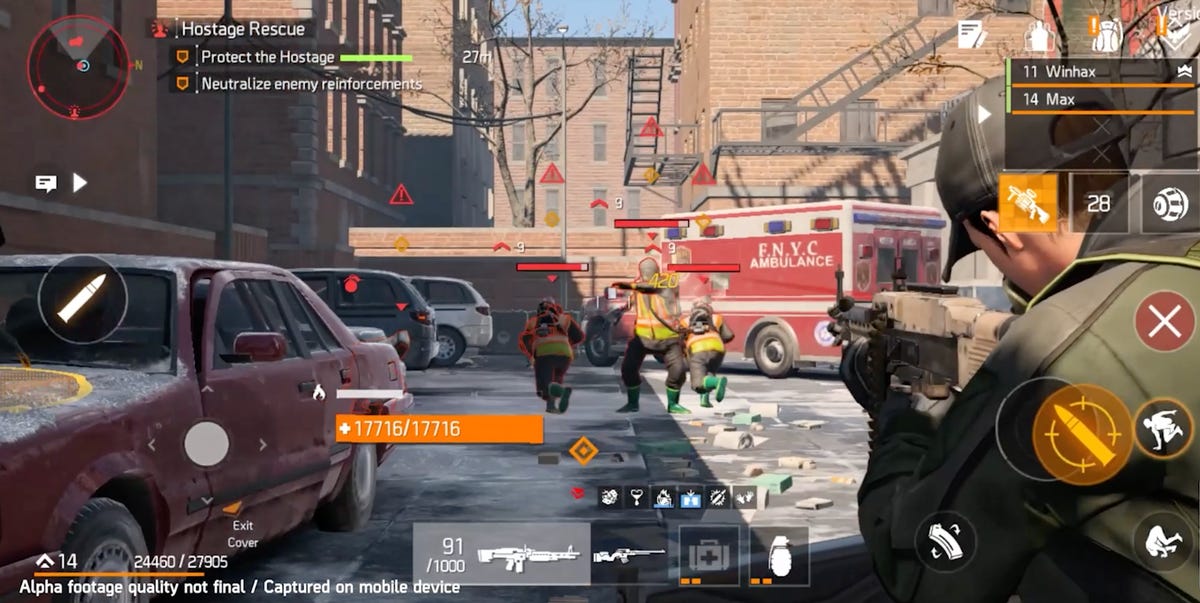 In contrast to its predecessors, instead of being able to mix and match skills and abilities, players will have to select a certain specialisation. Upon the release of the upcoming Resurgence alpha test, three classes of the initial six classes will be playable. The first three are Demolitionist, with access to a turret and seeker mine; Bulwark, a defensive option with access to the ballistics shield and mobile cover; and the Vanguard, who can scan enemies and make use of a drone.

“The idea being we want players to be able, to as a team, find the right mix of specializations depending on their needs, depending on the mission or the activities that they’re playing,”

The base game will take place in Midtown Manhattan similarly to the first Divison game, but Berry stated that more areas of the city will be made available over time. Players will partake in missions and side activities either by themselves or with a team similar to the other Division games.

They’ll go up against different enemy factions including the new group called the Freemen, who make their own weapons and armour. Players will also face escaped prisoners, known as the Rikers, and the cultish city workers referred to as the Cleaners, both of whom were introduced in the first game.

Berry also confirmed the Dark Zone will also be featured in Resurgence but won’t be in the upcoming alpha test. For those that don’t know the Dark Zone’s an area where players fight against enemies as well as each other.

WIth Resurgence being free-to-play, fans expressed their concerns in regards to how much monetisation will be in the game. Espescially with the recent release of Diablo Immortal, it didn’t take long for players to figure out that the game was essentially “pay-to-win”.

Berry addressed that monetisation is an “ongoing topic” for the development team.

The main focus for us is to make sure that everyone can play it on an equal footing. We want everyone to be able to enjoy the game at their own pace with it being balanced between all our players.”

The Division Resurgence will be free when it launches on iOS and Android phones, and the team will release a list of hardware that can run the game sometime before launch.

David Warner, an actor who has starred in films like Titanic, Omen, and Tron, has died. He was 80. The actor passed away in Denville Hall due to a ...

News
This New Zowie Gaming Monitor Can Improve Your Aiming; Here's How

BenQ's Zowie has launched their latest ZOWIE XL-K generation gaming monitor with the new XL2746K with specs that are said to improve your aim. The qu...

It's no secret that most developers and workers in big triple-A companies want to branch out on their own. Such is the case of Adam Doherty, a former ...