We’ve been looking forward to Malaysian developer Passion Republic Games’ GigaBash for years now, ever since we had a hands-on experience with the locally-made game at Level Up KL 2019. GigaBash is probably the biggest and most high-profile Malaysian game since 2020’s No Straight Roads and it’s finally here. This is Passion Republic Games’ debut original title, but they’re no newbie in the games industry. They’ve contributed to the development of many successful games from the recently-released Stray to the PlayStation exclusive Ghost Of Tsushima.

Did it live up to its kaiju-level hype? Or is it a monstrous failure?

War Of The Titans 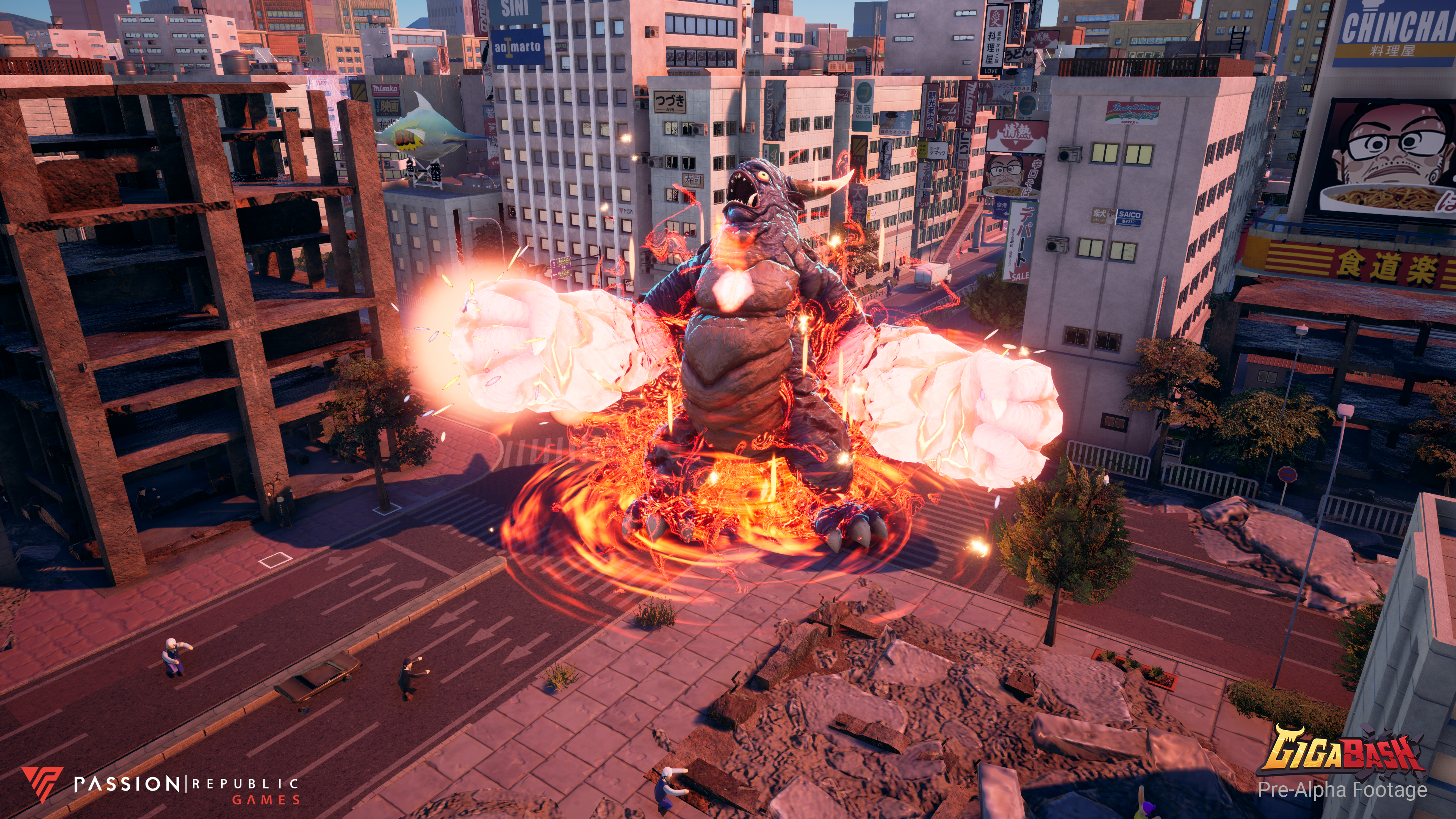 What is GigaBash? GigaBash is an arena brawler featuring four players as giant monsters inspired by classic kaiju battling it out in cities and exotic places around the world. If you’ve ever played the underrated 2003 game, War Of The Monsters, or any of the myriad Godzilla brawlers during the PS2 era, you’ll be right at home and familiar with GigaBash.

There are seven playable Titans (what the kaiju are referred to in the game) on the roster when you boot up the game, including a mecha, an adorable ball of wool, a lava monster, and an alien-looking monster with pincers. There are three additional Titans that you can unlock by playing the Story Mode, which brings the total to 10 playable Titans at launch. That’s not bad, considering that all of the Titans are original monsters and not based on any IP, though fans of the genre will definitely instantly recognise some of the inspirations behind their designs. 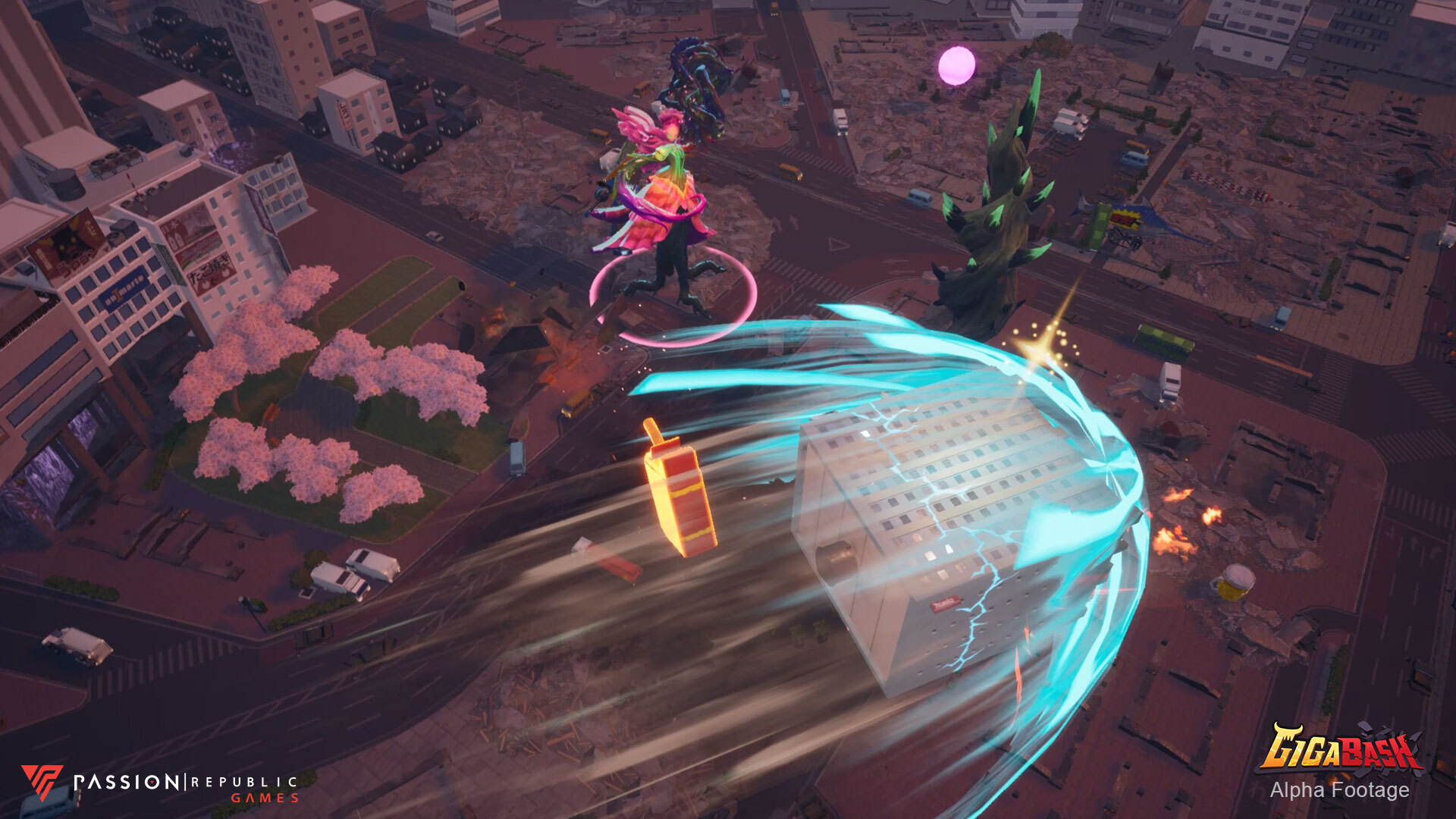 The Story Mode is divided into the narrative of four different Titans, with multiple chapters in each. The narrative is mostly told via animated motion comic cutscenes, but there are snippets of in-game engine cinematic cutscenes during certain parts (usually just before and after a battle). There are four difficulties to choose from but even on the Balanced (read: medium) difficulty, the game can be surprisingly challenging.

Despite this being a brawler game, you can’t just button mash or spam to victory every time. In some cases, you can (and totally should), but the enemy AI is unforgiving and aggressive even on Balanced.

Kudos to the programming team for making the enemy AI smart enough that they block or stay just out of reach when you charge up an attack, and they even grab you if you just keep blocking.

Though the controls are simple enough to understand even if you don’t play the tutorial, you need to utilize the game’s mechanics to win. Besides the normal attacks (by pressing X or Square), charged attacks (by holding down any of the attack buttons), and special attacks (by pressing Y or Triangle), the game also has block attack moves (press the block and any attack button simultaneously) and dash attacks (press the dash and any attack button simultaneously). You have to learn which move is most effective at any given time. 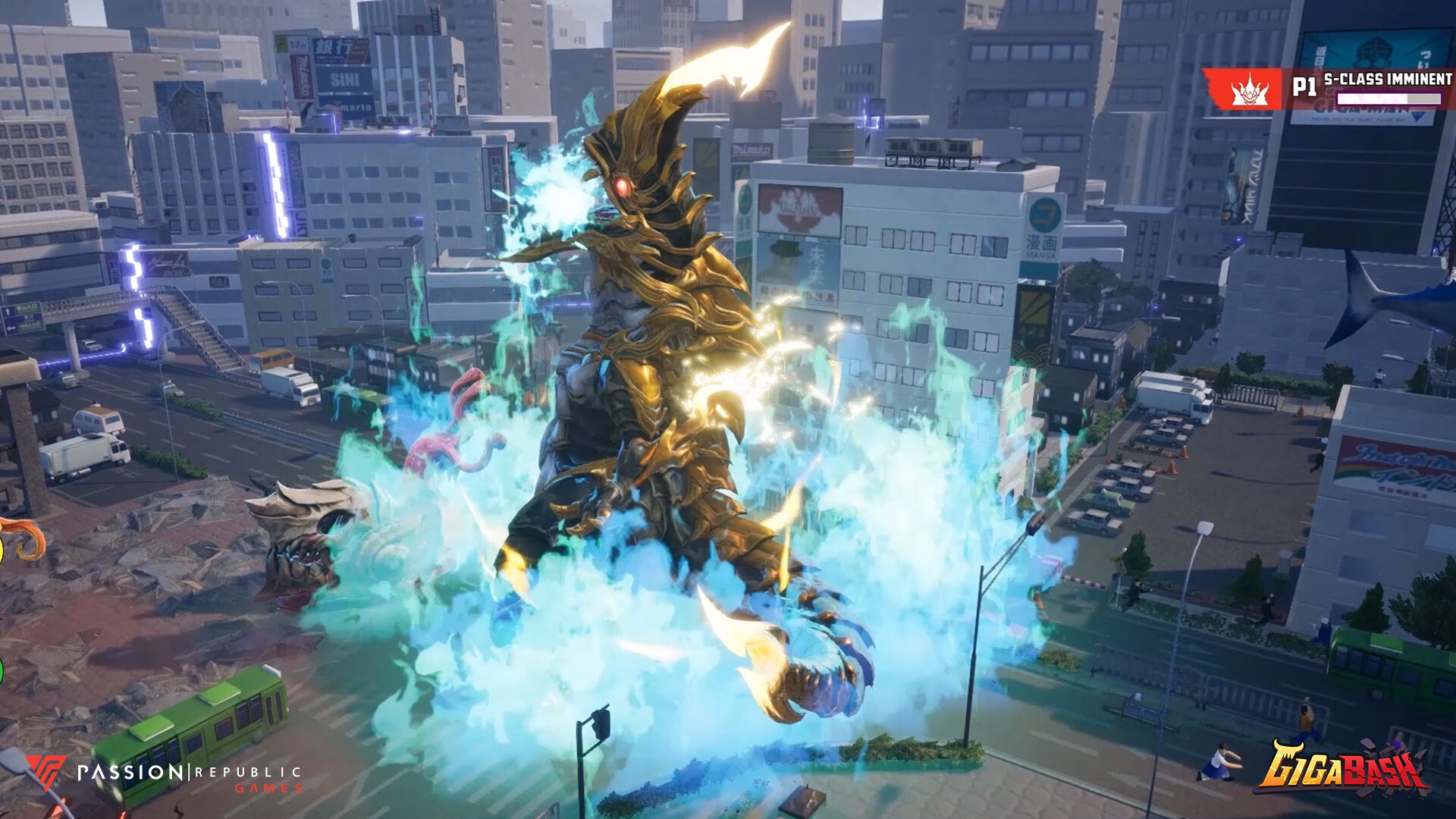 GigaBash also features a stamina system or sorts. There’s no stamina bar or anything, but spamming dash will tire your Titan and blocks can be broken by repeated attacks or strong attacks. There are several arenas or biomes to duke it out in, and the buildings strewn throughout are not only destructible but Titans can pick them up and throw them. There’s even a physics mechanic in play in that smaller objects that Titans can throw, like tanks or pieces of rubble, are thrown in a straight line, while big buildings are thrown in a curved arc.

As the battle rages on, players also have a Giga Meter that fills up. Once full, their monsters gain the ability to transform into a gigantic, more powerful ‘S’ version for a limited time. Collecting certain orbs will also add to that meter, and while in giant mode, they can unleash an explosive and flashy ultimate attack that fills the entire screen, just like the supers in any brawler game.

The combat also has more complex sides to it. For example, some Titans can deflect projectiles by executing certain moves (like block attacks) while some, like Wooley, can inhale and spit out not only projectiles but also enemy Titans, simply by using their special attack. This is both a good thing and a bad thing because it makes some of the Titans clearly more overpowered than the rest. Wooley’s special attack means that nobody can even go near it without being sucked and thrown; and there’s no way to counter that, to my knowledge. Another significantly OP Titan is Pipijuras, whose fast basic attacks have a long reach, and whose special attacks can shoot a powerful projectile across the entire arena. Pipijuras is one of the four Titans with a narrative in Story Mode, and it was the easiest because I could just mostly spam its special attack. 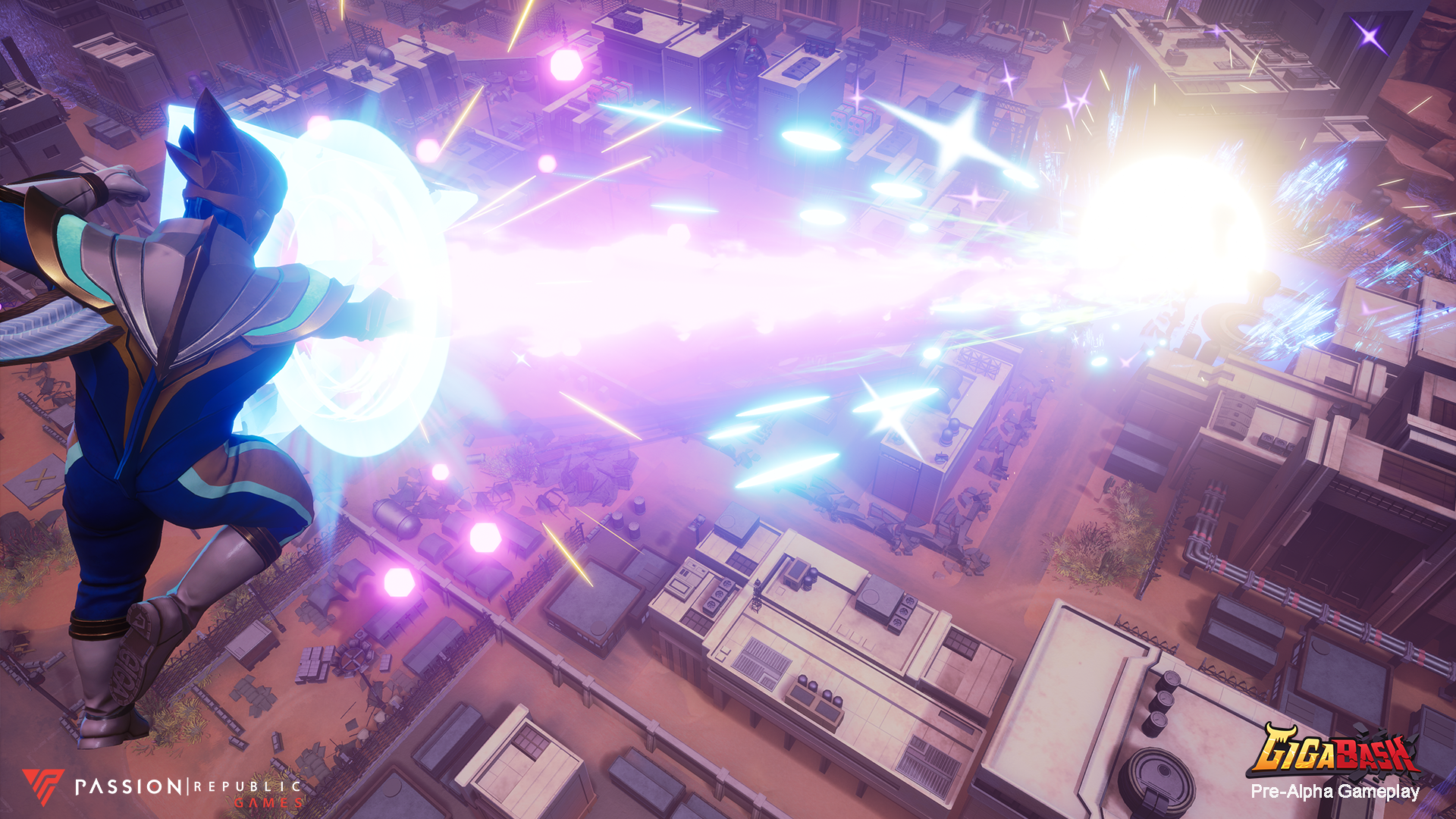 The difficult Story Mode and the overpowered Titans lead me to believe that this game might suffer from some balancing issues. However, balancing issues can easily be fixed with post-launch patches, so it’s not a massive problem at all. Trust me, some of these Titans and their attacks need some good nerfing. In addition, the Story Mode needs balancing, as some battles are way too easy while some can be punishing out of nowhere.

The Story Mode in GigaBash is also short in terms of length. It took me around two and a half hours to finish the Story Mode, and that includes the brief tutorial and me dying (and retrying) several times. If you blaze through it, it’s probably roughly two hours long, which isn’t much. However, there is a scoring system (performing better will lead to better ranks, like A, B, C or D) and the ability to gain XP (increasing levels will give you BGM music, artwork and new levels), so there is a bit of an incentive to replay Story Mode, perhaps even to test your mettle at higher difficulties. Each Titan also has a level system, increasing these should unlock new skins. Speaking of the XP system, that applies when playing in multiplayer too (both online and couch co-op), so playing with your friends and family will also yield new content unlocks. 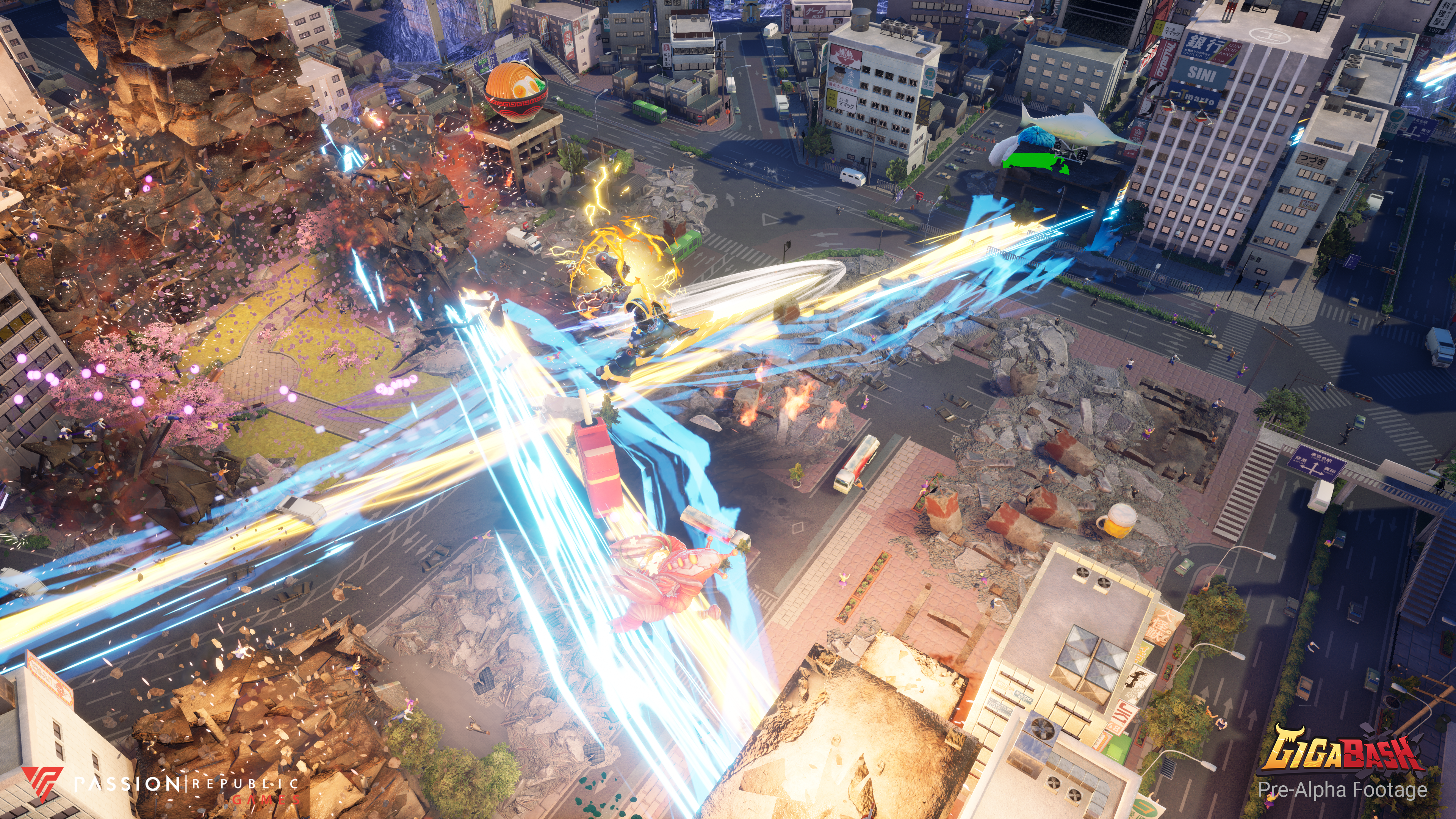 The meat of the game therein lies with the multiplayer. It’s fun, especially when you’re playing with friends and family. I managed to test out the online multiplayer and my experience was a pleasant one. It was smooth and there were no technical glitches like lag or anything. That bodes well for when the player pool becomes much bigger after the game officially launches.

Oh, and I loved being able to change the filter to a retro and grainy Showa filter, making the game look like classic Japanese kaiju films from the Showa era. The game doesn’t tell you that, but I discovered it by sifting through the options and now anybody who reads this review will know as well. Last but not least, this game comes with a Bahasa Melayu language option, so kudos to the dev team for that as well.

This game would make for a great party game for friends and family alike. It’s arguably the best time for a game like this to launch, as we’re currently seeing a boom in popularity for brawler party games like Super Smash Bros. Ultimate, Nickelodeon All-Star Brawl and the recently-released MultiVersus. That last one isn’t even available in Southeast Asia yet, so there’s less competition and a blank space for GigaBash to fill out.

Review copy provided by Passion Republic Games. Played on PC. GigaBash will launch on PS4, PS5, and PC on 5 August 2022.

News
Hilde Plants Her Flag As Next SoulCalibur 6 DLC Fighter

Bandai Namco has revealed that the next DLC fighter for SoulCalibur 6 will be Hilde. She was featured in both SoulCalibur 4 and SoulCalibur 5, so it's...

Jobs will be getting a shakeup in Final Fantasy XIV and its upcoming expansion Endwalker, according to its producers. Producer Naoki Yoshida stated...

Platform: PC Genre: Metroidvania action-adventure with a tinge of Dark Souls Just when you thought games couldn't get any more creative and weird ...