Developed by Panic Barn and published by No More Robots, Soccer Story aims to change how we see adventure RPGs by implementing a sports element to its storytelling and puzzle-solving. I would be lying to you if I said I wasn’t actually looking forward to reviewing this game. After seeing the trailer and some gameplay, I still wasn’t really interested. The general concept seemed a bit odd but it was once I began playing the beta, it was then that I found that the game is intentionally ironic in a pretty hilarious way.

The game takes place a year after The Calamity tore apart the very foundations of soccer—I’m only calling it this instead of football for the sake of the game. Since then, Soccer Inc. has taken full control of the sport and has banned anyone from even kicking a ball around. Luckily, a magical football has descended from the heavens and has chosen you, The Savior of Soccer, and have been tasked with saving the future of the sport and bringing harmony to the world once more. 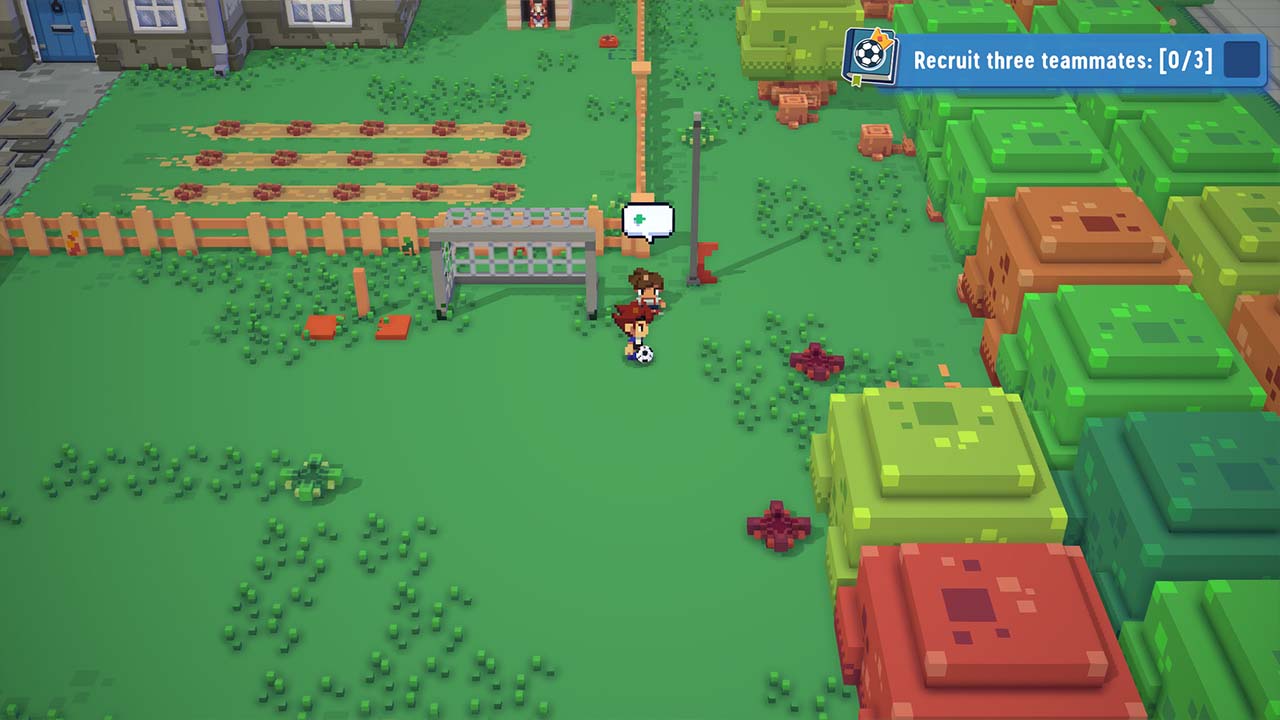 Straight off the bat, you can tell that the gameplay really does cater more towards controller players, just the precision and movement feel so much smoother when compared to mouse and keyboard. As I do with most RPGs, I found myself trying to complete every side quest possible, before I continued the main story. And that’s something I really like about the game, you really feel like you have the time and freedom to do whatever you want, in no particular order. I can’t help but compare it to Skyrim in that sense. There are challenges and quests spread across the map which when completed, will reward you with upgrade tokens which will just help you traverse the main story.

Now it does differ from your bog-standard RPGs. When you begin the game, you get to select one of two characters, a boy called Leo or a girl called Kai. You later find out that the one you don’t pick will be your twin sibling. Where it differs is in customizability, you can’t really customise your character or even change their name (at least in beta). I feel that this is a missed opportunity as I feel that customizability is what draws in most players. Even with your club, you can’t really customise the kits and colours which I did find a shame.

The overall aesthetic of the game is pretty damn cute. Although it has a mixture of 2D and 3D aspects, it all has been implemented so seamlessly that nothing really feels out of place and it overall just reminds me of the now old-school top-down view that Pokémon used to do. The colours are vibrant and overall just pleasing to the eye.

As for the soundtrack and sound effects, everything just fits. It’s by no means perfect or revolutionary. But I’d say that it does the job. 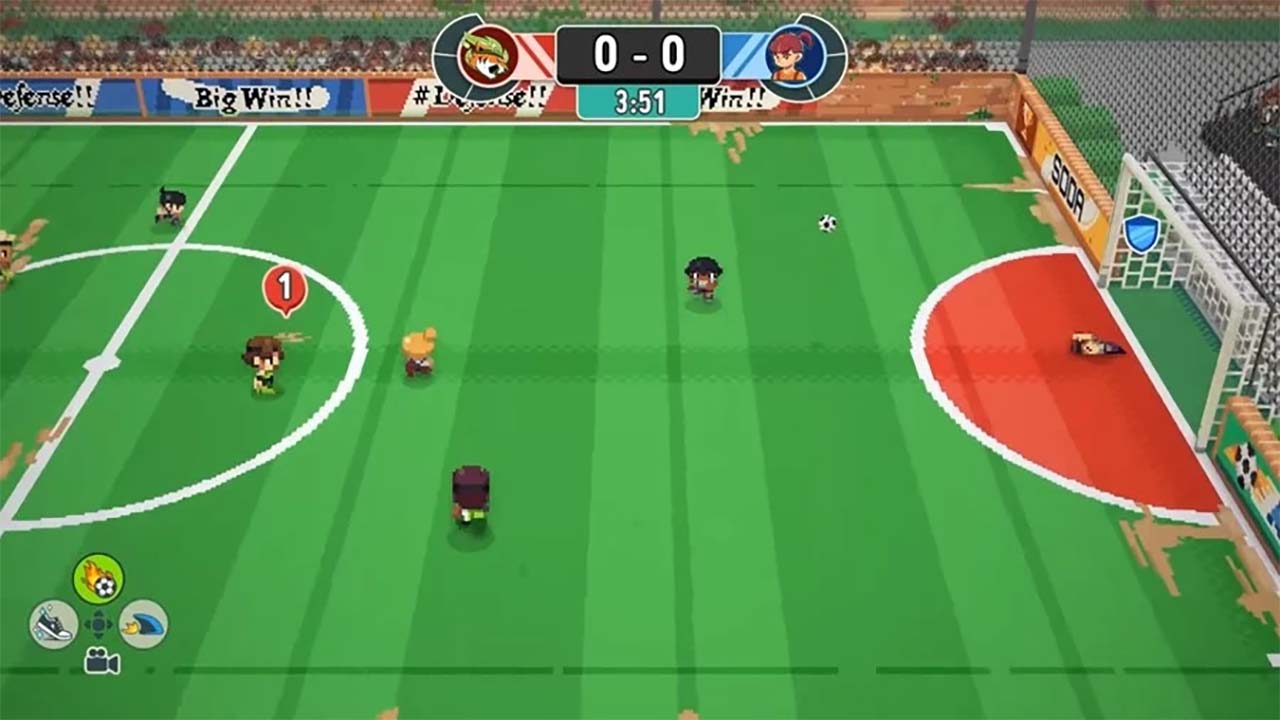 Although the game is very much an adventure, you do play some soccer. In the story you only get to play once against toddlers—no I’m not joking, literal toddlers… Who almost beat me…

Going into the match I was thinking that it would play a lot like FIFA as Electronic Arts set the standard for controls and general gameplay in soccer games. I couldn’t have been more wrong. Although the controls do feel somewhat familiar, it’s not all that intuitive. Not all the controls are displayed in the menu and it took me a couple of minutes just to figure out how to switch players when I didn’t have possession of the ball. As for the gameplay itself, I found that it was extremely fast-paced and chaotic, but not in a bad way. I felt that the face-paced nature and the chaos of the match were intentional by the devs to add a bit of difficulty to what looks like a cute and easy game, and if that is the case then they did a good job as I had four-year-olds lobbing balls over my keeper.

I did run into a couple of bugs here and there. One was that if I had summoned the ball to my feet and ran into a thin obstacle like a post or a sign, I would find that my character would just freeze for a solid five. I could open my menu, and the environment around me seemed fine, just my character would just stand frozen against the obstacle as the ball rolled away. After five seconds the ball would teleport back to the character’s feet and the character itself would be pushed back from the obstacle. This happened a few times, and although not game-breaking, it was frustrating as it brought me out of the immersion of the game.

Another problem I found was in the beta’s playable map, you headed towards the most Southeastern part of the map, all audio except for the music would cut out entirely, with static segments of the audio chiming in and out depending on how close you were to the border of the area.

The last bug that I found was just above the area where I found the audio issue. I found that sprinting with the ball in certain areas would reveal a Talking prompt which was just random as there was no one there. I initially thought it may have been a hidden interaction but as I attempted to interact with the Talking prompt, it never showed up again.

Obviously, the beta was pretty limited in terms of map size along with limiting the functions and available abilities. I feel that if the devs had implemented more of the other skill metrics and introduced the other puzzles that are inaccessible in the beta, I feel that it would probably convince me to want to buy it even more.

Like I said before, I was reluctant to play this game but by the end of the beta, the game had me so enthralled that I was genuinely sad that I had finished the beta. It puts a new spin on the boring RPG aspects that we’ve gotten so used to and is extremely reminiscent of the older top-down view Pokémon games we all played while growing up.

I feel that Soccer Story is one-of-a-kind and is definitely worth playing as it really isn’t what you expect it to be. And it makes perfect sense that this game is coming to Game Pass as it’s the perfect game to sit back, relax and just play for hours upon end.

Want to be the best elemental block-murdering assassin out there in the world of Teyvat? Well, this upcoming Genshin Impact event will sate your block...

We all probably know Gabe Newell best as the head honcho of Valve. But once upon a time, he was also a World of Warcraft gold farmer. Speaking to Edg...

Feature
Gamescom 2022: All The Announcements & News

Update (25/8/2022): Added games from Wednesday. Gamescom 2022 is live this week, and there are a ton of new video game announcements and surprises ...