One Piece Odyssey Is A Massive Worthwhile Filler Arc

One Piece is a beloved manga and anime series that has been entertaining fans worldwide for 25 years. It is the best-selling manga and the longest-running shonen anime of all time. One Piece Odyssey attempts to retell four major story arcs from the series in a Japanese-style RPG format, which is a challenging task. However, it does an outstanding job representing the classic anime series by providing an expressive and dedicated portrayal of the characters, allowing each one to shine.

One Piece Odyssey is a fantastic blend of One Piece and JRPG elements, which is an improvement over the decent One Piece Unlimited World Red. In my review of the PC version, I will examine the port, the game itself, and whether it is worth your time. Overall, One Piece Odyssey is one of the best anime games available and a strong JRPG in its own right.

As the player, you control the Straw Hat Pirates who are shipwrecked on the island of Waford. The crew includes several members of the Straw Hats such as Luffy, Nami, Zoro, Robin, Sanji, Chopper, Usopp, Brook and Franky, but Jinbei, the most recent addition to the crew, is not present. The crew’s ship, the Thousand Sunny, is heavily damaged and there is no way to leave the island, so the crew begins to explore the island which is filled with nature.

Soon after arriving on Waford, the Straw Hat Pirates lose their powers, and the only way to regain them is by reliving their past adventures. The game includes a variety of classic One Piece story arcs including Alabasta, Water Seven, Marineford, and Dressrosa, which are some of the most pivotal moments in the series. This means that fans of the series can enjoy reliving their favourite scenes.

When Does It Take Place? 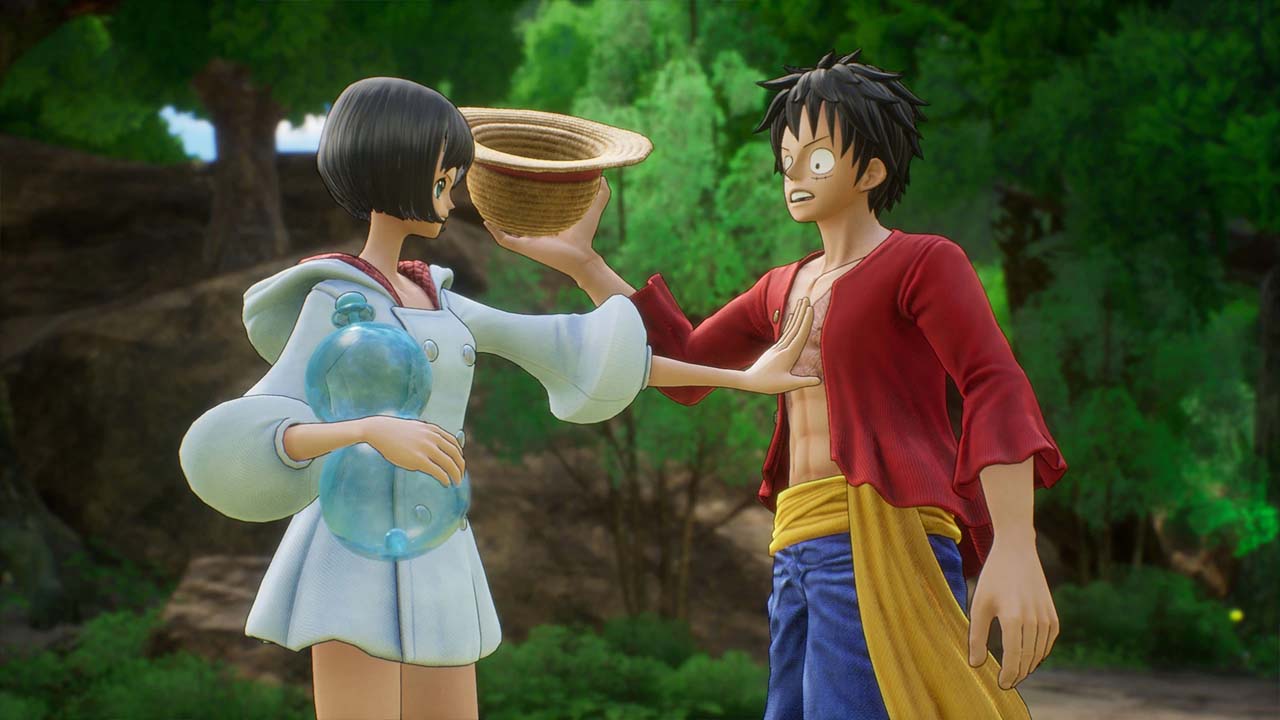 One Piece Odyssey is set around 750 episodes into the anime series and it assumes that the players are familiar with the characters, their abilities, and their backgrounds. The game mainly focuses on retelling the events of four major story arcs, which are interspersed with a new story written specifically for the game.

Although the manga author Eiichiro Oda had little involvement in the game’s story, he did contribute some concepts and creature designs, including some comically cute monsters. In the game, Luffy and his crew are stranded on Waford, an abandoned island inhabited by two new characters: the big-haired explorer Adio and the mysterious local girl Lim. Lim takes away the crew’s powers but soon realizes that they are the good kind of pirates. Although no one has amnesia, the Straw Hat crew has forgotten how to fight, so they set off on an adventure to recover memory cubes that contain their lost battle abilities and to relive four of their most important adventures to regain their fighting skills.

One Piece Odyssey is effectively a large filler arc, similar to the side adventures that the anime inserts to keep the TV show running weekly. While the new story and characters in Odyssey are decent for One Piece, the game shines in its retelling of past events. 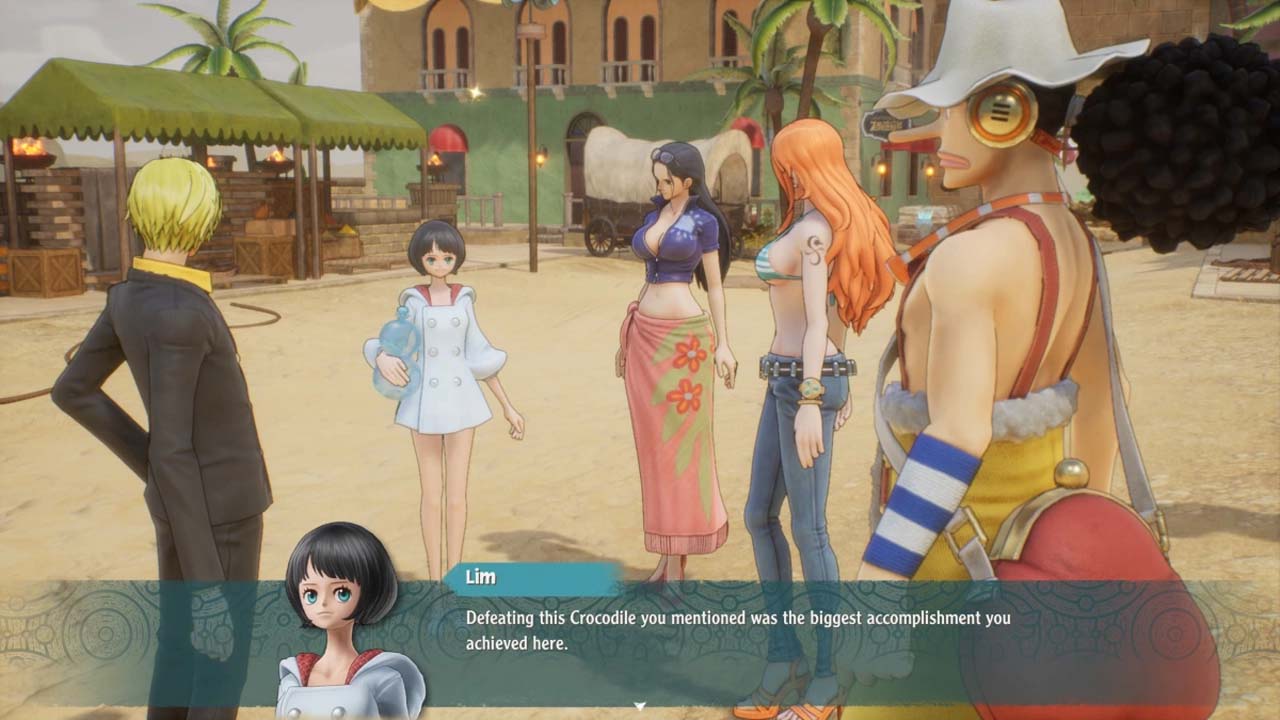 Even though these adventures in Memoria are based on past story arcs (Alabasta, Water Seven, Marineford, and Dressrosa), the Straw Hat Pirates know that this is just a rough approximation of their real adventures, and their actions won’t change what actually happened in the past. Despite this, they all resolve to do things better and make a happier ending, even if it’s just a dream. This creates an unexpectedly bittersweet and personal edge, with the heroes getting a chance to see lost and fallen friends one more time.

This results in a rich well of character development compared to the average One Piece filler anime, with each member of the crew getting time in the spotlight to reflect on their feelings and come to terms with their losses.

The manga frequently has characters crying over lost friends or sad farewells, while Odyssey focuses more on coming to terms with the past. Sadly, the character Brook only joins the party late in the game, but the rest of the crew are given room to develop. At least when they’re not getting sidetracked.

One Piece Odyssey is filled with excessive padding, even within the filler content. The main story often loses its focus, and side quests, grinding and scouring maps for treasure take precedence. For example, a chase across the desert to save a friend gets delayed by various obstacles such as bandits stealing the crew’s food, a monkey stealing Nami’s wallet, a river of quicksand, a failed spelunking adventure to bypass the quicksand, and then a big cartoon crab turns up to take everyone to their destination anyway.

Despite this, it was hard for me to stay annoyed at Odyssey. The distractions often lean into One Piece’s silly side, and even these strange story digressions lead to some spectacular boss fights and fun new monsters. There are also great encounters in the optional side content, such as chasing the bounties on rival pirates who have their own comical gimmicks, like a crew that likes to leap dramatically off cliff-tops, but haven’t figured out the “landing safely” part yet. However, almost every part of Odyssey could use some trimming. Quests could be shortened, the grind reduced, and backtracking excised to leave a leaner and faster game.

The main activity in One Piece Odyssey is participating in turn-based JRPG battles. Despite the filler content, the battles are more clever than I had anticipated. The developers put a lot of effort into replicating the sprawling and chaotic cartoon brawls of the source 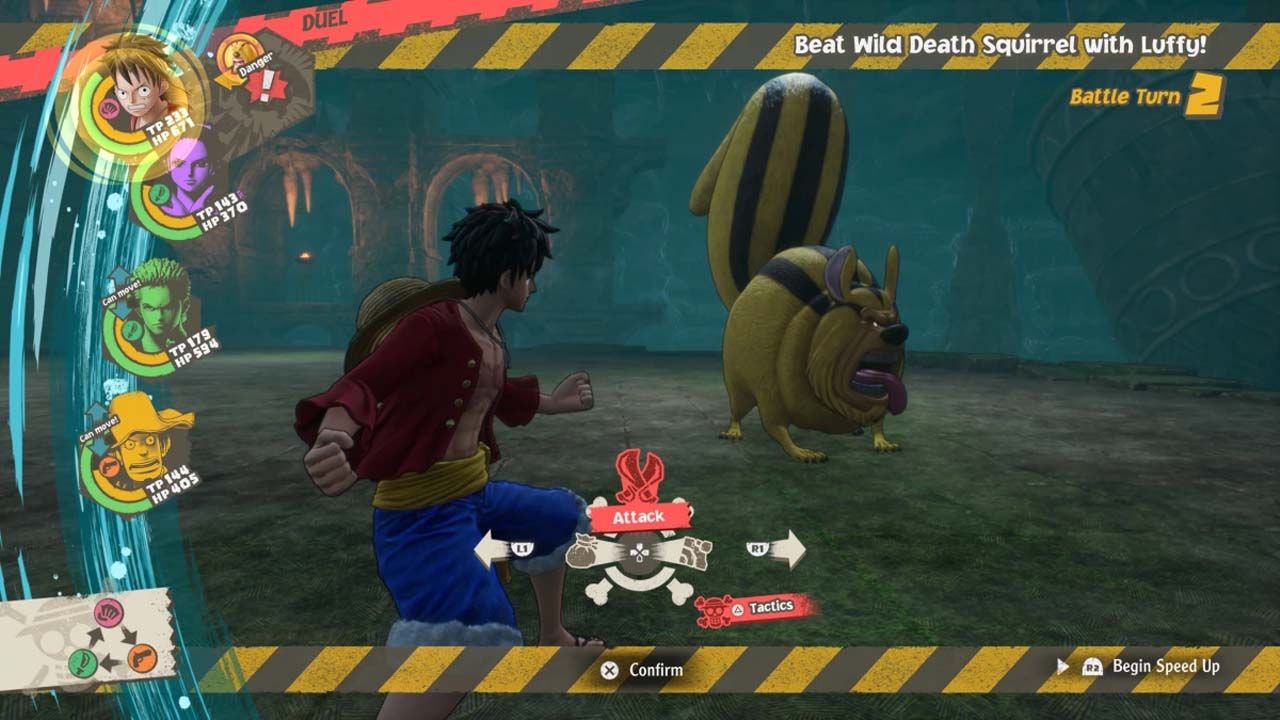 In One Piece Odyssey, the battles are similar to other RPG games, where players control four characters to fight against a group of enemies. However, the scale of the battles is unique, as each party member can engage with a separate group of up to four enemies in their own part of the battlefield. Some attacks are limited to targeting nearby foes, while others can hit distant enemies or knock one enemy into its nearby companions. The attacks that launch enemies towards a distant crewmate can lead to entertaining banter during the battle. The characters have different preferences, some appreciate fresh targets, while others would prefer fewer opponents.

The game includes surprise bonus objectives called Dramatic Scenes, which can be triggered during battle. These objectives require players to finish an enemy with a specific character or rescue a crewmate before they get hit by a big charge-up attack. Completing these objectives can give a large XP boost, and sometimes the system is used to add more character to the battles. For example, if Sanji and Zoro are standing together, their rivalry might result in banter and their Technique Points (this game’s MP equivalent) being fully recharged.

Despite these features, One Piece Odyssey lacks difficulty settings or scaling, making the first 5-10 hours of the game extremely easy. Even without paying attention to stats and largely ignoring synergies between characters, it wasn’t until 15 hours into the game that players may encounter the first character knocked out, and a quick healing item saw them revived seconds later. The difficulty does even out a bit after that point, but players may have to wait a long time for any kind of challenge.

Despite the easy difficulty level, the battles in One Piece Odyssey are still enjoyable to watch. The game beautifully replicates the visual tone of the anime and captures the manga’s style by rendering shadows as increasingly dense shading lines, mimicking the art of Eiichiro Oda. This detail is deeply charming and helps the exaggerated cartoon monster designs to work in 3D and fit in naturally with the more subdued geography.

While the game is largely linear, the dungeons and towns in One Piece Odyssey are fun to explore. In the overworld, each character has their own unique abilities that allow them to interact with the environment. For example, Luffy can cross gaps with his stretchy rubber arms, Zoro can slice through metal bars, Franky can build bridges over specific gaps, and Sanji can smell fresh ingredients from a distance. It is also worth taking the time to talk to the NPCs, as they have many little gags to offer, such as guards who forgot their weapons at home, bandits questioning their career choices, shopkeepers haggled into the ground by Nami, and sassy talking animals translated by Chopper. 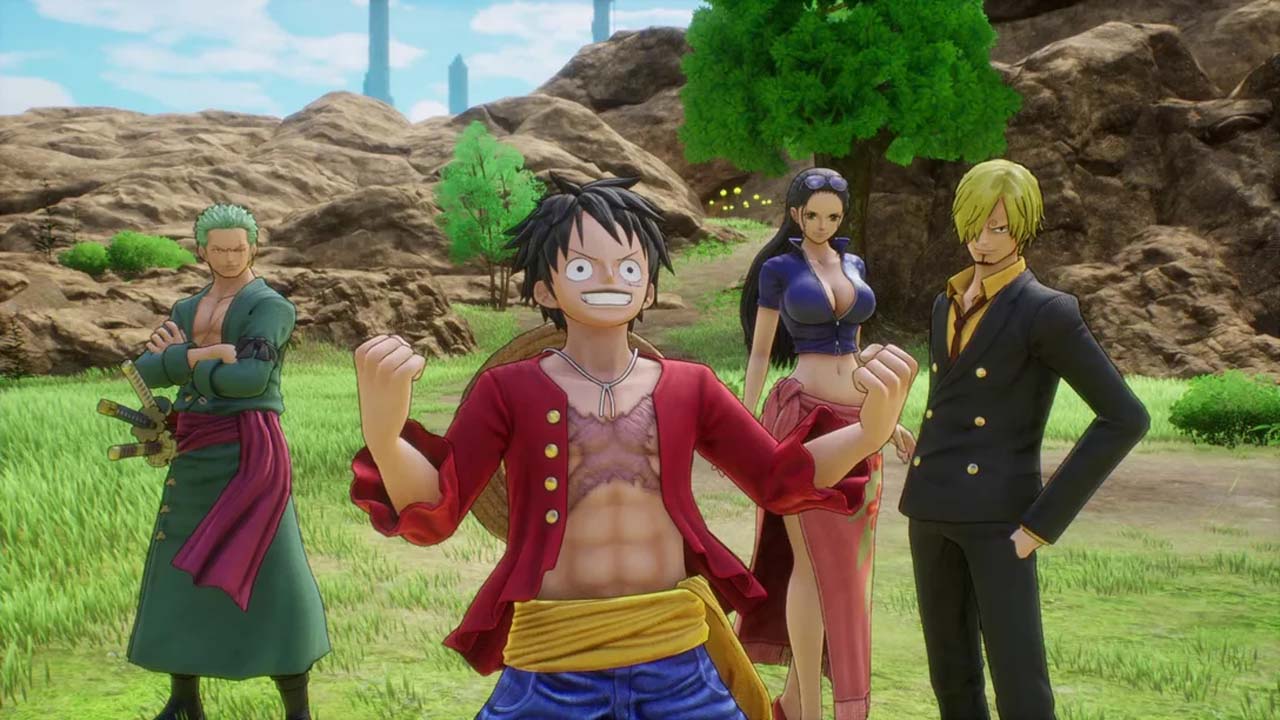 In One Piece Odyssey, the battles are familiar but unique in scale, with each party member engaging with a separate enemy group in their own part of the battlefield. There are also surprise bonus objectives called Dramatic Scenes, and the game captures the visual tone of the anime, replicating the series’ art style through the use of shading lines. The NPCs are charming, but their animation can be stiff, while the combat animations are a treat, with fast, clear and nostalgic animations that can be doubled for faster combat.

The game does not have ultrawide monitor support, but has a decent range of graphics and control settings and plays well on both the controller and mouse/keyboard. It supports high refresh rates, but some cutscenes only run at 30 fps and only have Japanese audio with subtitles. Overall, while the game is a little flabby and could use some trimming, it is a fine new adventure that captures the bittersweet tone of the series and offers a leisurely experience for fans.

For fans of the One Piece manga and anime, One Piece Odyssey may be worth investing in. However, it may not be the best game for those who are not familiar with the source material or are looking for a more challenging turn-based RPG. The game is relatively easy and assumes that players have a certain level of knowledge about One Piece. Despite this, it offers a nostalgic and visually pleasing experience for those who are fans of the series and are looking for an easygoing adventure.

News
[Report] The Next Tales Game Is Tales of Arise

And the leaks keep on coming, courtesy of Bandai Namco's recent security flaw (via ResetEra). First, it was that George R.R. Martin/From Software coll...