God of War is an awesome action game with a breathtaking story and really fun combat mechanics. It’s also bats*** tough, especially if this is your first God of War game. Even veterans like myself had a tough time getting the hang of the more intimate and duel-esqueÂ nature of the game’s new combat system.

Fortunately, we’ve played a lot of it so we can give you these tips, tricks, and even a skill tree tip or four to help you out with the major meat of this game.

But First, Some Basic Tips & Tricks 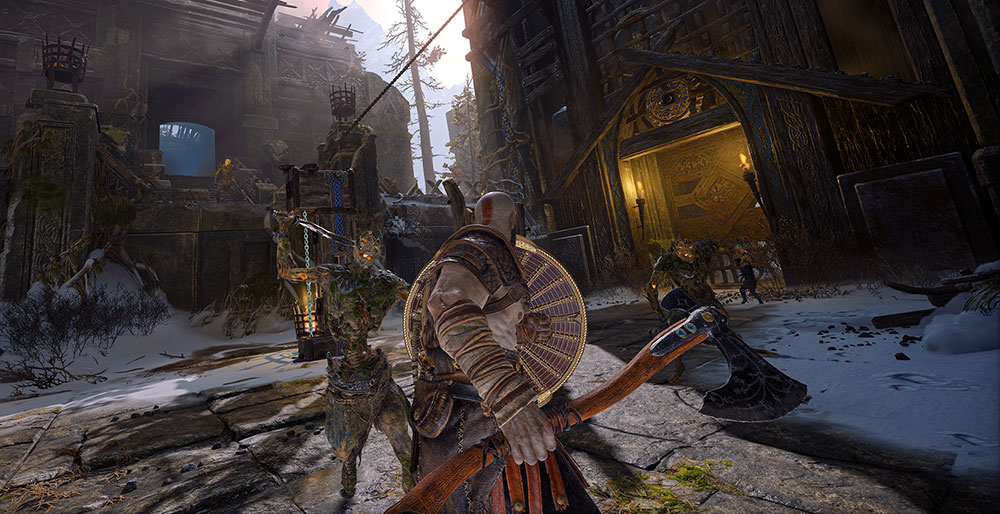 The best offence is a good defence. This timeless rule applies here. If you parry at the right time, you get to recover first and counterattack. So practice the timing and get the frames down pat in the first few hours. After a few hours when the game throws even more enemies at you, the parry animation works to your advantage because its range affects enemies in front of you. So master it well:

The down d-pad button is your best friend.

In God of War, you will get a lot of indicators popping up to warn you if an enemy is going to attack you from the back. This is where you press down on the d-pad and then guard the attack.

When all else fails, press X to dodge.

Roll out if you see an unblockable attack coming your way; that’s usually an attack where a red circle flashes. Everything else can be blocked, parried, and reflected.

As fast as Kratos’ attacks are, they do have recovery time, especially with some moves involving the Leviathan Axe. This is where enemies will take a cheap shot at you. If you’re fighting Draugr grunts without shields? Spam your Lights and Heavies away!

Never back yourself into the corner.

There is nothing as frustrating as being mobbed by 3 unflinching draugrs and reavers and not being able to dodge out of the way. Be sure to actively roll away from corners when possible. It can be hard if you’re in the frenzy of a fight, but it makes you survive longer.

Push enemies off the cliffside/river/lava pool when possible.

You’ll still get XP and items if you use the “cheap” method of ringing out your opponents. This can also work on the Dark Elves, but only if they’re on their feet. The best weapons to push enemies is the Shield/Melee combo; Kratos has a Spartan kick that pushes enemies back a considerable distance. This tactic is especially useful when you’re doing Muspelheim trials.

Don’t start your first playthrough on God of War mode.

Trust me; you’ll regret it. We know you want to prove your hardcoreness, but there are so many changes and curveballs in this mode, you will “get rekted”, big time. Enemy patterns are tougher to suss out, and they can power up if you so much as damage them for a bit. Also, unlike games like Bayonetta, starting over on the hardest setting does not carry your loot, items, and upgrades over.

Just suck it up, play the entire game on either Normal or Hard, and THEN try out God of War mode.

The Best Skills To Start Off With

When you kill things or complete quests/sidequests, you get experience points. You need these to buff up Kratos and Atreus. Here’s a quick rundown on what you should get first per weapon. 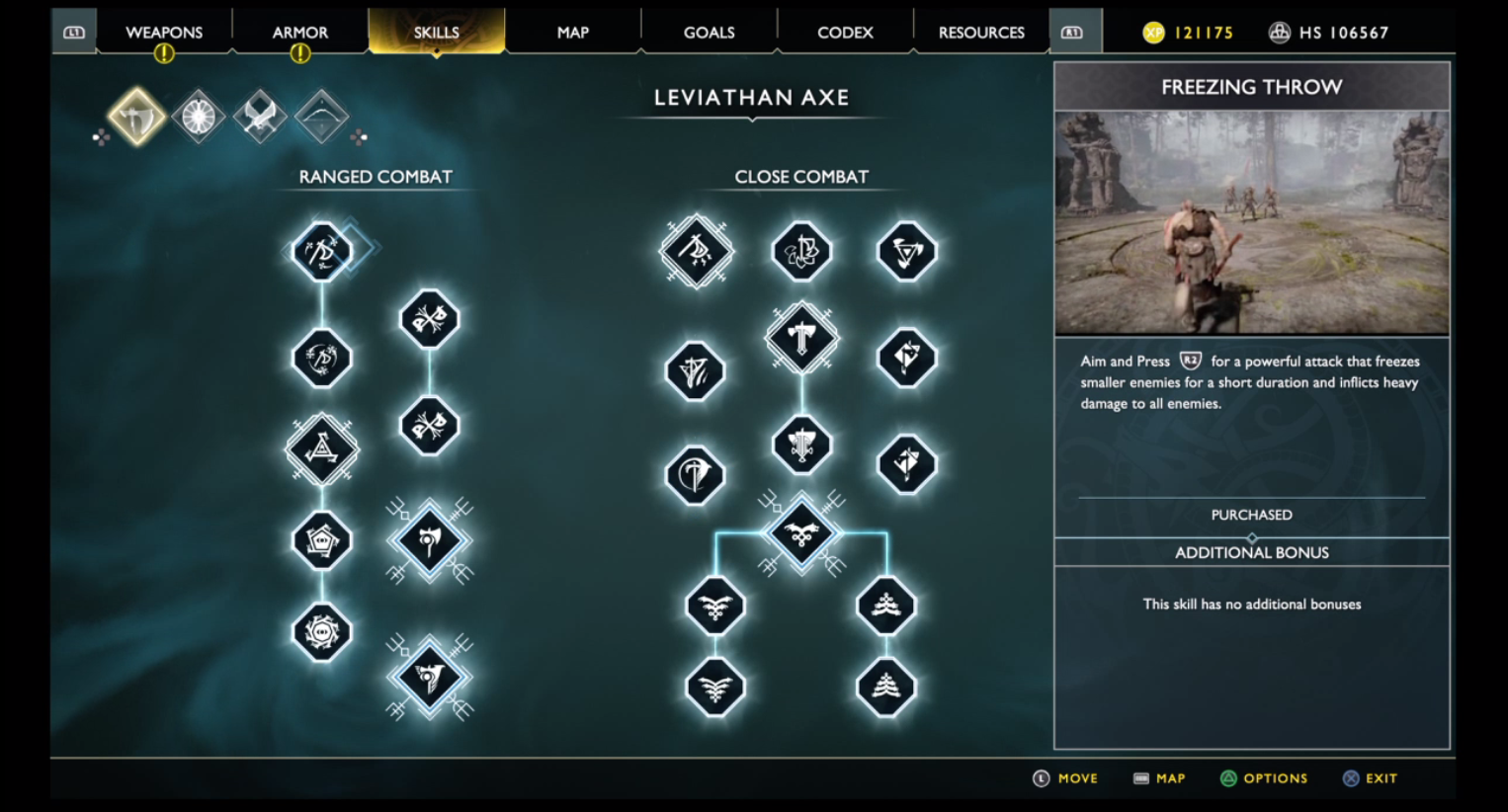 Executioner’s Cleave (Melee): Kratos charges up for a devastating one-target heavy attack. There are a number of enchantments that give you bonuses if you land an Executioner’s Cleave, so do get those, practice the timing of this move, and whack away. This is best used if Atreus has the grapple ability mid-game.

Grinding Storm (Melee): Hold R1 to do a spinneroonie multi-hitting axe attack after your first light attack. Very useful since it travels at a short distance and can hit foes around you.

Precision Throw Combo (Ranged): After landing a precision axe throw (weak points and headshots), press Triangle during the flash to recall the axe and cause the next throw or melee attack to explode on contact, inflicting Frost damage. 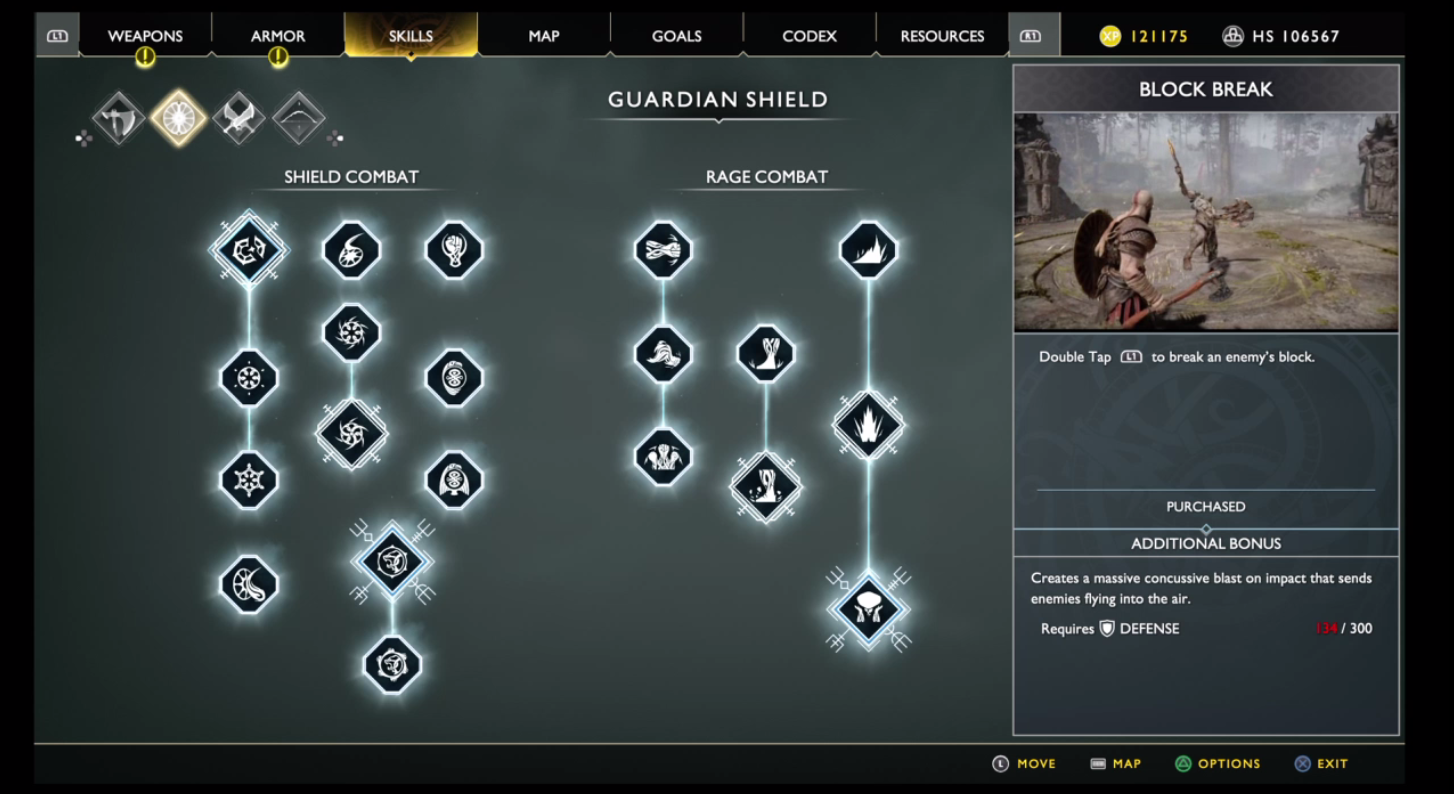 Block Break: Double Tap L1 to break an enemy’s block. Perfect against the Viken, the heavier Draugr, and those goddamn Dark Elves who can turtle you like mad.

Guardian Sweep: You hold R1 to do this attack after your first Light attack. You’ll do a sweep attack that knocks enemies off balance and deal a moderate amount of stun damage. When you’re bare-handed, you always want to get an enemy’s stun meter to escalate, so this is one early move that will help you in the long run.

Countering Strike: Press R1 after a last-second block (parry) to counter the attack with aÂ  powerful shield strike. Good to keep lighter and medium enemies off your back.

Spartan Rage: Honestly, you don’t need to upgrade this one too much. The default homing superman punch move and multi-hitting fist attack is good enough. 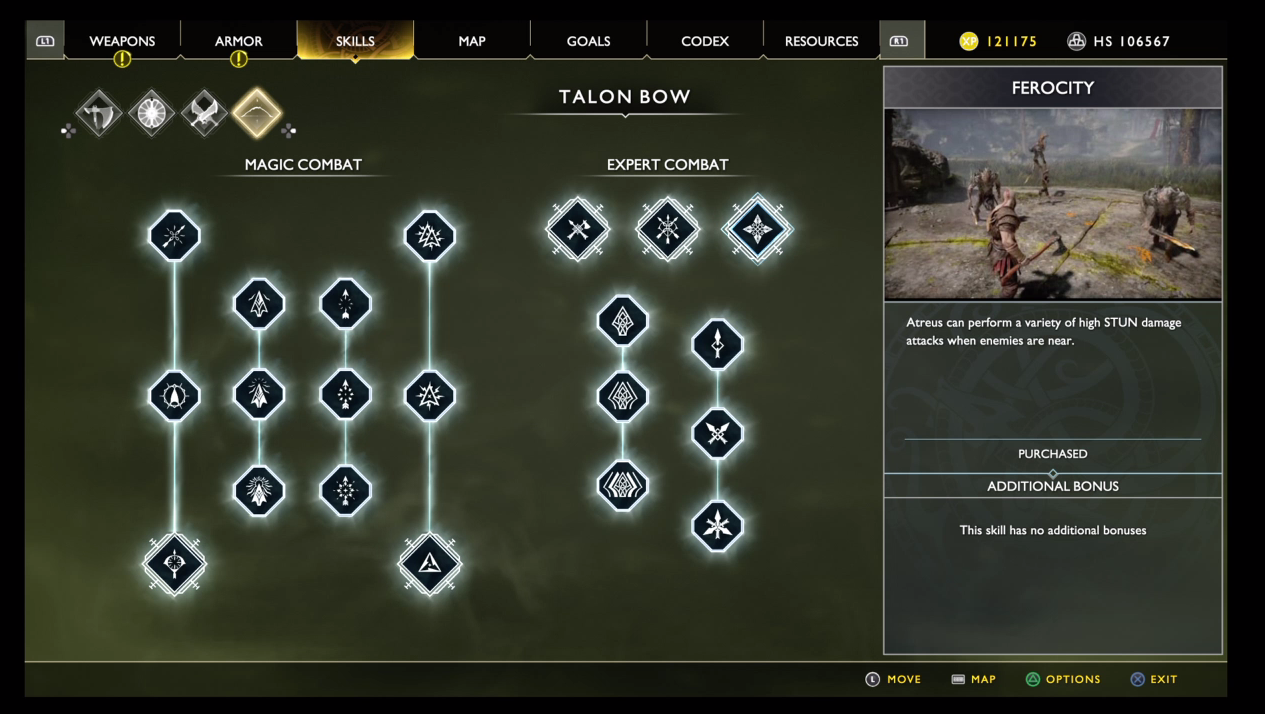 Your son is pretty damn useful after he gets his bow and after you unlock the first few skills in his skill tree. Maxing him out means that he gets 4 special shots that recharge quick.

Shock Conduit: His shock arrows can be chained between multiple enemies. Go for this skill ASAP when you get access to it.

Teamwork: Atreus will help Kratos if he’s attacked, or an enemy if they’re in vulnerable states.

Acrobatics: While Atreus is choking an enemy, he can perform a combo if Kratos launches or hits an enemy from far away.

Say hello to Kratos’ old pair of friends! The blades are back, and they’re useful as ever in the mid-range attack department. Kratos can also pull off a Scorpion where he launches one of his blades to harpoon an enemy, then pull them closer to him. His follow-up attack from there can juggle enemies (see below).

Whirling Chaos – You hold R1 to perform this attack. This basically lets you hit multiple enemies multiple times in a short burst. Very handy for extra damage and it’s fast too.

Elemental Surge – press and hold the R1 when in aiming mode. When he hits an enemy, Kratos will detonate a ball of energy and launch all enemies within the blast radius of the blade. Good for launching enemies from far away.

The Best Talismans Early In The Game(via Polygon Guides)

This talisman lets you recover faster after being hit by an attack. It also increases your defence when youâ€™re guarding with your shield. Best of all, it increases your parry window, which means you don’t need super precise timing for your parries and reflects.

This talisman makes you slow time down when you dodge, like Witch Time in Bayonetta.

Head to the Muspelheim Tower and stand in the circle at the top of the tower.

You get the axe pommel for your troubles. It boosts up all your stats while adding an extra shockwave at the end of your light attack combos. 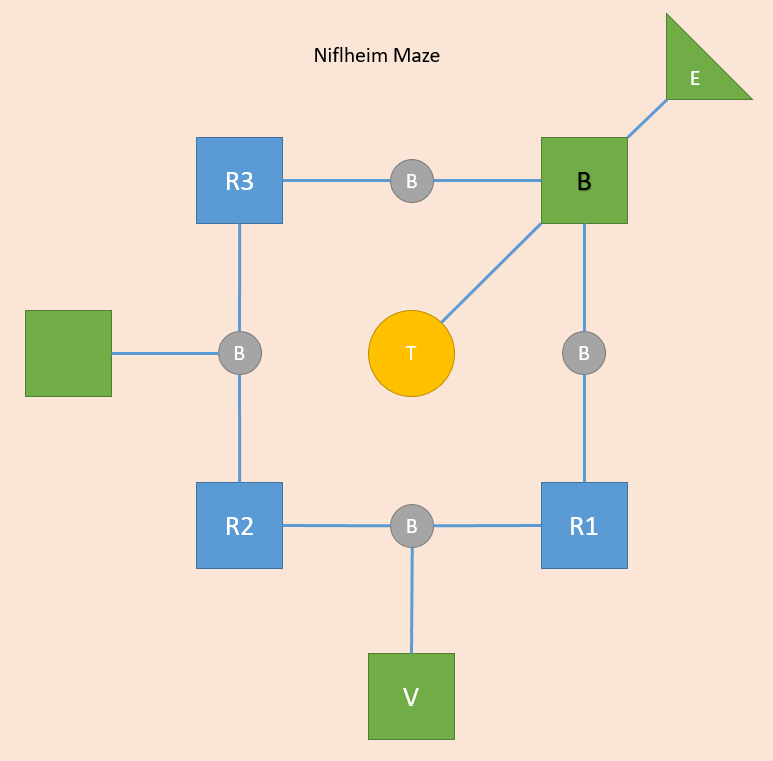 Mihoyo has made its new week-long limited PvP event live for Genshin Impact. It's called the Windtrace event and it's essentially hide-and-seek/cops-a...

Leave a Reply to Eat Chicken Wings – Win a PS4 Console Or Even Fly to E3! – KAKUCHOPUREI.COM Cancel reply