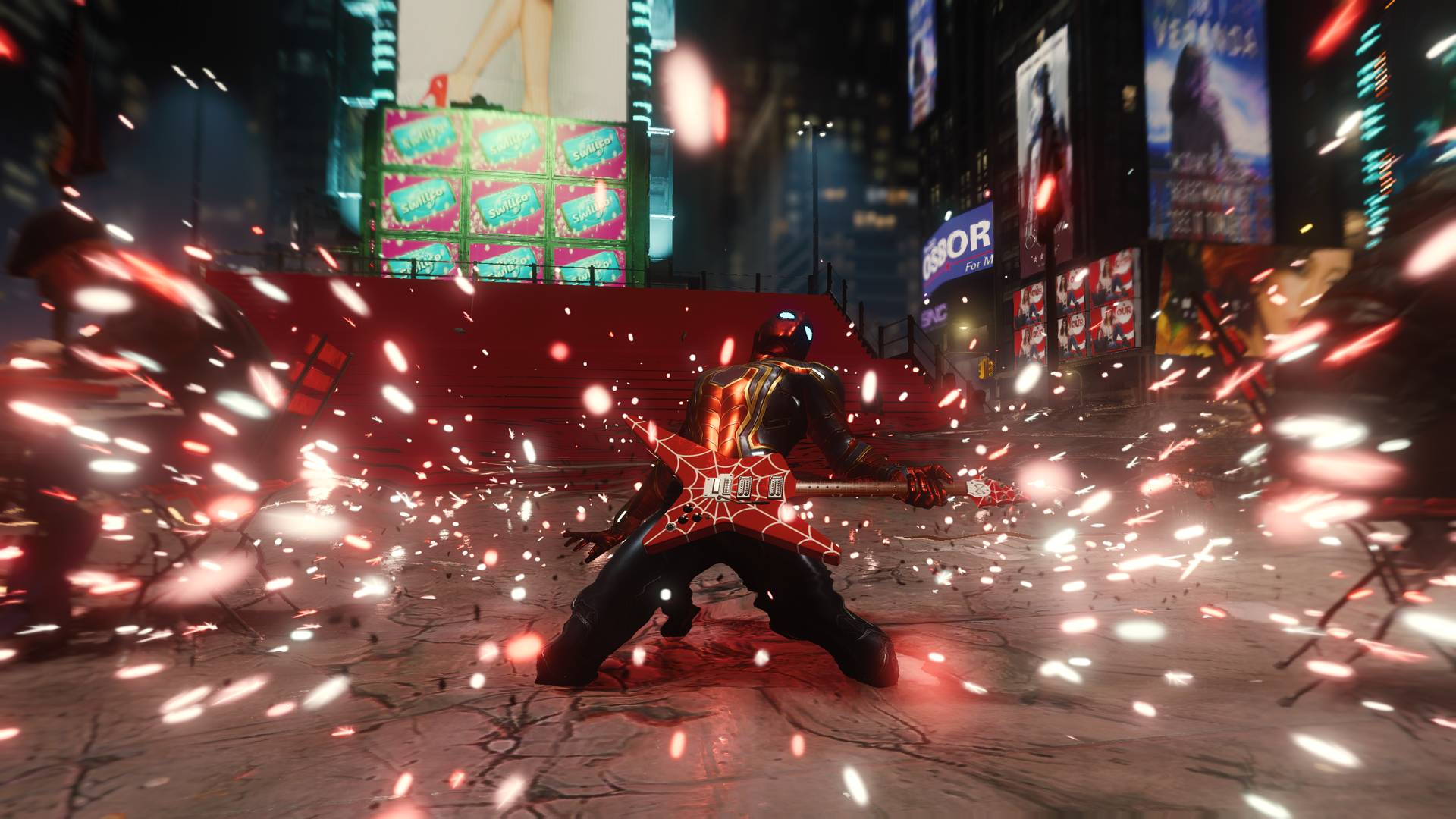 Marvel’s Spider-Man is a success even before it launched thanks to fanboy and game journalism hype dating back to the last few E3s. But you know what? The final product earns its merit badge.

I bought my copy, finished it, and thought it was a great first step in making Spider-Man games again. God bless Marvel for giving this IP to Sony and Insomniac, away from the milking-happy hands of Activision and the way they exhaust Beenox by making them rush out half-assed Spider-Man games.

I even agree with most of the points Kenn brought up in his Amazing review of Insomniac’s latest. Obviously, some things needed work (which I’ll bring up later), but it’s a decent jaunt. I have played various crappy super-hero games back in the day (like the Megadrive and Sega Saturn/PlayStation 2D platforming junk) and thankfully Marvel’s Spider-Man isn’t one of them.

There will probably be a sequel in the works, but for now here’s the official word from the game’s creative director (and former games journalist) Bryan Intihar:

Nothing to announce [regarding a sequel] but we obviously want to keep you engaged in our Spider-Man universe. Thatâ€™s why we said right off the bat youâ€™re going to have three drops of DLC. Itâ€™s not just activities in the city, this is a full story. Youâ€™re going to be able to get a pretty chunky, new experience.

So why not we just throw our predictions and suggestions in the hat? Even if these ideas might end up as DLC expansions (which is fine in itself), it’s still a win for casual, hardcore, and comic book fan gamers alike.

Oh and there will be some spoilers here, so I’ll leave this on here.

Without further ado, here’s what I want:

Have The Main Baddies Roam Around New York

To make the game’s New York City a bit more of a living city, why not crank up the challenge a few notches and have guys like The Shocker, Rhino, and some of the Sinister Six foes crop up at random to fight Spider-Man at random? It’s not like The Raft can hold these goons for too long anyway.

I personally enjoyed the Taskmaster challenges and fights because after completing some of the Bomb and Stealth Challenges, I was ambushed by the supervillain himself. He basically mirrors you when you fight him, so at this point, you need to already know how to pull off Perfect Dodges and counterattacks. It’s the light version of the Bayonetta vs. Jeanne/Lumen Sage fight.

It’s been established through one of the Backpack Tokens that Eddie Brock is part of this Insomniac Spider-Man universe. And at the end of the game, the symbiote is one of Osbourne’s next project post-game. Sooner or later in either the game’s future DLC or a sequel down the line, we’ll be seeing the symbiote taking over Peter Parker, and then Peter himself fighting against it, which then leads to Eddie Brock getting the symbiote suit somehow.

Gameplay-wise, this can be a mirror-match of sorts like that Bayonetta scenario I mentioned. Your Spider senses do not work against the symbiote, so you’ll need to really learn when to dodge and when to counterattack without any prompt and aid. Oh and to spice things up and make it tougher, the symbiote can somehow nullify your Focus Healing so you really need to dodge right and pay attention.

Bring In The Rest Of The Spider-Man Villains

While we’re at it, how about we bring in more enemies into the fray? There’s a lot Insomniac can pick and create stories & missions around, like oh say Hammerhead (below), Mysterio, Kraven the Hunter, Sandman, Hydro-Man, the Hobgoblin, the Lizard, Chameleon, the Enforcers, and a ton more.

Marvel’s Spider-Man gave us a lovely digital version of New York City. The expansions and sequels can open up the state further. There’s Brooklyn, Queens, Bronx, and Staten Island.

Each of these districts are big enough to house a couple more activities and missions for the webheaded wizard to faff about in. With a bigger playground, that also equals more criminal factions to fight against.

Bring In The Avengers, X-Men, and Fantastic Four

With Disney already acquiring the rights to Fan4stic/Fantastic Four and X-Men, Marvel’s first family can now collaborate with Spider-Man for future stories in the game. Imagine the possibilities similar to Spider-Man Web of Shadows or even the 90s 16-bit Spider-Man games: Wolverine and Spider-Man together again. Johnny Storm and The Thing help out Spider-Man defeat The Mole Man and/or Doctor Doom.

Or have Captain America and Spider-Man going to Latveria to fight a slew of D-lister villains, Doctor Doom again, and Doom bots just like in that old PC game in the 80s. Except good.

If the stars align in Insomniac’s favour, we may need to be holding onto our copy of Marvel’s Spider-Man a lot longer than usual. And we may finally see this suit in the next Spider-Man game….

Marvel’s Spider-Man will have a new game plus mode down the line, so why not they implement an option for us to replay the epic story missions? The Amazing Spider-Man games last generation pulled that off just fine; why didn’t Insomniac Games do this early on?

My only big gripe from giving this game a high mark -I’d probably give it a 70 out of 100 in retrospect- is that the bits with Mary-Jane Watson as a reporter and Miles Morales sneaking through places really breaks the flow of the game.

I understand that it can work from a story standpoint and can flesh out how important the two are in the grand scheme of things. And they do not wear out their welcome. But whether I’m in the museum as MJ talking to the curator in cahoots with The Kingpin, or if I’m sneaking through a Sable group checkpoint and hacking TV monitors to distract guards, I’m thinking to myself “when the f*** am I going to start beating up these guys?”

Imagine the werewolf bits in Sonic Unleashed; they really put a damper in the running-platforming-action segments that are the main focus of the game, and somehow do not complement the overarching design.Â In this context, Insomniac made us play the side characters in sections that are the complete opposite of the main game’s open-world action momentum and pacing.

It’s rather telling of a game when you have game journalists bragging online about getting Platinum trophies for an open world game less than a week in before a game’s launch. I’m not knocking my fellow peers about their skill or even comment on Insomniac’s overall game’s difficulty curve.

Compare this game with the Batman Arkham trilogy: most of us might feel a much larger sense of accomplishment with the latter than the former because a number of game mechanics in the trilogy are quite strict with its nuances.

Long story short, Marvel’s Spider-Man is not a complete masterpiece. It’s still great fun though. Among the marquee PlayStation titles, it sits at number 2, with God of War being number 1 and Detroit: Become Human sitting at number 3.

Marvel’s Spider-Man is a spectacular first step in making Spider-Man games great again. And with all of these ideas I mentioned above and with Insomniac Games’ ability to thrive with its sequels (see Ratchet & Clank), I’m pretty confident that their next web-laced wonder will make fans rightfully scream “Excelsior!” with pride.

[…] Back to the positives: this was the open world template that led to the team to create Marvel’s Spider-Man. […]