This review is courtesy of the awesome gaming website Frags of War. Check out their strategy game reviews & features atÂ fragsofwar.com

For those that remember the classic Space Hulk game from 1993, it has always been an unfulfilled wish to get a new modern Space Hulk PC game. Weâ€™ve had some recently that have been pretty sub-par. Space Hulk: Tactics is Cyanide Studioâ€™s attempt at recreating the classic Warhammer 40,000 board game for the PC.

Space Hulk: Tactics has more similarities with Games Workshopâ€™s Warhammer 40,000 board game than the 1993 PC classic by EA (yesâ€¦ Electronic Arts made some amazing games back in the day).

I want to say it is a faithful remake of the board game rules, but I canâ€™t because it adds some new mechanics into the game to refresh the tactical gameplay.

But it still feels very much like the board game, down to being insanely difficult and luck-driven at times with random dice rolls.

Space Hulk: Tactics has two campaigns. One following the exploits of the Blood Angels chapter of the Space marines and the other, a Genestealers campaign that takes place hundreds of years before the Space Marine campaign. 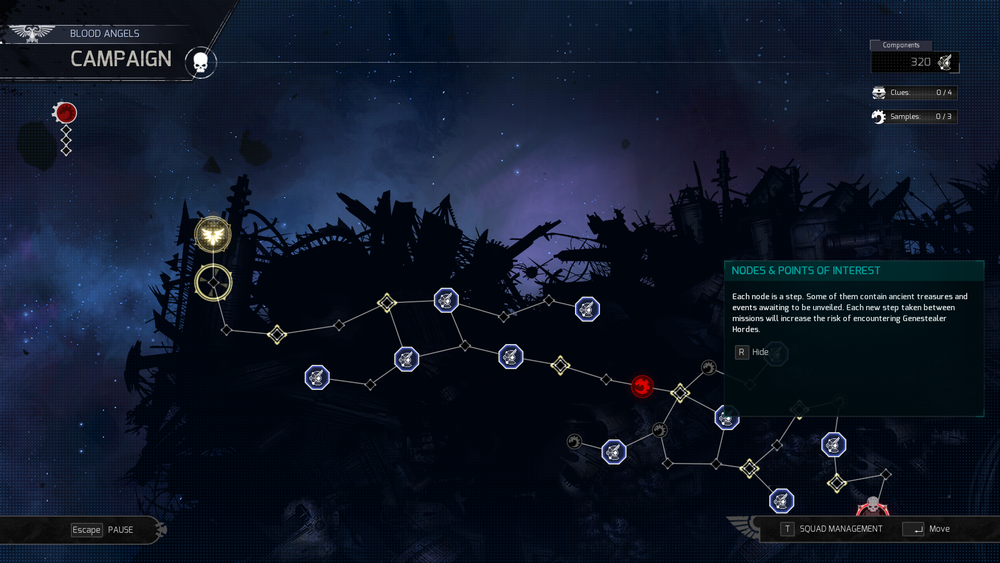 The campaign map is made up of nodes. Itâ€™s basically a maze of branching paths, resources to collect, story beats and missions. There is always one main story mission in a chapter.

Itâ€™s not the most engaging campaign map, but it serves its purpose as a narrative device for the tactical turn-based battles.

Space Hulk: Tactics uses an action point system. Every action, movement and even turning your unit, uses AP. Each Terminator gets 4 APs while Genestealers (with the exception of special Genestealers) get 6 APs.

This means that the Space marines feel like lumbering and slow dudes that take forever to get to where you want them to go. It also leads to moments of agony as you just do not have enough APs to execute the plan the way you want it.

This is exacerbated by turn-limited missions. A majority of missions require you to fulfill some objective within a set amount of turns. Now, this is annoying and I hate this in most other games. But it is a necessity in Space Hulk: Tactics. 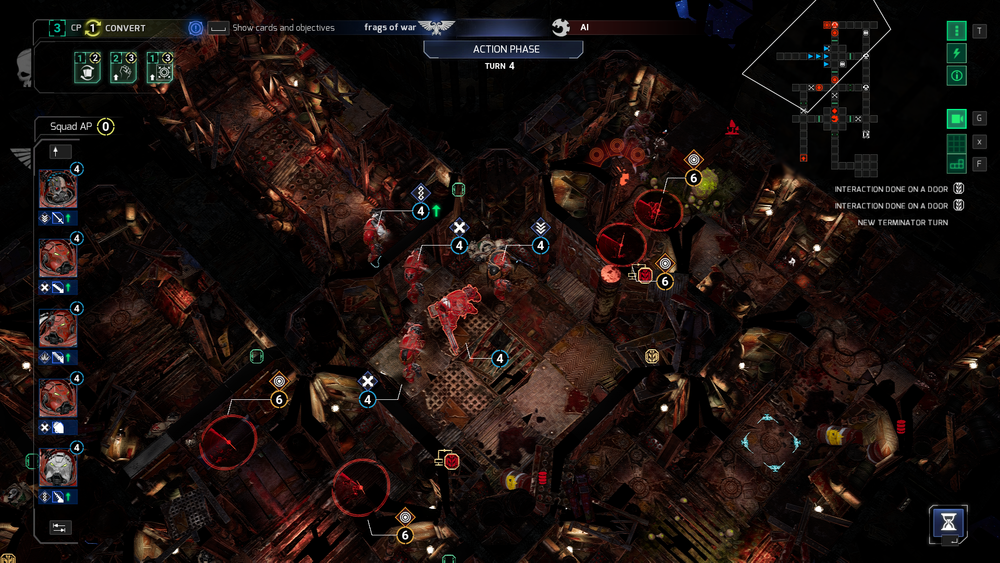 Without turn-limited missions, the Space Marines could hold out using the overwatch ability (auto fires at anything that moves within their range of fire) and keep the Genestealers at bay. Turn limits keep you on the edge of completely losing the mission by a thread as you rush towards your objective.

Battles are also based on dice rolls. For each attack, dice is rolled to calculate the success or failure of it. There is no calculation for damage as a successful attack means instant death. Space Hulk: Tactics trains you to be cautious in your tactical approach due to these factors.

Keeping your Space Marines safe while progressing towards the objective will be the modus operandi here. In Space Hulk: Tactics your Space marines are never really â€˜safeâ€™

Using the Space Marines, youâ€™ll need to make use of your entire squad, covering every angle as you progress forward. Long narrow corridors are you friend as these can be turned into Genestealer death traps when you use overwatch.

Things are a lot different for the Genestealers. Genestealers are primarily a melee-focused faction. Which means youâ€™ll have to get up close and personal to kill the Space Marines. Moving through narrow corridors and rooms fully covered by Space Marines is a no no.

Itâ€™s a guaranteed way of wasting your opportunities and decimating your Genestealers. Itâ€™s suicide basically. Instead, the Genestealers must use misdirection and cunning to trick the Space Marines.

Genestealers can move longer distances and can spawn more units. Using misdirection, superior mobility and numbers, you can eventually wear down the Space Marines with constant attack and feints. 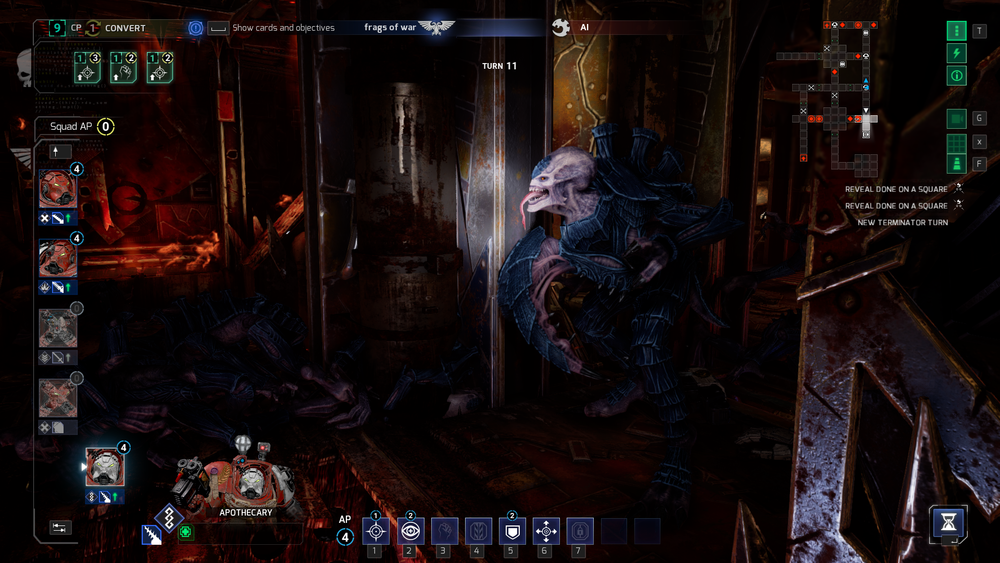 It has to be said that the Genestealers feel a lot easier to play. While the Space Marines have lesser units with lesser APs, the Genestealers numbers, mobility and straightforward objectives make playing them less complicated. Itâ€™s a lot more fun to overrun the Space marines with Genestealers.

While these dynamics of the two sides feel just right and challenging to the tactical strategist, Space Hulk: Tactics throws at your another interesting wrinkle in the Space Hulk formula, cards.

Space Hulk: Tactics includes a card mechanic that involves unlocking new cards to your deck and playing them to gain some minor buff or advantage during the tactical turn-based battles.

The cards arenâ€™t complete game-changers, often giving a small buff such a +1 to attack or guaranteed success for the next melee attack. 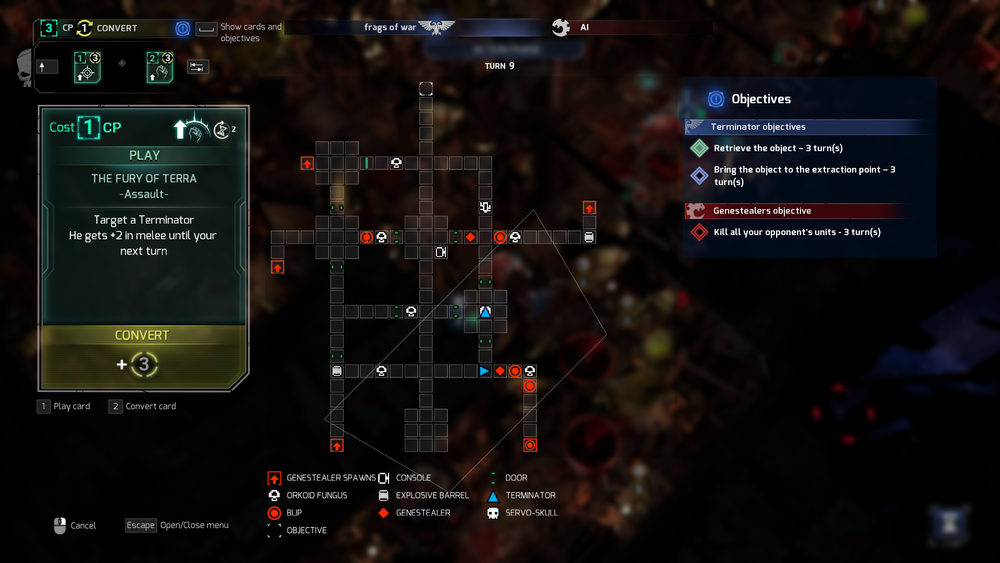 While I never felt the cards were overpowered and could completely tip the balance of a game, they were quite useful when I found a particular card perfect for the situation I was in. Getting a guaranteed melee card when I had a Terminator just a couple of tiles away from a group of Genestealers is a niceâ€¦ added insurance.

Even if you found none of the cards useful, there is always the option to convert cards, one per turn, to gain a little additional APs. Now, this can be the difference between life and death.

Having enough AP to turn on overwatch saved my terminators countless times. Itâ€™s moments like these that define Space Hulk: Tactics. When you survived just by a hair against the odds.

Space Hulk: Tactics may just be one of the better modern video game adaptation of the Space Hulk board game. Its edge of your seat tactical challenges that require intense consideration of all options is incredibly satisfying if you could pull it off successfully.

However, itâ€™s not a game thatâ€™s made for everyone. The randomness of the game or dice roll-based RNG might frustrate some gamers. If you do not like RNG mechanics, there are lots of times Space Hulk: Tactics will punish you even when the odds favoured you.

Things can come down purely on the luck of the dice roll despite your tactical mastery. If the dice rolls donâ€™t favour you, thereâ€™s really nothing much you could do.

It is undoubtedly something that the game inherits from its board game roots. If you recognise this and appreciate challenging games, then Space Hulk: Tactics becomes a lot more palatable.

Youâ€™re going to have to calculate every single tactical option and the opportunity costs of them to make the right tactical decisions. And you still may not succeed. It also doesnâ€™t help that save scumming (thatâ€™s the practice of saving a game in specific points, and reloading when things donâ€™t go your way), doesnâ€™t work. Iâ€™ve tested this out multiple times and the outcomes of attacks do not change past the first time you play them. Reloading repeats the same outcome.

If youâ€™re fine with luck and randomness playing a role in your tactical games, Space Hulk: Tactics is a pretty good and challenging game.

Reviews
Nanotale: Typing Chronicles Tries To Be Unique, But Comes Off As A Tryhard

Platform: PC Genre: Typing RPG If you miss games like Typing of the Dead and need a PC title that's a tad longer in the tooth, you may want to che...