Should You Really Pay US$59.99 For Earth Defense Force 5?

The Earth Defense Force games are meant to cater to a certain budget and type of gamer. The kind who wants to experience cheap B-grade shooting thrills without the nuance and polish expected from a high-profile studio. There’s a reason why they’re in D3’s “Simple Series” back in 2003 during the PS2 era: they’re supposed to be cheaply-made games meant to kill your time.

Apparently the Earth Defense Force (ChikyÃ» BÅeigun in Japan) series pit you as a lone soldier who has to mow down a ton of bugs and aliens, either on foot or a mecha. There’s no weight in handling your playable character: they jump, attack, and fight like your standard 90s video game protagonist.

That’s part of the charm of the EDF games: they justify their simple design and budget presentation with a campy delivery and an ode to action games and B-movies back in the day.Â Fast forward to today, and now we have an English version of the campy B-grade action game, now on its fifth mothership (heh) release. 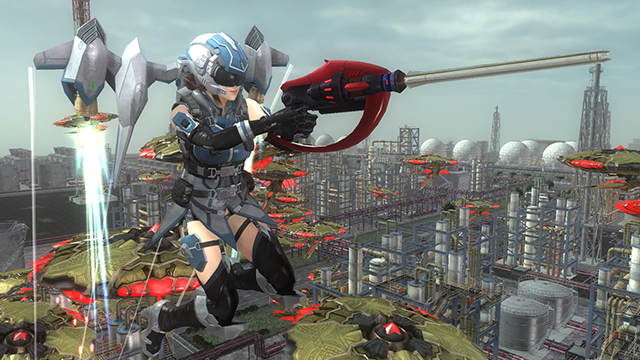 Is Earth Defense Force 5 the same campy shoot-em-up fest we knew and love that’s also tweaked for today’s generation of gamers? Yes; there’s a heckaton of joy in just blasting giant ants, spiders, giant anthropomorphic frogs with rocket launchers, and spaceships without worrying about taking cover and ammunition count, arcade shooter style. EDF 5 fills in that much-needed arcade void that’s sorely missing in this day and age, and at the very least handles that competently.

The online co-op mode is pretty stable provided you can find like-minded shooter fanatics who like to keep their gaming diet simple and basic. The game throws everything at you; it’s up to you and your pals to sort out the mess with your class and available weapons.

Does it still look like an up-rezzed PS3 game? Yes, but that’s part of the game’s goofy aliens vs humans charm. Seeing mutant ants and spiders break apart amidst the debris of wrecked ships using the most standard of game physics in an action game has a certain nostalgic-yet-goofy feeling to it.

Does it cost as much as a new PS4 game? Yes, and herein lies the problem. The current price as it stands is anything but cheap especially given the series’ budget and old-school lineage. I’m guessing due to the game’s cult status it’s getting away with such a price tag.

But really, that may be enough to make people think twice about getting on board the madness that is the EDF series. And really, I want nothing more than more people experience its goofiness and absurdity. 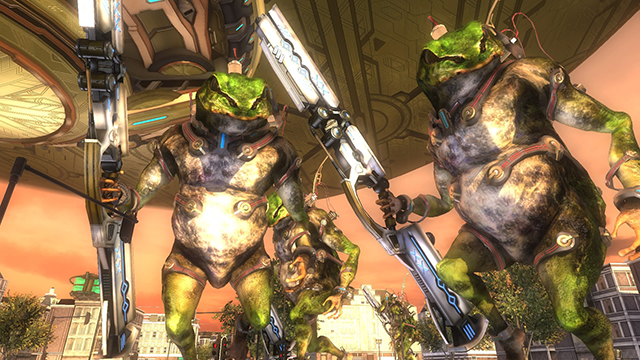 On the flipside though, EDF 5 adds a lot of improvements from the past games. The controls are alright, with good targeting, weapon-switching, and decent evasion techniques. The four classes here are fun to play around with.

If you’re straight-up old-school shooter style, just pick either the Ranger with his rifles & rocket launcher or the Wing Diver with her jetpack and rapid-fire close-range guns. If you want to support or be the suppressing fire guy, go for the Air Raider and Fencer. Each of these classes plays how you expect them to play; they’re not groundbreaking characters to play as, but they get the job done in this bug hunt. If you need a challenge, you can bump it up to the hardest once you’re done with certain missions and ramp up the damage scaling.

My advice? Wait for the price for this bad boy to go down if you’re new to the EDF series and want to give this crazy franchise a go. Otherwise, dig in and see how a Hell Comes To Frogtown sequel with kaiju frogs would be like.

-Price tag is absurd.
-A bit too simple; an acquired taste for many.

Reviews
Is Gears Tactics A Great XCOM Replacement For 2020?

PUBG Corporation has announced Team Deathmatch, which will be live with the upcoming Update 6.2 on PC, PS4, and Xbox One. It will be the first of many...

News,Reviews
Cookie Clicker Deserves All The Mouse Button Presses It Gets

Cookie Clicker is on Steam, Yes, the 2013 browser game is now an official PC paid game where all you do is click on a cookie for results. I wholehe...